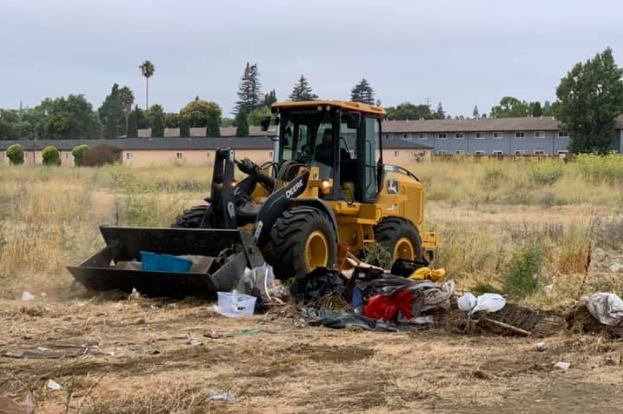 A tractor picks up debris and belongings left behind at a homeless campsite near Maxwell Bridge. 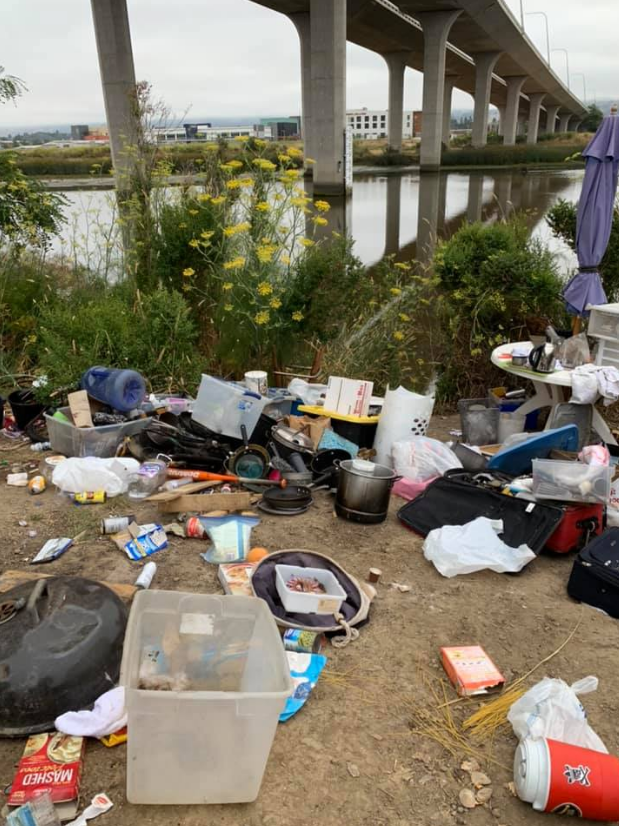 A tractor picks up debris and belongings left behind at a homeless campsite near Maxwell Bridge.

When public officials sweep homeless encampments, the people and their belongings don’t just disappear. They have to go somewhere.

The Napa Police Department posted on its Facebook page in late July that it aided the state Department of Transportation, or Caltrans, in a cleanup of encampments under the Maxwell Bridge. Social media commenters wondered: When camps are swept, what services are offered to inhabitants?

They’re offered services such as medical care, food, water, clothing, immediate mental health services, and detox and long-term care programs for drugs and alcohol, according to an emailed statement from Napa Lt. Brian Campagna. Housing services such as housing search assistance, landlord outreach and deposit assistance are made available.

Campagna said the city works with Abode Services, a charity that contracts with the county to provide services for the homeless population, ahead of sweeps. Abode’s outreach efforts were a major part of the reason that Christopher Collins, who camped throughout Napa for much of the past five years, said he began to take his life in a different direction in October.

“I kind of lost hope,” said Collins, who was contacted by the Register after he commented on a Caltrans site cleanup post on Facebook. “(Abode) gave me the hope that I could see the light at the end of the tunnel over the next six months.”

Abode did not return calls seeking comment for this report.

Homeless camping is illegal in Napa, but there’s only so much officials can do to enforce that law, Campagna wrote. He pointed to a U.S. Court of Appeals for the Ninth Circuit ruling in 2018 that held that officials can’t prosecute homeless people for sleeping on public property “on the false premise they had a choice in the matter.” Napa’s shelters run at nearly 100 percent capacity, Campagna wrote.

All known camps are visited by a Napa Police Department homeless outreach specialist, police officer and, if needed, a Napa County mental health clinician, he wrote. Campers’ vulnerability is assessed by the Vulnerability Index Service Prioritization Decision Assistance Tool, a standardized survey commonly used by homeless service providers to determine which people should be given priority for services.

Police move to enforce no-camping laws if the camp poses environmental or health hazards, and residents have not moved after several visits from public officials, Campagna wrote.

Officials post a notice 72 hours ahead of a sweep to give campers time to leave the area. Notices may be posted several times while a sweep date is coordinated.

The city doesn’t trash any personal property, unless the items are hazardous or unhealthy to store, Campagna wrote. Per state law, items are removed, kept in a secured bin for 90 days and discarded, if unclaimed. Police leave instructions for campers that explain how they can retrieve their things.

Napa Police participates in a relocation program that connects homeless people with family or friends, he wrote. For people with loved ones who are not in Napa, the city provides bus tickets and connections to services in the area to which the person will be going.

Collins, who was previously homeless in Napa, said camps he lived in were swept twice, in 2015 and 2017. He recalled returning to the site and realizing the city had all of his possessions. Collins said he never tried to get his things back.

He lauded the services available to local people without housing and said Abode Services has a strong outreach team. Abode helped him sign up for services, and get identification and Social Security cards.

Collins, a Napa native, said he had struggled with drugs for most of his life, lost his kids to Child Protective Services, got divorced and lost his house. Camping was freeing for a while, he said, but his new lifestyle allowed his drug addiction to take hold.

When he was ready to get clean and completed a 90-day drug and alcohol residential program at the McAlister Institute, Abode helped him pay to live in Serenity Homes of Napa Valley, a sober living home. Abode helped pay move-in costs at his current home and subsidizes part of his rent.

“It’s pretty much up to your willingness to accept the services,” he said. “A lot of people either don’t want to utilize them or change their life so that they can.”

Napa County supervisors heard just how fast local affordable housing opportunities are being gobbled up, with the almost-completed Stoddard We…