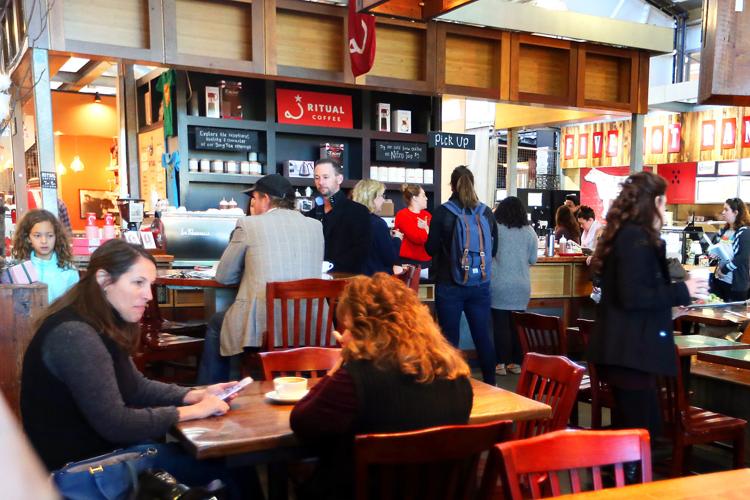 People gather near Ritual Coffee at the Oxbow Public Market. 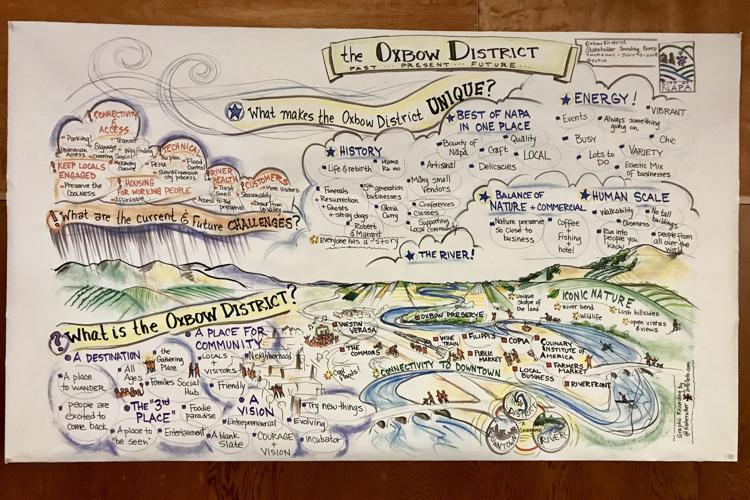 This schematic map provided by the Urban Land Institute to the Napa City Council illustrates the opportunities, challenges and goals of branding the Oxbow district east of downtown as a distinct destination for residents and vacationers.

What once was a simple bend in the Napa River has become the city’s newest visitor magnet, home of a food and wine center, a culinary market, restaurants and hotels.

But what exactly makes the Oxbow the Oxbow?

Finding an answer to that question formed the heart of a branding exercise Tuesday by the Napa City Council, which heard a team of advisers suggest ways to promote the once-sleepy area east of downtown as a destination on its own terms.

In plotting the Oxbow’s layout, development, transportation and even street life, Napa should keep the water – the namesake crook in the river – at the heart of the neighborhood’s identity, argued volunteers with the Urban Land Institute, a nonprofit urban-planning think tank working with the city. The report followed a meeting in July with local stakeholders in the Oxbow area, according to Peter Pirnejad, assistant city manager.

“The river needs to be seen and experienced in order to positively contribute to the character of this place,” Elizabeth Shreeve, an urban designer with the SWA Group in San Francisco and one of eight institute members to join the study on branding the Oxbow. “Think of the river not as the edge, but as the center of the district.”

According to advisers who visited Napa for their study, such a water-first outlook can be reflected in zoning that seeks to create easy access to the Napa River – including its recreational heart, the Oxbow Commons park and flood-relief channel – while ensuring new construction preserves views of the waterway rather than obscuring them. Planners also should be mindful of keeping open views out to the Napa Valley edges – a recent point of debate for multistory developments like the Black Elk hotel, which the Planning Commission endorsed last year for First Street west of the Oxbow Public Market.

Besides its unique riverfront setting, Oxbow also stands out for a diversity of older and smaller buildings, and an easily walkable streetscape that invites visitors to explore on foot and bicycle, advisers said. Jim Heid, founder of the UrbanGreen design consultancy in San Francisco, encouraged the city to keep and promote such low-slung building stock – with the potential of fostering small and start-up businesses – as a contrast to hotel high-rises like the Andaz and Archer that now anchor the downtown area on the opposite side of the river.

Even public events sponsored by Napa can add to the Oxbow’s river-friendly image, added Blaine Merker, managing director of the Gehl urban design firm’s San Francisco office. Annual festivals such as the city Earth Day celebration, Bike Fest and the Walk for Animals have moved to the district, but a steady flow of small-scale events would keep residents engaged in the river’s future, he said.

“Preserve the river by loving it,” said Merker. “Let people get close; they’ll take care of it.”

Despite the growing number of Oxbow visitors, according to the advisory team, some roadblocks to its popularity remain – some of them as imposingly physical as the streets and bridges separating the district from the rest of Napa’s core.

Napa needs to ease access into the Oxbow and especially across the First Street bridge linking it to downtown, said Edith Ramirez, a project adviser who serves as economic development director in the South Bay city of Morgan Hill. A long walk over the First Street bridge and across four-lane Soscol Avenue dissuades some would-be visitors, who would be well-served with benches and shade structures along the bridge’s sidewalks to make the journey more pleasant in summer, she told the council.

Pathways into and through the Oxbow also need better and more eye-catching signage, added Sandra Kulli, a Malibu-based real estate marketing consultant. “I went over the (Soscol Avenue) bridge 18 times, and never once did I have an idea there was a cool trail underneath,” she said of her Napa visit, urging the city to “name it, sign it and use it” to capture the attention of residents and visitors.

Concept signs shown to the council Tuesday featured a square logo, in various colors, stylizing the Oxbow as the reverse-C formed by the Napa River’s meandering course.

Even as demand for parking has increased in the heart of Napa in the last four years, the number of citations for exceeding time limits has fa…

Survey: Gen Z and Millennial drivers have a complicated relationship with their cars

Survey: Gen Z and Millennial drivers have a complicated relationship with their cars

People gather near Ritual Coffee at the Oxbow Public Market.

This schematic map provided by the Urban Land Institute to the Napa City Council illustrates the opportunities, challenges and goals of branding the Oxbow district east of downtown as a distinct destination for residents and vacationers.