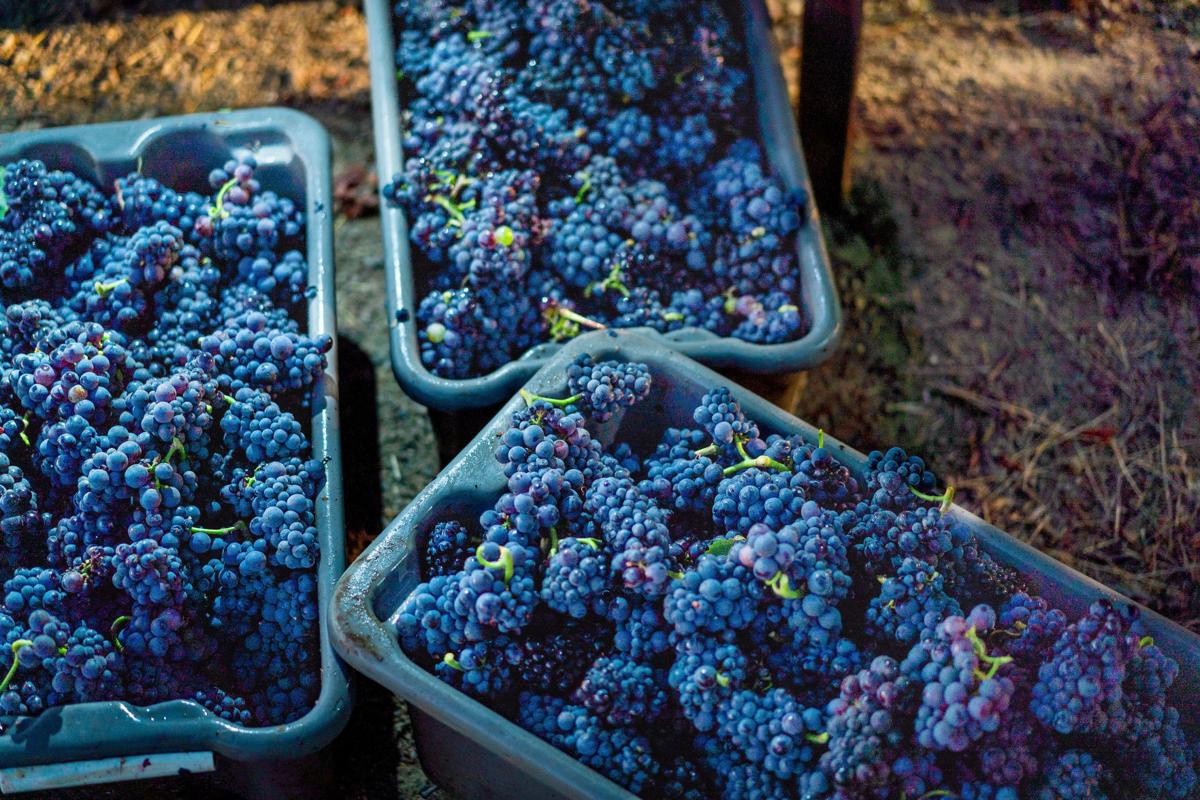 Pinot Noir grapes are harvested to be made into sparkling wine for Mumm Napa Valley in 2019. Grapes grown in Napa command the highest price of any grape-growing region in the state of California, according to data from the U.S. Department of Agriculture. 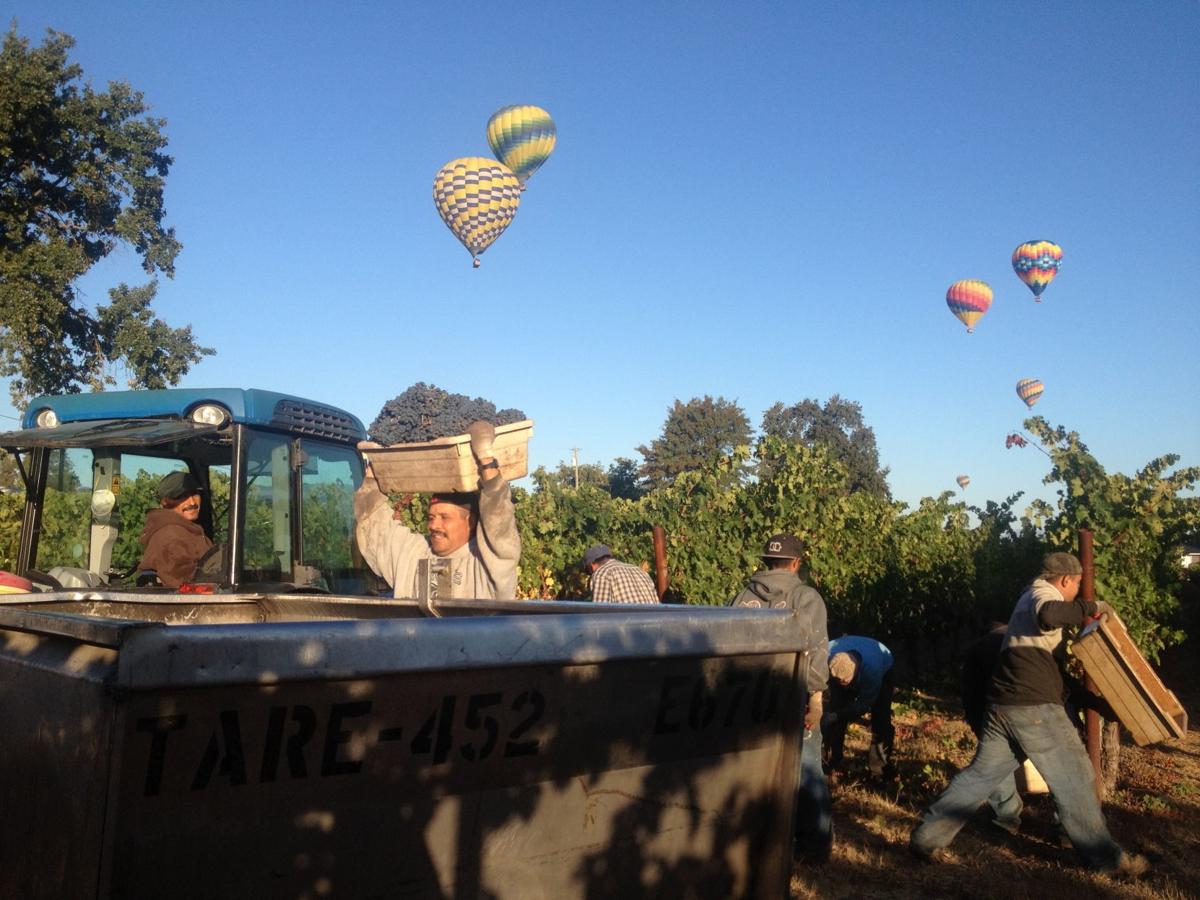 Scenes from harvest in 2016. The value of a ton of Napa Valley grapes shot up in price through the mid to late 2010s - a phenomenon Rob McMillan says was largely manufactured by the wine industry overestimating forecasted growth.

Napa Valley-grown grapes went for an average of $5,524 per ton in 2018 – almost twice as much as those grown in Sonoma County, where that same ton went for $2,792, and more than three times than those grown in nearby Mendocino County, averaging $1,668 per ton.

Those figures mark a substantial boom in value for Napa, especially considering the three counties were almost neck in neck in the price of their grapes less than 30 years ago. In the early 1990s, a ton of grapes from both Napa and Sonoma counties went for just under $1,000, and for $750 from Mendocino County.

The median price of Napa Valley wine grapes has exploded over the last three decades, save a few dips caused by the Great Recession and oversupply. Data from this year’s Silicon Valley Bank state of the industry report shows the median price for a ton of grapes from Napa as having increased more than sixfold, from just under $1,000 per ton in the early 1990s to about $5,500 where it sat in 2018. And some valuable varietals went for far more than that— both Cabernet Franc and Cabernet Sauvignon sold at about $8,000 per ton in 2018.

In Sonoma County, competing closely with Napa in the 1990s, the price of a ton of grapes has been stagnant at just under $3,000 for the past four reporting years.

So, what’s a name worth for Napa Valley? In 2018, an average of 302% percent more value for red varietals and 140% more value for white varietals as compared to other California wine grapes, according to data from the United States Department of Agriculture.

Growth has been in especially explosive specifically in Napa over the last decade; grapes almost doubled in value from 2011 to 2018, the most recent reporting year. Rob McMillan, author of Silicon Valley Bank’s state-of-the- industry report, says those conditions were in part manufactured by the wine industry.

“Grape prices trending higher over the last decade should indicate some combination of an emerging supply shortage or demand increase, but neither is the case,” McMillan wrote in the report, referring to prices for Napa, Sonoma and Mendocino counties. “The gradual price raise starting in 2011 was due to overestimated sales growth forecasts by the wineries.”

Still, price increases in the last 30 years do have their roots in market trends. Napa’s grape growers were forced to undergo a massive replanting after disease struck almost the whole of the valley’s vineyards in the late ‘80s and early ‘90s. The wine industry in its modern form had only begun 15 years earlier, and “everything (was) planted in the wrong places,” McMillan said in an interview.

“We had Cabernet planted in Carneros and Riesling planted in Calistoga,” McMillan added. Carneros today is known for its Pinot Noir and Chardonnay; Calistoga, on the other hand, grows varietals like Cabernet Sauvignon and Petite Sirah. Growers had a chance to correct their plantings.

“That’s really when Napa Cabernet was born, because the consumer discovered the consistency of the product after everything was replanted,” McMillan said. “They said, ‘Wow, this Cabernet is good, it’s from the Napa Valley.’”

John Hughes, owner of the Napa-based H. & H. Wine Brokerage, joined the wine industry in 1999; he’d heard talk that it was the 1997 vintage, a particularly well-received crop year, that began to set Napa apart from neighboring regions. The industry’s marketers and advocates took that reception and ran with it, Hughes said.

“I’d been at grape growing associations where Andy Beckstoffer would speak, and he was very clear that Napa growers could not allow prices of their retail wines to go below (neighboring) pricing,” Hughes said, naming one of Napa’s most famous growers.

That’s due in part to Napa’s predisposition to growing high-quality fruit – the Mediterranean climate is incredibly beneficial, as is the valley’s varied, fertile soil, Stults said.

Those characteristics make Napa an ideal place to grow Cabernet grapes, according to Hughes. And because Napa is a relatively small county – Sonoma County is more than twice Napa County’s size – product produced in the valley does tend to be more consistent.

So it begins with nature, Stults said, but he still points to marketing done by organizations like the Vintners.

“We operate with the goal of driving awareness and demand of Napa Valley wines all over the world,” Stults added. Most of the group’s 30-person staff is dedicated to marketing; the organization has a global network of contractors selling Napa Valley wine. They’ve also fought to protect the integrity of the Napa name, putting legal barriers in place for Napa impersonators whose product might muddy the valley’s reputation.

The future of the market is uncertain. The North Bay’s wine industry is facing a grape glut following a dip in demand for wine and a historically large harvest in 2018. That same year may very well may have been Napa’s price peak; Hughes doesn’t see grape prices rising above $6,600 any time soon. The industry created a high-pricing bubble for itself – now it’s deflating.

Hughes has seen McMillan’s state-of-the-industry predictions come to fruition; on the bulk wine market, for example, Napa Valley Cabernet was going for the equivalent of $3,200, less than half of its average market rate. And on the spot market, for last-minute purchases, Hughes saw prices as low as $1,200 per ton. He said he thinks prices will settle somewhere around $4,000.

“What’s happening is that the price of wine as far as dollars being spent on it is maintaining, but the volume of wine sold is down,” he said. “And that’s really troubling for growers, because you sell grapes in tons – volume, not dollars.”

Sunisa Lee's father after gold: 'Is this real?'

Sunisa Lee's father after gold: 'Is this real?'

This year saw some Napa Cabernet Sauvignon grapes sell for a fraction of the market rate. Here's why.

For Napa's wine industry, 2020 marks the beginning of an era of change

Area wineries fear they will become collateral damage in an escalating trade war between the U.S. and France.

Is the average price per ton of Napa wine grapes $5,798? Experts question the state grape report.

Letters: Wonder if there an alternative "cash crop?"

Pinot Noir grapes are harvested to be made into sparkling wine for Mumm Napa Valley in 2019. Grapes grown in Napa command the highest price of any grape-growing region in the state of California, according to data from the U.S. Department of Agriculture.

Scenes from harvest in 2016. The value of a ton of Napa Valley grapes shot up in price through the mid to late 2010s - a phenomenon Rob McMillan says was largely manufactured by the wine industry overestimating forecasted growth.