What was an actual black bear (not the diner) doing in urban Napa on a Friday night?
Share this
{{featured_button_text}}
1 of 4 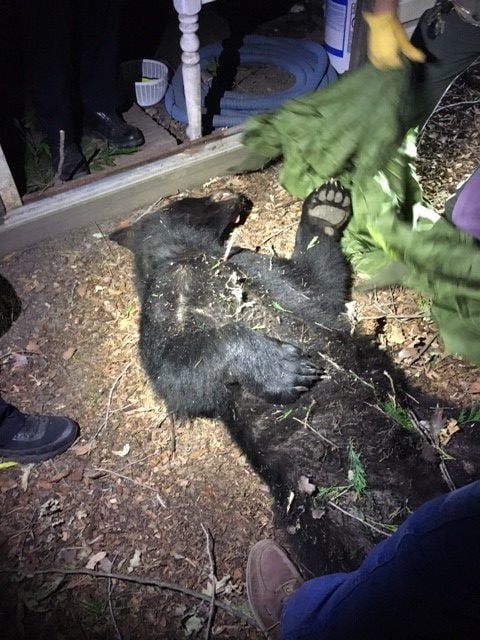 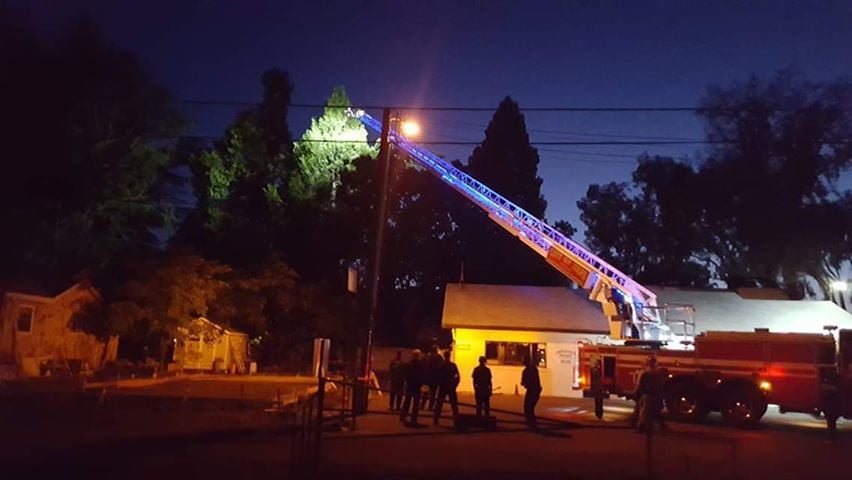 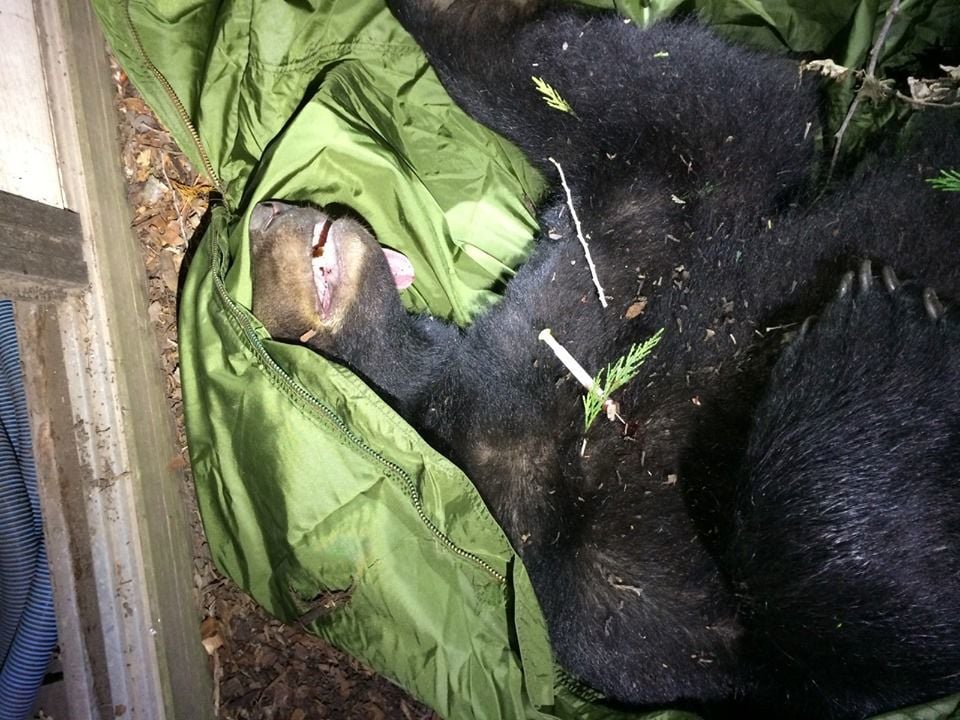 The black bear that took up temporary residence in a tree in the middle of Napa on Friday night had to be just as shocked as neighbors were at the sight of the other.

“It was pandemonium,” said Conrad Jones, a California Department of Fish and Wildlife scientist who was called in to relocate the bear.

With so many excited people gathered around a wild animal, “it was not a good situation” for either the bear or the public, said Jones.

The bear was first spotted on Beard Road and ended up further west in a tree located east of the Pinecrest Apartments on Cooper Court, near Jefferson Street and Pueblo Avenue.

“For the most part, he seemed to be just hanging out,” said Erik Mortimore, a Napa City Fire Department captain who was called to the bear incident.

But they couldn’t just leave the bear there, hoping he’d climb down and head back wherever he came from. For one thing, a crowd of 60 to 100 people had gathered around, said Mortimore.

“If he decided to come out of the tree, what would happen?” It’d be dangerous for both the public and the bear, he said.

The bear had shown no signs of aggression, but the animal was frightened, and clearly “lost and in the wrong place,” said Jones, the wildlife scientist.

A frightened animal wants to get as far away from humans as it can, which explains why it climbed higher and higher into the tree. “It wants peace and quiet and you out of its life,” he said.

Tranquilizing the bear with a dart was determined to be the safest option for all involved.

It’s not easy to successfully tranquilize a bear, Jones noted. You can’t just shoot it anywhere on the body.

“Ideally you want to get it in the rump or the front shoulders,” he said.

The bear was hiding about 40 feet up in the tree. It was dark. The danger of a dart ricocheting off the bear or the tree was real. “A ricocheting dart will put that bear to sleep but it could kill a person.”

While on the ladder, Jones was not trying to talk to or calm the animal in any kind of “bear whisperer” way.

He said he believes that his third shot made contact with the bear.

Branches and other obstacles including an aluminum shed broke the bear’s fall, “which I think worked in its favor,” said Jones. Without that, “I don’t know if he would have made it.”

Once the bear landed, “We immediately whisked it away in a secure container” to a fish and game office on Silverado Trail. Finding no injuries, Jones then transported the bear to an undisclosed location — on department and fish and wildlife property and away from Napa Valley — where it was released.

Two hours and six minutes after it was hit with a dart, the bear was safely returned to nature.

Jones said he’s not a bear biologist, but he believes the animal was an adult, perhaps 5 years old, and weighed more than 200 lbs. From a police department photo, the bear looked to be at least 5 feet tall. The bear was not tagged and did not wear any kind of radio collar.

He doesn’t know if the the bear is male or female.

Its fur was coarse and about 3 inches long. Jones said the bear smelled kind of like a wet dog but with a stronger musky scent. He estimated that the bear’s claws were about 1 inch in length.

“You wouldn’t want to get swiped by them.”

He doesn’t know what compelled the bear to visit Napa. It could have traveled along the river, unknowingly entering an urban area, the scientist said. It’s possible that wildfires have impacted how wildlife travels and lives in rural areas.

“We seem to be seeing bears a little further south than we had historically,” said Jones.

Perhaps the bears are reestablishing in an area they were always in to begin with. A bigger bear could have forced this bear out of its territory. Or, this bear may have been following its nose to some kind of food source.

Other bears and wildlife have recently made appearances in other cities including Santa Rosa. Jones is the same scientist who recently tranquilized a mountain lion with a dart at a Santa Rosa mall. On Tuesday, a bear was spotted climbing a tree on the campus at the University of California, Davis.

Is the Napa bear likely to come back to Napa?

“I forgot to ask him,” Jones said dryly.

However, bears have been known to return to city areas, he said. “Wildlife have done crazier things. The hope is that it won’t.”

But how does a wild bear end up in a residential neighborhood in the middle of Napa?

“They find a way,” said Jones. “They are not following our playbook. It’s both frustrating and fascinating and almost inspiring.”

If locals come upon another bear in the city, “keep your distance,” said Mortimore. “Give them space. Don’t approach them and of course call 911.”

According to the California Department of Fish and Wildlife, California's black bear population has increased over the past 25 years.

Adult females weigh 100-200 pounds whereas adult males are larger, at 150-350 pounds, though individuals over 600 pounds have been taken by hunters in California.

Black bears have five toes, each with a well-developed claw, on both front and hind feet, and teeth adapted for feeding on both plant and animal matter.

Black bears are good climbers, and they will quickly scale a tree to avoid a predator if they cannot outrun it.

Police: Bear rescued after being stranded in tree on Napa street

Police, firefighters and state wildlife officers joined forces Friday evening in Napa to rescue a bear that became stranded in a tree for seve…

THA BAK, Laos - He was up there somewhere, at the top of the hill, the man Karl Ammann had come to see. It would soon be night. The forest was…

Bear cubs found by California highway may have been poached

The end of fur trapping in California? Bill seeks to shut down a dwindling industry

A bill submitted to the state Legislature on Thursday seeks to close the book on a centuries-old livelihood and vestige of old California: com…

LOS ANGELES — Like many urban singles, the mountain lion P-22 lives a solitary life in a too-small habitat. And he has a hard time finding a m…

A woman punched a mountain lion and tried to pry its jaws open to save her dog from an attack.

Winter's cold temperatures may bring unexpected guests to your house. Here's how to deal with them humanely.

A mountain lion was spotted in a central Napa neighborhood on Saturday. There are witnesses and a video to prove it.