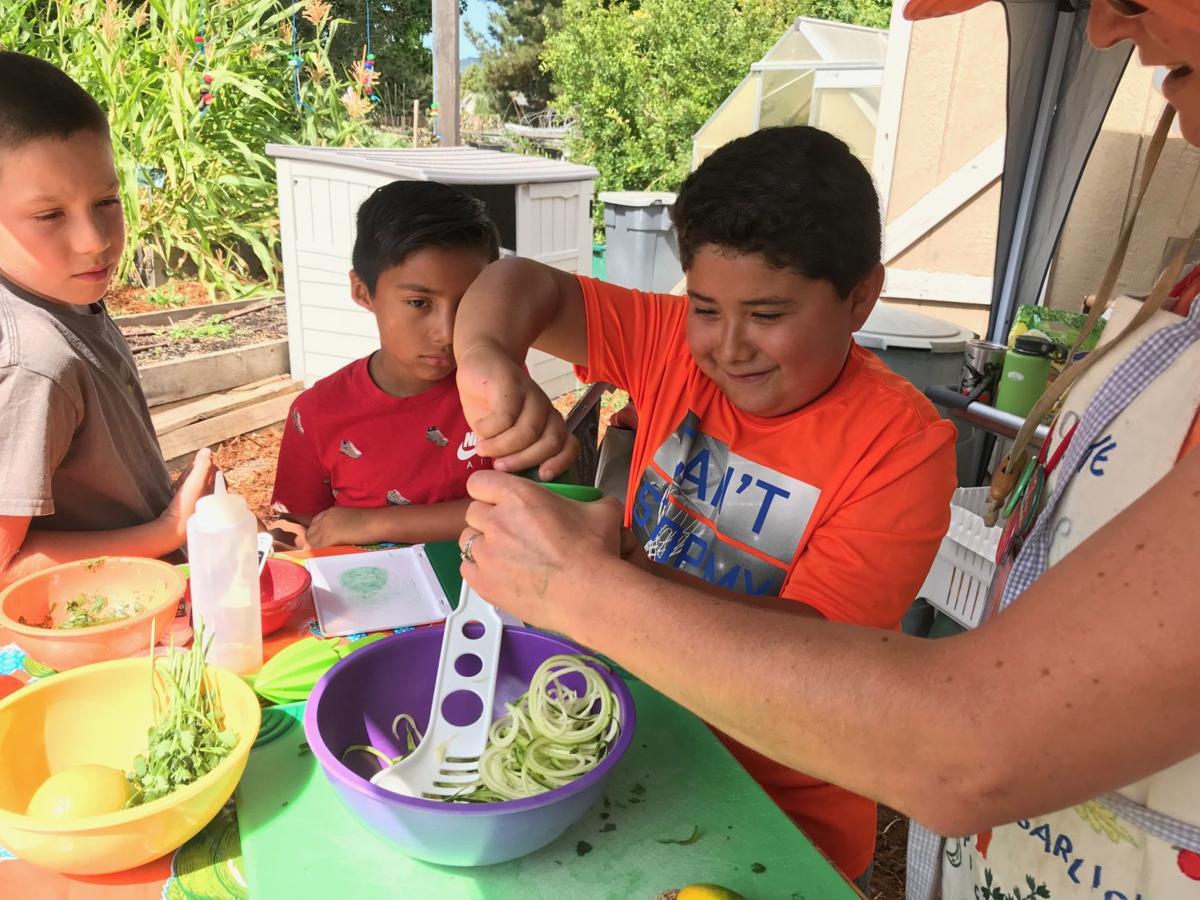 Pueblo Vista students make "zoodle" noodles from zucchini grown in Napa school and other gardens. The activity was part of a new collaborative pilot program called the Z Project. 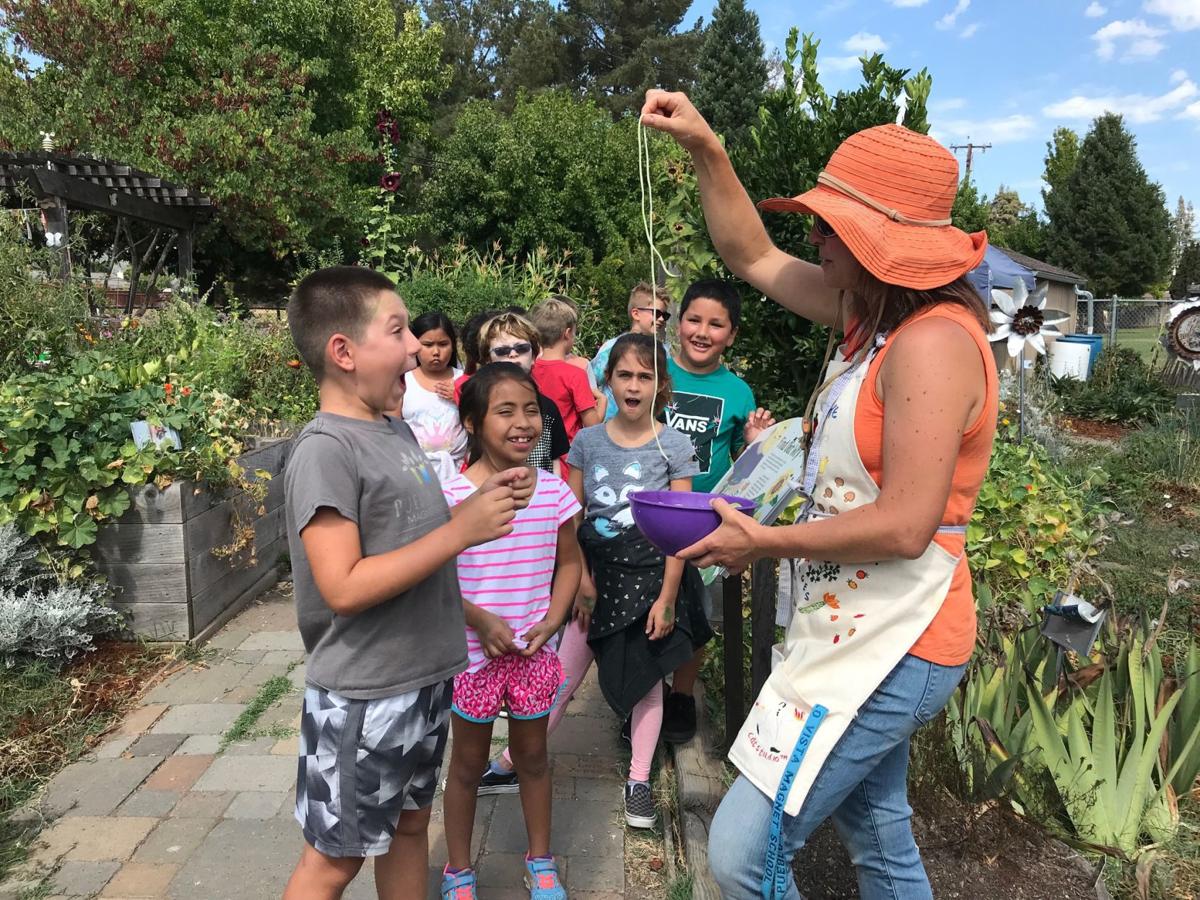 After making spiral "zoodle" noodles from zucchini, NVUSD teacher Carrie Strohl gives each student a noodle to taste test. Some of the noodles were quite long which amazed the students.

The third-grade students at Pueblo Vista Magnet School had a decision to make on Wednesday. Which was better – raw or cooked zucchini bites?

What appeared to be a simple contest actually had a deeper purpose. The students were being seduced to become more accepting of vegetables.

One by one, each student selected a small piece of the veggie from bowls to taste test.

“The cooked ones didn’t really have a taste,” said Knox Van Emst.

After tasting, the students each took a turn making “zoodles” or spiral “noodles” made from zucchini.

“I’ve had zoodles before,” said Knox Van Emst. “I love them.”

“I’ll tell my grandma” about zoodles, said one student. “She’s always into vegetables.”

“Zucchini power!” shouted another student, who had stamped a zucchini-shaped stamp onto his arms.

The veggie sampling was part of a new collaborative pilot program called the Z Project.

“The aim is to entice more students to eat school lunch every day because it is tasty and nutritious,” said Carrie Strohl. She’s a Napa Valley Unified School District teacher primarily based at Pueblo Vista. In 2018, she also founded the School Garden Doctor nonprofit.

The zucchini project is also a partnership with The School Garden Doctor, the Napa Valley School Garden Network and Napa Valley CanDo. Organizers hope to grow the Z project and turn it into a larger garden-to-cafeteria effort in Napa.

After growing zucchini at the school sites, at the CanDo Food Bank Garden and other community garden spaces, the zucchini will be will be prepared at the new NVUSD central kitchen for lunch on Sept. 12.

The School Garden Doctor used funds from a Whole Kids Foundation grant to supply the seeds and fertilizer. Each site supplied its own space, soil, water and labor. NOSH will buy the produce from the gardens for fair-market price on a per-pound basis.

The goal was to harvest a total of 800 pounds of zucchini. That’s enough to feed a two-ounce portion of zucchini on Thursday to the estimated 5,000 NVUSD elementary students who typically eat a school lunch, officials said.

With the Z Project, eight local schools grew zucchini in school gardens and are now harvesting their bounty.

“It’s really exciting because it’s giving them an opportunity to get familiar with nutritious food but by approaching with curiosity and wonder rather than being told you have to eat this because it’s healthy. They get to choose. It’s their decision.”

“It’s important that kids are involved in learning about food and how it’s grown,” said Food Service Director Brandy Dreibelbis. “They need to know where their food comes from.” And by having such taste tests, it gets students used to trying new things that the cafeteria serves.

“This is the best,” said Strohl.

“Tastings are an integral part of exposing students to fresh fruits and vegetables, especially when prepared in ways with which they may not be familiar to kids,” said Strohl. “Hopefully, when kids see the same items in the cafeteria, it increases the appeal of school lunch.”

Plus, “It shows how fun it is to be in the garden.”

Studies show that being in nature for even 20 minutes a day can relieve stress, said Strohl. Students need that release, she said, and not just from recess.

Working in a garden also promotes healthy eating habits, a better connection with nutrition and environmental literacy, she noted. “Kids need to experience nature firsthand” to get that connection.

The making of a first-year Napa teacher: Part 2

Adan Arroyo is not the kind of teacher that stands still.

The making of a teacher: New Napa educator marks the end of his first year

It’s been a year of firsts for Adan Arroyo. This brand new Napa teacher started his first teaching job in a first grade classroom at Pueblo Vi…

Editor’s Note: Napa Police investigators say that the initial payment to the school district did not come from the youth’s savings account as mother Kylie Kirkpatrick claimed, but was rather raised by the mother using crowdfunding accounts, according to court documents.

Anyone can eat a zucchini. At Bel Aire Park school, students race them.

Editor’s Note: Napa Police investigators say that the initial payment to the school district did not come from the youth’s savings account as mother Kylie Kirkpatrick claimed, but was rather raised by the mother using crowdfunding accounts, according to court documents.

Pueblo Vista students make "zoodle" noodles from zucchini grown in Napa school and other gardens. The activity was part of a new collaborative pilot program called the Z Project.

After making spiral "zoodle" noodles from zucchini, NVUSD teacher Carrie Strohl gives each student a noodle to taste test. Some of the noodles were quite long which amazed the students.