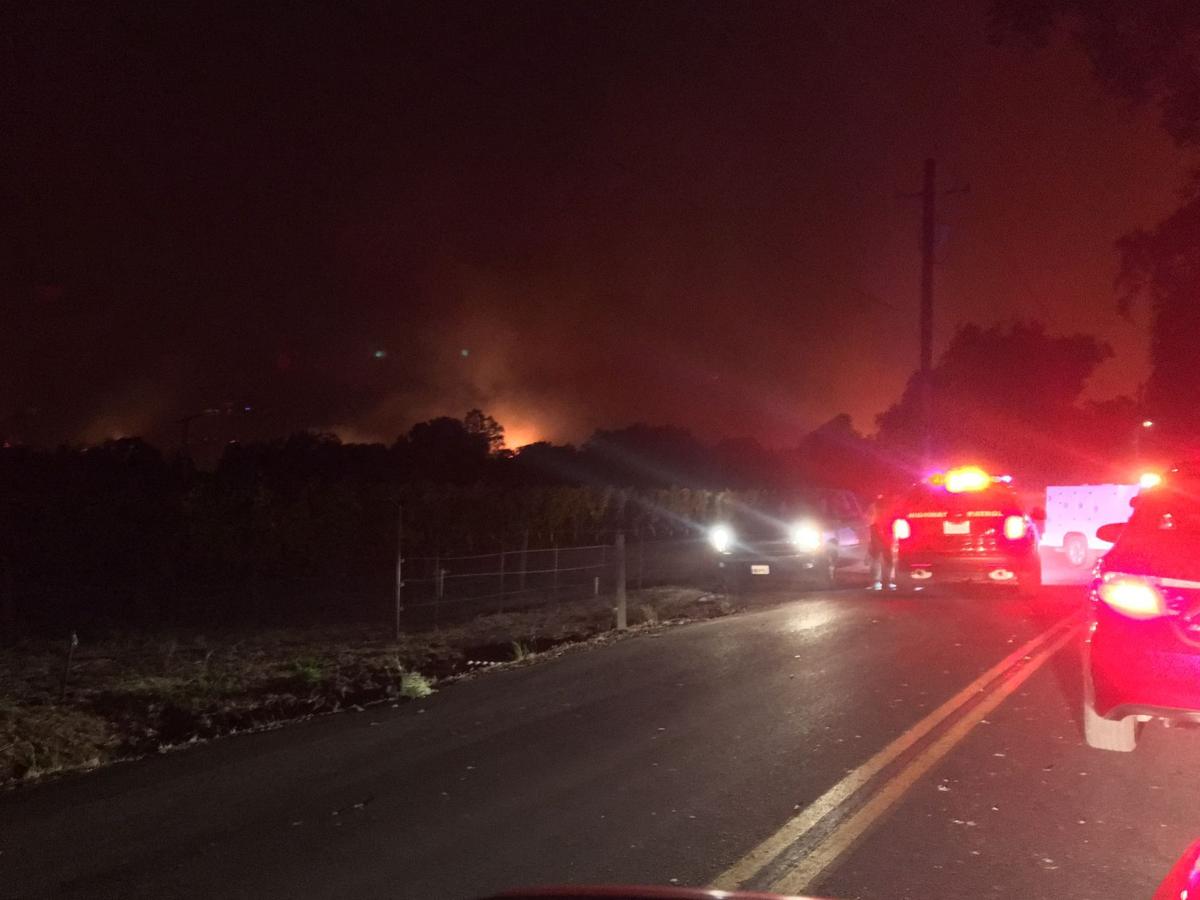 The hillside on Atlas Peak Road glows from the wind-swept fire that has prompted night evacuations on Soda Canyon Road and Atlas Peak areas. 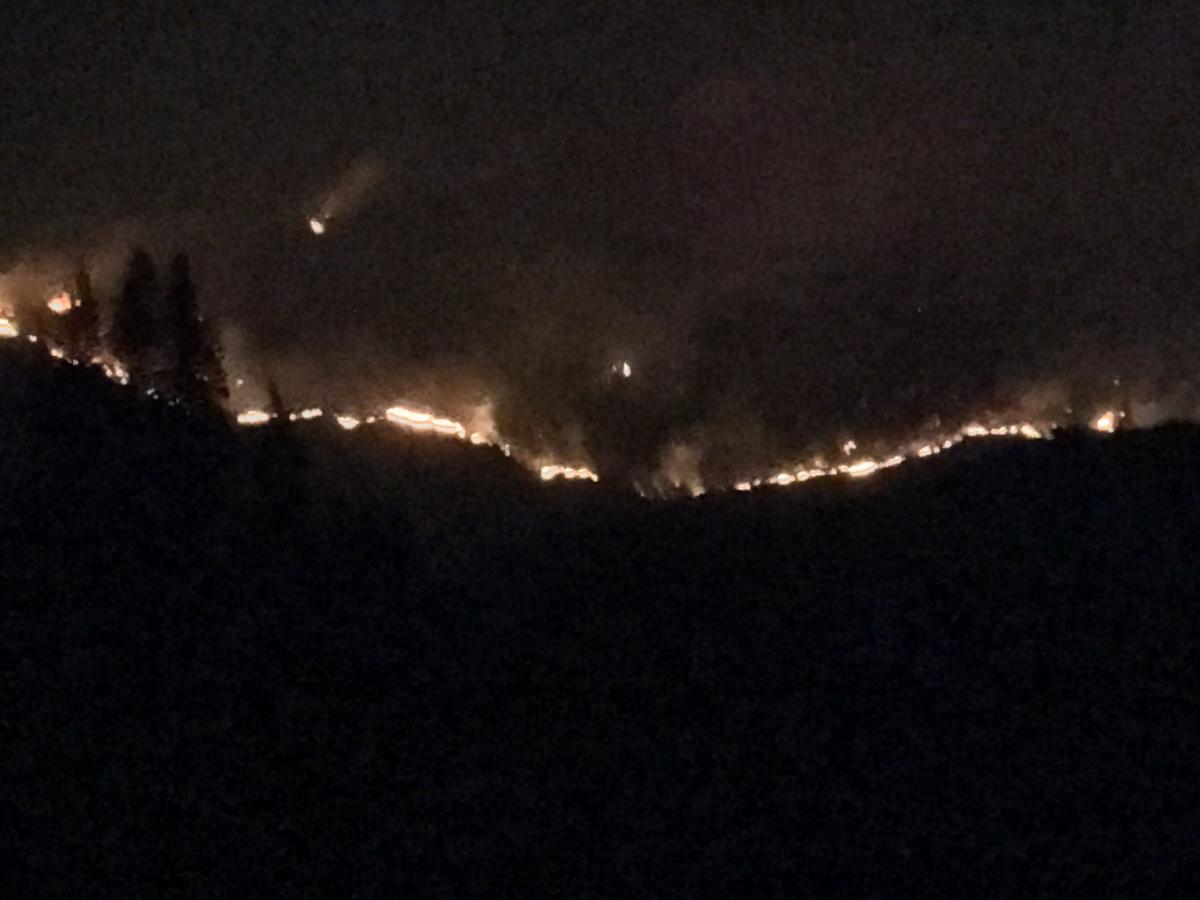 This is the fire burning on Atlas Peak at 2 a.m. as viewed from Yountville Cross Road. 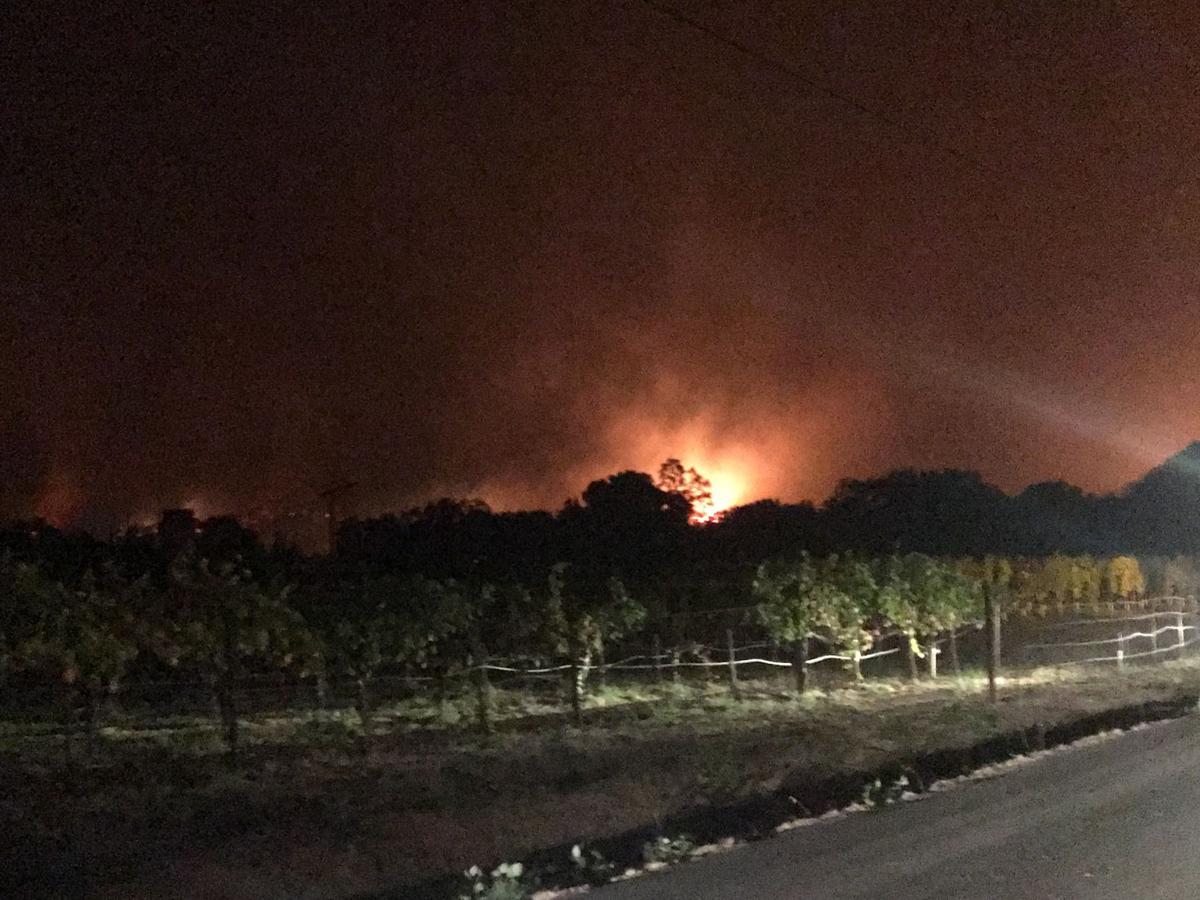 Flames on Atlas Peak as seen from the valley floor at 1 a.m. Monday. 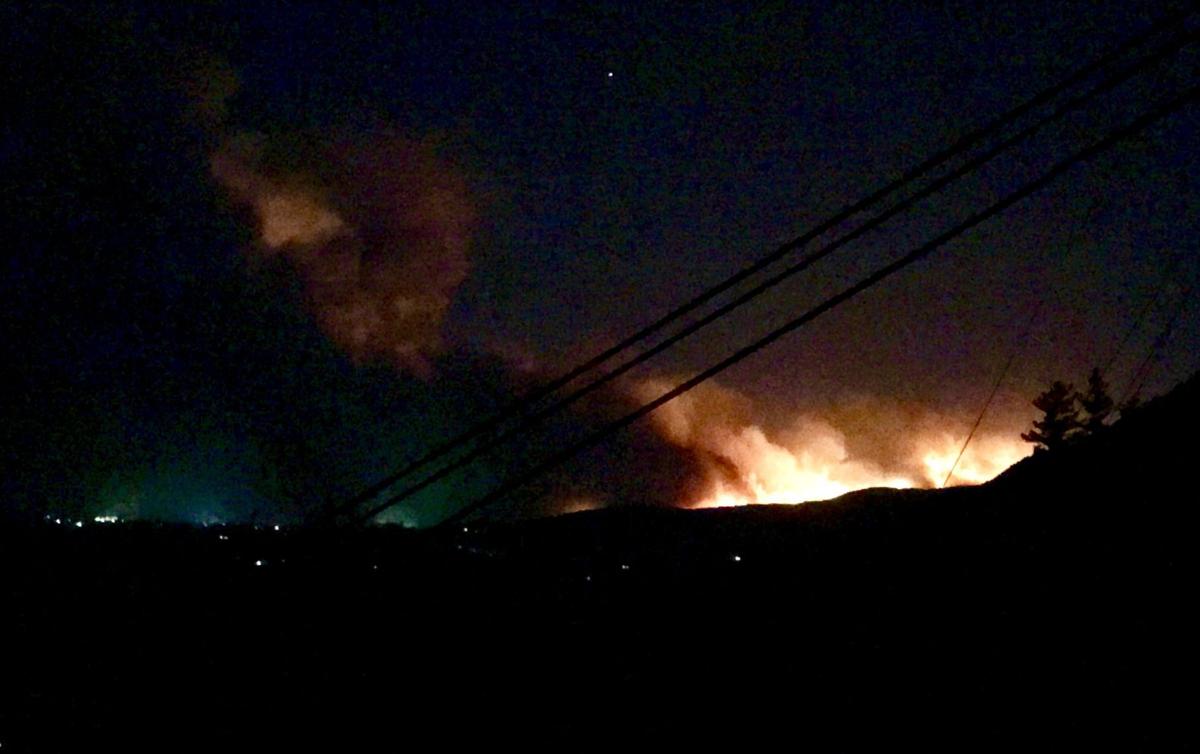 The fire as it appeared in Coombville early Sunday morning, prompting evacuations.

Napa County endured a hellacious night of wind-fed wildfires that prompted scores of neighborhood evacuations in Napa and Calistoga, sending hundreds of people to shelters and closing all public schools in Napa County, including Napa Valley College, on Monday.

Fanned by strong wind gusts, major fires burned all night in the Atlas Peak and Partrick Road areas, as well as on the outskirts of Calistoga, with flames lighting up ridgelines, dumping acrid smoke and ash into the Napa Valley.

Cal Fire said Monday that the Tubbs Fire, that started in Calistoga and burned into Sonoma County, has burned 25,000 acres as of late Monday morning.

The Atlas Fire off of Atlas Peak Road has burned an estimated 25,000 acres as of 11:30 a.m. as it continues to move south toward Solano County, while the smaller Partrick Fire had consumed 3,000 acres, Cal Fire said.

The number of structures that burned couldn’t be immediately tallied. Public safety officials said their first priority was to clear people from the fires’ paths.

Cal Fire reported shortly after midnight that it had ordered 24 strike teams from as far away as San Francisco to try to deal with the multiple blazes in Napa County. Air support would be available once daylight came.

The Napa evacuation center at CrossWalk church on First Street filled by 4 a.m., prompting officials to open up the Napa Valley College gym for the overflow. The Napa County Fairgrounds in Calistoga was opened for Upvalley evacuees.

Public schools from Calistoga to Napa announced Monday closures because of the unprecedented nature of so many fires ringing the Napa Valley, prompting so many people to flee their homes. Justin-Siena High School in Napa announced that it was also suspending classes for the day as well, as is First Christian School. NVUSD athletic events will not be held.

The first major fire began after 10 p.m. in the Atlas Peak area. It burned south, initially prompting evacuations around Silverado Resort, then later in the Vichy Avenue/Hagen Road area, followed by Coombsville and Wooden Valley areas as well as Montecito Boulevard and Monte Vista Avenue inside the city.

On the west side of Napa, a fire on the 3000 block of Partrick Road lit up the western sky and prompted more evacuations as it burned toward the city of Sonoma.

A separate fire near Henry Road resulted in the evacuation of 200 people from The Carneros Resort and Spa and adjacent rural areas.

In Calistoga, a blaze west of the city closed Highway 128, prompting evacuations all the way west to Santa Rosa. Voluntary evacuations were requested along Highway 29, north of Tubbs, as reports came in of houses destroyed.

The entire area was under a high wind advisory through at least 11 a.m. Monday, according to the National Weather Service, with gusts of up to 20 miles per hour.

The first evacuees from Atlas Peak began arriving at the CrossWalk Community Church evacuation center before midnight on Sunday, and about 20 people had made their way there by 1 a.m. Relatives of those living in the area were also arriving at the center, along with a representative from the American Red Cross.

A deputy was overheard telling a man at the evacuation center, whose elderly mother lives alone on Atlas Peak, that law enforcement was attempting to go door to door in the area, but fallen trees and flames were blocking the way.

Among the evacuees were Alejandra Alfonzo and five members of her family, who were visiting from Florida. The family had been visiting nearby wineries and had just returned to the Silverado Resort and Spa as the fire was approaching.

“We were trying to get to the room and the fire was very close,” Alfonzo said. “Everyone was leaving; the hotel was already empty. Half the staff was gone when we arrived.”

Alfonzo said she and her family had to leave their luggage and escape in their van as flames came within one-fifth of a mile of the resort. “Our IDs are still there; I don’t know how we’ll fly back if the hotel burns,” she said.

Alfonzo said that power at the resort had also failed while the family was there.

While escaping, the family picked up Debbie DeLanoy, another tourist, and brought her to the evacuation center.

DeLanoy said she and her boyfriend were visiting the area from Las Vegas and were staying in an Airbnb rental on Westgate Drive near Atlas Peak Road. The couple arrived at around 7 p.m. Sunday, she said.

“My boyfriend went walking just for fun," DeLanoy said, "and I got a text message saying, ‘Get out of there now. Look out the back door. There’s a fire.' And I saw the place next door torching up. I left with my medicines and his backpack."

DeLanoy said as she left, she encountered an emergency vehicle that transported her to Silverado Resort and Spa, which was also being evacuated. From there, she rode with Alfonzo's family to the evacuation center.

“My boyfriend called; he said he’s going to walk down here. He’s a walker. I didn’t expect this; I came here to get away from that. But I’m safe. I worry about the people who are not,” she said.

The blaze was visible from Big Ranch Road around 1:30 a.m., where vehicles lined the road, their occupants sitting and standing on car roofs and in truck beds, gazing on the engulfed hills.

In Yountville around 2 a.m., ash rained and smoke stifled the air as the fiery rim capped the hills rising to the east above Silverado Trail.

The fire could also be seen from Highway 29. Multiple traffic stoplights between Yountville and the city of Napa were without power around 2 a.m., as intermittent caravans of emergency vehicles sped north, lights and sirens blazing.

Napa County has opened the animal shelter at 942 Hartle Court for household pets.

Smoke from the multiple fires may create a health hazard, Napa County warned. Anyone who can see or taste smoke should minimize outdoor activities.

Elsewhere, fire units in Sonoma County reported a major blaze in the area of Porter Creek Road and Petrified Forest Road. The area was under a mandatory evacuation. There were preliminary reports of at least one structure on fire.

Napa County officials this morning released a map of burned-over areas throughout the county. They advise that the fires remain uncontained an…

Napa Valley College said Tuesday it is canceling classes until Monday, Oct. 16, but the gymnasium will remain open as a shelter for evacuees o…

During a week of wildfires raging across Napa and Sonoma counties, tens of thousands of residents saw their lives and homes spared – but not t…

The hillside on Atlas Peak Road glows from the wind-swept fire that has prompted night evacuations on Soda Canyon Road and Atlas Peak areas.

This is the fire burning on Atlas Peak at 2 a.m. as viewed from Yountville Cross Road.

Flames on Atlas Peak as seen from the valley floor at 1 a.m. Monday.

The fire as it appeared in Coombville early Sunday morning, prompting evacuations.