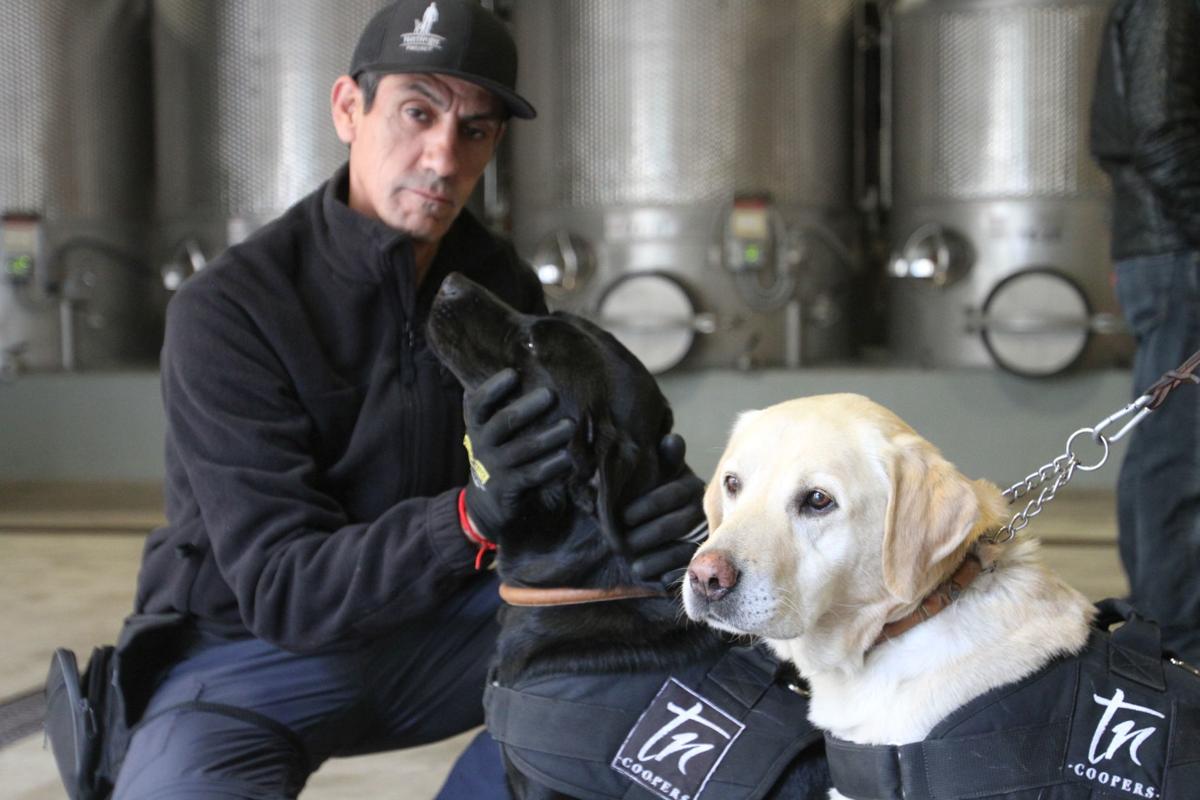 TN Coopers brought dogs capable of detecting TCA, a compound that can mute the flavor and aromatic profile of wines, to Pine Ridge Vineyards on Friday. The dogs can sniff out the compound which can form on corks and barrels, the company said. From left to right: Benito, the dogs' handler, Zamba, a 2-year-old black Labrador retriever, and Moro, a 10-year-old golden retriever. 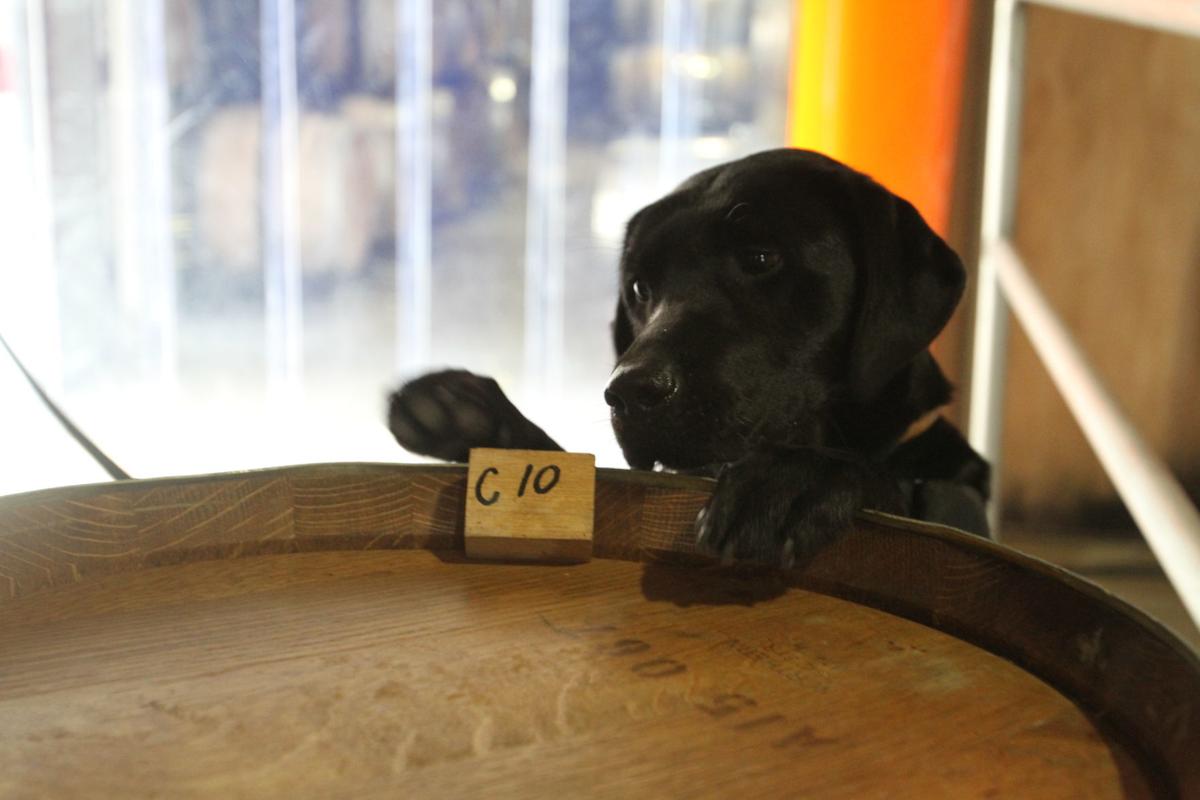 Zamba, a black Labrador retriever, successfully detects the TCA compound on a contaminated block of wood during a test at Pine Ridge Vineyards last Friday. 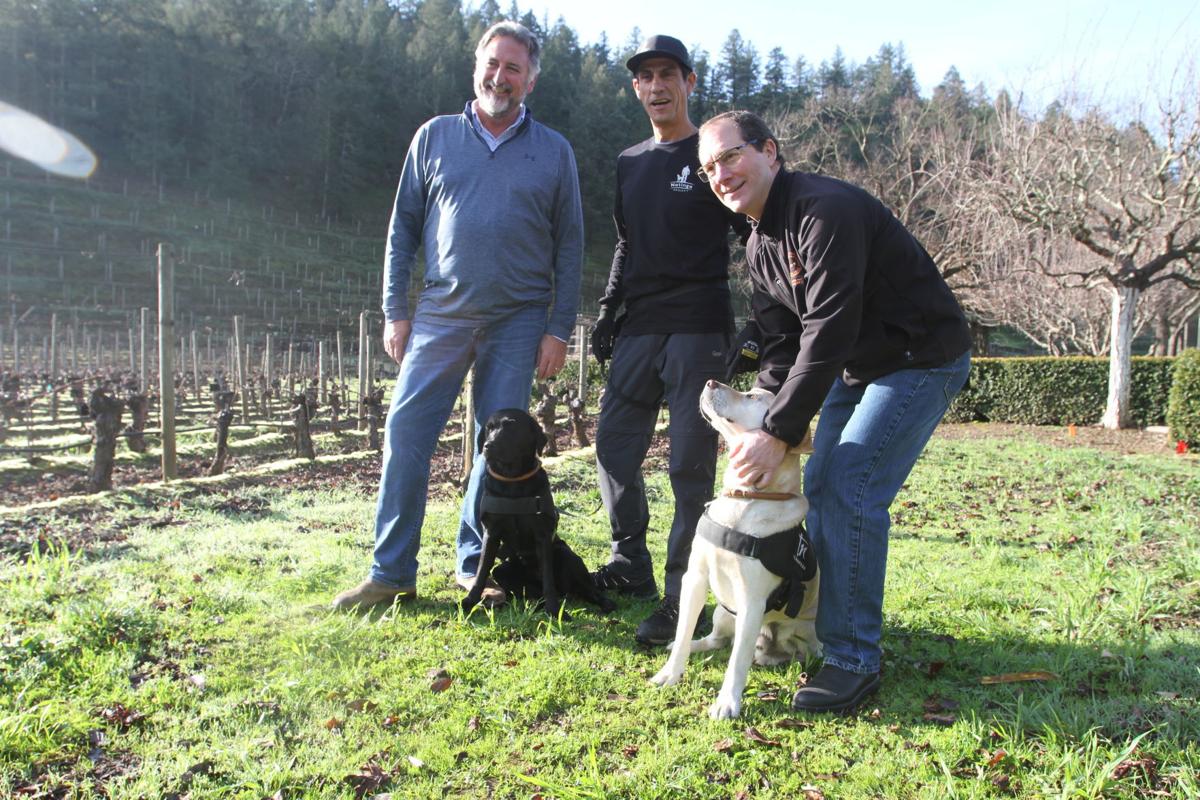 There are a host of individuals tasked with producing quality Napa Valley wine: grape growers, farm workers, winemakers, and the list goes on. In the future, it might very well include canines.

Not just any kind of dogs, though: TCA-sniffing dogs. TCA, a chemical compound (2,4,6-trichloroanisole), can wreak havoc on even the most premium of wines. More commonly known as cork taint, it can strip wines of their flavor and aromatic profiles, leaving behind a detectable “wet newspaper” scent, according to Alejandro Fantoni, sales manager with TN Cooperage, which has offices in Chile, Argentina, Italy, South Africa and Sonoma.

“TCA is one of the worst things,” he added, speaking for the cooperage industry, which sells wine barrels. “You can deal with leaky barrels, you can deal with a barrel that didn’t match the profile of the wine, but TCA can break your relationship with a client.”

TCA can form anywhere there’s moisture, according to Pine Ridge Vineyards winemaker and general manager Michael Beaulac, and it most often forms on wood. TCA can develop on hoses, in barrels, even in corks — which makes it a huge concern for the wine industry. And it can be difficult to detect. Laboratory testing often involves bentonite, a kind of TCA-absorbent clay, and cannot necessarily point vintners or barrel makers to the source of the contamination.

But there’s another sort of exam that can detect TCA with that kind of precision: the sniff test — as long as it’s dogs who do the sniffing.

It was an idea that struck TN Coopers almost accidentally.

“We were working with labs, looking for different ways, and then we stumbled across a set of bomb-sniffing dogs in an airport,” Fantoni said. “We started talking with one of the staff, and we asked if we could train the dogs to detect molecules in wood. They told us dogs could be trained to detect anything.”

That was 10 years ago. Today, the company works with six TCA-sniffing dogs: two puppies, Bonnie and Clyde, who have just begun their training, and four fully trained retrievers.

Two of those canine employees, Moro and Zamba, this week became the first of TN Coopers’ cohort to visit Napa Valley. On Friday, they wove through the wine caves at Pine Ridge Vineyards, where they performed a demonstration for staff and a gaggle of other interested industry members.

Moro, a 10-year-old golden retriever, began as a bomb-sniffing dog in Chile, where TN Coopers was founded, according to Fantoni. Because dogs can be trained to detect from seven to 10 different scents, he said, the company decided to experiment with training a “previously employed” dog like Moro.

It’s been a success — and on Friday, it was a visible one. Moro paced the racks and barrels in the wine caves, reliably locating and alerting her handlers to TCA-contaminated blocks of wood that her trainers had hidden among the cave walls.

Zamba, a black lab—who at around 2 years old is a newer hire — also aced the practice demonstration. A little more excitable than Moro, her tail wagged as she alerted her trainer to a TCA-contaminated cork that Beaulac, the winemaker, had hidden among the barrels.

“We test for TCA, and it always comes back clean,” Beaulac said, of Pine Ridge. “But most of this place is wood, and so in the back of your mind, you’re always a little concerned. That’s why we had them here today.”

In late 2018, TCA was at the heart of a lawsuit filed by Opus One against a cooperage company. The winery alleged that 10 of the French oak wine barrels it had purchased from its supplier were contaminated with the compound, which resulted in the loss of almost 600 gallons of Cabernet Sauvignon. Damages, at the time of the filing, were estimated to be almost $500,000.

“It’s a compound that provides this aromatic and flavor muter,” Michael Peters, another sales manager for TN Coopers, said. “When you open a bottle of wine and there’s no aromatics and no palate — if it’s just one bottle, that’s one thing. But if it’s an entire barrel, it becomes a big, expensive issue.”

He said Moro and Zamba would be doing another demonstration at the Unified Grape and Wine Symposium, Feb. 4-6 in Sacramento. After the Opus One lawsuit, Peters realized that “no one else” knew about how dogs could be used to detect TCA. The company wants to spread the word, he said, because of how much TCA can harm cooperage companies and wineries.

“It’s a pretty evil thing, because I know my wines, but (the consumer) doesn’t,” Beaulac said. Low levels of TCA in wine aren’t usually overtly apparent, he added, but they’ll certainly degrade the quality of wine.

“You don’t know that it’s the TCA, so you blame it on the wine,” he said. “People who don’t know will just assume that they don’t like that particular wine.”

For now, the dogs are based in Chile (Commands given by the trainers at the winery on Friday were given entirely in Spanish). But if interest grows, Peters said, the company would consider having dogs based in the United States.

“We’re definitely thinking about having them here, but it would be a full-time job,” he said, pointing to Benito, Moro and Zamba’s full-time handler. The two were sniffing around in the vineyard, apparently enticed, like their regular canine peers would be, by the smell of dirt and fresh grass. “It’s a labor of love.”

North Coast wineries and coopers may soon have a new line of defense against dreaded cork taint: former drug sniffing dogs from Chile.

Your cabernet smells like cabbage. What should you do?

Can you tell when a wine is corked, cooked, reductive or otherwise flawed? When you get a faulty wine at a store or a restaurant, do you retur…

Cayuse Vineyards alleges it was forced to shelve more than half of its 2015 vintage due to faulty corks.

TN Coopers brought dogs capable of detecting TCA, a compound that can mute the flavor and aromatic profile of wines, to Pine Ridge Vineyards on Friday. The dogs can sniff out the compound which can form on corks and barrels, the company said. From left to right: Benito, the dogs' handler, Zamba, a 2-year-old black Labrador retriever, and Moro, a 10-year-old golden retriever.

Zamba, a black Labrador retriever, successfully detects the TCA compound on a contaminated block of wood during a test at Pine Ridge Vineyards last Friday.