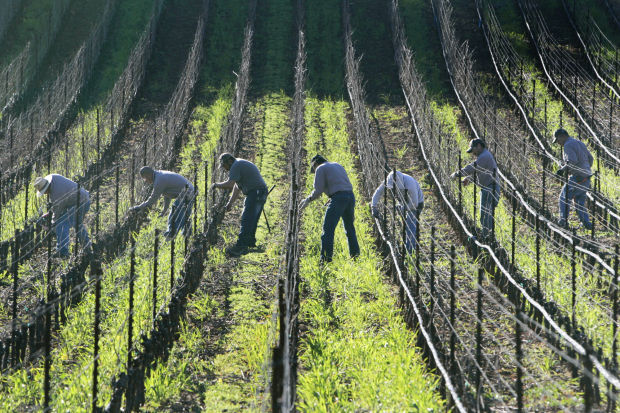 Under sunny skies, a crew prunes vines in a vineyard near Oakville Cross Road and Silverado Trail last week. Although mustard is in full flower, the vines themselves will sleep for another couple of months before new growth for the 2015 vintage emerges. 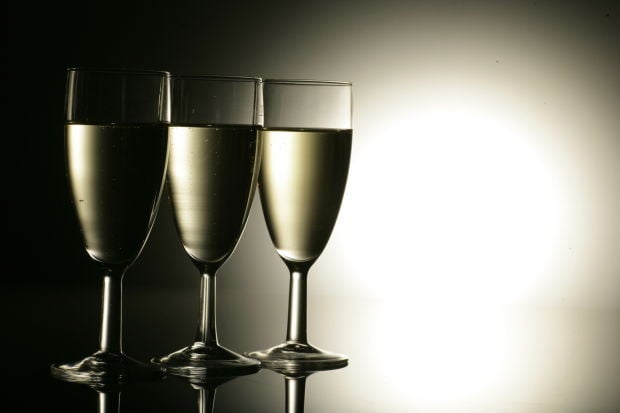 Sales of sparkling wines grew for the sixth year in a row in 2015, with Italian Prosecco leading the way, according to The U.S. Wine Market: Impact Databank Review and Forecast.

Although sales of wine have recovered strongly from the depths of the recession, Impact Databank reports that the total U.S. wine market only grew 0.3 percent in 2014 to a volume of 322 million nine-liter cases.

The tepid sales result largely from weak on-premise sales in restaurants and bars.

The report is from the current edition of The U.S. Wine Market: Impact Databank Review and Forecast.

The report said that the sparkling wine segment drove what growth there was, with an estimated increase in volume of 3 percent to 16 million cases.

Last year was the sixth year that sparkling wines grew after dropping during the financial crisis of 2008.

The bad news for U.S wine companies is that imported sparkling wines grew 6.6 percent to 7.1 million cases, while domestic brands were estimated to be stable at 8.85 million cases.

Italian Prosecco was the biggest winner including wines from Mionetto, La Marca, Zonin and Riondo.

Among domestic brands, low-end Cook’s from Constellation and Andre from Gallo are the biggest sellers by volume followed by Korbel from Heck, which is marketed by Brown-Forman, but the segment received a boost in 2014 from Barefoot’s new Fusion line, which is coming up fast.

In Napa Valley, Domaine Chandon is heavily targeting millennials for growth, including special packages and marketing campaigns. It makes about 650,000 cases per year, one third that of cheaper Korbel. Other local producers include Schramsberg, Mumm Napa and Domaine Carneros, while V. Sattui, Frank, Artesa and others make small quantities of bubbly.

At one time, Mondavi, Beaulieu and other local wineries produced sparkling wines mostly for internal use, celebrations, tasting rooms and club members, a practice that is returning as Rack & Riddle in Healdsburg makes it possible for small wineries to produce sparklers from their own base wine without the specialized equipment and expertise needed to produce sparkling wine.

The numbers are a bit different from IRI, a Chicago-based market research firm that tracks sales in supermarkets; these sales aren’t allowed in some states like New York.

IRI channels account for 40 percent of the total U.S. sparkling wine market by volume, as measured by Impact Databank.

For information and to order The U.S. Wine Market: Impact Databank Review and Forecast, go to ImpactDatabank.com. It costs $995 for the print version, $200 more on CD.

The survey posed a series of questions to 1,001 frequent wine drinkers in the U.S., which resulted in a better understanding of exactly where, when and how Americans are enjoying wine.

Gallo, the world’s largest family-owned winery, has both a stake in the results — but also in the attitudes. Its wines have always been a big part of Americans’ consumption from Hearty Burgundy to Barefoot.

Vice president of marketing and third-generation Gallo family member Stephanie Gallo explained: “For over 80 years, Gallo has been committed to excellence, and in today’s wine market that means we must remain at the forefront of innovation by crafting wines that reflect wine behavior at the dinner table and beyond.”

As a whole, the survey told us that Americans are enjoying wine more often than before by bringing it into dining, entertaining and casual experiences while eager to experiment with flavors and formats.

As a result, many successful wineries focus on catering to customers’ tastes rather than asking them to accept what’s traditional.

The differences between younger wine drinkers and seniors are especially interesting. Here’s a summary of the results:

EVERYONE NOW IS A WINE CRITIC

Younger drinkers in particular are turning to social media to talk about and discover new wines. More than half participate in conversations about wine on social media. Every wine drinker can now be both critic and influencer. They are also using the Internet for wine knowledge, with nearly half respecting bloggers’ opinions.

SWEET AND BUBBLY ARE IN STYLE

These younger drinkers also reject the notion that sparkling wines are just for special occasions. Many reported that they are popping bottles for everyday moments.

WINE DRINKERS ARE MIXING IT UP

Younger drinkers are seemingly unbound by traditions that have often governed wine. Of those surveyed:

WHAT IS ON THE INSIDE COUNTS

Under sunny skies, a crew prunes vines in a vineyard near Oakville Cross Road and Silverado Trail last week. Although mustard is in full flower, the vines themselves will sleep for another couple of months before new growth for the 2015 vintage emerges.

Sales of sparkling wines grew for the sixth year in a row in 2015, with Italian Prosecco leading the way, according to The U.S. Wine Market: Impact Databank Review and Forecast.