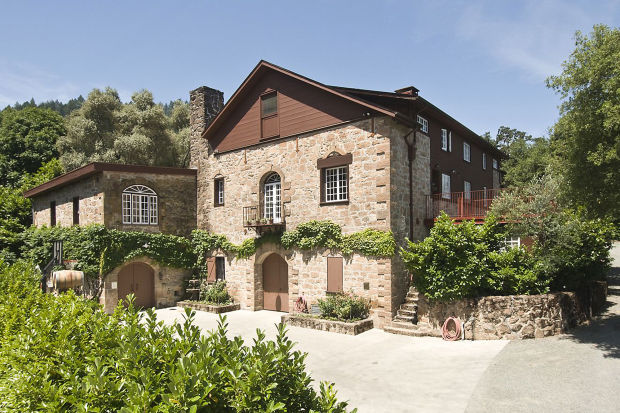 Bill and Jane Ballentine purchased the former Weinberger winery and restored it. This is the William Cole winery today. The Ballentines live above the winery. Submitted photo 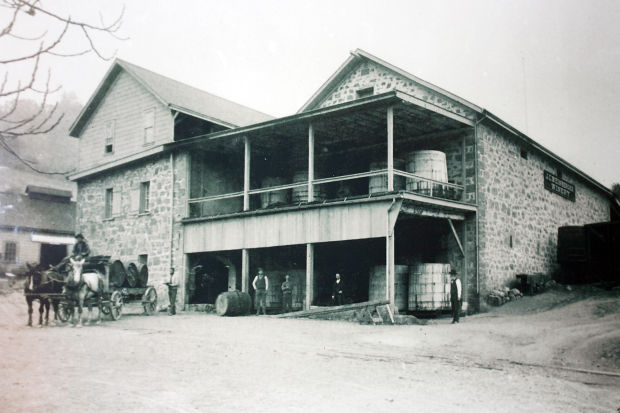 J.C. Weinberger built this winery in 1876. The picture depicts it as it was in 1880. Weinberger was later murdered by a disgruntled employee, leaving the winery to his wife, Hannah. Submitted photo

ST. HELENA — For William Ballentine, the owner of the William Cole Winery just outside St. Helena, looking back may offer a path forward when it comes to resolving longstanding permitting issues with Napa County.

Ballentine’s stone winery was built in 1876, and he’s hoping its history as one of the Napa Valley’s first wineries will propel it onto the National Register of Historic Places — thus escaping regulatory scrutiny from the county.

But his clock is also ticking. In attempting to squash a dispute between Ballentine and his neighbors to the south, the Morlets, the Napa County Board of Supervisors in November gave William Cole three months to resolve the permitting issue.

That deadline is set to elapse Jan. 29. Unless it gets extended, Ballentine will have to install a fire sprinkler system in the winery, which he contends would compromise the historic integrity and character of the building he’s worked to preserve.

He said he’s also facing the prospect of widening a driveway next to the building, but wants to avoid doing so to keep landscaping crafted by famed landscape designer Thomas Church intact. The landscaping of trees and vegetation abuts the driveway and would have to be removed if it was widened, he said.

“It would just be atrocious,” Ballentine said of the changes. “If there was a fire danger I would say, ‘OK.’ But stone doesn’t burn. We had a painstaking process to put this place back as original as possible. It’s really a shame.”

Former county Supervisor Mel Varrelman asked the supervisors to extend the deadline during their meeting Tuesday. Varrelman made the request during a public comment period, which doesn’t elicit responses from the board. The next Board of Supervisors meeting is on Jan. 28, one day before the deadline.

Varrelman told the board that William Cole has submitted its request to be put on the National Register of Historic Places to the California Office of Historic Preservation. Napa County Landmarks has nominated the winery’s bid for approval, as the winery is already on the county’s registry of buildings.

Getting onto the national registry is crucial, Ballentine said, because it takes the regulatory oversight of the building away from county planning staff and gives it to the state government, whose requirements are less stringent.

“At that point it becomes a state resource and it’s out of the hands of the county,” Ballentine said.

While the supervisors offered no response to that prospect during the meeting Tuesday, they were blunt in their advice to Ballentine in November. They told him to get the required work done, with Supervisor Bill Dodd faulting Ballentine for stoking the dispute with the Morlets.

Supervisor Brad Wagenknecht warned Ballentine that he would not support a deadline extension.

Ballentine and his wife, Jane, own the winery and reside in the building’s top floor, with the bottom half devoted to wine production. Each felt confident in William Cole’s chance to be added to the national registry.

The winery was first built by John C. Weinberger, who moved west to California from the Midwest with his wife, Hannah, Bill Ballentine said. Weinberger chose to construct the building with tuffic rocks mined from the property specifically to keep it from burning, as happened to another nearby winery.

A jealous employee, William Gau, desired Weinberger’s daughter, but when she spurned his romantic advances, Gau plotted to murder Weinberger, Bill Ballentine said. Gau laid a trap for Weinberger, getting him to come into the train station in St. Helena, where he fatally shot him on March 21, 1882.

The Weinbergers were prominent citizens in early St. Helena society, as John Weinberger was a founder of the Bank of St. Helena. His death resonated throughout the area, Ballentine said.

An early history of Napa County offers this tribute: “His death was felt to be a public misfortune, for although quiet, unostentatious and modest, there were few indeed more generally loved by the community. He was public-spirited, energetic and enterprising.”

Conducting the family’s wine business fell to Hannah Weinberger, the first woman to hold such a position in the valley, Bill Ballentine said.

She continued to nurture the winery until Prohibition took effect in the 1920s, after which the property fell into disarray, he said.

In 1938, the property changed hands, and the Harrison family of San Francisco took hold of it, and brought in a local architect named Bourne Hayne to renovate the building into a weekend home.

The Harrisons also hired Thomas Church as the landscape architect; his original drawing for his plans for the property hangs on the entryway to the Ballentines’ home. The Ballentines have also tried to preserve Church’s rock walls, gardens, trees, vegetation, pathways and pools as much as possible.

Bill Ballentine purchased the property with the goal of restoring it to its historical roots. He got approval from the Board of Supervisors in 2002 for a change in the Winery Definition Ordinance so the county could issue a use permit for a winery on a property smaller than 10 acres.

“Keeping them the way they were is getting harder and harder every day,” Bill Ballentine said. “We want to preserve as much of the Napa Valley as we can. Too many of these things are being completely leveled and redesigned. Without that we lose what people come here for.”

A St. Helena winemaker has opted to shutter his winery to visitation rather than install a county-mandated sprinkler system. Instead, he will …

Bill and Jane Ballentine purchased the former Weinberger winery and restored it. This is the William Cole winery today. The Ballentines live above the winery. Submitted photo

J.C. Weinberger built this winery in 1876. The picture depicts it as it was in 1880. Weinberger was later murdered by a disgruntled employee, leaving the winery to his wife, Hannah. Submitted photo