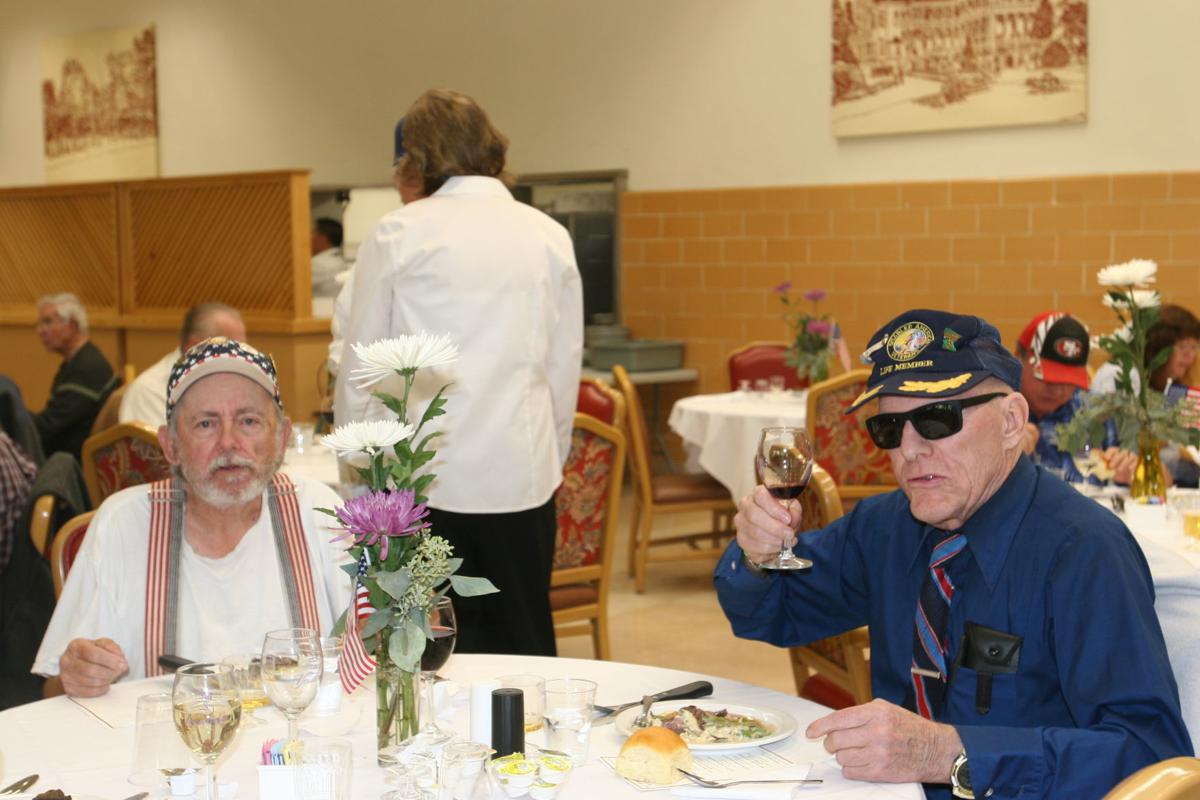 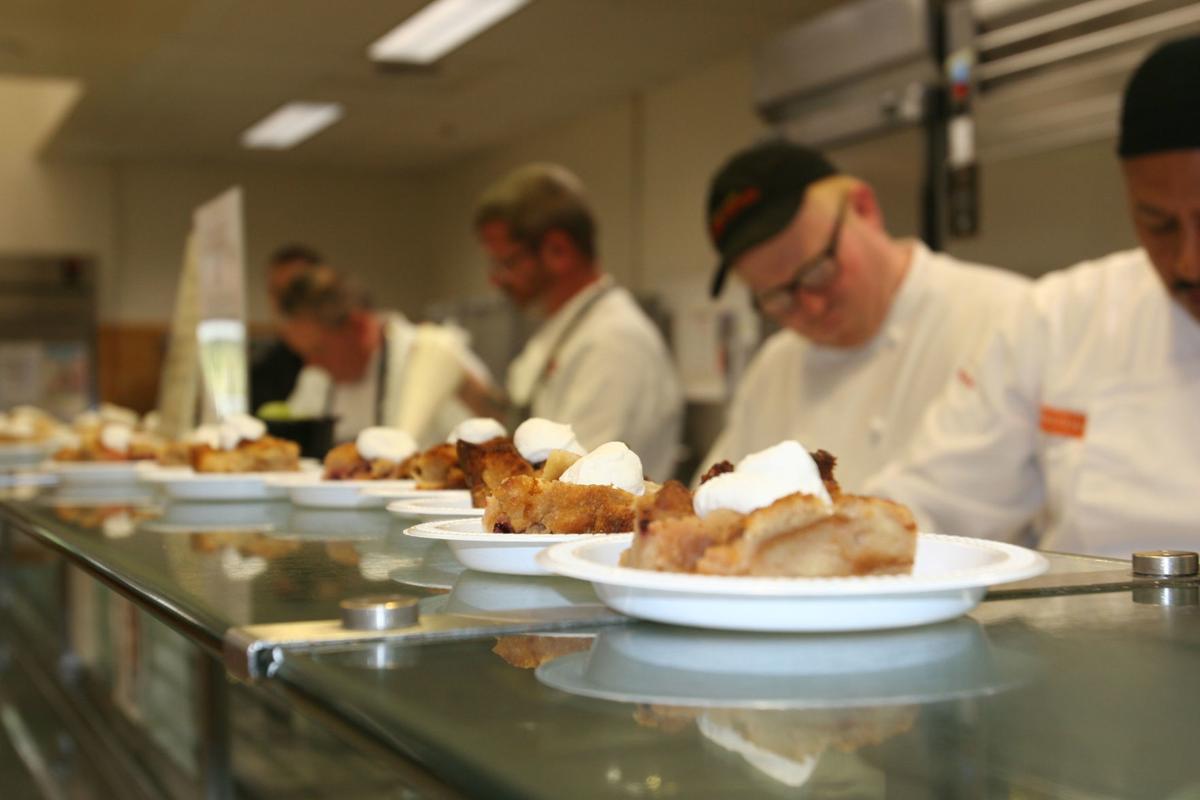 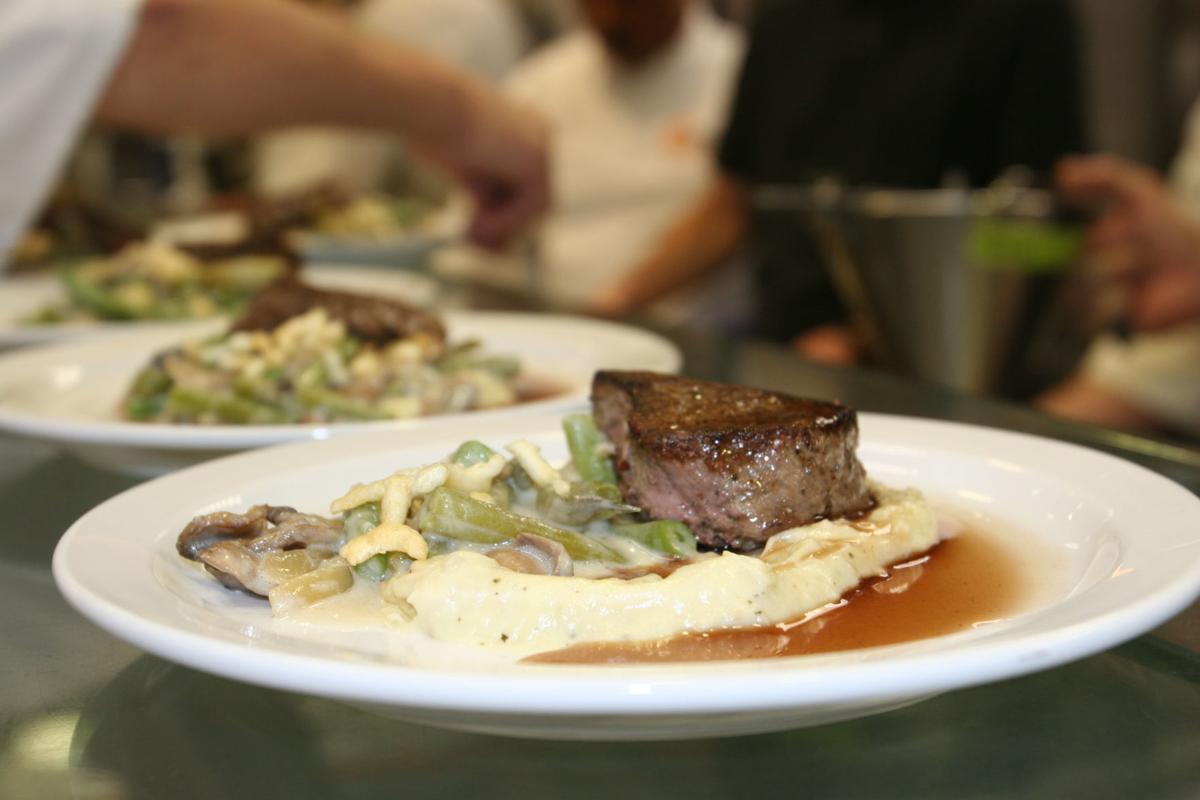 YOUNTVILLE — In 2004, Bob Hurley helped host a special Veterans Day Luncheon at the Yountville Veterans Home. At the time, he said, it was meant to be “a one-off.”

Fifteen years later, the luncheon has taken place every year since, orchestrated by Hurley and the town’s Chamber of Commerce.

“It was only going to be that one year we were doing it, but we liked it so much, and the veterans responded so well to it that we thought – let’s do this every year,” said Hurley, who retired from the restaurant business after closing his eponymous Yountville restaurant in 2018. Year after year, he said, engaging with the veterans brings him back.

The luncheon’s two services are entirely volunteer powered, from the servers to the chefs behind the afternoon’s menu – many of whom are well known in the Yountville community for their positions at local restaurants.

On Wednesday afternoon, the men all lined up to serve lunch, plating meals step by step. All, save Young with the Wine Train, are based in Yountville. It’s his second year serving, Young said, adding that he’s looked forward to once again getting together with the other chefs and seeing the reaction of the veterans being served.

“These guys are tremendous,” he said. “We wouldn’t have the lifestyle that we have if it wasn’t for these veterans. It’s because of them – we’re all very grateful.”

Ali Grannis, a veteran of the Navy, has lived at the Veterans Home for 11 years. She looks forward to the lunch each year, she said, adding that from food to service to presentation, everything is “done first class.”

“I think (the community) is forever saying ‘thank you’ one way or another, but this is a very special occasion,” she said, adding that the tradition of the lunch, year after year, has made it even more special for her. She praised Hurley and the other chefs for their efforts, noting the importance of gratitude.

“For example – I’ll thank (nurses and doctors) for their services. I think it’s wonderful to thank people for the things they’ve done,” Grannis said. “And it is a sacrifice. It has been a sacrifice.”

“It’s just delicious,” Mike DeCosta, a 13-year resident of the Veterans Home who served abroad in Germany during the Vietnam era, said. He was working his way through his plate. “It makes you feel like you’re appreciated. And it’s a departure from the day to day.”

Donald Bickford, who served in Vietnam, said it was his fifth time attending the lunch. The community showing gratitude towards veterans lifts his spirits, he said.

Yountville Mayor John Dunbar described the afternoon as a way to “bring some of the finest part of Yountville” to the town’s resident veterans, some of whom have mobility limitations and aren’t able to venture into downtown often. Each year, Dunbar said, he learns something new from residents, who have “living history” to share.

“This is always one of the things you mark early on your calendar to be a part of,” Dunbar said. “It’s a very small effort on our part, but it does mean a lot to the residents, and it does stay with us that we’ve done something good for these people.”

“Whether you took one day or 30 years of your life and dedicated it to our nation, you put yourself, your family and your lives on hold in order to ensure that our citizens felt protected,” she said in a speech.

“They were willing to put their lives on hold – and in some cases, on the line – to protect our freedoms,” Peake added later. “It’s a treasure any time you can bring in an organization that truly understands what it means to thank a veteran.”

On Monday, Nov. 11, in observance of Veterans Day, the St. Helena A&W restaurant is giving away free combos to all veterans and active dut…