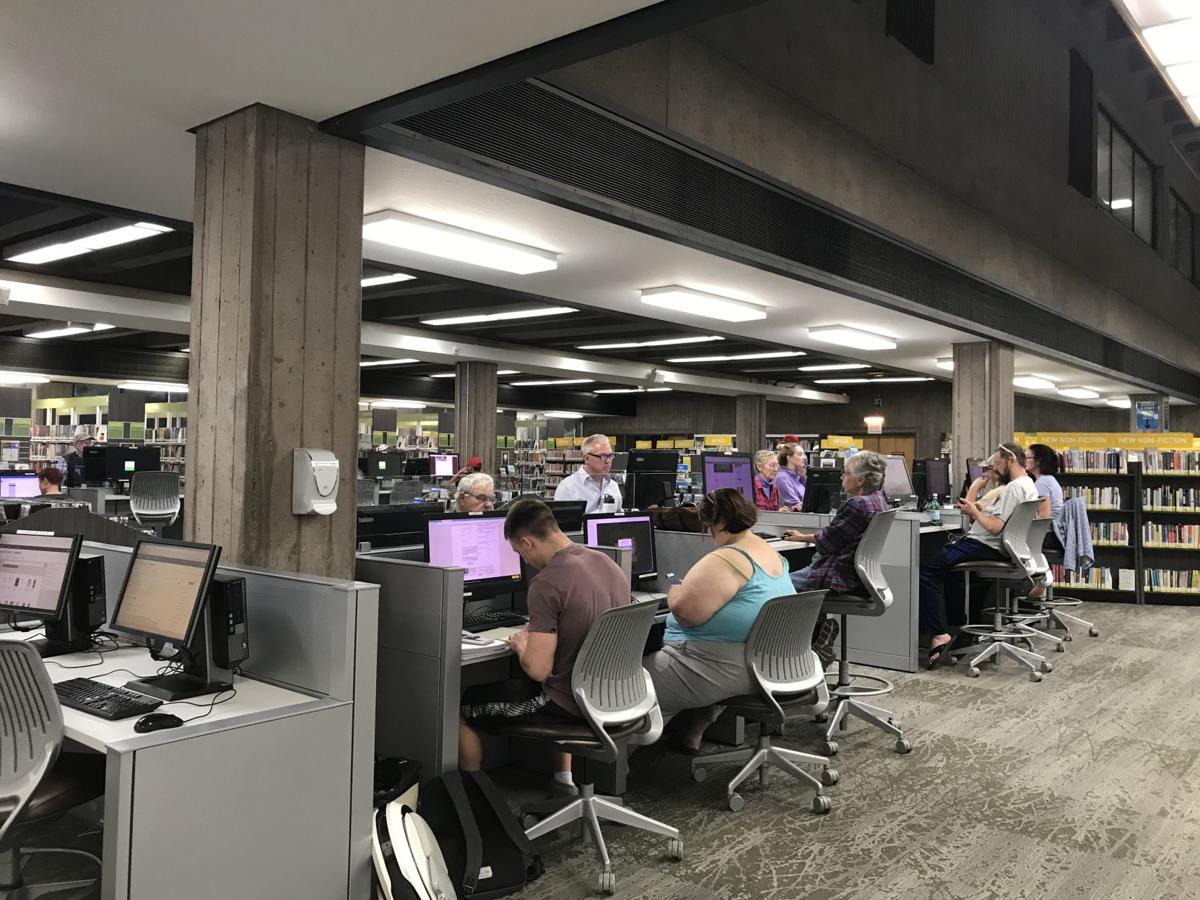 The Napa County Library branch in downtown Napa had 1,400 more visitors than usual on Wednesday due to the power outages. 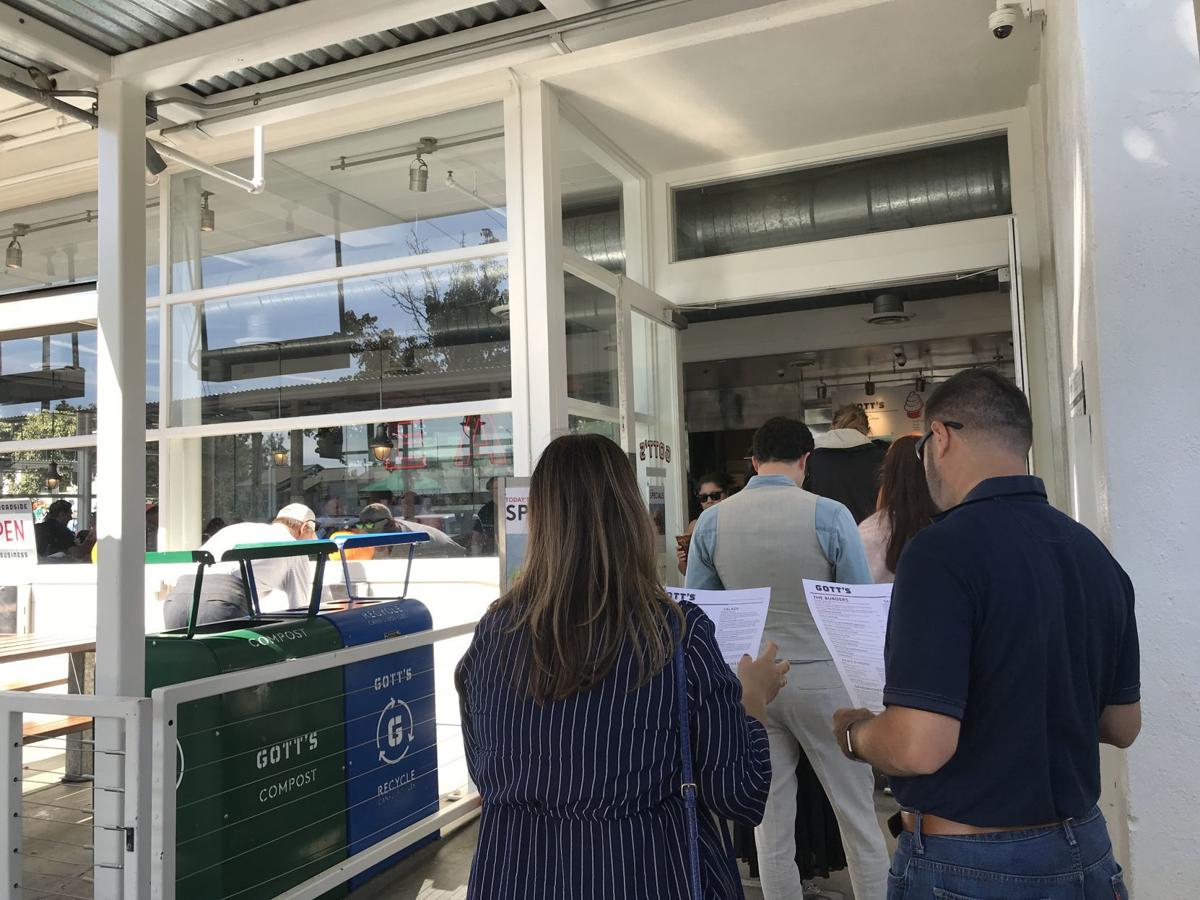 Patrons in line at Gott's on Thursday afternoon. 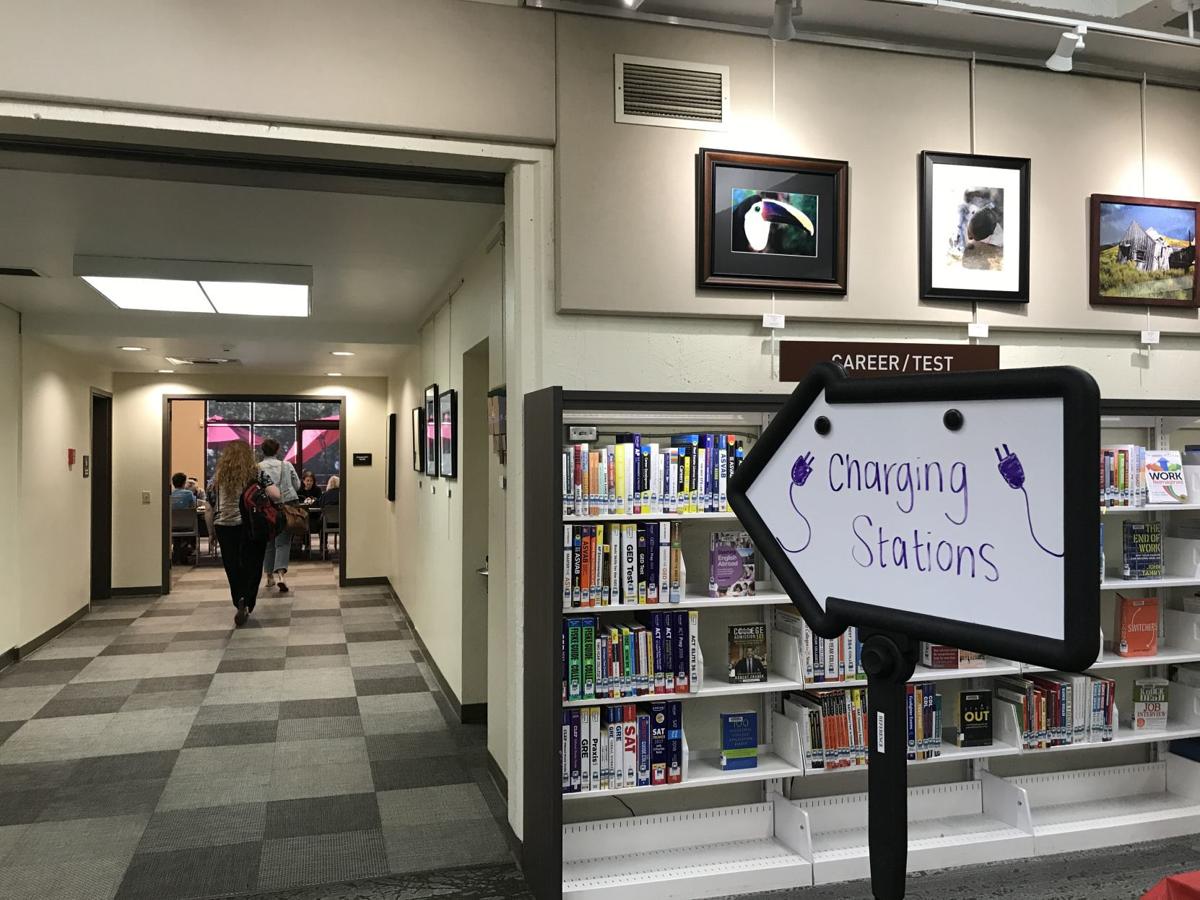 A sign points to charging stations at the Napa County Library.

This week’s power outages have been a boon to businesses fortunate enough to still be able to serve the public.

Having lost their electricity, tens of thousands of Napa County residents have been forced to shop for new provisions, seek prepared food outside the home and find public spaces that will allow them to use the internet.

For some, the circumstances this week are reminiscent of the aftermaths of both the 2014 earthquake and the wildfires two years ago that shook up people’s regular routines.

Places like Gott’s Roadside at Oxbow Public Market, which was spared from the outages, had a 50 percent uptick in business, General Manager Dave Woolsey reported Thursday afternoon.

“So far we’ve been able to handle it pretty seamlessly – we’re staffed for busy,” he said. “It’s been a good problem.”

The Napa County Library in downtown Napa has been especially busy, hosting residents at its charging stations, for children’s activities and Wi-Fi. Director Danis Kreimeier said 1,400 more people than usual had come through the library doors Wednesday.

“When the fires and the earthquake happened, people were slow to find we were a resource,” Kreimeier said. “This time, the word is out, and people know that we’re available.”

At Browns Valley Market, which retained power even as much of the area surrounding it went dark, there’s been a substantial increase in business, according to Manager George Chavez.

People have come in looking for basics, like batteries, water and charcoal, and also to purchase grab-and-go items or food to be made on the grill, Chavez said.

“People are panicked. They don’t know how long this is all going to take with the wind warnings,” Chavez said.

Co-owner Stacy Wagner said the business had power during the fires in 2017, which had acted as a kind of practice run for the additional business driven in by this week’s shutoffs.

The restaurant added staff and supplemented orders from their suppliers.

“We were hustling to get guests accommodated. It was like a Friday night,” Wagner said about Wednesday. “Really, though, the silver lining (isn’t the additional business), it’s being able to be here and support our community, and open our doors.”

On Thursday, Gott’s was host to families, business meetings and even a busload of 31 people that had likely been rerouted by the outages, Woolsey said. He and his staff took it in stride.

“To stay open and be a place for people to gather and have a drink or some food, and meet with their friends and family – we feel that’s pretty important.”

Many Napa businesses were spared by PG&E's planned outage, but not those along Imola Avenue

PG&E: 98 percent of customers should have power restored by Friday night

The Meadows and OLE Health's Upvalley facilities found out how well their emergency plans worked.

As the lights come back on, Napa's restaurants assess their losses

Many food businesses were hit with a double whammy this week: loss of customers and spoiled stock.

“A complete debacle.” That comment to me by our state senator Bill Dodd neatly sums up PG&E’s performance in last week’s PSPS (“Public Saf…

Pacific Gas and Electric warns that it may have to turn off the power again this week.

St. Helena was bracing for another PG&E power shutoff starting at 3 p.m. Wednesday.

Power of the Napa Valley lies in resilience

Along the lines of Aaron Dougal’s letter from last Tuesday’s paper, I, too, found Sarah Klearman’s front-page story from Oct. 11th (“Outages B…

Updated at 8:18 p.m. — Monday was a day of mixed emotions for Napa County’s Pacific Gas and Electric customers.

I have to admit I shook this morning, Nov. 30, when I opened my Napa Valley Register to the front page and found the article announcing the re…

The Napa County Library branch in downtown Napa had 1,400 more visitors than usual on Wednesday due to the power outages.

Patrons in line at Gott's on Thursday afternoon.

A sign points to charging stations at the Napa County Library.