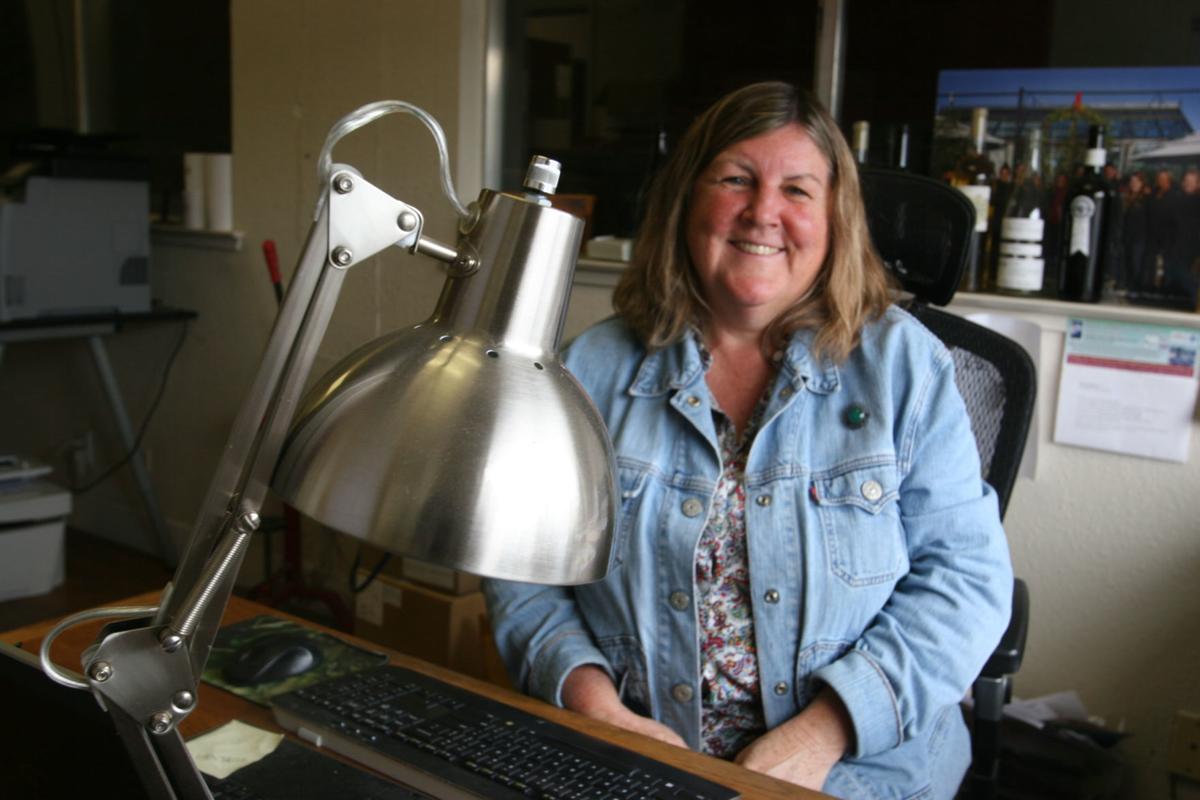 Elaine St. Clair behind her desk at St. Clair Brown, where she is both the winemaker and the brewmaster. 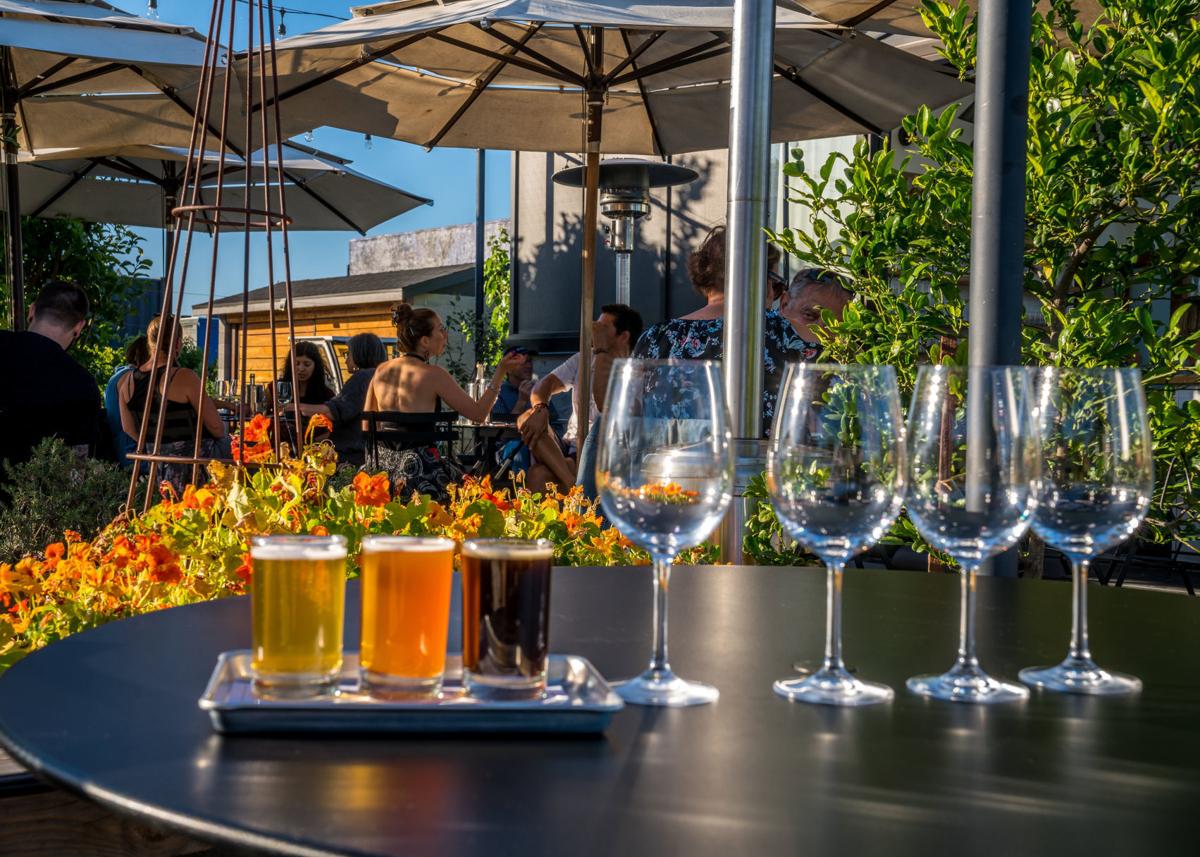 The tasting garden at St. Clair Brown offers both wines and beers made by the co-owner Elaine St. Claire. 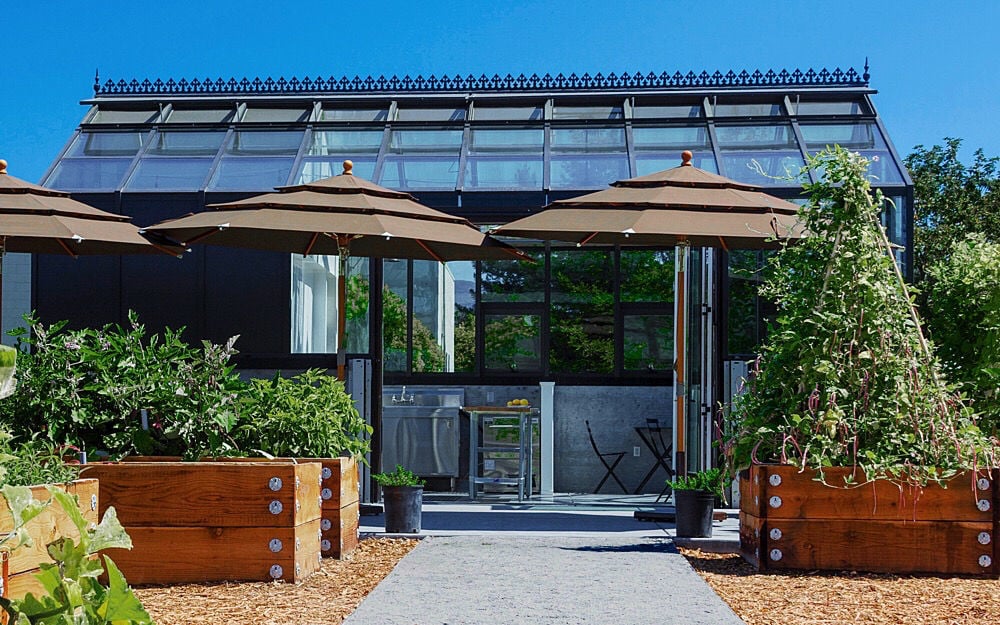 The winery and brewery's greenhouse tasting room. St. Clair Brown received brewing permits in 2018, 8 years after it was established as a winery by the two women.

Wine and beer are often natural companions: on menus, over bar counters and in the hands of consumers. And were Elaine St. Clair to hand you her business card, they’d appear together there, too.

A resume is a unique venue for beer and wine pairing. St. Clair, simultaneously a winemaker and brewmaster, is an oddity even in Napa, teeming with high-caliber winemakers. She’s one of only a handful of individuals to carry the double title nationwide.

“It’s a little bit of an unusual combination,” St. Clair said, behind the desk in her office at St. Clair Brown, the central Napa winery and brewery she co-owns with partner Laina Brown. “I think it’s partly because there’s more of a nucleus around grapegrowing areas, and when your focus is that great on the wine, (it’s difficult) to make beer, too.”

For as long as St. Clair has been in wine, she’s been in beer. She arrived at the University of California, Davis, an accent-less United Kingdom ex-patriate whose family had immigrated to Houston in her early teenage years. She’d been drawn to Davis not by the sterling reputation of its winemaking program, but by its school of veterinary medicine. St. Clair’s venture into a pre-veterinary curriculum led her to plant science and agriculture.

In her office – a nook lined by wine bottles and papers, tucked upstairs above the winery’s fermentation tanks (what she refers to as “garages”), St. Clair laughs at the luck that delivered her to Davis, where she ultimately finished her degree in fermentation science. She finished a graduate of both the winemaking and brewing tracks.

“I was familiar with brewing, because (growing up) my dad and I would do a little brewing on the side. It was just something we did together,” she said. Even at Davis, she acknowledged, it was an uncommon double major. “I was really interested in the science behind it – how to make beer and wine really well.”

Brown, the other half of the eponymous winery, met St. Clair when the two were colleagues at Domaine Carneros. There, she led direct-to-consumer efforts, and St. Clair was winemaker.

Brown had left her fashion business to work in wine—eventually at Domaine Carneros, known for its sparkling wine.

“I didn’t like sparkling – it gave me a stomach ache. Too sharp,” Brown said, laughing. But she tried the bubbly anyway– and to her surprise, discovered an enjoyable roundness to it. “I thought, wait – I love sparkling wine. And I started drinking Champagne, and going, ‘hmm … no. I like Elaine’s sparkling wine.’”

“I was just floored by everything she did,” Brown added. “It was so balanced.”

Balance, both in her wine and in her professional life, may as well be St. Clair’s industry signature. As an early-career winemaker at Domaine Chandon, St. Clair and a colleague founded a microbrewery, selling their beer throughout the Napa Valley. By pure coincidence, the venture caught the eye of Domaine Chandon’s founding president John Wright, who backed the pair. That business became Napa Ale Works, a flagship Napa brewery.

It had long been a dream of St. Clair’s to own her own business, she said, but Napa Ale Works wasn’t quite the small-scale, cottagey pub she’d always hoped to have. When the partnership began to dissolve in the late 1990s, St. Clair was a business owner, a brewmaster, a winemaker and a mother to a toddler. She saw it as a chance to take a step back.

She eventually left Chandon for Domaine Carneros, where she met Brown. Then Brown left to help launch Black Stallion Winery. At her request, St. Clair followed shortly thereafter to join as winemaker.

“I went to the owners, and I was like – you don’t even know what just happened to our brand,” Brown said. St. Clair adjusted accordingly.

“She’d never made Pinot Grigio, she’d never made Muscat. And every single one of them was the most perfectly balanced version of that wine you’d ever had,” Brown said.

When Black Stallion was sold to Delicato Family Vineyards, both St. Clair and Brown found themselves at a crossroads.

“We’d both had our own companies, and we knew it took a lot of energy,” Brown said. “We had one left in us.”

The eponymous St. Clair Brown opened as a winery in 2010. From the beginning, the pair planned to do both wine and beer (“I’d never had her beer, but I knew exactly what it would taste like,” Brown said) but that came to fruition only in 2018, after the city granted St. Clair Brown the appropriate permits.

As it turns out, according to St. Clair, it’s rare to find beer and wine together, being made under the same roof.

“It’s really hard to make beer and wine in the same space. (Getting the permits) was like a miracle – I thought we were never going to be able to do both,” St. Clair said. “We’ve just been doing things small, and growing it as we go.”

Slowly, it’s come together, and the pair remain positive: they’ve trumped obstacle after obstacle, crowdsourcing the purchase of their building on Vallejo Street in Napa from family and friends and creating a Kickstarter for their first beer equipment.

They serve beer, wine and simple food items out of their greenhouse tasting room across the street from their winery. Ultimately, Brown said, the permitting delay gave St. Clair Brown time to grow into itself.

“I didn’t want people to think, they’re a brewery that’s trying to make wine. Or, ‘Oh, they’re a winery trying to make beer,’” she said. “It was almost nice, in retrospect, to have a chance to establish our culture and our brand, and then layer the beer in.”

St. Clair Brown, as of 2018, is St. Clair’s return to commercial brewing after more than two decades away. She manages their production with the help of Bren Westerland, another of Brown’s sons. He began helping at the winery and brewery during a semester off from the pre-med track he’d previously been following. Under St. Clair’s tutelage, he discovered his own passion for brewing.

“I found it really interesting – I just asked my way into seeing if I could shadow her, and surprisingly, she agreed,” Westerland said.“Most jobs, you’re supposed to do what you’re told and stay in your lane. But Elaine was always asking me if I had any new ideas, or if there was any way I would improve a recipe.”

He veered from the pre-med path permanently, graduating from Davis with a diploma in brewing in 2018.

“I like the thought of that, that maybe we could inspire people to do something like this, because nowadays it’s so challenging to build a winery or a brewery,” St. Clair said.

She hopes to inspire women, too. Just four percent of female winemakers own their own wineries, but look for female winery owners who also make their own wine and brew beer, and well—the list of names likely shrinks considerably. Brown’s son, Cole, combed the internet for another female vintner/brewmaster without success, though Brown says she’s heard of one other woman doing both somewhere on the Central Coast.

Today, St. Clair rotates through 14 beers and eight wines. In classic St. Clair Brown fashion, the duo has recently decided to expand their offerings – this week, they’ll announce the release of 50 cases of sparkling wine for their wine and beer club members. Eventually, sparkling wine will take its place on their menu.

“Coming back (after Davis), I was like, we don’t have expensive equipment. A lot of this is done by hand. And she’s still making really, really tasteful products,” he said. “That’s the kind of thing – it can’t be taught.”

State cracking down on combination beer/liquor licenses in Napa County

The Napa Valley has become a tourist destination for those drawn primarily by the lure of excellent wine and food. Yet many visitors and local…

In Napa, beer mavens get up close and personal with microbrew in the making

There’s no shortage of creativity with craft beverages in California wine country.

Learning how to wash hands - at the Napa Preschool Program

Learning how to wash hands - at the Napa Preschool Program

Elaine St. Clair behind her desk at St. Clair Brown, where she is both the winemaker and the brewmaster.

The tasting garden at St. Clair Brown offers both wines and beers made by the co-owner Elaine St. Claire.

The winery and brewery's greenhouse tasting room. St. Clair Brown received brewing permits in 2018, 8 years after it was established as a winery by the two women.