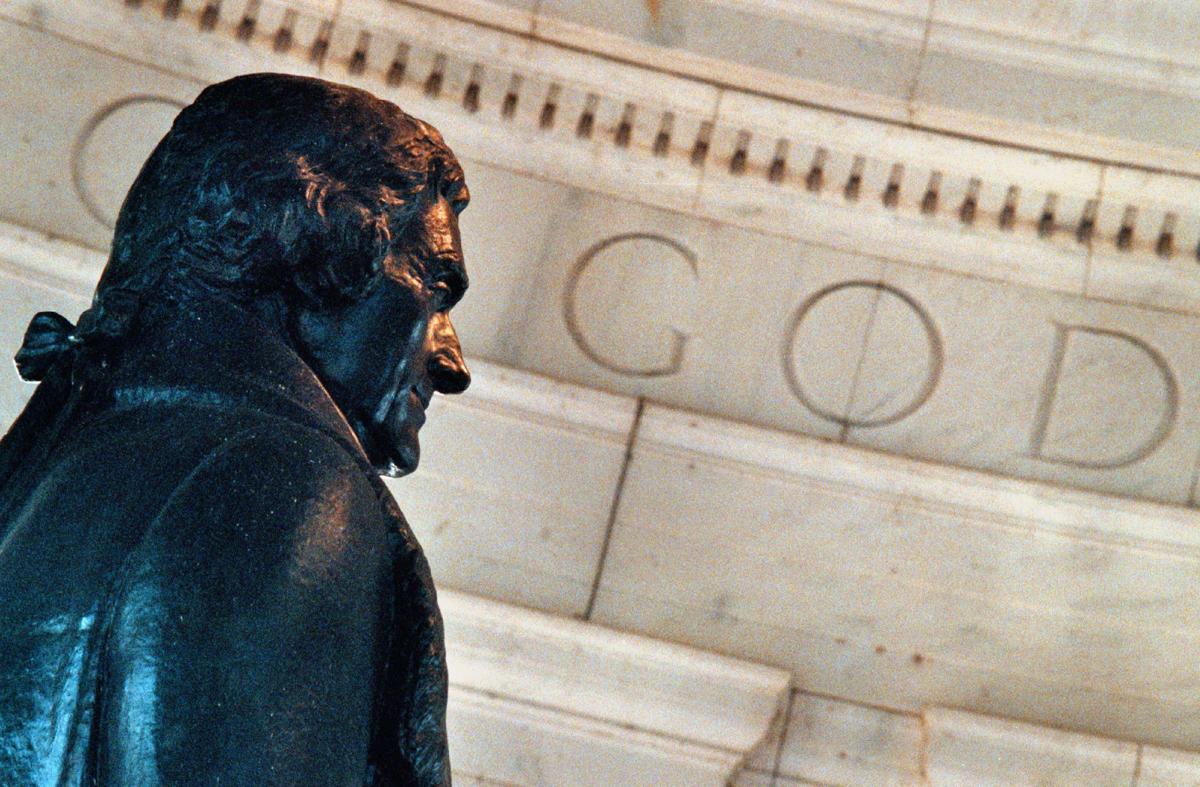 A statue of Thomas Jefferson stands in Washington , D.C., with one of his sayings in the background. 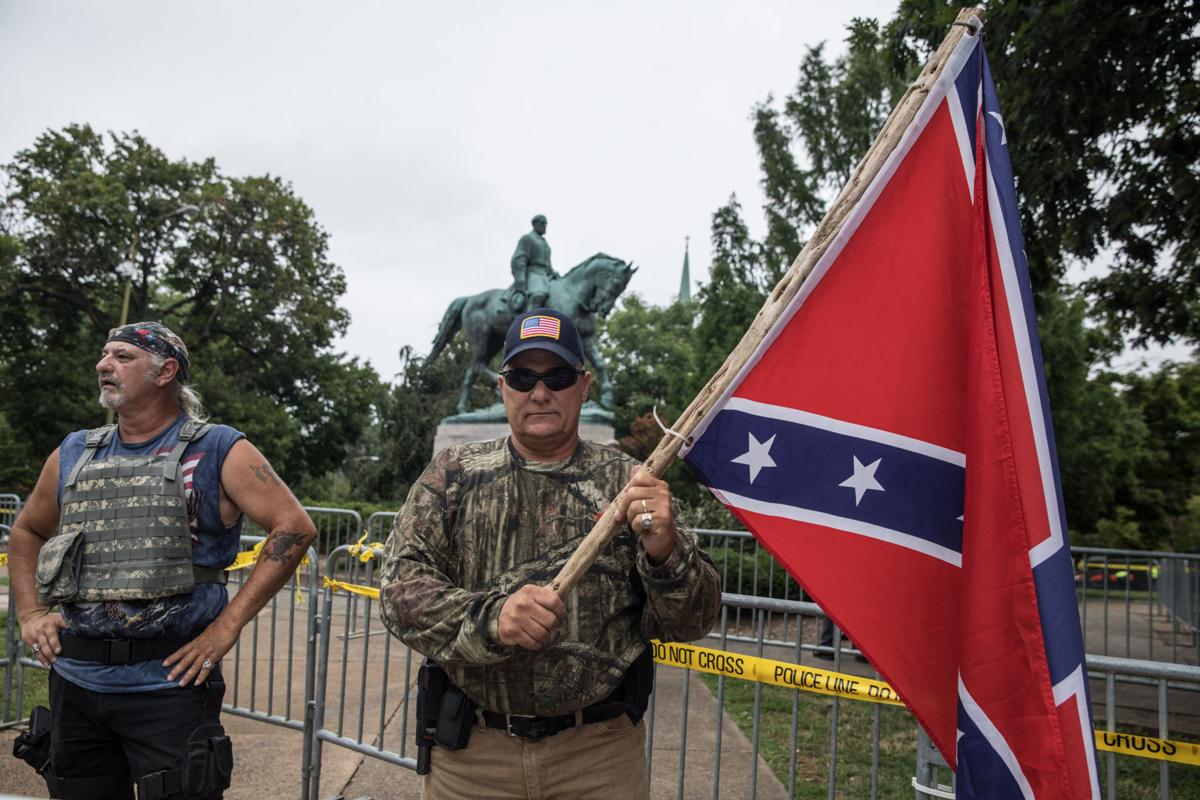 White supremacists stand in Emancipation Park, near a statue of Confederate Gen. Robert E. Lee, prior to the Unite the Right rally in Charlottesville, Va., on Aug. 12, 2017.

A statue of Thomas Jefferson stands in Washington , D.C., with one of his sayings in the background.

White supremacists stand in Emancipation Park, near a statue of Confederate Gen. Robert E. Lee, prior to the Unite the Right rally in Charlottesville, Va., on Aug. 12, 2017.

As the nation has celebrated its birthday with displays of its contemporary power and prestige this week, two of its cherished historic symbols came under fire - its first flag and its third president.

Sportswear company Nike pulled sneakers depicting the 13-star banner known as the Betsy Ross flag after former NFL football player Colin Kaepernick, who has a sponsorship deal with Nike, reportedly objected: The flag, which dates to the era of 18th-century slavery, has occassioanlly been used by white supremacists and other far-right groups. And the city council in Charlottesville, Virginia - where Thomas Jefferson's Monticello plantation is located - voted this week to scrap the former president's local holiday in favor of one that celebrates the emancipation of African American slaves.

The twin moves opened new fronts in the culture war that President Donald Trump foreshadowed two years ago, after white nationalists marched through Charlottesville to protest the proposed removal of a statue of Confederate Gen. Robert E. Lee.

"Sad to see the history and culture of our great country being ripped apart with the removal of our beautiful statues and monuments," Trump tweeted then. "Robert E Lee, Stonewall Jackson - who's next, Washington, Jefferson?"

The nation's growing diversity and polarization has prompted an outcry over the stain of slavery and a reckoning with some of America's most identifiable historic symbols. The debate over which figures and moments are to be celebrated and which condemned has shifted from emblems of the fallen Confederacy to those that are foundational to the nation's origin. The giants of U.S. history are being taken off their pedestals, both literally and figuratively, to be reexamined, warts and all.

"Different groups have different perspectives on how their ancestors were treated," historian Jarret Ruminski said. "When people say there is too much historical revisionism, they don't realize that professional historians are revising history all the time. It doesn't mean facts change. But it's an ongoing process; it never stops."

The battle to reframe American history has targeted various mementos, including statues in public parks and the names of buildings at private universities. In 2017, Yale University renamed Calhoun College, which commemorated former vice president John Calhoun, a vigorous supporter of slavery. Later that year, Trump was criticized for moving into the Oval Office a portrait of President Andrew Jackson, who drove Native Americans from their ancestral lands in the forced exodus known as the Trail of Tears.

Across the country, state Democratic organizations have been changing the name of the annual Jefferson-Jackson Day fundraising celebration, a move that South Bend mayor and Democratic presidential candidate Pete Buttigieg recently endorsed.

"You develop and evolve on the things that you choose to honor," he said earlier this year in an interview on "The Hugh Hewitt Show."

In Charlottesville, the decision to replace the April 13 observation of Jefferson's birthday with Liberation and Freedom Day on March 3 faced little challenge. City manager Tarron Richardson said the decision was prompted by the Unite the Right Rally, which turned deadly when a white nationalist drove his car into a crowd of counterprotesters.

"The events of August 2017 have challenged Charlottesville to confront its history and to acknowledge that this community has not always embraced all of our citizens as equals," wrote Richardson, who is black. "It has changed the priorities for our work serving the community on issues from affordable housing to a living wage for our employees. We want Charlottesville to be known as a community that has learned important lessons from our long and complex racial history."

Jefferson has long been a celebrated figure in Charlottesville, where he founded the University of Virginia. His birthday, which has been recognized as a city holiday since 1945, is celebrated at the university with an annual wreath laying at the Jefferson Memorial.

On the five-member Charlottesville council, only Kathleen M. Galvin voted against eliminating the holiday. In a statement, Galvin, who is white, said the observance allowed the city to engage in "a national and regional dialogue on Jefferson's complex legacy that embodies both the promise of equality and individual freedom and the reality of white supremacy and oppression, thereby reflecting the many deep-rooted contradictions embedded in American culture and society today."

But Mayor Nikuyah Walker said that the conversation around Jefferson hasn't been that balanced. While the city has long acknowledged Jefferson, it hasn't given the same recognition to the "people who did the work, who built the buildings that wouldn't exist without them," referring to the University of Virginia.

"He enslaved more than 600 individuals, raped them and bred people for economic benefit," said Walker, who is black. The conversation about Jefferson is "balanced out to make people in positions of power and people with white skin feel comfortable about stories being told."

The recommendation drew fierce backlash, including from Gov. Greg Abbott. a Republican, who characterized it as "political correctness" run amok. The board kept the "heroic" language in the state curriculum.

Some historians say it's a mistake to apply the arguments used to dismantle Confederate symbolism to the nation's Founding Fathers.

"There is a difference between recognizing the people who founded the country and people who wanted to destroy the country," said Annette Gordon-Reed, a Harvard history professor and the author of "The Hemingses of Monticello: An American Family."

"You have to deal with the fact that the founding of the country was messy," she said. Jefferson "embodies the country. All the problems and contradictions and good and bad parts."

Joseph J. Ellis, author of the Jefferson biography "American Sphinx," noted that Jefferson's words in the Declaration of Independence have remained central to the nation's values, evolving with American society's notion of equality. President Abraham Lincoln viewed the words as an avenue to end slavery, Ellis said, and Martin Luther King Jr. used them to argue that the "promissory note" of inalienable rights had not been granted to black Americans.

"Jefferson is the most resonant figure in U.S. history" because of his words in the Declaration of Independence, though he was a "racist who believed black people were inferior," Ellis said. "What those words meant to him and what they mean now aren't the same."

The Betsy Ross flag, which might not have been designed or sewn by the Philadelphia-based upholsterer, has been a largely uncontroversial symbol in American history, often displayed at presidential inaugurations. At President Barack Obama's, it hung prominently from the Capitol building along with other historic U.S. flags.

Like many symbols of America, the 13-star flag has on rare occasions been brandished by members of far-right movements, according to Mark Pitcavage, the Anti-Defamation League's director of investigative research and a historian by training. But it has not been adopted or appropriated by the far right in the way that the Gadsden flag, with its "Don't Tread On Me" message, is now associated with the tea party.

"It's not a hate symbol," Pitcavage said.

The Betsy Ross flag does not appear on the Anti-Defamation League's list of 179 hate symbols, which includes some drawn from America's own past, such as the Confederate flag, which the Charlottesville marchers brandished in 2017 as they shouted racist and anti-Semitic slogans.

The online database includes an invitation to viewers to write in and suggest symbols.

"No one has ever written in suggesting the Betsy Ross flag, to my recollection," Pitcavage said.

John Coski, a historian at the American Civil War Museum, warned against simplifying what historic symbols stand for. Over the years, the Confederate flag has been "a widely and carelessly used symbol of many things, including the South as a distinctive region, individual rebelliousness, a self-conscious 'redneck' culture, and segregation and racism," Coski wrote in his 2005 book, "The Confederate Battle Flag: America's Most Embattled Emblem."

The Gadsden flag, named after the 18th-century general and politician Christopher Gadsden, has also been used as a countercultural and anarchist emblem.

Fitzhugh Brundage, a professor of history at the University of North Carolina at Chapel Hill - where student protesters last year tore down a Confederate statue known as Silent Sam - said that the meaning of symbols has always shifted. But today, he said, a historic symbol can be contaminated almost overnight.

"In a universe in which memes come and go in a matter in weeks, what is the half-life of that contamination?" he asked. "When can the Betsy Ross flag go back to what is was before it was contaminated?"

Eric Hobeck in Charlottesville, Virginia, contributed to this story.

Don't miss out on local history! Check out the Napa Valley Publishing archives!