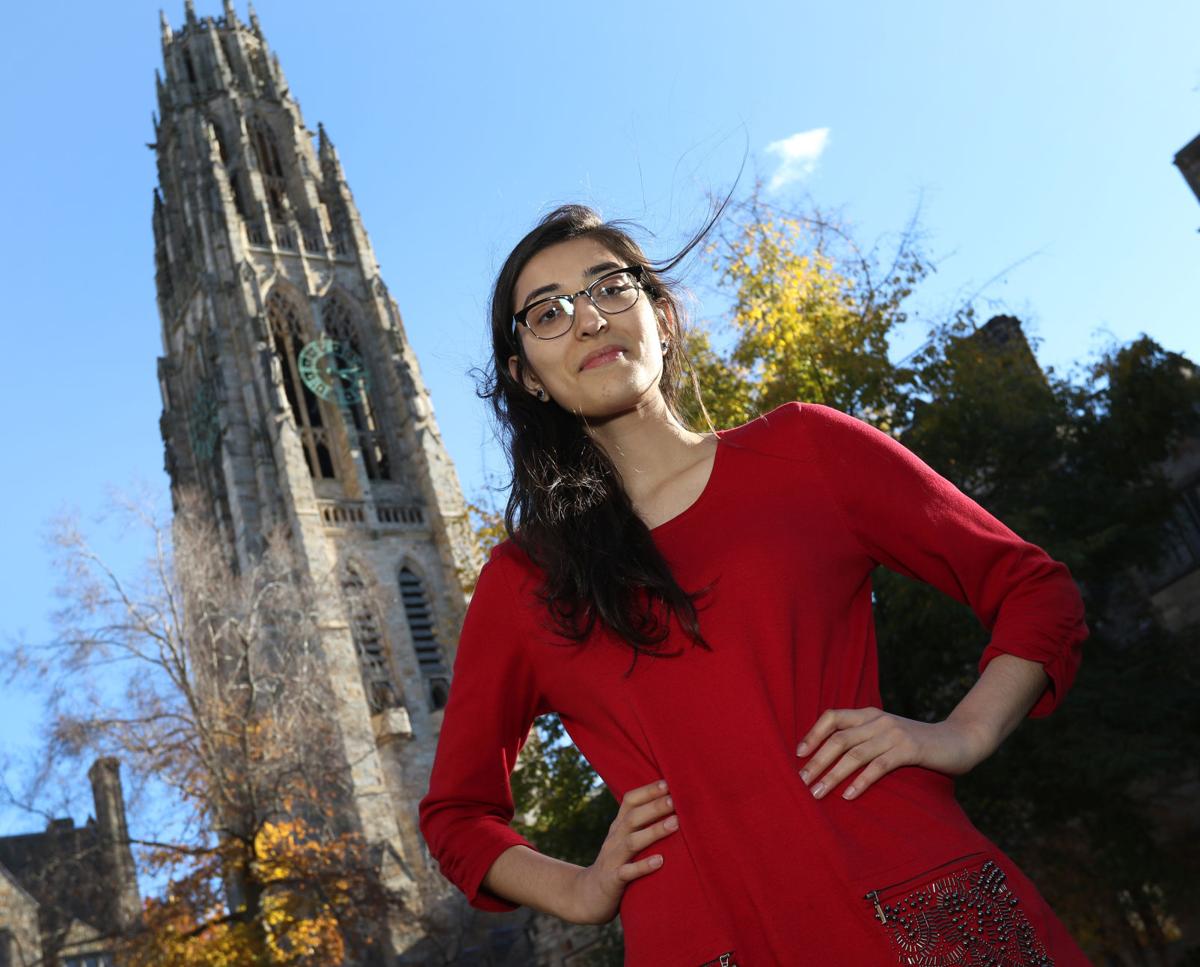 Zunaira Arshad, a senior from Hawthorne Woods, Ill., is pursuing a double major in global affairs and molecular, cellular, and developmental biology at Yale University. She says contact with international peers is invaluable. 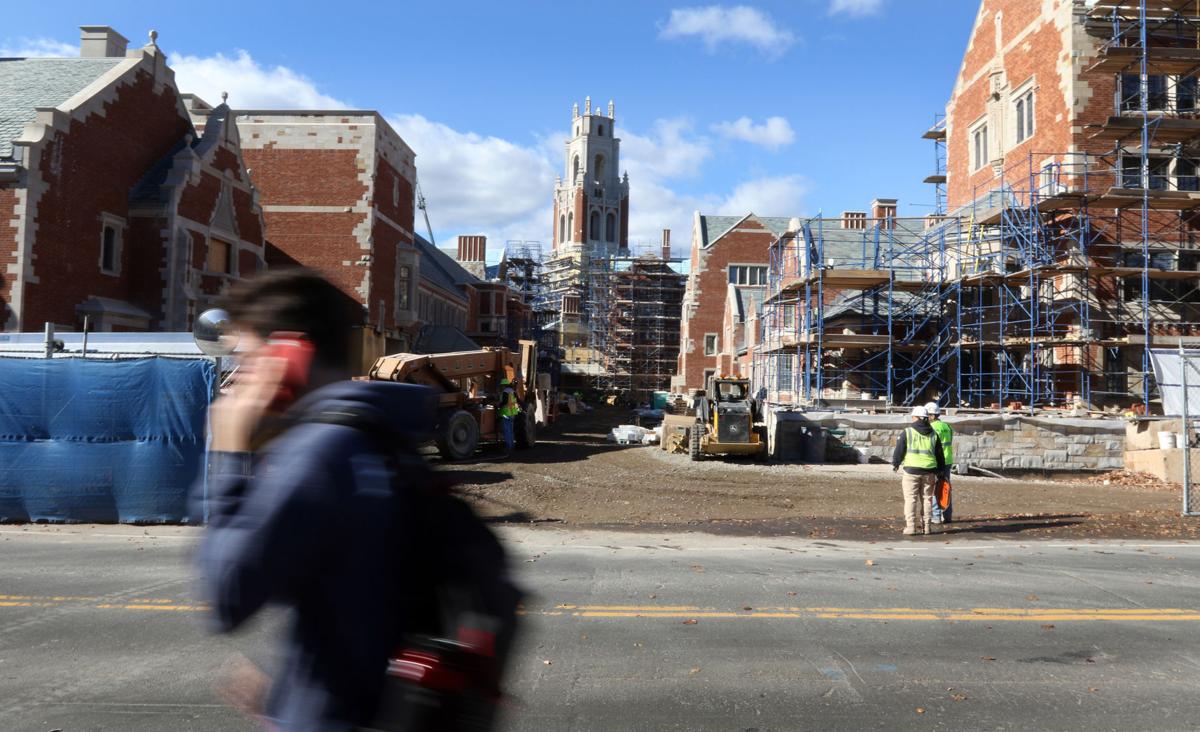 Yale University, in New Haven, Conn., is building two new residential colleges as it prepares to increase the size of its freshman classes, in part to accommodate growing international demand. 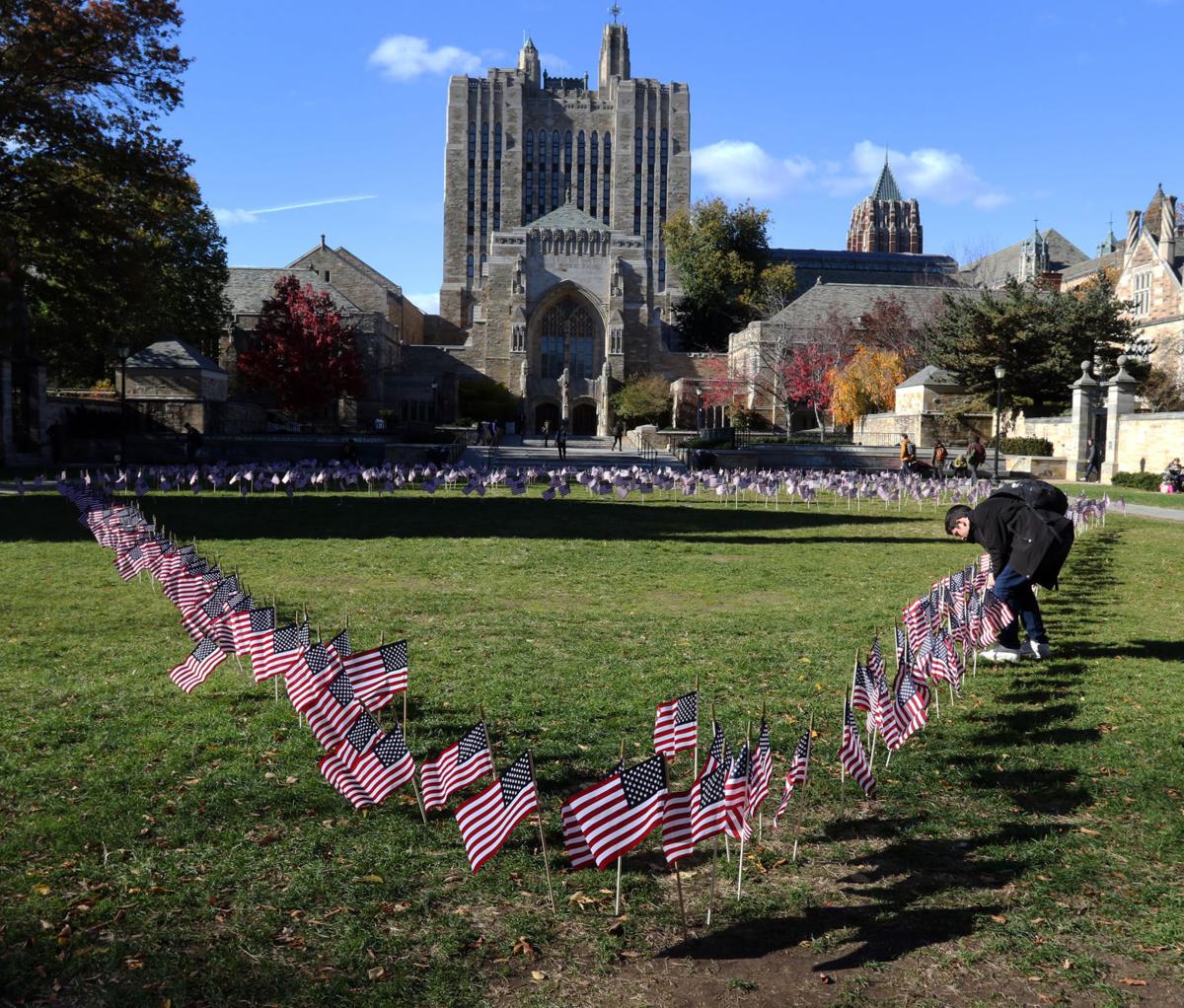 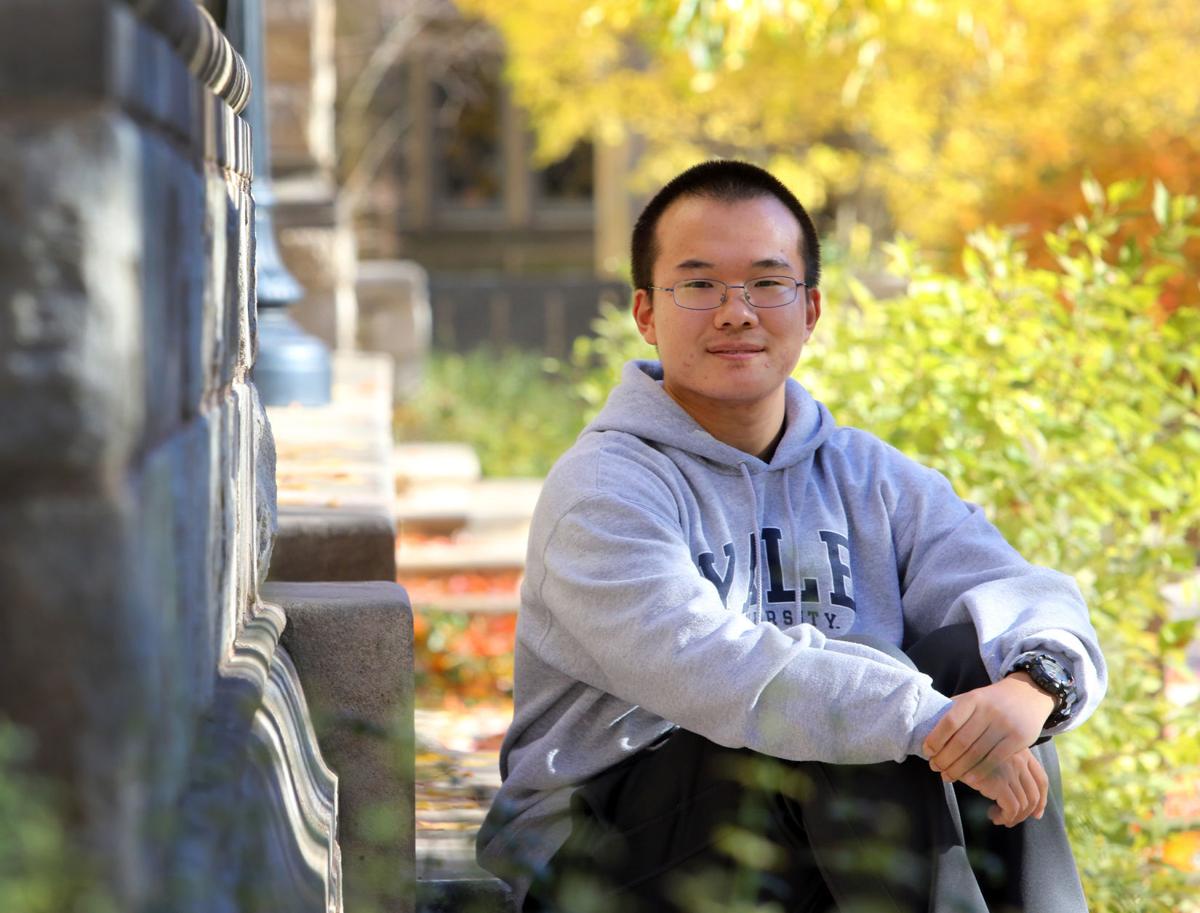 NEW HAVEN, Conn. -- A major increase in international enrollment in recent years has intensified the competition for entry to America's top private colleges and universities, as ever-growing numbers of applicants angle for the limited supply of seats.

That tension is particularly evident in the eight prestigious Ivy League schools: Federal data shows that their freshman classes grew slightly from 2004 to 2014 - 5 percent - while the number of incoming foreign students rose 46 percent. At the same time, applications to the schools shot up 88 percent.

At Yale University, where just 6 percent of 30,000 applicants are accepted, the foreign share of the freshman class has grown from single digits to 11 percent. As Yale's undergraduate enrollment has edged upward since 2004, foreigners have accounted for almost all of the growth, reflecting a deliberate strategy to deepen Yale's engagement with the world.

"We want to bring together an incredibly diverse student body - diverse in every way," said Jonathan Holloway, dean of Yale College. "If we want to train the next generation of global leaders, we better have the globe here."

Foreign and domestic demand grew so high that Yale has embarked on its biggest expansion since its undergraduate college opened to women in 1969. Next fall Yale will open two new residential complexes, a $500 million project to lift enrollment capacity 15 percent.

International growth has fostered an increasingly cosmopolitan culture on campuses across the country, with academic benefits for domestic and foreign students alike. It gives colleges an additional path toward ethnic and racial diversity, opening doors to students from Africa, Asia, Latin America and Europe. But it also injects pressure into the admissions scramble that U.S. high school seniors are starting to experience this month as schools release early-admission decisions.

Charles Deacon, dean of admissions at Georgetown University, said he is concerned that international enrollment could be nearing an unacceptable level at some schools by potentially crowding out qualified U.S. students.

"We're in a global world," Deacon said. "There certainly is an argument for the presence of foreign nationals at U.S. universities. But is there a tipping point where this is too many? That is an issue we have to reckon with."

The international share of freshmen at Georgetown rose from 3 percent in 2004 to 11 percent in 2014, on par with Yale. During that time, Georgetown's admission rate fell 5 points, to 17 percent. Deacon said those numbers are reasonable for a university in the nation's capital with a school of foreign service and a global profile.

"We think it works well for us," he said.

U.S. applicants to elite schools are largely unaware of the growth of international enrollment and what it could mean for their chances, said Bruce Vinik, an admission consultant in Montgomery County, Maryland. He said the subject could draw "pretty strong" reactions from students anxious about whether their top-choice schools will accept or reject them.

"Some kids would probably be upset it has increased competition and made it tougher to get into these colleges," Vinik said. "Others - quite a few, actually - would see the benefits" of diversity.

Except for a brief period after the Sept. 11, 2001, terrorist attacks, international enrollment at U.S. colleges has grown for generations.

"Based on history, we think the United States will continue to be a destination of choice and foreign students will continue to want to come here, for all the reasons they come here today," said Allan Goodman, chief executive and president of the Institute of International Education.

There were about 427,000 international undergraduates at U.S. colleges and universities in the 2015-2016 school year, according to the IIE. That was up 79 percent over a decade ago. The top supplier was China, followed by Saudi Arabia, South Korea, India and Vietnam.

Among these students is Yifu Dong, 21, a Yale senior from Beijing majoring in history. His father writes columns for a Chinese newspaper, and his mother is a civil engineer. They are a middle-class family, Dong said, and he receives financial aid.

"It's eye-opening for me," he said. "Your ideas are constantly being challenged. I really like this kind of education, the liberal arts."

The foreign influx has helped offset stagnation in the annual supply of graduates from U.S. high schools. Public universities often use international recruiting to help balance budgets when states cut funding for higher education. At the University of California at Berkeley, federal data shows the foreign share of freshmen in 2014 - 13 percent - was four times higher than in 2004.

Many tuition-dependent private colleges have similar motives, seeking to fill seats with students who can pay full or nearly full price.

But the calculus is different for top-ranked private schools with an abundance of qualified applicants. For these schools, going global often appears to be more of a strategic choice than a financial necessity. Some give international students significant financial aid.

The only Ivy League schools with single-digit international shares in 2014 were Dartmouth College (8 percent) and Cornell University (9 percent). The share at highly ranked Stanford University was 8 percent.

At the 50 schools that U.S. News and World Report ranks as top-25 national universities or liberal arts colleges, the number of freshman seats in those schools grew 14 percent from 2004 to 2014, to about 65,000. The number of freshmen who were foreigners more than doubled, to about 6,900.

Admission rates, meanwhile, plummeted, meaning that it is far more difficult for applicants to gain acceptance. About a dozen schools routinely reject at least 90 percent of applicants, a threshold rarely reached a decade ago. Stanford, the most selective, now turns down 19 of every 20 students seeking admission.

For U.S. applicants, the increase in foreign competition adds another layer of difficulty. They're now up against a growing pool of the world's best students.

The University of Chicago recently set a goal for international enrollment of 15 percent. The foreign share of its freshmen in 2014 was 11 percent, up from 9 percent in 2004. The university's admission rate plunged in that time, federal data shows, from 40 percent to 9 percent.

"To me it would be peculiar - given the evolution of problems in the world, the challenges the world faces, and the flow of ideas and capital and everything else - if we didn't have a much more global perspective embedded within the university," said University of Chicago President Robert Zimmer.

International students are often stereotyped as rich kids from abroad who can pay full freight. Many are wealthy. But enrollment officers at prominent schools deny that foreign recruiting is all about money.

"For us, it was really philosophical," said Katharine Harrington, vice president of admissions and planning for the University of Southern California, where 18 percent of freshmen in 2014 were international, up from 7 percent in 2004. "If this is truly a national and global university, we really do believe the undergraduate population ought to better mirror the world in which our students are going to live and work and make their way."

USC's admission rate fell in that decade from 27 percent to 18 percent.

At Emory University, the international share of freshmen tripled over a decade, to 17 percent in 2014. John Latting, Emory's dean of admission, said the growth reflected a spike in international applications. Fifteen years ago, he said, South Korea was big. Then China emerged.

"Now we see India, big time," he said, with that country supplying 44 freshmen this year in a class of about 1,360. That's equal to the number from Maryland.

Emory also has become more selective, this year admitting 25 percent of applicants. In 2004, it admitted 42 percent.

At Claremont McKenna, where international enrollment has soared, the school lets in about 1 in 10 applicants. In 2004, more than 1 in 5 were accepted. But Jefferson Huang, vice president for admission and financial aid, said foreign and domestic applicants are accepted in almost equal proportion.

Globalization is central to the college's appeal, he said: "Part of the reason domestic students want to come is because of what we've done here."

At Yale, U.S. students say contact with international peers is invaluable. Zunaira Arshad, 21, a senior from Illinois, said conversations with classmates from Syria and Turkey enriched her perspective on the Syrian crisis.

"I've learned to empathize and care about people and think about other people besides myself," she said. "There needs to be more of that. Please, don't let it be less."

Yale's push to globalize accelerated after the school celebrated its tricentennial in 2001. The university is one of a few to say that it considers all applications, domestic and foreign, without regard to financial need and meets full need for all who enroll.

"A big advantage for us from a marketing perspective," said Dean of Admissions Jeremiah Quinlan.

Several international students said they applied to Yale because of that policy. The full price of tuition, fees, room and board exceeds $65,000 a year. That doesn't include plane tickets and other expenses.

"Their financial aid package was the best," said Camila Franco, 21, a junior from Buenos Aires majoring in biomedical engineering. "I feel incredibly lucky to be here."

She said she chose Yale after applying to 11 U.S. schools, drawn to the university's global atmosphere.

"My roommate is from Burma," she said. "It has definitely opened up my mind."

The university receives about 5,000 international and 26,000 domestic applications a year. Foreigners are admitted at a lower rate, Quinlan said.

Quinlan said he is elated to be able to offer admission to between 300 and 400 more students next year as the university prepares to open the new residential colleges.

"I might be the happiest man on campus," he said. "Now we will be able to open up increased spots for students from all over the world."

Zunaira Arshad, a senior from Hawthorne Woods, Ill., is pursuing a double major in global affairs and molecular, cellular, and developmental biology at Yale University. She says contact with international peers is invaluable.

Yale University, in New Haven, Conn., is building two new residential colleges as it prepares to increase the size of its freshman classes, in part to accommodate growing international demand.