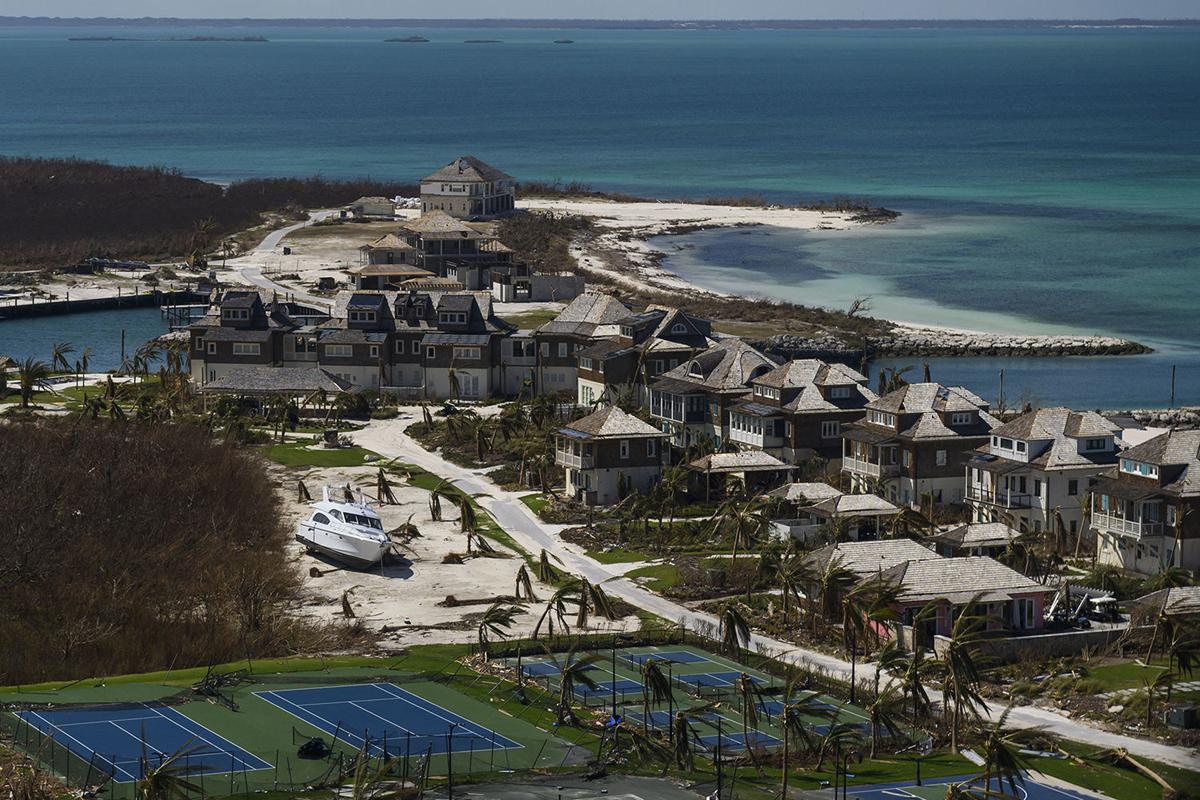 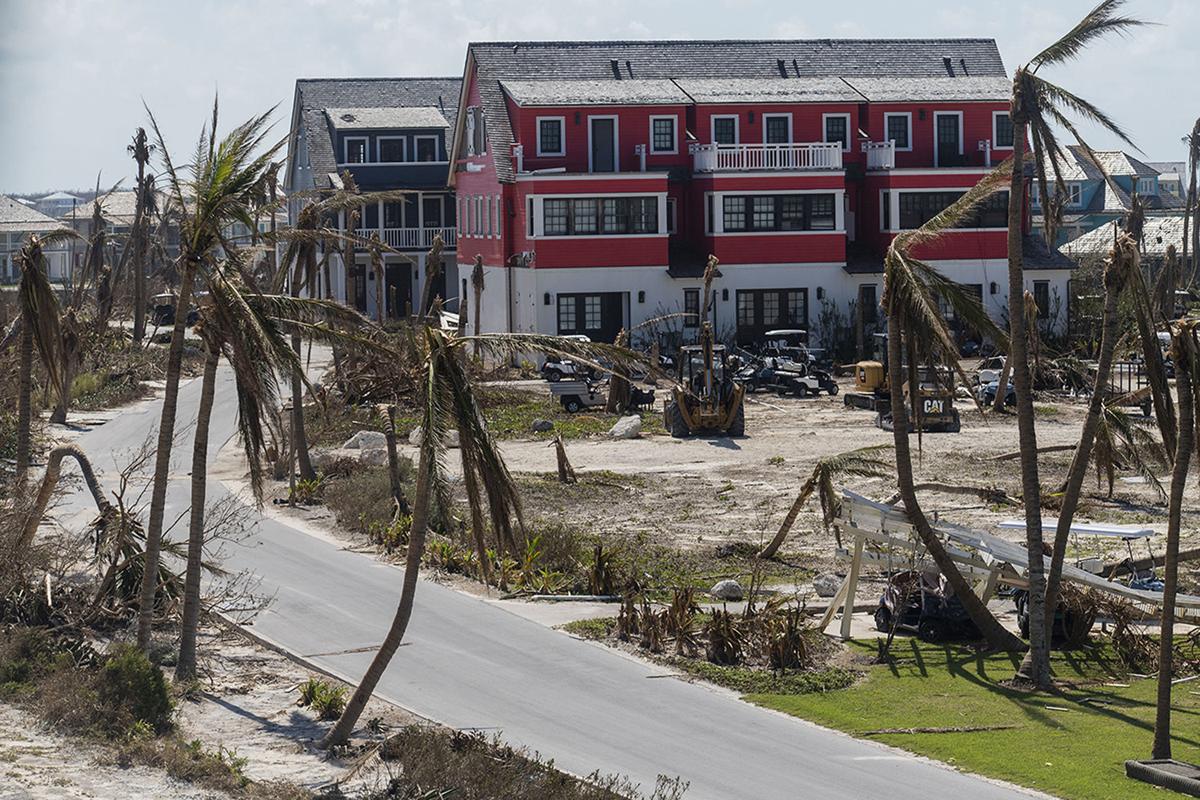 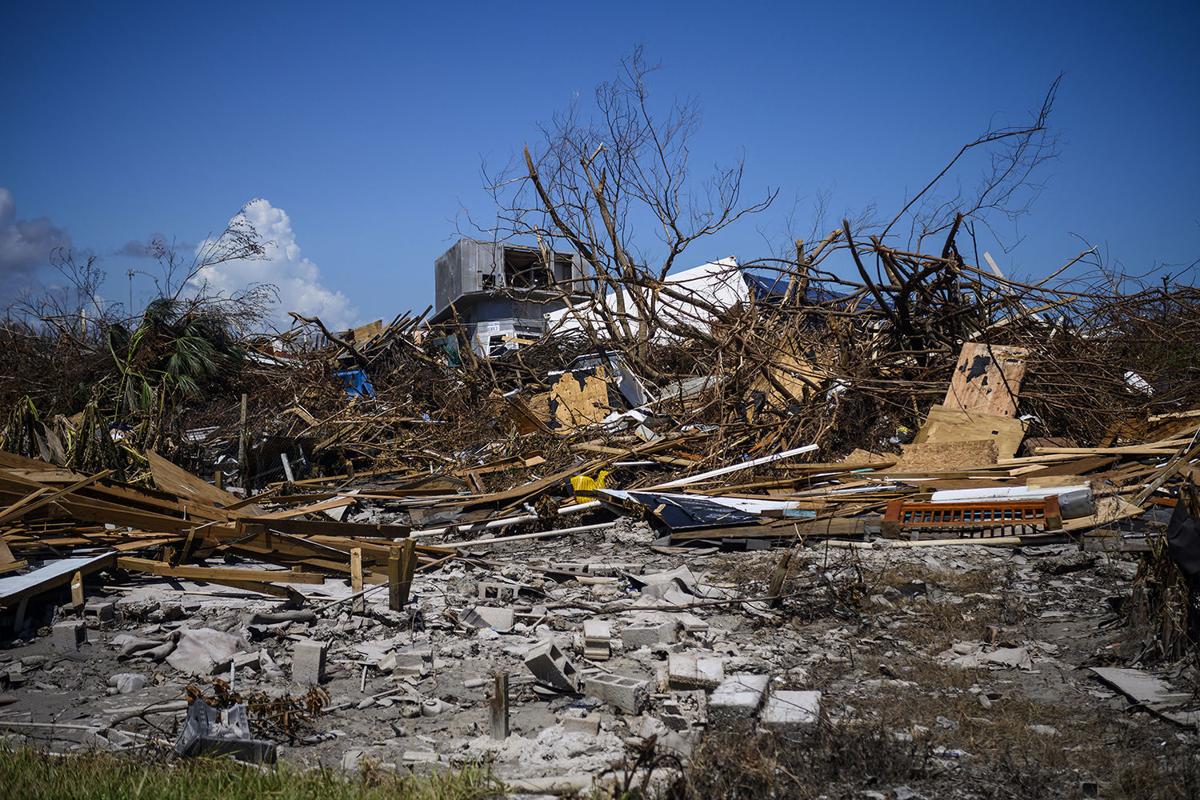 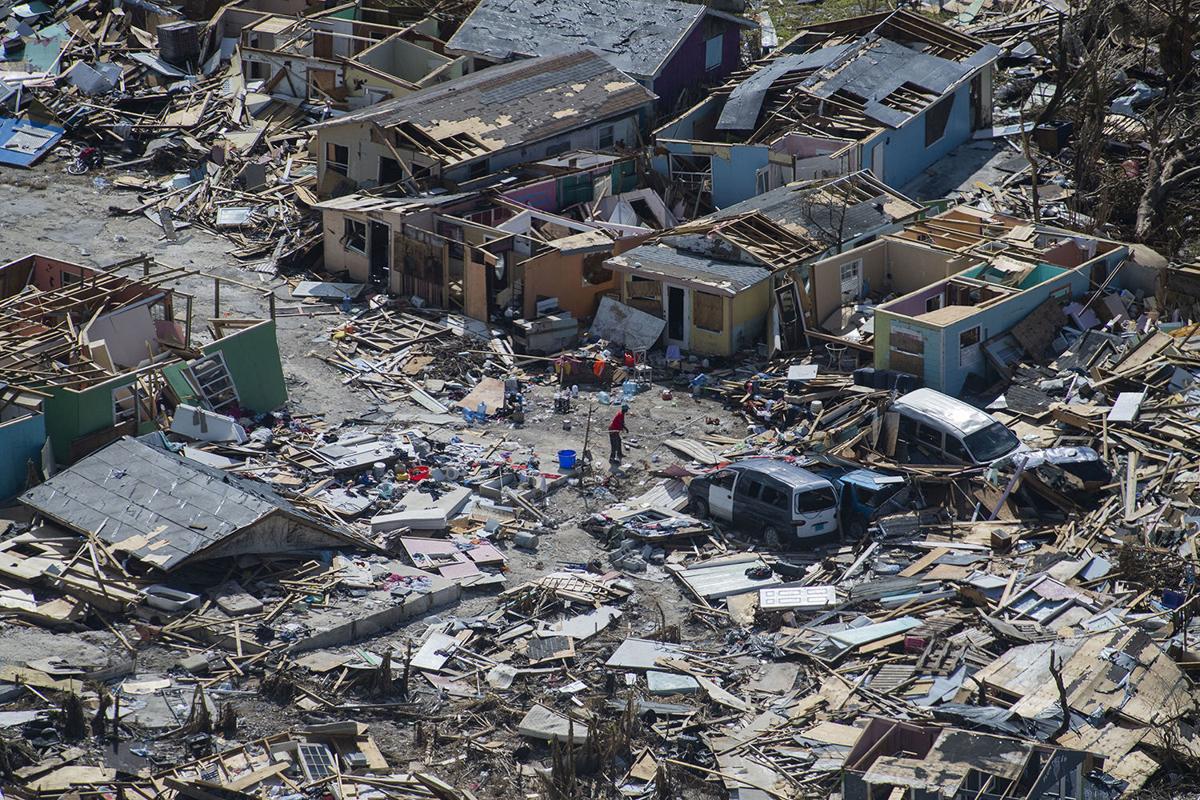 A man goes through the debris in the Mudd and Peas neighborhoods. 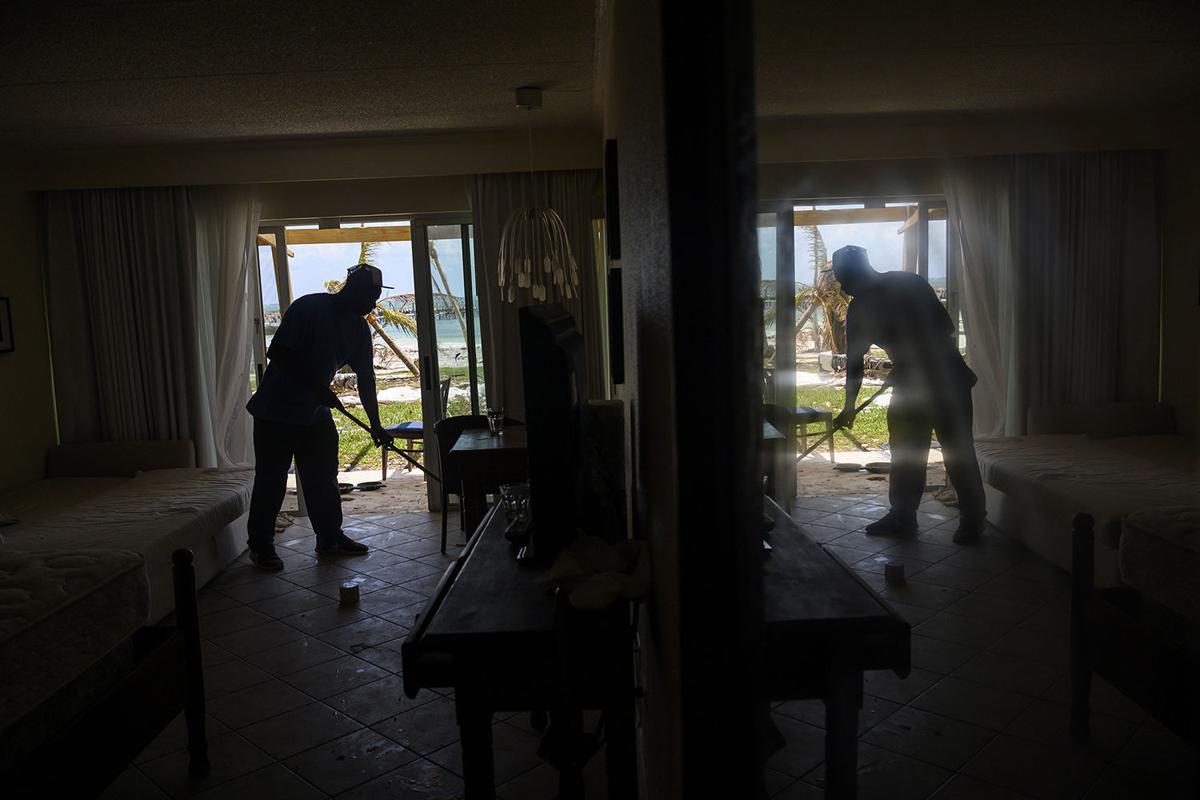 Jack Mentor, a member of the landscaping staff at the Abaco Beach Resort, cleans a room. Mentor sheltered at the hotel during the hurricane. Once it passed, he found his home in the Peas flattened, so he sent his family to Nassau and stayed. He wants to earn money cleaning up so he can rebuild his own home. 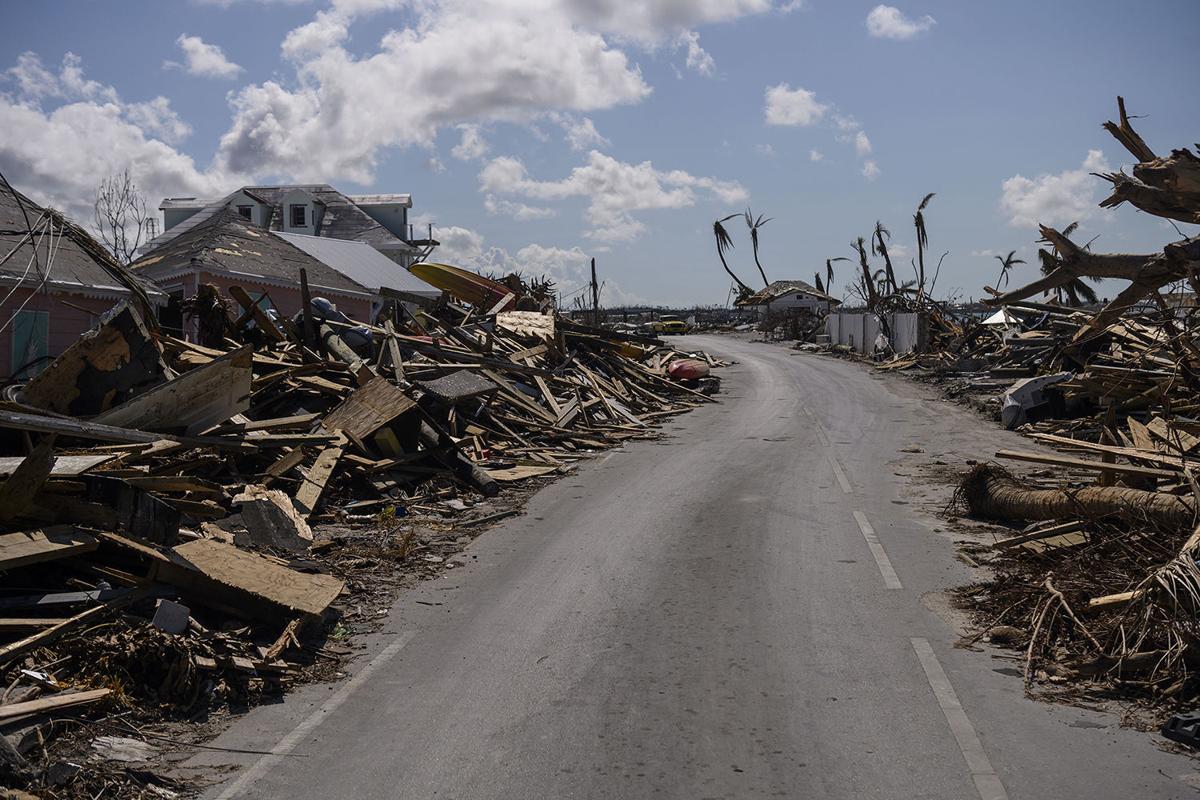 The Mudd, home to many workers at Baker's Bay, was flattened. 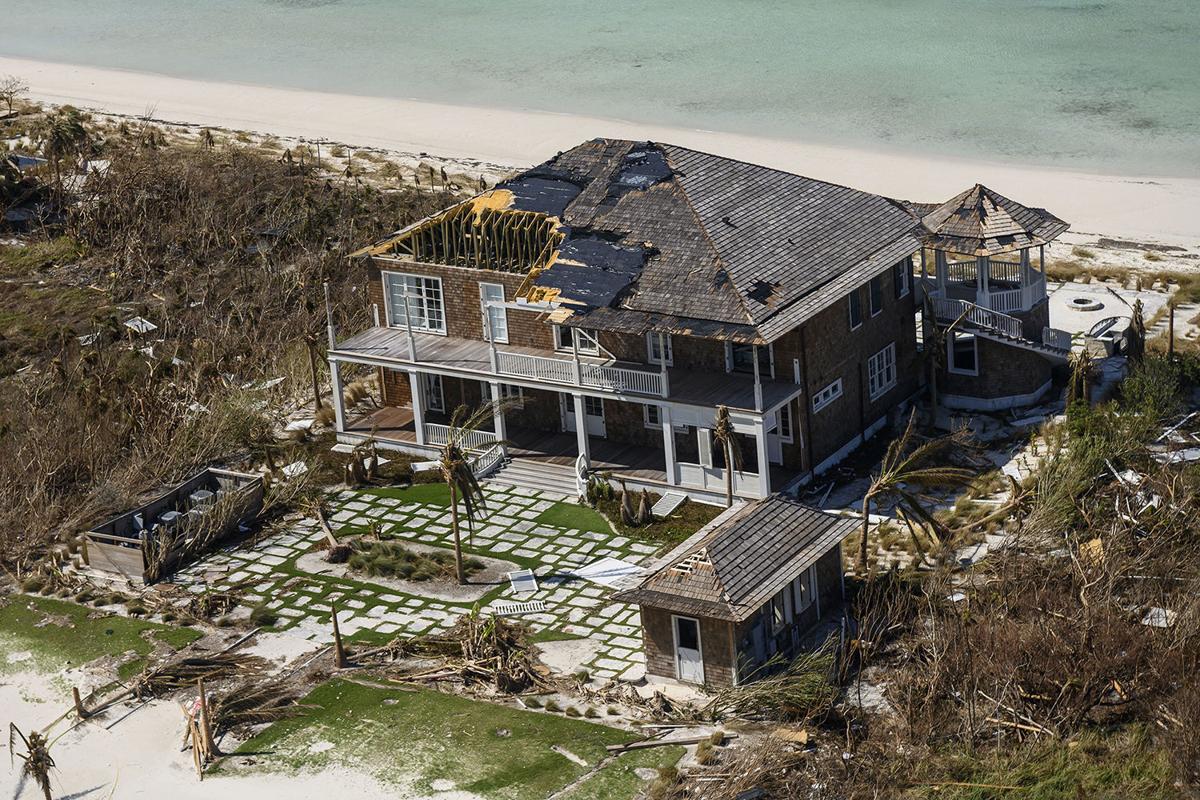 A house at Baker's Bay Golf and Ocean Club after Hurricane Dorian.

A man goes through the debris in the Mudd and Peas neighborhoods.

Jack Mentor, a member of the landscaping staff at the Abaco Beach Resort, cleans a room. Mentor sheltered at the hotel during the hurricane. Once it passed, he found his home in the Peas flattened, so he sent his family to Nassau and stayed. He wants to earn money cleaning up so he can rebuild his own home.

The Mudd, home to many workers at Baker's Bay, was flattened.

A house at Baker's Bay Golf and Ocean Club after Hurricane Dorian.

BAKER'S BAY, The Bahamas - Here in one of the Bahamas' most exclusive communities, the celebrity homeowners arrive in private jets. The cooks and cleaners and construction workers caught the ferry from the Mudd.

The Mudd, in Marsh Harbour on Great Abaco Island, was an informal settlement, built with abandoned construction materials on low-lying, flood-prone ground, ravaged periodically by fires. It was an open secret: The rich and famous here were served by - relied on - the residents of what the Bahamian government called "an unregulated community."

For years, wealthy visitors to Baker's Bay could ignore the precarious living conditions in the Mudd. But now, in the aftermath of Hurricane Dorian, that's no longer possible. The shantytown has been destroyed. Many were killed; the rest are homeless. The devastating human toll has exposed an economic dependency - there's no one to repair the mansions.

The inequality between rich and poor, tourist and worker, was laid bare as the storm approached. When Dorian made landfall on Great Abaco Island as a Category 5 hurricane, the people of Baker's Bay had cleared out. Its homeowners, almost all seasonal residents with primary homes in the United States or Europe, hired local workers to put up hurricane shutters and prepare for the storm while they tracked it from afar.

But The Mudd was full. Some residents wanted to stay to guard their homes and belongings. Others - many of them undocumented Haitians - fled to local churches for shelter. They said there was little opportunity to leave the island ahead of the storm.

Within hours, the entire community was flattened. Homes were blown to rubble. At least dozens were killed - the number climbs as more bodies are found.

Tom Brady, who has frequently stayed at Baker's Bay, posted an image of a heart in the colors of a Bahamian flag and a link to donate to the recovery effort. Michael Jordan, who has often golfed there, has contributed $1 million.

The two worlds here - the ultrawealthy and the vulnerable residents of settlements such as the Mudd - have coexisted for years. In February, tourists on a catamaran near the coast of Baker's Bay came upon the bodies of 28 Haitian migrants lured by construction and maintenance jobs whose boat capsized. The Bahamanian government, which had long accused Haitians of stealing jobs from locals, repeated long-standing promises to "eradicate" the shantytowns.

Mary Boyle, of Shaker Heights, Ohio, owns a second home in Great Guana Cay, not far from Baker's Bay. She rents it out for more than $1,000 a night.

"It's like India with its caste systems," she said. "You've got the white Americans and Canadians and European homeowners, all with different levels of wealth. And then you have the locals."

Now those two worlds are again uncomfortably linked. To rebuild places like Baker's Bay, residents know they need the workers of The Mudd to return. But The Mudd is gone. It's unclear if it will ever be rebuilt, and if its former residents will return.

"I'll put it as raw as I can," said Glen Kelly, the harbor master at the Abaco Beach Resort, one of the largest marinas in the Bahamas. "We've always depended on Haitian labor, legal or illegal, to maintain this place. Now it's a question of whether they'll be back."

As Dorian approached, the resort allowed some its workers to weather the hurricane inside.

"But eventually we had to turn people away," Kelly said. "There wasn't enough room."

At least two employees - a line chef and a dishwasher - died in the storm. Their bodies were found in the Mudd. Kelly said it's unclear whether they were among the workers who were turned away.

The Abacos Islands, which include both Baker's Bay and The Mudd, have long been a kind of semi-governed area. In the 1970s, a group of mostly white residents started an Abaco Independence Movement to turn the region into a libertarian refuge. The movement failed, but its ethos still pervades the islands.

When Discovery Land Co. built the Baker's Bay Golf and Ocean Club in 2005, the developer found little sign of the government's presence.

"We literally had to create resources for people of Abacos," CEO Mike Meldman said. "The infrastructure was nothing."

Even the islands' evacuation after the storm was managed partially by private companies, including Baker's Bay, which hired boats and planes. Now some of those companies are trying to lure their worker back.

The Abaco Beach Resort is at the forefront of that effort. It has a ready new clientele: Aid workers who need a place to stay.

"I'm getting hundreds of requests," said Harvey Moss, the guest experience manager. "It's about getting the word out - who survived, and is willing to come back and work."

A week after the hurricane destroyed their own homes, some of those workers have already returned. The simple truth: They need to repair other people's properties so they can fix their own.

"I lost everything," said Rudolph Ash, 54. "If I want to make the money to rebuild my house, I need a job."

Ash used to make $360 a week landscaping at the hotel. Now he's sweeping up debris, trying to make the hotel inhabitable.

On a break, he went back to look for his own home in the Mudd.

The members of the Baker's Bay Golf and Ocean Club have already raised $8 million for "immediate disaster relief needs of Bahamian citizens including Baker's Bay employees." The goal is $100 million.

But beyond the humanitarian mission, homeowners and developers there acknowledge, there's also the reality of their own needs: Baker's Bay and the exclusive enclaves in Great Guana Cay are going to need a huge amount of manual labor to rebuild. Two thousand of the employees on Baker's Bay came here daily from Marsh Harbor.

"There's no one there to build now," Meldman said.

He said he's considering docking a "mini-cruise ship" off the coast, where workers can stay while they build more permanent buildings to house some of the club's workforce.

Many have described the Mudd as a shantytown. Meldman said he wasn't aware of such conditions.

"I never saw that type of lifestyle," he said. "The employees and the members were truly a family."

Boyle, the Ohio woman, is trying to get her own workers back to help rebuild. She considers it the next step in the symbiotic relationship between Baker's Bay and the Mudd. She paid her employees as much as $25 an hour, she said, which supported a number families. She made sure her construction workers had health insurance, she said.

"Now there's a need for workers, and they know that there will be jobs and money here for them, more than in Nassau," she said.

"There's a lot of people who don't let their workers use bathrooms. I get criticized for being too nice to my workers, but you've got to treat a human like a human or you don't get good quality work," she said.

In recent years, the government has spoken of razing homes and deporting Haitians in the Mudd - but not building permanent homes or otherwise improving conditions for thousands of manual laborers.

In the wake of the earthquake, Bahamian Prime Minister has spoken broadly about rebuilding the country, but he has not specifically referred to The Mudd, a community that he once said breaks "every regulation and law and safety standard in the country."

For now, on the islands once imagined as a libertarian utopia, it's the private developers who have laid out a plan to rebuild the homes of their laborers.

"We need to create housing, even if it's temporary, because we don't want people to leave and not come back," Meldman said. "We need their help and they need jobs."

The Abaco Beach Resort has now managed to recruit a small team of workers, mostly men whose wives and children were evacuated to Nassau. For now, they're sleeping in the hotel's rooms, which are in various states of disrepair.

One of them was Jack Mentor, 49. On Tuesday morning, he was sweeping up debris.

"I owned my own house in the Mudd," he said. It had wooden walls, he said, painted yellow, and two bedrooms. He's committed to rebuilding it so that it can withstand another storm.