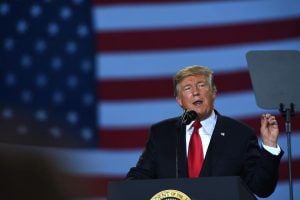 In the superheated conflict between President Donald Trump and the nation state of California, no issue is too trivial.

Every week, it seems, brings some new point of friction, giving the combatants another opportunity to issue searing denunciations and file new lawsuits.

Last week was no exception.

The Trumpies announced plans to add a citizenship question to the 2020 Census and California immediately sued to block it, claiming that it would discourage immigrants from filling out census forms due to fears about deportation, thus depressing the California count.

Were a citizenship question to depress the census count in California and other states with high immigrant populations, it could also depress their clout in Congress.

Census numbers are used every 10 years to determine how many congressional seats are assigned to each state. When California’s population was growing strongly, it could count on steady increases in its congressional delegation.

But the state’s population growth rate has declined. It received no new seats after the 2010 census and demographers say they believe that it would either be frozen again at 53 seats after the 2020 census or lose a seat to another, faster-growing state.

Low census numbers could also reduce federal aid funds coming to California, because they are often tied to census data.

Those are the potential consequences, and California leaders suggest that it’s another mean-spirited assault on the state, whose voters and politicians have as much disdain for Trump as he obviously has for them.

That’s possibly true, even though the administration says the citizenship question is needed to obtain data for enforcing the Voting Rights Act and other matters, as Politifact explains in a detailed examination of the issue.

However, this wouldn’t be the first time the census asked a citizenship question. It was a common feature of census forms for many years and even after it was dropped from all forms after 1950, it continued to be asked on so-called “long forms” and is still a feature of the Census Bureau’s American Community Survey that is conducted between the decennial censuses.

The Census Bureau explains why this way:

“We ask about people in the community born in other countries in combination with information about housing, language spoken at home, employment, and education, to help government and communities enforce laws, regulations, and policies against discrimination based on national origin. For example, these data are used to support the enforcement responsibilities under the Voting Rights Act to investigate differences in voter participation rates and to enforce other laws and policies regarding bilingual requirements.”

The current political sniping aside, we should know as much as we can about the makeup of the nation’s population, including how many of us are citizens. The proposal is to shift the question now on the American Community Survey to the full census, a question that simply asks about citizenship and doesn’t ask whether one is documented or undocumented.

Even so, as California political demographer Tony Quinn points out, a study funded by the Obama administration concluded, “The introduction of legal status questions does not appear to have an appreciable ‘chilling effect’ on the subsequent survey participation of unauthorized immigrant respondents.”

Moreover, it’s doubtful that the lawsuits filed by California and other blue states, such as New York, will succeed.

Federal law gives the Commerce Department the authority to place questions on census forms and until now, no one has ever challenged citizenship questions in past censuses or in the American Community Survey.

If Democrats don’t like the question, their remedy is to win the presidency and eliminate it from the 2030 Census.

Dan Walters: California booms, but when will it bust again?

10 movies that everyone is streaming right now