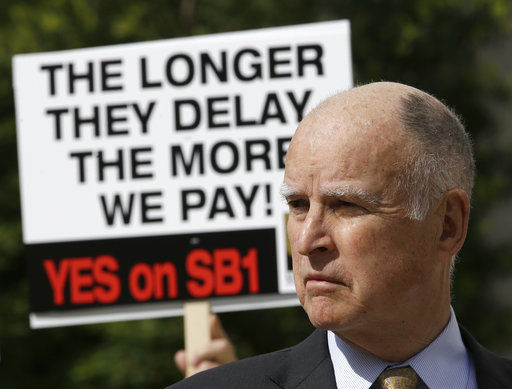 California Gov. Jerry Brown waits to speak a rally to urge lawmakers to approve a plan for a $5 billion-a-year tax and fee road repair measure during a rally Wednesday, in Sacramento.

California’s top politicians and interest groups celebrated a few months ago when the Legislature passed a package of taxes and fees to pay for long-neglected improvements to the state’s transportation systems.

The heart of the $5-plus billion per year revenue package is a 12-cent-a-gallon hike in gasoline taxes that took effect this month, just as other factors, including a spike in global oil prices, hit pump prices that were already among the nation’s highest.

Therefore, when they filled up their tanks this month, California motorists typically paid 40 to 50 cents per gallon more than they had been paying a month earlier.

As the tax hike went into effect, the Los Angeles Times and the University of Southern California’s Dornsife College of Letters, Arts and Sciences were conducting one their periodic public opinion polls.

The results were potentially devastating for the political, business and labor union groups that had pushed successfully for the transportation package after decades of delay. Most of California’s registered voters would opt to eliminate the gas taxes and fees, the polling found.

It wasn’t overwhelming – 54.2 percent preferring to repeal the package and 45.8 per cent favoring retention. But it was clearly worrisome to the sponsors because there are two repeal ballot measures in the preliminary processes of qualifying for the 2018 ballot.

“Put to a popular vote, the gas tax for infrastructure is in trouble,” Robert Shrum, director of the Jesse M. Unruh Institute of Politics at USC, told the Times. “I certainly would not want to start out at 47 percent support if I was in favor of this and there was a ballot measure.”

The partisan divide on the issue is quite evident in the USC/Times poll, with Democrats favoring retention and Republicans opting for repeal.

The state Republican Party clearly hopes that the gas tax issue will motivate its voters, helping the GOP stave off threats to several congressional seats, and perhaps demonstrate that it still has some relevance. It’s also backing a recall drive against one Democratic state senator who voted for the taxes and if successful, the recall would erase Democrats’ two-thirds supermajority in the Senate.

That said, pro-tax forces, which includes the state Chamber of Commerce and other business groups, probably will spend much more money to defend the package than repeal groups can muster.

There are also many more Democratic voters than Republicans in California, so if one or both of the repeal measures make the ballot, voter turnout could be a key factor in the outcome.

Tapping transportation users for more money to fix transportation systems makes perfect sense. The taxes and fees may pinch motorists, and hit the poor particularly hard, but the opponents haven’t identified any equivalent alternative if they are repealed.

If repeal succeeds, the state’s highways, streets and transit systems will continue to deteriorate and Gov. Jerry Brown’s successor and legislators will have to deal with it.

One option might be to divert more revenues from the sale of carbon emission credits under the state’s cap-and-trade program to transportation, and less, or perhaps none, to Brown’s pet bullet train project.

It wouldn’t completely backfill the repealed gas taxes, but in terms of enhanced mobility, it would not be a bad use of cap-and-trade revenues, many of which are being indirectly paid by motorists.

Dan Walters: Another reminder that there’s no free lunch

Short-term expediency, such as boosting benefits without putting aside money to pay for them or letting maintenance slide because raising gas taxes is politically difficult, just makes the eventual days of reckoning that much more difficult.

California motorists who filled their cars’ gas tanks Wednesday paid an extra 12 cents a gallon, thanks to a multibillion-dollar package of im…

California’s housing crisis has spawned several other socioeconomic dilemmas, the most important being a transportation crunch.

Dan Walters: Everyone should be ashamed for hot mess of Newman recall

The Josh Newman recall drive is one of those petty, self-serving political exercises that feed the public’s cynicism. All of those involved – save, perhaps, Newman himself – should be ashamed of themselves for wasting the public’s time and money.

Dan Walters: California politicians lured by easy money, but somebody must eventually pay

The late Glenn Frey’s song about the international drug trade, “Smuggler’s Blues,” contains a phrase that resonates in politics as well: “It’s the lure of easy money, it’s got a very strong appeal.” Politicians are habitually lured by easy money, which is defined as money they can spend without directly taxing their constituents, but somebody […]

The post California politicians lured by easy money, but somebody must eventually pay appeared first on CALmatters.

Dan Walters: Brown preaches carbon reduction, but does he do it?

Jerry Brown, like most of humankind, is a mixture of positive and negative tendencies, and sometimes they run together.

Efforts by Republicans to repeal California’s new gas taxes may be ill-considered, but they deserve a fair chance at persuading voters.

Dan Walters: How far can Democrats go to help unions?

Undeniably, California’s dominant Democratic Party is joined at the hip with labor unions, even though scarcely a sixth of the state’s workers…

California’s high school graduation rates, once abysmally low, have improved somewhat in recent years, although the factors in that improvement are a little cloudy.

California’s looming shortage of college-educated workers has been well-documented, particularly in a series of reports by the Public Policy I…

It’s high time that Brown, the bullet train board he appointed and other project advocates prove that there’s a practical way to build it.

Were Newman and Persky to be ousted, it could bring more chaos to California’s already fragile structure of governance.

Collecting more money from motorists and spending it on transportation improvements is the right thing to do because it needs to be done. Ginning up an overblown, self-serving economic “analysis” undermines the integrity of the act.

A measure to repeal California’s hefty new increases in taxes and fees on motorists, more than $5 billion a year, is awaiting signature verifi…

California Gov. Jerry Brown waits to speak a rally to urge lawmakers to approve a plan for a $5 billion-a-year tax and fee road repair measure during a rally Wednesday, in Sacramento.

Trusting societies are overall happier. A happiness expert explains why

Watch Now: Hundreds of snails crawl into yard in Vietnam, and more of today's top videos

Gun in 8-year-old's backpack goes off at school in Chicago, mom charged

This teen was targeted in a sextortion scheme. Hours later he took his own life