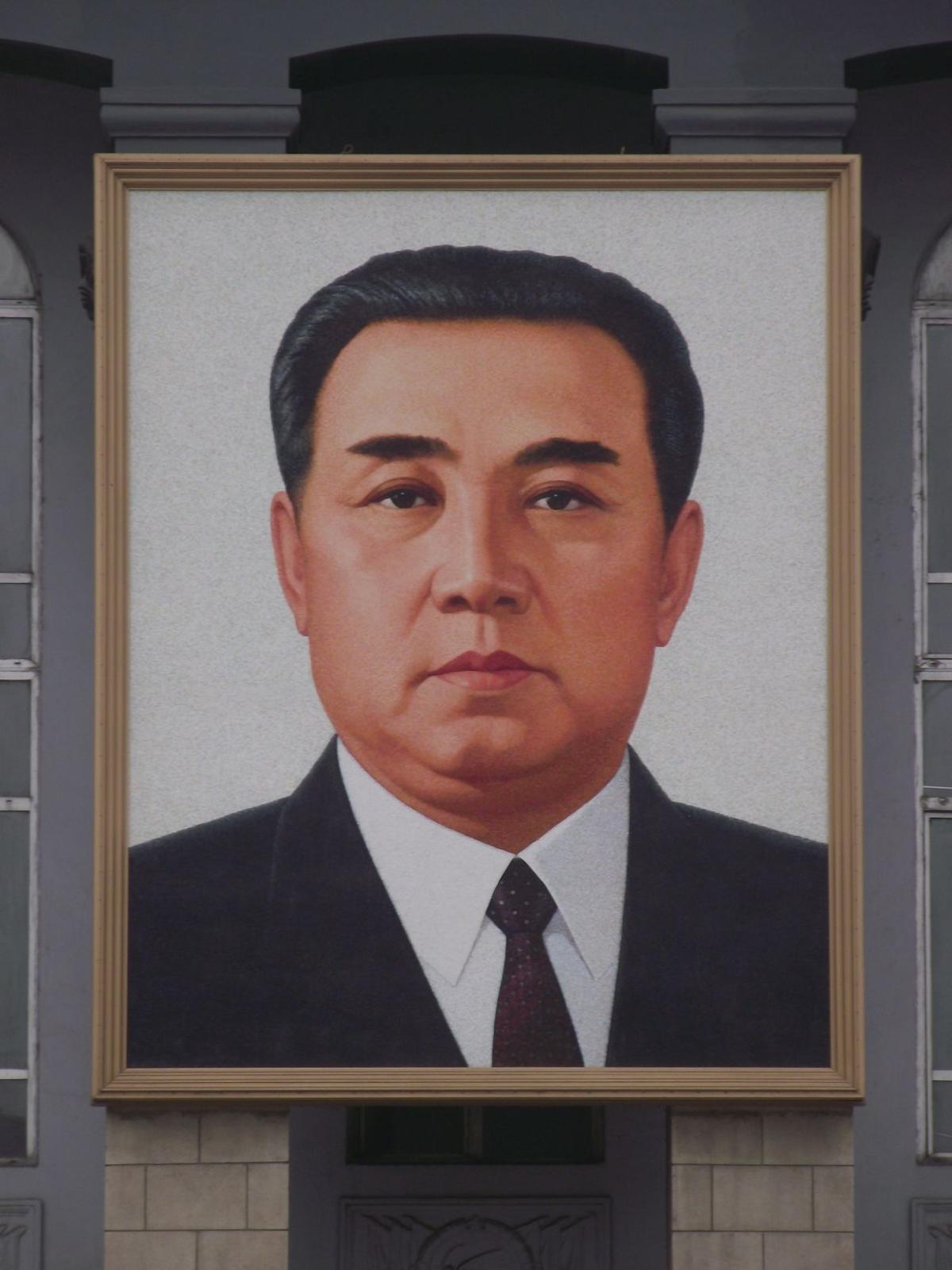 A portrait of the first North Korean leader Kim Il Sung, in the headquarters of the Workers’ Party of North Korea. 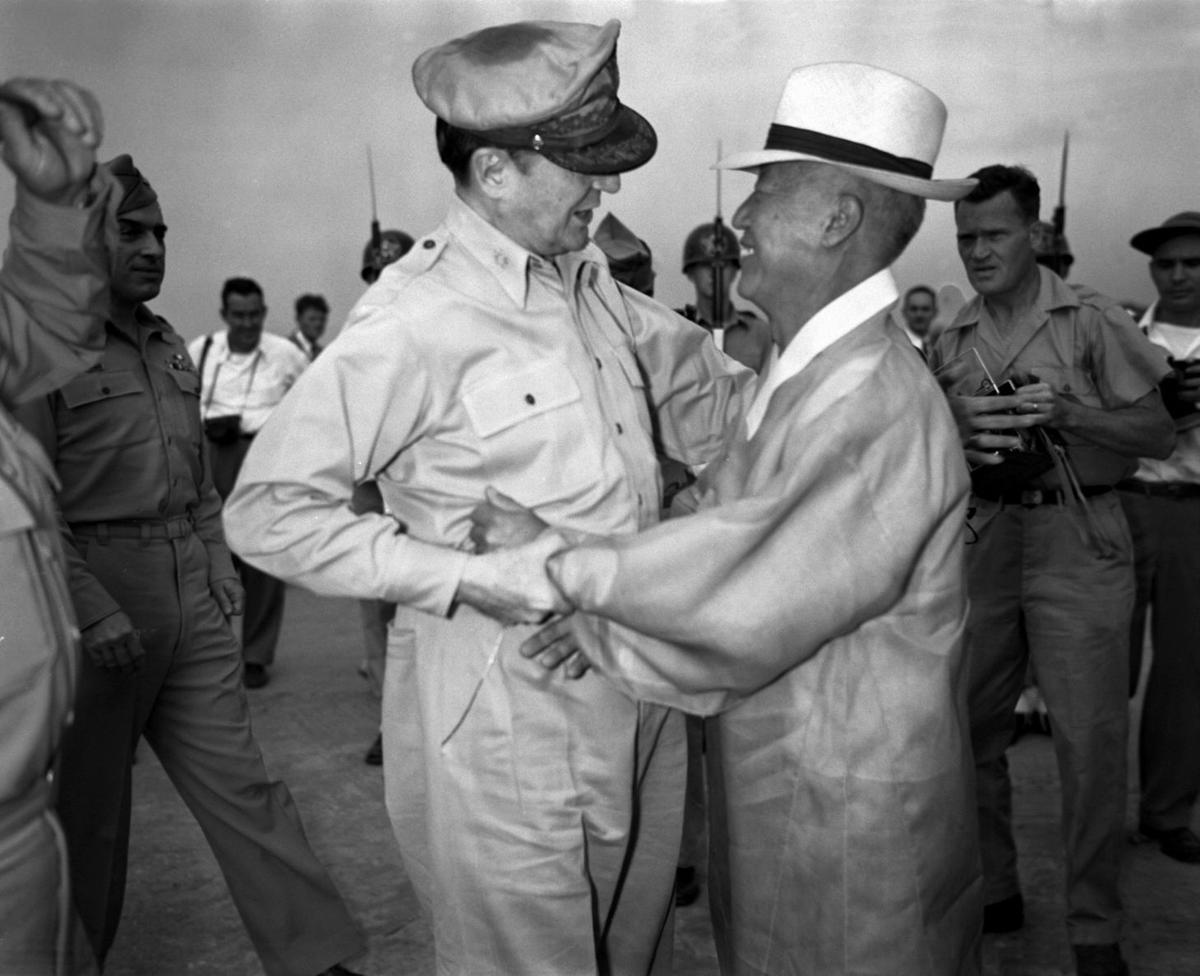 South Korea’s first president, Syngman Rhee, and U.S. Gen. Douglas McArthur great each other at Kimpo Air Force Base on a visit prior to the outbreak of the Korean War. 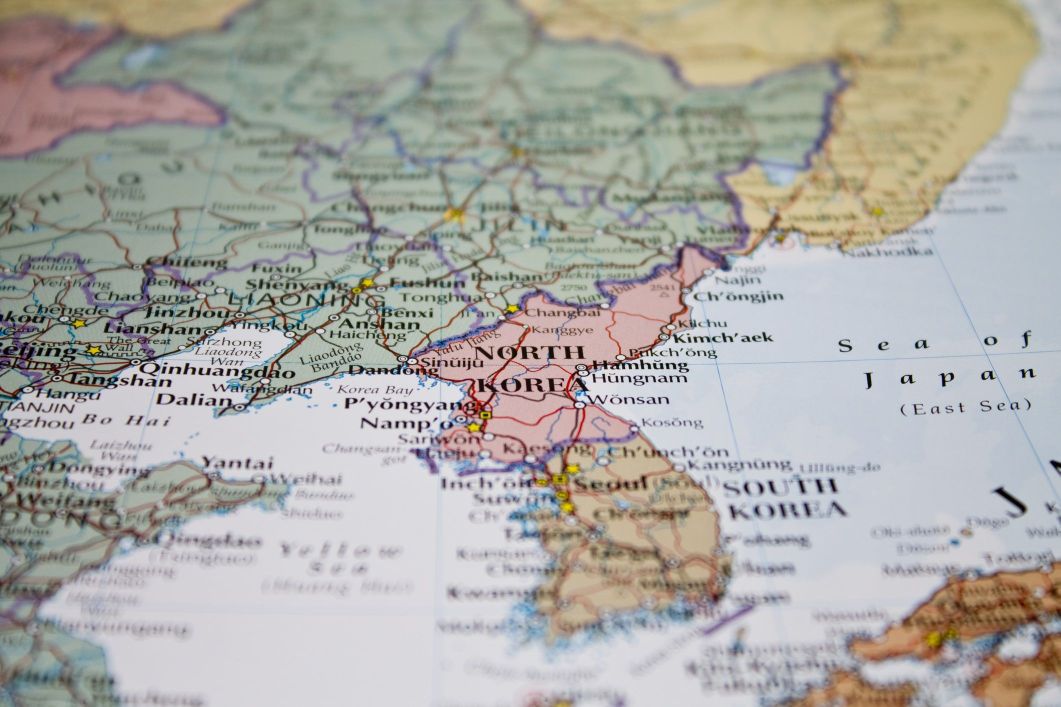 A modern map of North and South Korea, showing the dividing line hastily drawn by U.S. planners as World War II ended. That line, the 38th parallel, has become the defacto permanent border between the two countries.

Sixty-six years ago at 4 a.m. on a rainy Korean Sunday, June 25, 1950, North Korea attacked South Korea. Spearheaded by 150 T-34 tanks and supported in the air by 200 Yaks and Stormoviks—all Russian-made — a well-trained 135,000-man North Korean People’s Army blitzed across the boundary of latitude 38th north parallel.

Much earlier, during World War II at the Cairo Conference of Dec. 1, 1943, Allied leaders Franklin Roosevelt, Winston Churchill, and Chiang Kai-Shek had determined that “in due course, Korea shall become free and independent.” (Josef Stalin could not attend due to his nonaggression pact with Imperial Japan.) Upon liberating Imperial Japan’s Korean colony, an Allied trusteeship of the U.S., Britain, Russia, and Nationalist China was to administer Korea’s fledgling government for “twenty to thirty years,” to exercise the victors’ burden regarding reemerging Korea.

At the Yalta Conference in February 1945, the Big Three (FDR, Churchill, and Stalin) next agreed that Russia would enter the Pacific War no later than three months after the end of the war in Europe. On Aug. 8, 1945, the Soviet Union duly declared war upon a stunned Japan, greatly altering postwar East Asia’s character.

Meantime, America’s wonder weapons in the form of two atomic bombs, dropped on Hiroshima, Aug. 6, 1945, and on Nagasaki, Aug. 9, 1945, had already rendered superfluous Russia’s belated military entry in East Asia. Not wishing to be reduced to a radioactive wasteland, Japan bowed to surrender on Aug. 15, 1945. Four days before, a Russian occupation army was moving into northern Korea.

Simultaneously, on Aug. 10, 11,000 miles away in the U.S. War Department offices at the Pentagon on the Potomac River, harried Far Eastern Affairs officers were instructed to draw a line of equal partition on a map of Korea. Ostensibly drawn to separately accept the surrender of Japanese troops, the line was to prevent untrustworthy Soviet Russia’s having all of Korea.

Assigned to the daunting task by emerging Cold Warrior John McCloy, who was then a supervisor, were army colonels, 36-year-old Dean Rusk and 35-year-old Charles Bonesteel III. Hastily, they did so by 10 p.m. on that fateful August night.

Inquiring initially as to whether a demarcation line should perhaps wisely follow the provincial boundaries in Korea, they were instead told to find a quick easy straight- line map division reference instead. (Many people, including for example, Winston Churchill, were not aware of Korea’s map location—let alone of a line bisecting it.

When the 40th and 39th parallels (the latter on the 100-mile-wide “neck” of Korea) were considered, it was felt that they were too far north for the Soviets to accept either. By “great Virtue,” the mapmaker’s 38th parallel, which split the peninsula roughly in half, was therefore used. This would provide the American sphere in the south with Seoul, the capital and also the nearby Kimpo Airport, the largest in Korea. (Fortuitously for Washington, Russia tacitly accepted the 38th parallel line.) Tragically however, in selecting a handy surveyor’s line of latitude at 38 degrees north of the equator, at one stroke, the Korean people, their common culture, language, economy, and topography had also become at the same instant, blithely divided by the U.S.

Although apparently considered by U.S. planners as a temporary division, an indefinitely long-term bipartite Korea ironically was created. Because of Korea’s large family clans of up to 100, 10 million greater family clan members, or one-third of the entire 30 million population of Korea were sundered. Two million North Koreans had meanwhile emigrated to the south, leaving the ore-rich north with 9 million inhabitants, and mostly agricultural South Korea now at 21 million.

In a hectic “scramble move” on Sept. 8, 1945, the U.S. Army’s 24th Corps of weary Pacific fighting veterans under General John Hodge arrived at the port city of Inchon as the U.S. occupation force in southern Korea. From 1946-1947, a bickering Joint Soviet-American Commission failed to peacefully reunify Korea. In May 1948, a United Nations Commission on Korea presided over an election in the southern sphere, in which 73-year-old returned exile from America, Syngman Rhee, was ratified as the first “democratic” president of the new Republic of Korea.

In the north, by September of 1948, 36-year-old Kim Il Sung, formerly Kim Songju, was installed as the first premier of the Democratic People’s Republic of Korea (DPRK). Kim Il Sung was a nom de guerre, which stemmed from his guerrilla activities against the Japanese in Manchuria and northern Korea during the 1930s. Kim also became a part of the Special Sniper Brigade, composed of Russians, Chinese, and Koreans that fought the Japanese from 1942-1945.

An indoctrinated legendary Red soldier, he emerged from World War II a stalwart protege of Stalin. Russian forces left Korea in December of 1948; American forces departed on June 29, 1949, although a Korean Military Advisory Group of 482 Americans stayed on in the south. Both Syngman Rhee and Kim Il Sung had deadly identical priorities: to reunite all of Korea by force under the respective ideology of each.

Capitalist Rhee’s motto to “advance north” was countered by Communist Kim’s to advance the “Fatherland Front” southward. Reticent to provide tanks, heavy artillery, and jet aircraft to Rhee, the U.S. demurred. However, an avuncular Stalin provided Kim Il Sung modern weapons and a monetary loan. By January 1950, Stalin believed that the United States would not move to rescue South Korea if North Korea attacked. This was partly because the U.S. had announced that minor South Korea was outside of its Pacific defense perimeter of the Aleutians, Japan, Okinawa, and the Philippines.

“Uncle Joe’s” approval gave Kim II Sung his war. Prior to that, North and South Korea had made small cross-border raids on each other’s territory. Kim II Sung claimed that his attack on South Korea was just such a retaliation for a border raid that Rhee had conducted on the previous day, June 24, 1950. It was a false claim as the North Korean People’s Army used its seven best infantry divisions in an all-out offensive to conquer South Korea. A full-scale Korean civil war thus began on Sunday, June 25, 1950, with half the Republic of Korea army on weekend leave.

Taken by surprise was the 38,000-man Republic of Korea Army, the small nucleus of a glorified 100,000-man-plus constabulary. Also surprised was Supreme Commander Allied Powers Far East General Douglas MacArthur, the U.S. military magistrate of still-occupied Japan, who remarked anyone having an interest in either Korea or Indochina should “have their head examined.”

At the Korean crossroads, President Harry S. “The Buck Stops Here” Truman, whose pet domestic project was unparalleled prosperity in post-World War II America, must make his toughest decision between guns and butter.

Futini is a Civil War enthusiast and lives in Napa.

A portrait of the first North Korean leader Kim Il Sung, in the headquarters of the Workers’ Party of North Korea.

South Korea’s first president, Syngman Rhee, and U.S. Gen. Douglas McArthur great each other at Kimpo Air Force Base on a visit prior to the outbreak of the Korean War.

A modern map of North and South Korea, showing the dividing line hastily drawn by U.S. planners as World War II ended. That line, the 38th parallel, has become the defacto permanent border between the two countries.

Not real news roundup: Here's a look at what didn't happen this week

The best college basketball players of the last decade are ...