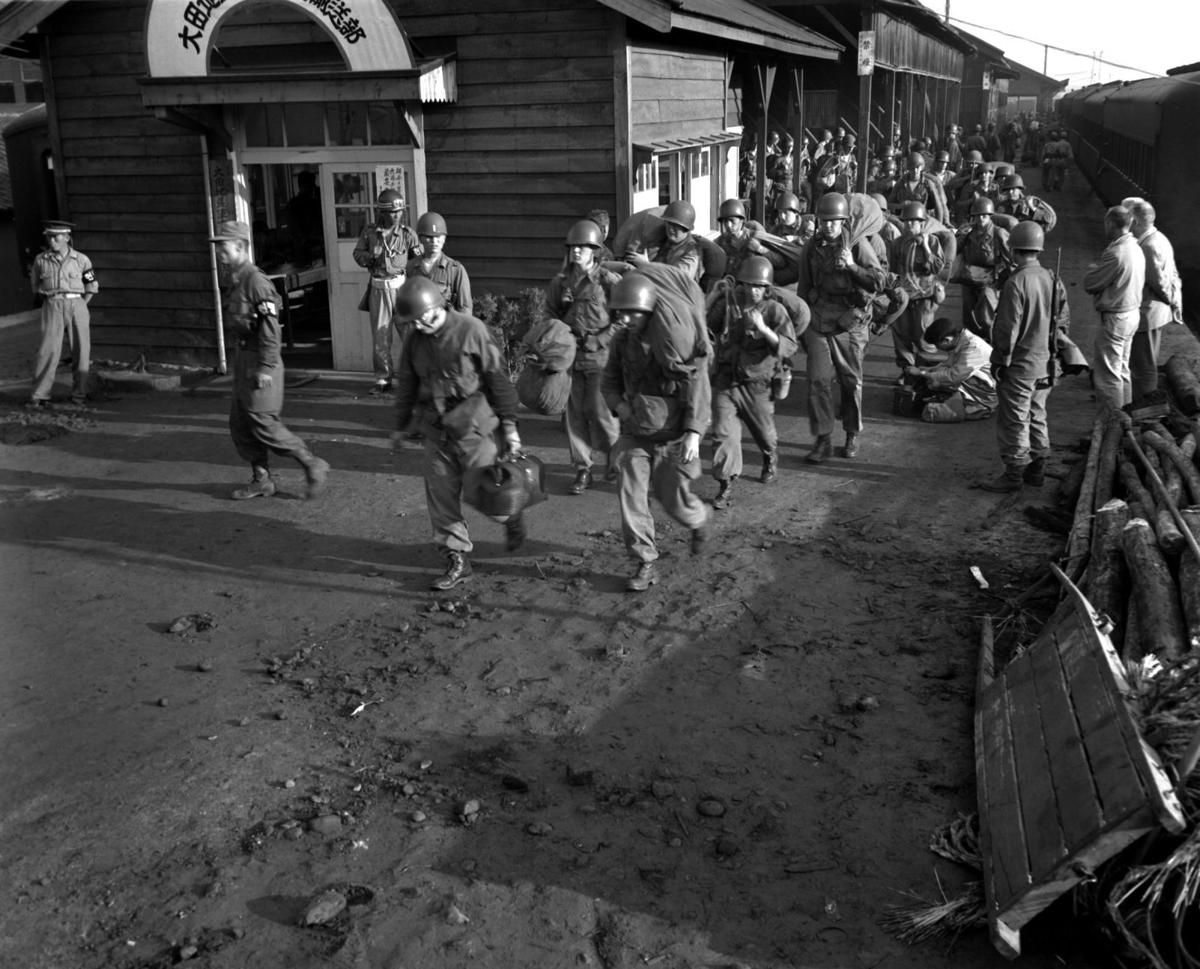 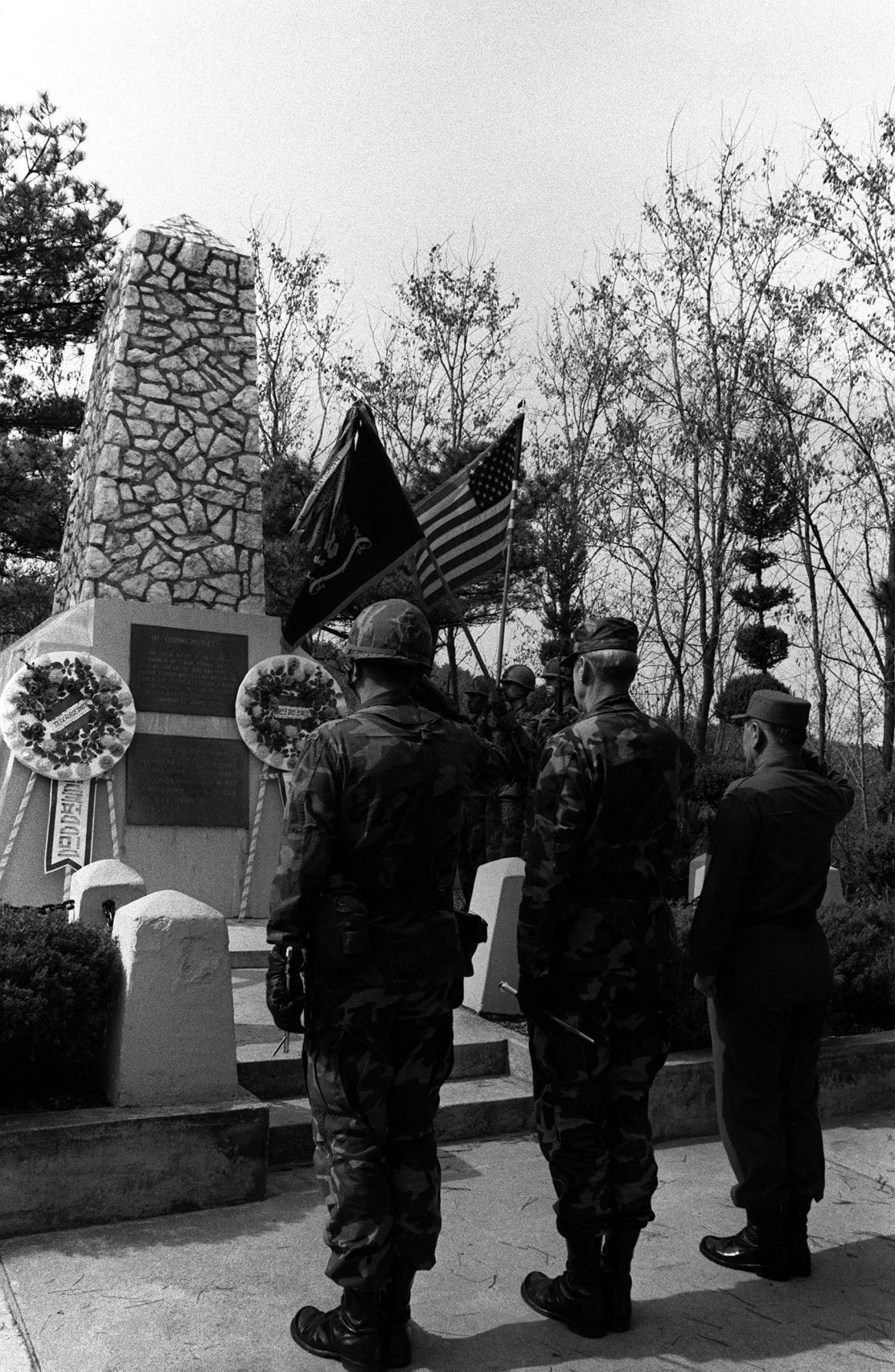 A commemorative ceremony is held at the Task Force Smith Memorial in honor of the men who fell near this spot on July 5, 1950. From left to right are Lieutenant Colonel Tilden Ried, Commander, 1st Battalion, 21 Infantry; Major General Alexander M. Weyand, Commander, 25th Infantry Division, and General Park Noh Young of the South Korean army. 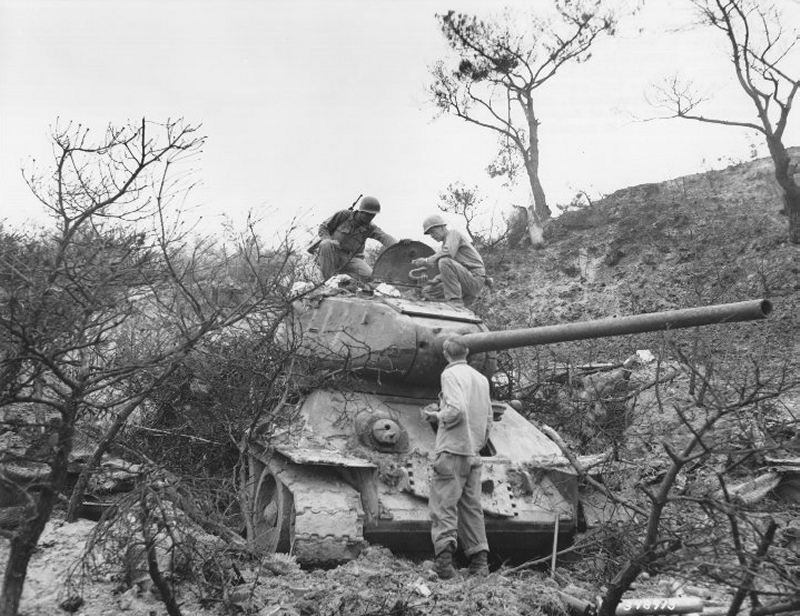 G.I.s examine a damaged North Korean T-34/85 tank similar to the ones that attacked American forces near Osan on July 5, 1950.

Editor’s note: This is part of an occasional series marking the anniversary of the start of the Korean War. On July 5, 1950, the first battle involving American troops in the Korean War took place near Osan, 30 miles south of fallen Seoul, South Korea. Flown from Japan to South Korea by six USAF C-54 Skymasters was the 406-man emergency Task Force Smith. It was a stopgap unit led by 34-year-old U.S. Army Lt.-Colonel Charles Smith. Landing at an airstrip near Pusan on July 1, 1950, it marked a Korean War first, in which combat troops could immediately be brought in by air at war’s advent.

Entraining 120 miles north to Taejon on July 4, 1950, Task Force Smith combined with Lt.-Colonel Miller Perry’s 52nd Field Artillery Battalion of six towed 105-mm howitzers, two 75-mm recoilless rifles, six bazookas, machine guns, and mortars. The task force was trucked 80 miles north on a dirt road to about three miles above Osan. There, Smith as overall commander selected a defensive blocking position on a ridgeline, which straddled the road at a right angle and was crowned by 300-foot-high hills. Any North Korean tanks and troops could be easily seen.

Task Force Smith’s disadvantages were in not having any reserves and of the vulnerability of being flanked on its sides and in the rear by larger enemy forces. At 7:30 a.m. on a cold, rainy July 5, 1950, appeared eight ominous-looking Soviet-made T-34/85 (the classic T-34 but with an 85-mm main turreted gun) medium tanks, part of an overwhelming North Korean force of 28 more T-34s followed by 5,000 confident North Korean infantry, that prior fought Imperial Japanese and Nationalist Chinese.

At 8:16 a.m., Task Force Smith’s five rearmost 105-mm howitzers opened fire on the tanks at a range of over 2,000 yards. Despite hits, the 105s’ shells bounced harmlessly off the steel monsters’ sloped armored sides, although their tank- riding infantry were casualties. A lone forward-deployed howitzer behind the dug-in U.S. infantry did damage two of the T-34s using HEAT (high explosive anti-tank) projectiles, of which only six were available.

A T-34 was set on fire, two of its crew emerging with their hands up, but a third one, firing a “burp gun” killed a .50-caliber machine gun assistant, who was the first U.S. serviceman to perish in Korea. Another T-34 took a track hit and was disabled. (U.S. Army 2.36-inch bazookas could not even penetrate at point-blank range the enemy tanks’ rear armor; a newer effective 3.5-inch, 10,000-feet per second “super bazooka”—ordered for Korea by MacArthur-was still in gradual production stateside.)

By 11:15 a.m., the remaining T-34s nonchalantly had driven through the center of the American position toward Osan. Brave Task Force Smith had already lost 20 men. Also, its extended field telephone communications were disrupted as the T-34s’ tracks cut ground wires. With his position bypassed and thousands of NKPA infantry bearing down. Smith grudgingly ordered a withdrawal at 2:30 p.m., saying, “This is a decision I’ll probably regret the rest of my days.”

Artillerymen removed breechblocks and sights from five 105s, making them inoperable, the forward 105 had been lost to enemy action. Smith’s men had received his fallback order to execute a leapfrog-style phased “bug-out” — Co. C, the medics, the H.Q., and last, Co. B. (One platoon was isolated and made its way back at night.) Presently, most of Task Force Smith’s casualties occurred, totaling to about 150 — namely, the dead — plus 25 in litters who had to be left behind. North Korean losses were 42 killed and 85 wounded.

MacArthur noted tiny Task Force Smith had feigned an “arrogant display of strength” to the enemy. Sagely, he observed however, that of all military operations, “a delaying action is the hardest to conduct.” (On July 7, 1950, President Harry Truman, with the concurrence of the U.N., appointed General MacArthur as the unanimous United Nations Commander in Korea.) Only one-sixth of Task Force Smith’s 19- to 20-year-old recruits and but one-third of its officers had World War II combat experience.

Thrust into what was to them an “incomprehensible land,” in which sometimes a G.l. had to barter away his own wristwatch in order to get accurate local geographic directions from a recalcitrant South Korean farmer, the men hardened and matured.

Although “G.l.” originally stood for “galvanized iron” (and later, for “government-issue”), the initial American G.l.s from Japan had become “flabby” while on their Japanese holiday. This was due to the soft life as occupation troops, who had sparse target practice and also might not know how to disassemble and clean an M-1 Rifle.

Blurted out a former occupation G.I. for many of his fellow counterparts: “1 just want to get back to Japan to my little ‘Sasebo Sadie’ [where] I have my meals cooked, my washing done, my socks mended, and my orders obeyed as if I was MacArthur himself.” “It all comes down to $37.00 per month [and] I never had [had] it so good.”

(As the new Japanese “Mikado,” in postwar Tokyo, the Commander in Chief Far East, General Douglas MacArthur, had set the exchange rate at 360 yen for every serviceman’s U.S. dollar. Postwar peace for America and Japan emanated from the “human bond” formed between the U.S. military occupiers and the Japanese people.)

Beneath the surface, the reportedly “bunch of Boy Scouts” who first had arrived in South Korea on a lark (indeed at the outset, MacArthur’s General Headquarters in Tokyo symbolically characterized the peninsular crisis across the Strait of Tsushima as just a “North Korean adventure”), soon learned to professionally adapt to survival there. Their lack of interest in an ideologically, “utterly useless war” on the remote, rustically mountainous peninsula of Korea would become counterbalanced by their comradely loyalty as “doggies” (in World War II, formerly known as “dogfaces”).

The 6 million American military personnel, who served in the Korean War during 1950-1953, would be reported as truly magnificent in their duty and performance. Vanquished at Osan was the U.S. military’s superiority complex mentality holdover from the panoramically victorious Second World War fewer than five years before.

In the leftover vacuum emerged the close cooperation of unit integrity wherein as one G.l. in Korea summarized to a Time magazine correspondent, “Morale’s fine, but what can morale do against tanks and planes?” MacArthur, who had not anticipated any American military involvement in a Korean civil conflict, had no plan for a quick counteroffensive. So far, he could only send in piecemeal, units such as T.F. Smith.

A commemorative ceremony is held at the Task Force Smith Memorial in honor of the men who fell near this spot on July 5, 1950. From left to right are Lieutenant Colonel Tilden Ried, Commander, 1st Battalion, 21 Infantry; Major General Alexander M. Weyand, Commander, 25th Infantry Division, and General Park Noh Young of the South Korean army.

G.I.s examine a damaged North Korean T-34/85 tank similar to the ones that attacked American forces near Osan on July 5, 1950.

How to make your smoke detector stop beeping