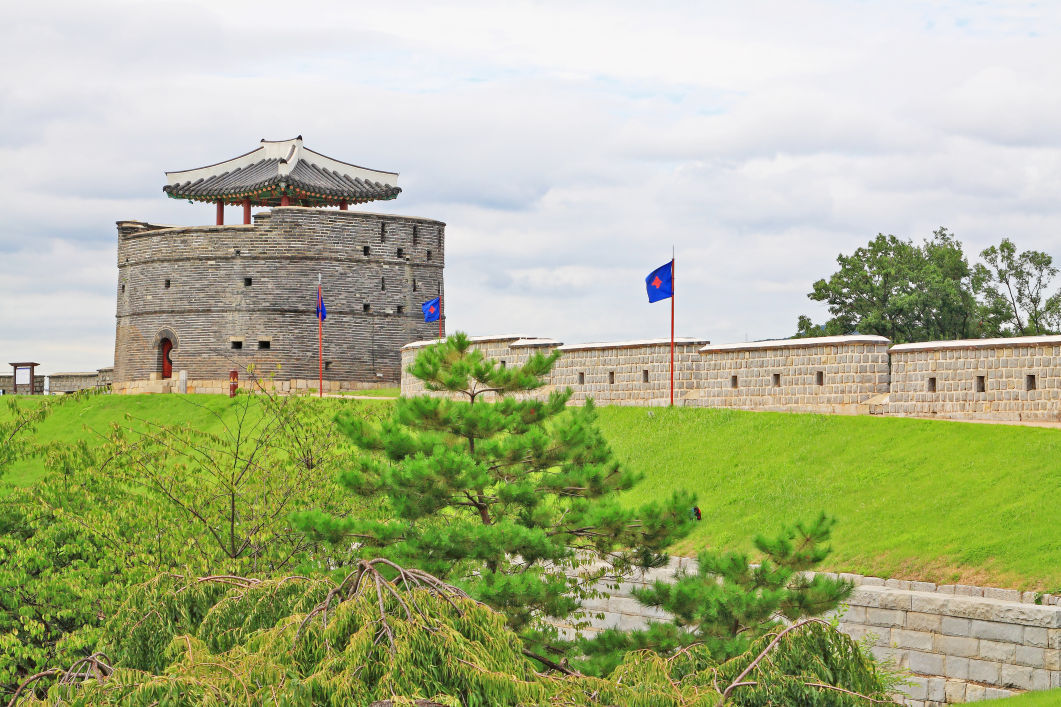 An example of Korea’s history of defensive works, the Hwaseong, or “Brilliant Castle,” built in the late 18th century, dominates a large swath of the South Korean city of Suwon. 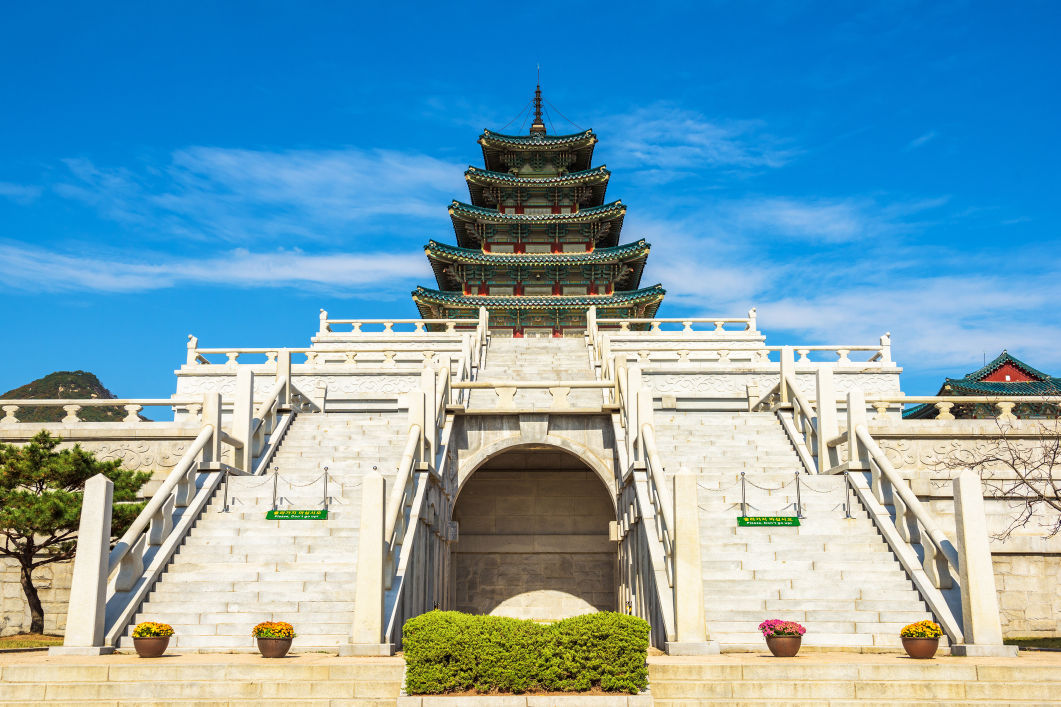 Gyeongbokgung Palace in Seoul was the home of the kings and government of the Joseon dynasty, which ruled Korea from 1392 until 1897. 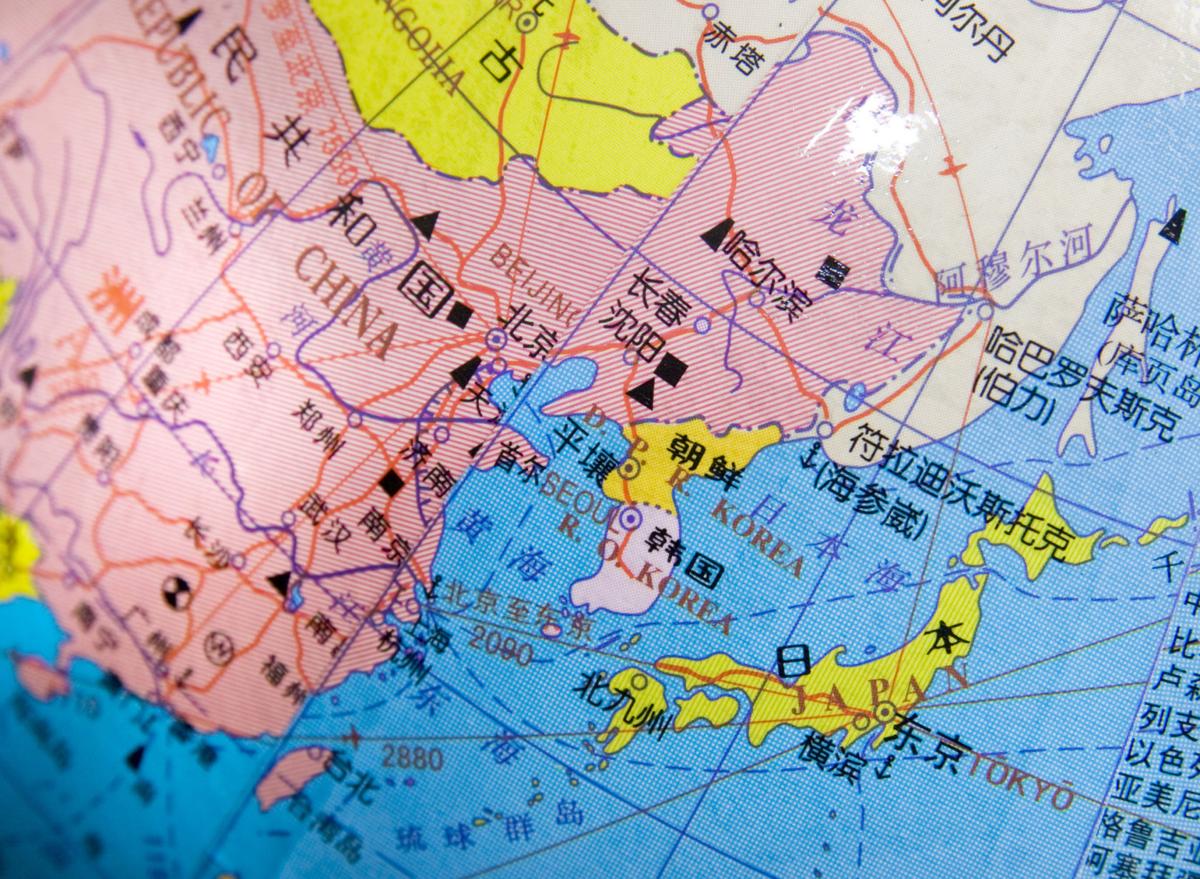 Korea, shown at center on a globe, lies at a strategic intersection of historic powers, including the Mongols, Chinese, Japanese and Russians.

Editor’s note: With North Korea in the news again lately, the author thought it timely to submit a pieced based on his recent research on Korean history. He is planning to deliver his findings at the Oakmont Village recreation center in Santa Rosa on April 17 at 10:30 a.m.

An old Korean proverb states that in comparison with the larger world, Korea is “a shrimp among whales.” Historically, such is the case for the moderate-size 600- mile-long, 175-mile-wide geographically still quasi-isolated Korean peninsula.

In about 8,000 BCE, early nomadic hunter-gatherers from Siberia penetrated the ruggedly mountainous Korean appendage. By 800 BCE, rice cultivation began in Korea, which in 700 CE became intensively grown on the wet terraced paddies of Korea’s precipitously steep mountainsides and upon its open, level western littoral.

Vying internal kingdoms were unified under the state of Great Silla between 676 CE and 935 CE, comprising approximately two-thirds of the peninsula of Korea. Double-crop planting of rice seedlings in flooded paddies increased its staple yield, increasing the dense but not overcrowded population of pre-modern Korea. In 1400 CE, Korea’s endemic population reached more than 4 million; in 1600, 10 million; in 1732 (the year of George Washington’s birth), 13 million; and, in 1750, 18 million Koreans inhabited their “pando,” or “half-island,” in “splendid isolation” from the rest of the planet.

Few famines visited Korea, which wisely learned to fall back on the coarse grains of barley, millet, and wheat during a lean rice production. Bordered by the Yellow Sea, the Strait of Tsushima, and the Sea of Japan on three sides, and, in the north, by the Yalu and Tumen Rivers — the latter barrier accented in the northeast by thick forestland-Korea has remained isolated for most of its long history.

The unified peninsula was called Goryeo (or Koryo) from 936-1388 CE. The state of Choson, meaning, “Land of the Morning Calm,” next existed from 1392-1904. Proud of its self-sustaining ability, choson eschewed all outside contact. Not invulnerable to foreign intervention however, the “shrimp” of Korea occasionally was invaded and overrun by some of the neighboring barbarian “whales” in the forms of the Mongols (1231-1356), the Japanese (1592-1598), and the Manchus (1627-1637).

The aftermath of the last invasion made China a suzerain of Korea, although Korean culture stayed intrinsically intact, independent, and unified. (Korea was not a political nation-state within the Western concept.) Of the 700 Korean tributary missions to Qing China from 1644-1894, actual formal communication was not spoken, but tactfully limited to the writing of the Classical Chinese characters of that diplomatic language of East Asia, which were written on paper using brushes and ink.

This kind of non-verbal parley was called “brush talk,” and it was symptomatic of Korea’s rarefied diplomacy even with venerable China.

Korea’s inimical alphabet of Hangul in its written version is from the unique Altaic language family, which has no roots in any other language groups. The various “byproducts” of Korea’s feudalistic rice farming civilization, were kimchi or pickled cabbage, the world’s first naval armored or “turtle ships,” and the abolition of hereditary slavery in 1886, and of all formerly prevalent forms of it by about 1894.

On the other hand, the “Paechong,” or outcastes in the Korean caste-structured culture included innkeepers, ferrymen, prostitutes, entertainers, leather workers, and butchers, all of who were frowned upon by the “Yangban,” or upper class civil service elite in Korea’s government. A rigid class structure was the central theme of a Confucian worldview of a stable society, which was an influence, derived from China’s 350-year religious “tutelage” of its protégé, a previously Buddhist Korea.

Meanwhile, major Korean irrigation projects flourished, such as dikes and polders, as more suitably precious land was ever more “brought under paddy.” Water wheels directed stream flow that was fed by upland mountain reservoirs, allowing for the quintessential flooding of the rich paddies, fertilized by human solid waste.

Foreign isolation deemed the “true way” of isolationist Choson became the paradigm. It discouraged shipbuilding, navigation, and commercial trade. Thus Korea was unnoted on the international trade routes of the great maritime powers. In the late 18th century, western contact with Korea in the form of wandering French Catholic missionaries occurred. At least a few thousand Koreans were soon converted, but the Catholic Persecution of the 18th and 19th centuries witnessed for example, Korea’s execution of nine French priests and their indigenous proselytized.

Hastening to the rescue of the ship and its crew were local Korean officials who allowed for the safety of the vessel, which departed Korea peacefully. In July 1866, the armed U.S. merchant vessel General Sherman boldly sailed up the high tide of the Taedong River to the old Korean capital city of Pyongyang to force trade.

Enraged Korean soldiers and civilians seized and killed the General Sherman’s mixed American, Chinese, and Malaysian 20-man crew and burned their ship into a charred hulk. Seven Koreans also were killed during the “General Sherman Incident.” Resultant punitive naval expeditions mounted by the United States were repelled by sea storms as well as by the stormy, xenophobic Korean people who fiercely defended their native shores from aggressive unprovoked foreign barbarians.

Korean government-erected “Taewongun” or stone stele sternly admonished to all, “Western barbarians invade our land; if we do not fight, we must appease them; to urge appeasement is to betray the nation.” When in the late 19th century, an American missionary visited an unfriendly and very clannish Korea he became so impressed by Korea’s pristinely homogenous culture; as well as, by its powerfully inherent insularity, that in his diary he referred to the highly isolated country as the “hermit kingdom.”

Korea’s name, Choson, was gradually less often used by foreigners. More frequently preferred, as the popular appellation for the 1,000- year-old homeland was Goryeo or Koryo, which meant the “Walled Fortress,” eventually leading to the contemporary Western-used equivalent name of Korea.

However, in 1876, under intense coercion due to Westernized Japan’s gunboat diplomacy, Korea reluctantly had to open up to coastal trade restricted to a walled enclave in Pusan port. The Land of the Morning Calm kowtowed to the Rising Sun.

In August 1945, at the close of World War II in the Pacific, the “shrimp” of Korea’s back was broken into two halves by the greatest “whale,” the United States. North and South Korea were, therefore, artificially born on the cusp of the Cold War world. Over the next seven decades, South Korea has morphed into a Westernized capitalist commercial power.

North Korea has continued to steadfastly adhere to its archaic cultural prime directive of maintaining itself as a latent Hermit Nation in the midst of a new cosmopolitan planetary community from which it staunchly remains apart.

John Stephen Futini is a history enthusiast who lives in Napa.

An example of Korea’s history of defensive works, the Hwaseong, or “Brilliant Castle,” built in the late 18th century, dominates a large swath of the South Korean city of Suwon.

Gyeongbokgung Palace in Seoul was the home of the kings and government of the Joseon dynasty, which ruled Korea from 1392 until 1897.

Korea, shown at center on a globe, lies at a strategic intersection of historic powers, including the Mongols, Chinese, Japanese and Russians.