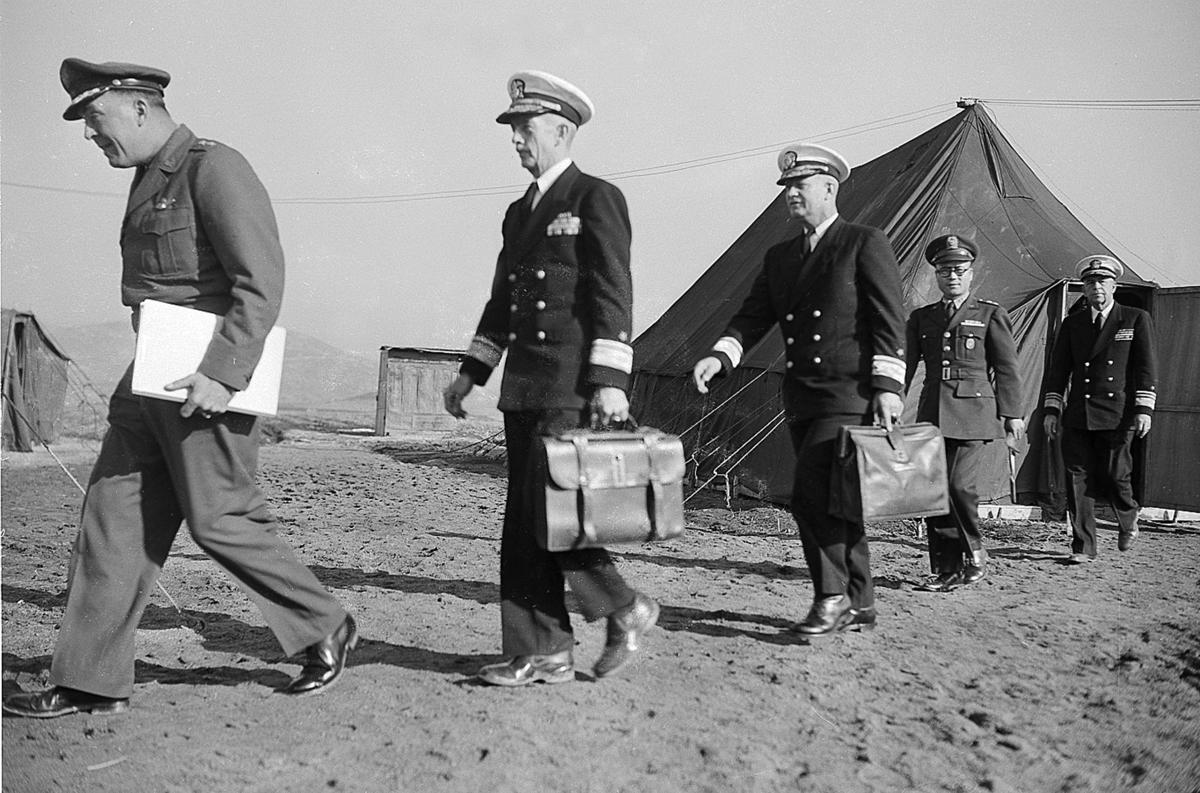 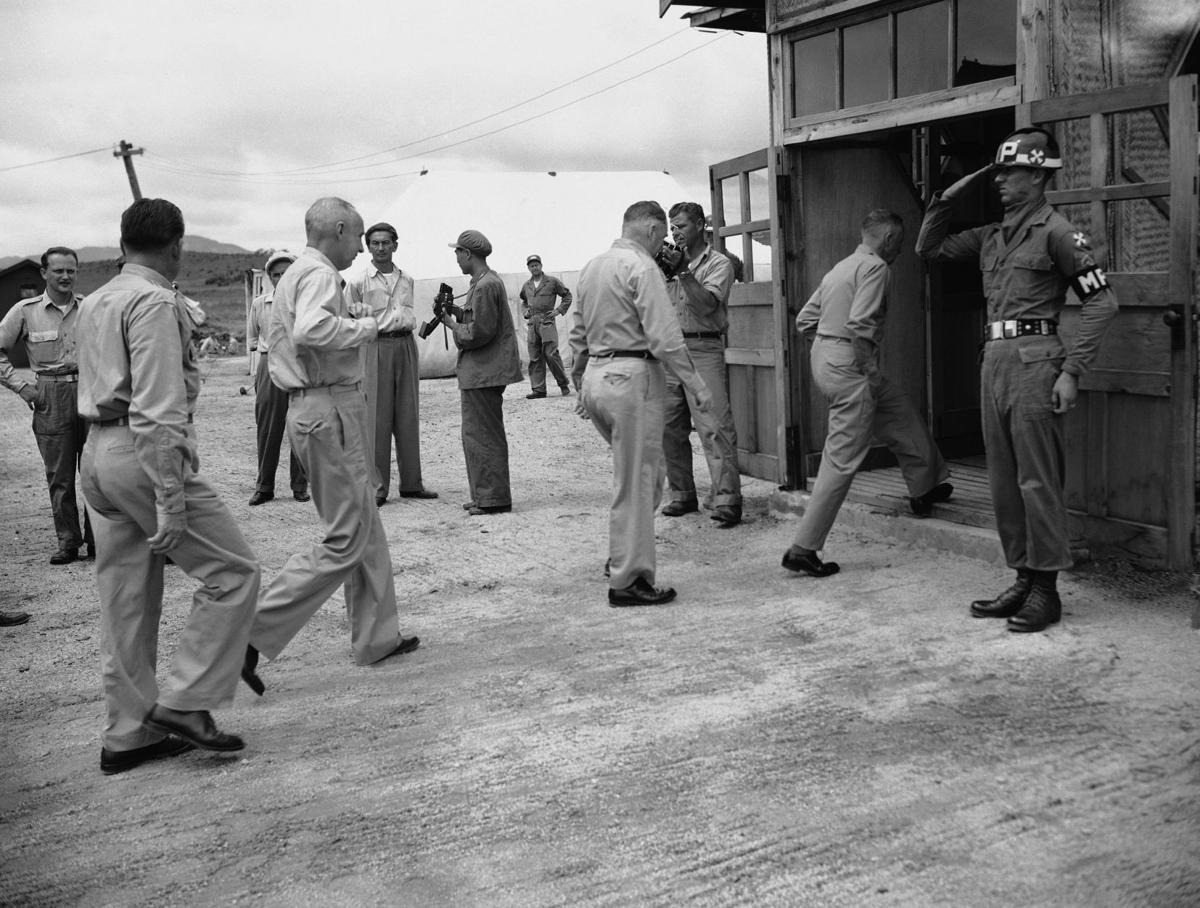 The United Nations truce delegates file into the weathered conference hut at Panmunjom on July 14, 1953 for another effort at the peace table to find a final solution to the Korean War. Leading the delegates into the meeting room is Lt. Gen. William K. Harrison, chief of the U.N. truce team. 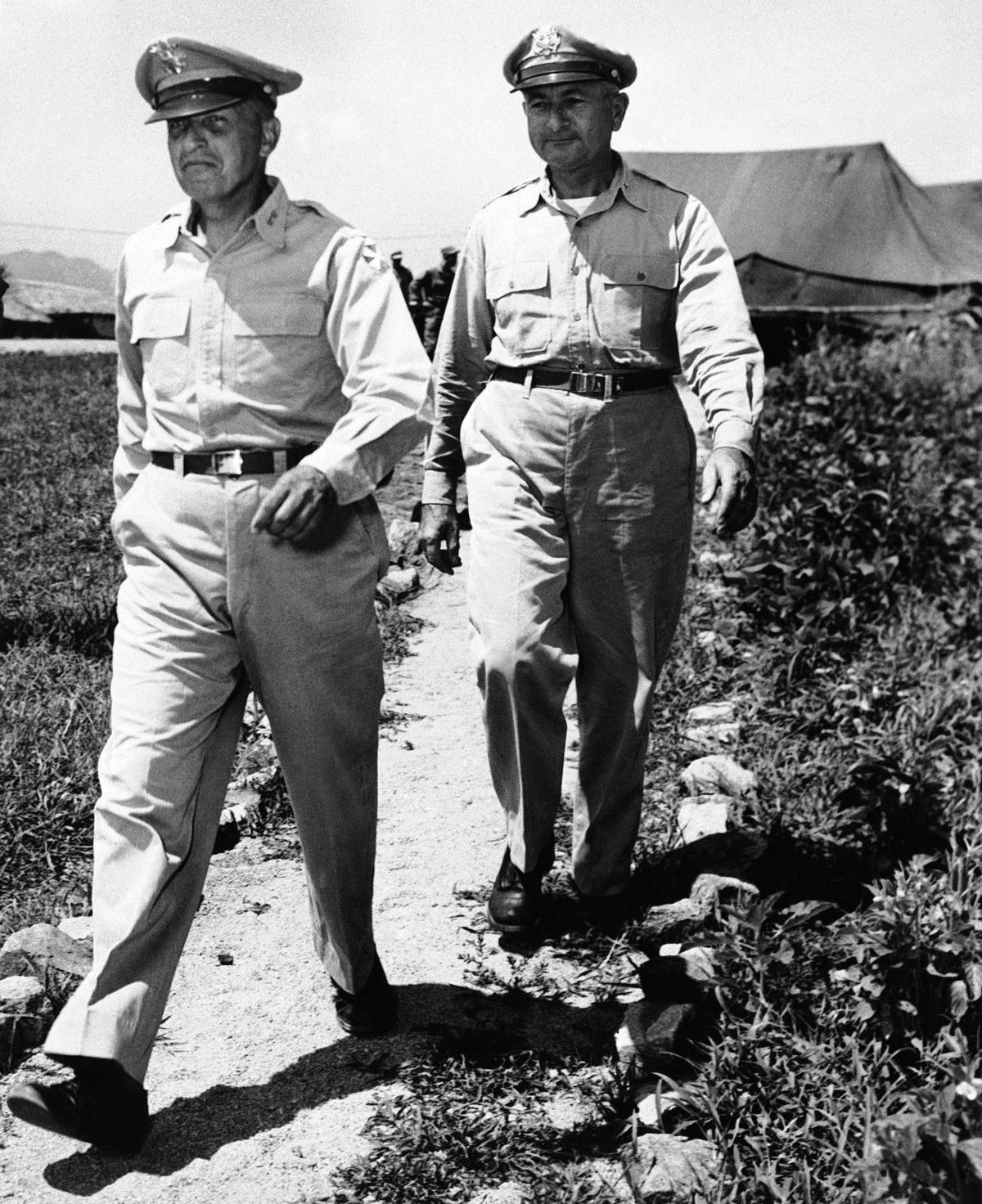 Stern-faced Maj. Gen. William K. Harrison, U.S.A, Chief U.N. delegate to the peace talks at Panmunjom on August 15, 1952, stalks towards his helicopter after another fruitless day of negotiations with the communists. Said General Harrison when he requested the recess, “If they wouldn’t have agreed to the recess they know we would have walked out on them again.” The next scheduled meeting is for on Tuesday, Aug. 19. With him is Brig. Gen. John P. McConnell, U.S.A.

The United Nations truce delegates file into the weathered conference hut at Panmunjom on July 14, 1953 for another effort at the peace table to find a final solution to the Korean War. Leading the delegates into the meeting room is Lt. Gen. William K. Harrison, chief of the U.N. truce team.

Stern-faced Maj. Gen. William K. Harrison, U.S.A, Chief U.N. delegate to the peace talks at Panmunjom on August 15, 1952, stalks towards his helicopter after another fruitless day of negotiations with the communists. Said General Harrison when he requested the recess, “If they wouldn’t have agreed to the recess they know we would have walked out on them again.” The next scheduled meeting is for on Tuesday, Aug. 19. With him is Brig. Gen. John P. McConnell, U.S.A.

On June 23, 1951, 66 years ago during the Korean War, a proposal for peace talks was made publicly on the radio by Soviet ambassador to the United Nations, Jacob Malik.

Malik’s proposal called for “a cease-fire and armistice, providing [there was] a mutual withdrawal from the 38th Parallel.” Thus set forth was the concept that war could be controlled by diplomacy, rather than vice-versa, as in the past.

Walking the tightrope of international relations, Malik was skirting communism’s war ideal that “until the last drop of North Korean and Chinese blood had been drained, there could be no peace in Korea.” Stalin’s hardline policy, that the Korean War was a fight between Communism and the “Anglo-Americans,” would be tested.

So was President Harry Truman’s assertion that the Korean Conflict was to prevent Communist worldwide expansion. For, in the capitalist camp, the United States did not formally recognize North Korea or the People’s Republic of China as sovereign nations. (Instead, the U.S. recognized exiled Chinese Nationalist Chiang Kai Shek’s Republic of China on offshore Taiwan island as the one “true China.” U.N. members Britain and Canada still recognized mainland China).

U.N. commander Lt. Gen. Matthew B. Ridgway’s polyglot 8th Army had vigorously recovered lost ground back to the original 38th Parallel demarcating the two Koreas since August 1945. By the spring of 1951, a militarily static trench and tunnel warfare replaced the earlier seesaw mobile phase of the Korean War.

Although the opposing “Big Brothers” — the United States versus mainland China — now dominated the stalemated land fighting, at its inner core, Korea was a civil war between the North and South.

In North Korea, bereft of his predicted conquest of South Korea, a flummoxed Kim Il Sung acceded to the Russian solicitation for a truce conference. However, South Korea’s obdurate Syngman Rhee was bent upon the quest for a total victory, by reuniting the entire peninsula of Korea under his rule.

General Ridgway entertained the idea of holding peace discussions on board a neutral Danish hospital ship in Wonsan Harbor, but the Chinese and North Koreans had already set up a meeting site at Kaesong, a former medieval capital from 935 to 1392. Agreed upon by both sides on July 2, 1951, Kaesong was about 9 miles behind the still-embattled MLR (Main Line of Resistance) in Communist territory.

Truce negotiations were begun at Kaesong on July 10, 1951. Inside the truce house, U.S. Admiral C. Turner Joy and ROK General Paik Sun Yup faced off with North Korea’s General Nam Il and Chinese General Xie Fang. By August 22, 1951, the negotiators concurred in the establishment of a militarily defined truce line within a wider DMZ [demilitarized zone) buffer rather close to the 38th Parallel.

The intrusion of a Chinese infantry company marching through the conference area on August 4, as well as an alleged U.N. aerial bombing and strafing attack, (coincidentally, on August 22), made on Kaesong, which was also an active Communist supply base, brought about a change of venue for the continuing peace talks.

A long recess interrupted the talks, which did not resume until Oct. 25, 1951, and only then by the mutual Panmunjom Security Agreement of Oct. 22, which established an inviolable 1,000-yard radius around the (still standing) building in which the negotiations continued until July 27, 1953.

“Negotiating while fighting” was an oxymoron that applied to the rest of the Korean War. The United States and China jockeyed for improved positions by fighting over insignificant hills and ridges. Capturing a terrain feature from the enemy was considered a coup, which gave each side a better negotiating position.

Prisoner of war exchange was the major sticking point of the long-deadlocked negotiations. The Communists wanted an “all-for-all” exchange of POWs, while the U.S./U.N. coalition was for an individual exchange, based upon the preference of each POW. Stalin felt that any non-repatriated Communist POWs would become spies for the West. To have an individual exchange would be a U.N. moral victory.

Out of 183,000 Communist POWs, 83,000 did not want to return to their home countries, according to an initial screening in April 1952. Of these, over 5,000 were Chinese, the bulk, 78,000, were North Korean. Many Chinese “volunteer” soldiers were impressed Nationalists. This held true for South Korean military and civilian POWs, forced to join the advancing North Korean Army in 1950.

Despite a 1949 Geneva agreement that established forced POW exchanges, it was feared that thousands of prisoners, upon return to their Communist homelands, might be mass executed.

In the year 1953, several developments began to favorably influence the peace process. The War’s unpopularity in the U.S. and Truman’s decision, based on nearly eight years as president, combined to bring in popular Ike Eisenhower, who promised an end to the Korean War. (Fire from the rear, in the form of both McCarthyism and the Republicans, made it difficult for Truman to make peace in Korea.)

In the People’s Republic of China, inadequate worker housing and a stagnation of industrial output weakened resolve to continue giving lives and wealth to fighting in Korea, while its stronger ally, Russia, did not have any Soviet boots on the ground there. The Soviet Empire suffered East German unrest in 1953; Europe was its main focus, not Korea.

By 1953, the U.S. and the U.N. could no longer send substantial reinforcements; in the U.S., only the 82nd Airborne Division remained. Ironically, it was General Matt Ridgway’s old unit, which he had jumped with over Normandy on June 6, 1944.

But the most momentous news came from Moscow on March 5, 1953: Joseph Stalin died in his apartment due to a stroke. Georgi Malenkov, the new Soviet premier, was inclined to accept a truce armistice in Korea. The “status quo ante” could now be restored to the still divided Korean peninsula (“bellum” was omitted from the usual phrase since the U.S. considered Korea a Police Action or a “Conflict,” not a war).

To a spiteful Syngman Rhee, the unfulfilling prospect of a tenuously separated Korea was anathema. Rhee unilaterally freed some 27,000 North Korean POWs in his charge into the South Korean populace, only 971 of whom were recaptured by U.N. authorities, which now permanently took control of all the Communist POWs.

Finally, on July 27, 1953, after 575 truce meetings, a cease-fire armistice was signed at 10 p.m. by both sides at Panmunjom, a delay during which the U.S. lost nearly half of its 33,667 battle deaths. Unforced individual POW repatriation was a substitute for victory.

Futini is a Napa-based history enthusiast.

Week in review: Top photos of the week from AP