Become a Member
Read Today's E-edition
Share This
The Great War: The Americans arrive "Over There"
Share this
1 of 3 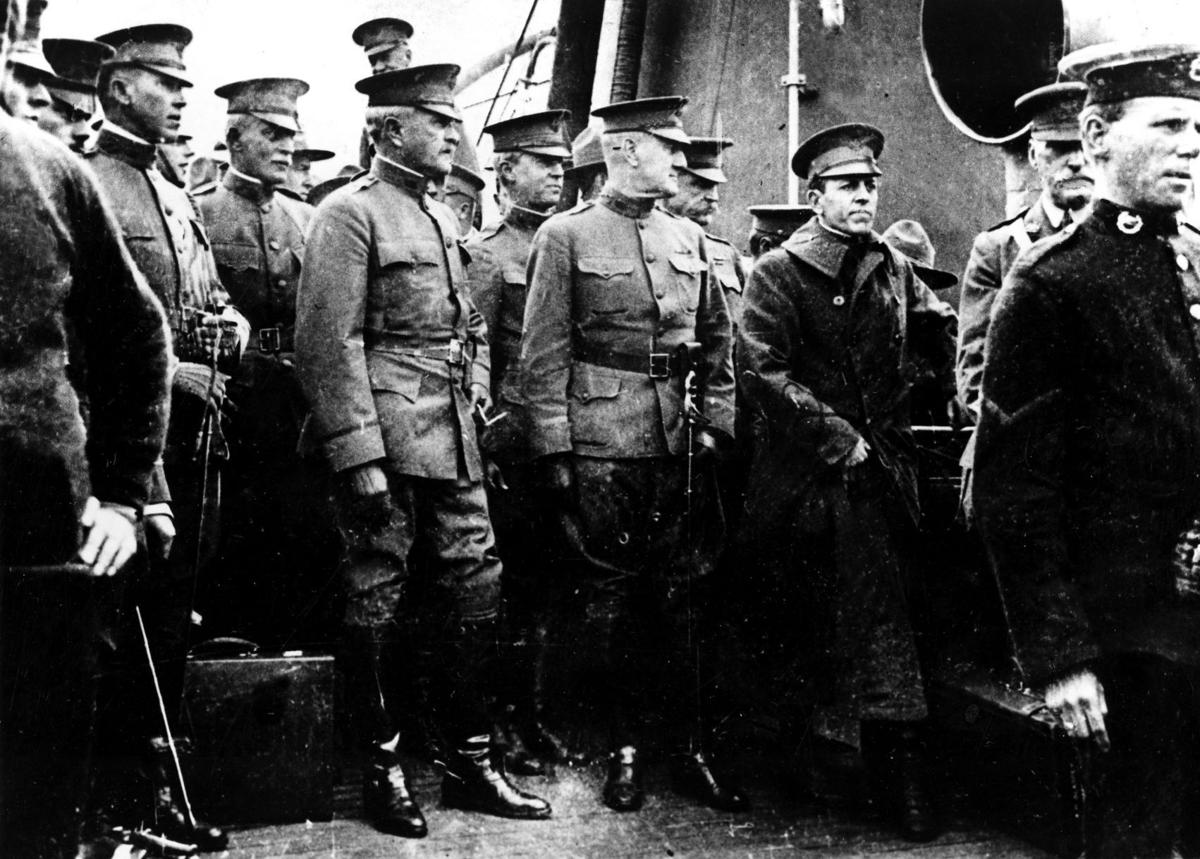 U.S. Gen. John J. Pershing and his staff arrive at Boulogne, France, during World War I.

In this June 1917 file photo, the first troops of the American Expeditionary Force land at the French port of St. Nazaire, France. (AP Photo, File) 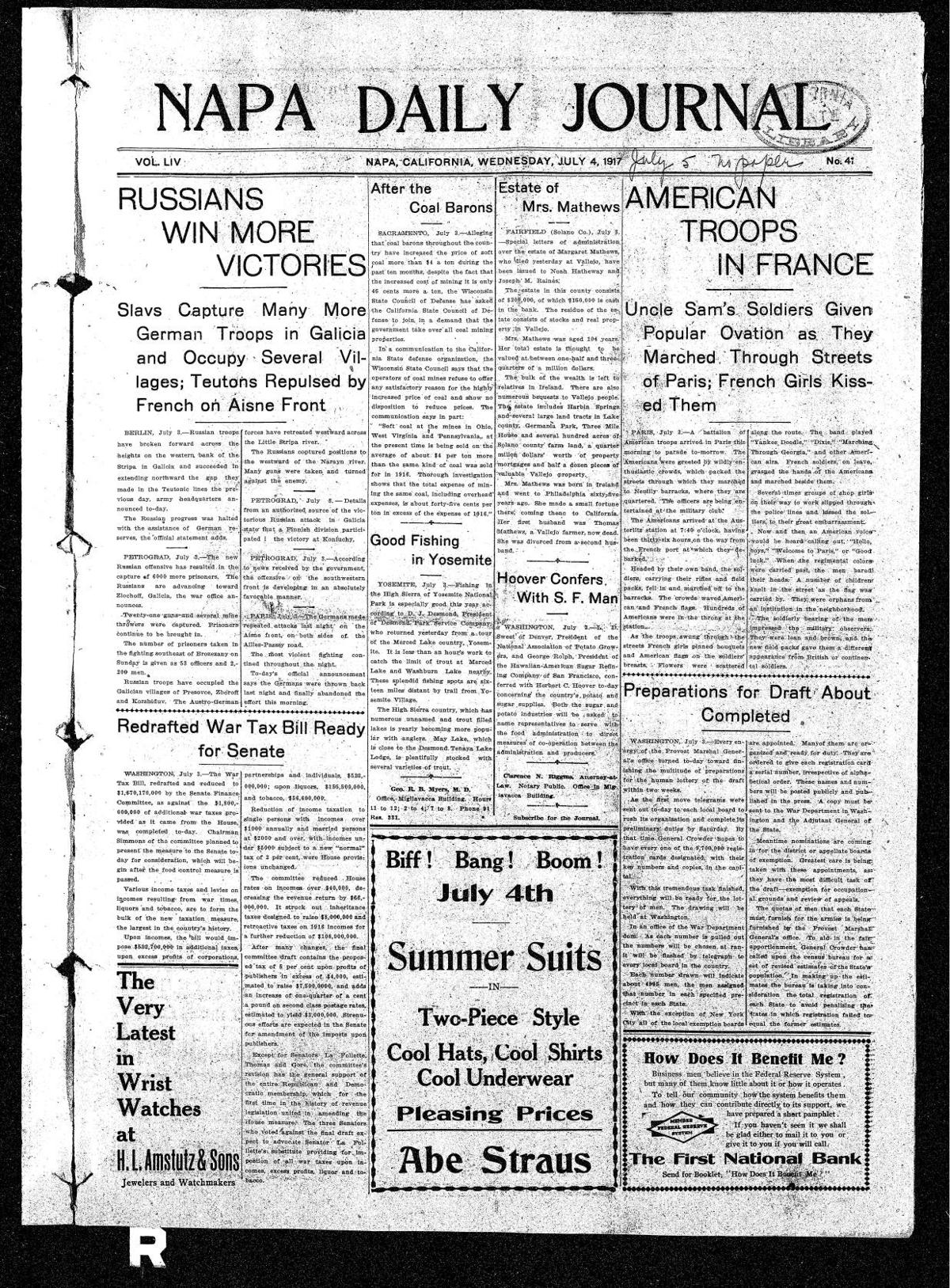 The July 4, 1917 edition of the Napa Daily Journal notes the rapturous reception enjoyed by American troops on parade in Paris.

Editor’s note: This is part of an occasional series marking the anniversary of America’s entry into World War I.

Ironically, Paris had not experienced such a major celebration since August 1914, when a grandly deluded Europe marched off toward a continental conflagration.

The first 16,220 Doughboys, the trickling vanguard of a two-million-man American army, had arrived to succor a stricken France and Britain. Young, vigorous, husky, self-confident, the Americans injected renewed spirit and energy into a stalemated quagmire.

On parade was a battalion of the 16th Infantry Regiment, First Division, the “Big, Bloody, Red One.” (As many as 15,000 Doughboys would soon land daily at the port of St. Nazaire alone.) The New World had arrived just in time to save the Old World.

The word “Doughboys” originated possibly in the arid American Southwest where in the pecking order of marching; the foot slogging infantry followed the limbered horse artillery, itself behind the cavalry in the lead. Eating powdery dust that hooves churned up, the infantry became caked in it; hence, their nickname Doughboys.

General John J. “Blackjack” Pershing was selected to command the American Expeditionary Forces in France, because of his military experience on the western frontier (1886-90), in Cuba (1898), the Philippines (1899-1903), and northern Mexico (1916).

“Blackjack” was a derisive nickname assigned to a stern Pershing—who had led the Buffalo Soldiers, comprising the rank and file of the 10th Cavalry Regiment — when he taught at West Point, the cadets finding him to be pedantic. However, the epithet evolved into one which symbolized courage, honor, and resolution. (Pershing did not seek an office; he made an ideal choice for C-in-C.)

June 16, 1917 marked the first meeting of the two iron captains of war, General Pershing and Marshal Ferdinand Foch, Allied Supreme commander on the stymied Western Front. Whereas President Woodrow Wilson had directed Pershing to lead a separate, self-contained all-American army in France, Foch desired that Pershing’s Doughboys simply be used as piecemeal fillers in the French and British armies, a plan which Pershing steadfastly opposed.

American amalgamation versus independence became a chronic controversy, with Foch threatening to fall back below the Loire River, giving up Paris to the Germans. Pershing countered that Foch could go right ahead; the U.S. Doughboy army in France would firmly stay as a distinctly separate entity.

“We are at war, but not in it,” quipped Americans at home, who witnessed their country’s declaration on the 975th day of the 1,601-day conflict, yet had thus far sent very few Yanks “Over There.”

The middle of 1917 was a crisis phase in the Great War. Termed “collective indiscipline,” the French infantry poilus (“hairy ones”) rebelled after the failure of their Nivelle spring offensive. The battle of Passchendaele was a massive squandering of British troops in which the “Tommies” could not break the deadlock after three years of stalemate.

Russia’s Red October saw a communist revolution unseat the shaky Kerensky democracy in November in the wake of its failed Kerensky Offensive on the Eastern Front in July. Russia became neutral via the Treaty of Brest-Litovsk, (March 1918), allowing 40-plus German divisions to go to France.

“I hope it is not too late,” worried despondent Marshal Henri Petain — the hero of Verdun in 1916 — to Pershing, as an exhausted Entente anticipated the arrival of America’s full “balance of power.” It was now a race between America and Germany as to which nation would ultimately deliver a timely decisive blow on the Western Front.

On May 10, 1917, the first U.S. troopship convoy had successfully set sail “across the pond” escorted by American navy destroyers (a U.S. navy concept). Not a single Doughboy troopship en route to Europe would be torpedoed by U-boats as a result.

By Dec. 31, 1917, 183,899 Doughboys—over one-half in British ships —- had landed in French and British ports. (Two million Doughboys eventually served Over There by the time of the Armistice in November 1918.) Allied sea power made possible the much-needed fresh American manpower to save France and also turn the tide of a German advance back to the west bank of the Rhine River by fall 1918.

Petain’s aide, Jean de Pierrefeu, reflected, the newcomer Doughboys were “almost all bareheaded and bare-chested, singing American airs at the top of their voices. The spectacle of these magnificent youths from overseas, of 20, radiating strength and health, contrasted sharply with our own regiments in their faded uniforms, wasted by many years of war, their sunken eyes, held by a will to heroism and sacrifice. [New] life was coming in floods to re-animate the dying body of France.”

“Vive I’Amerique!” rang out upon the parade of the battalion of the 16th Doughboy regiment, as Blackjack Pershing rode through the frantic overjoyed civilian throngs, his hand at an unwavering salute.

However, the Yanks were sans helmets, cannons, machine guns, airplanes, and tanks. Apart from the manufacture of artillery and rifle ammunition, America was consumed in the production of “pleasure cars,” that enhanced domestic mobility. (Model T Fords served as field ambulances in Europe.)

Perhaps they seemed “a company of casuals,” to the French and British senior generals and politicians. The Doughboys entering on the continent and they maybe seemed as second- rate, irreverent amateurs compared to the trained professional European armies.

Comprised of “miners, teachers, clerks, college graduates, laborers, pharmacists, electricians,” and many other backgrounds, the ebullient Doughboys possessed an “intense independent passion and courage,” and rapidly metamorphosed into “first- rate troops.” (Albeit, the Doughboys were largely equipped with French or British weapons, as American manufacture lagged about a year or more behind schedule.)

Pershing’s visit to the tomb of Marie-Joseph Gilbert du Motier, the Marquis de Lafayette, located at the Picpus Cemetery adjacent to Notre Dame (“Our Lady of Peace”) Cathedral was the epilogue to the debut parade of the Doughboys’ vanguard in Paris on July 4, 1917. Present also was U.S. Army quartermaster Colonel Charles E. Stanton, who read from an apparently scripted document, stating, “Lafayette, we are here!”

A piqued Pershing felt the phrase to be an embellishment, and shunned it. (Indeed, American troops were not sent to France’s rescue during the French Revolution of 1789, the Revolutions of 1848, or the Franco-Prussian War of 1870, despite the debt the Americans owed to France dating from their own Revolution.)

Nevertheless, the Franco-American cycle of relief had come full circle. The advent of the impetuously brash Doughboys helped to insure that both America and France would each continue to celebrate their July birthdays of the Fourth and Fourteenth.

Futini is a Napa-based history enthusiast.

A sermon of peace

This week of July 4th,  marking American Independence, we look around and it feels as if our culture, our political processes, our country, ou…

Philippines war made Pershing a master of counter-insurgency

The long war between American forces and Moro rebels in the Philippines made the soon-to-be-legendary Gen. John J. Pershing an accomplished ma…

The Great War: Americans join the battle in the skies

A hundred years ago, warfare took on three dimensions in World War 1. Beneath the waves—submarines, and over the trenches "aeroplanes," so made it dynamic.

U.S. Gen. John J. Pershing and his staff arrive at Boulogne, France, during World War I.

In this June 1917 file photo, the first troops of the American Expeditionary Force land at the French port of St. Nazaire, France. (AP Photo, File)

The July 4, 1917 edition of the Napa Daily Journal notes the rapturous reception enjoyed by American troops on parade in Paris.

It’s OK to sit out Black Friday this year