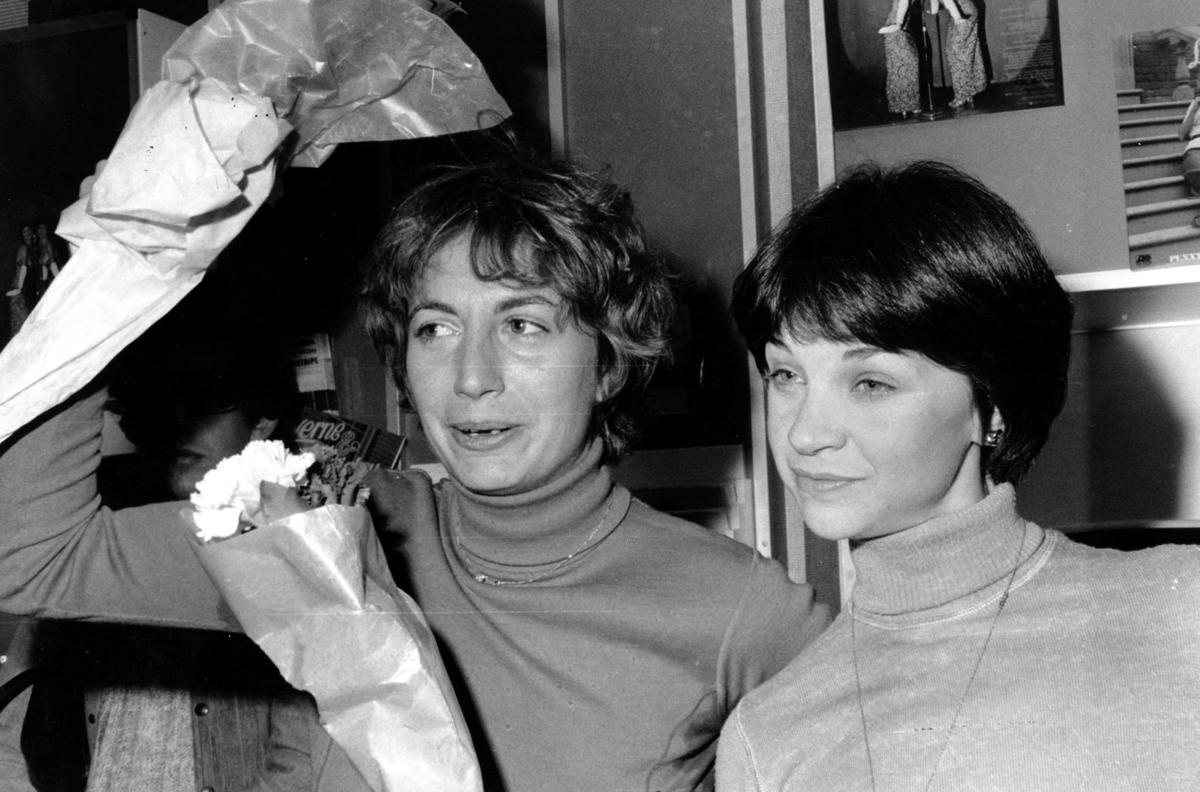 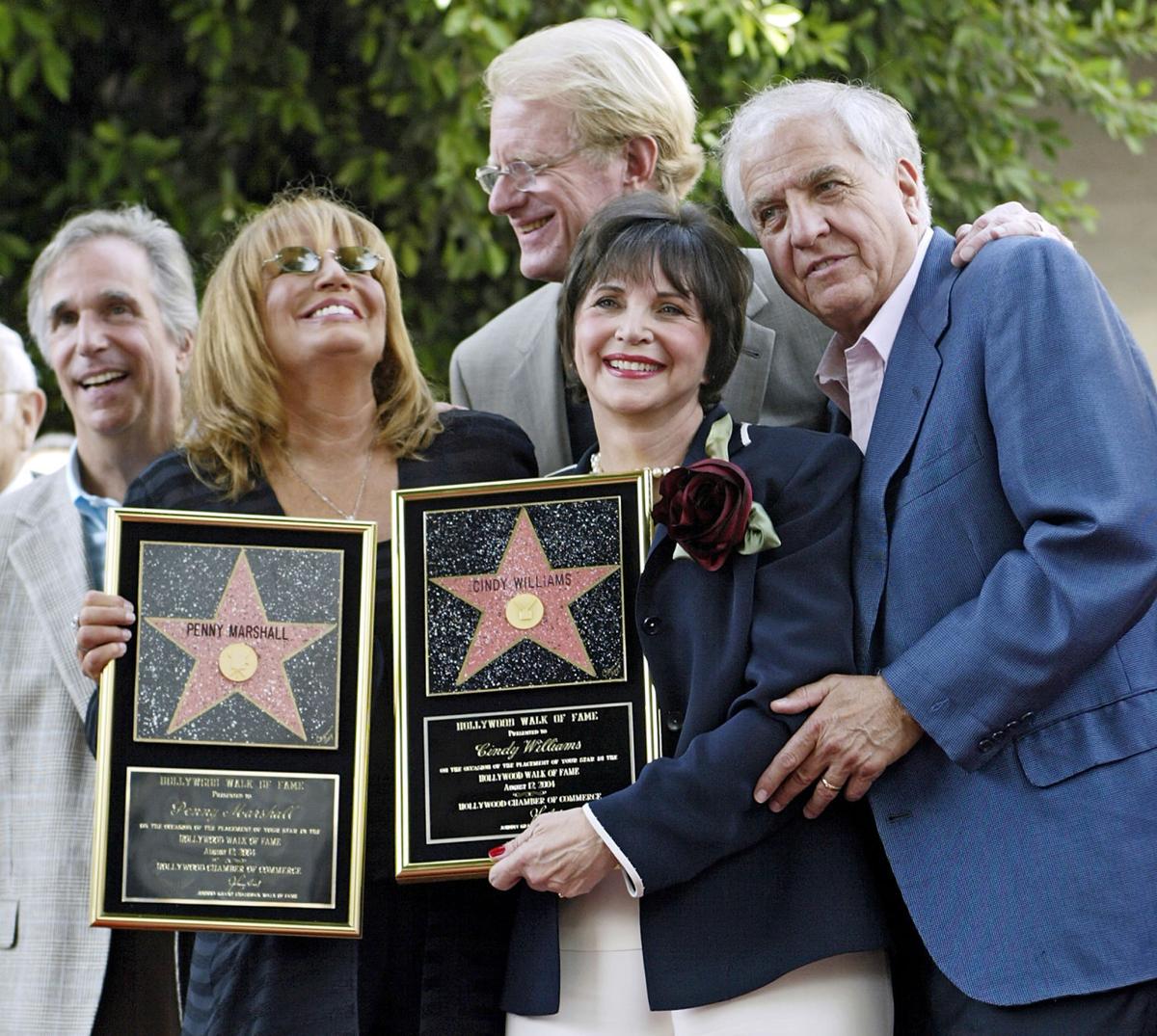 Whenever friends visited executive producer Garry Marshall at Paramount studio, he’d always refer them to go watch the taping on the “Happy Days” set. He never suggested for anyone to step foot on the spin-off show “Laverne & Shirley” set during its taping, because the two lead actresses, Penny Marshall and Cindy Williams, were usually at each other’s throats.

Trouble began before the sitcom was even conceived. Penny Marshall and Cindy Williams worked together writing sketches on a bicentennial comedy special “My Country ‘Tis of Thee.” During this time period, both television actresses were asked by Garry Marshall to appear on an episode of “Happy Days” as Laverne Defazio and Shirley Feeney, friends of the Fonz (Henry Winkler). Shirley was to be set up with Fonzie’s best friend Richie Cunningham (Ron Howard.) The two working-class girls’ characters were a hit with the TV viewing audience.

Their successful TV appearance on the 1970s sitcom started a big discussion at the Paramount Studio about making a future sitcom about the working-class girls for the ABC network. Meanwhile, Penny Marshall and Cindy Williams were busy writing bicentennial sketches for the 1976 special. Then, Penny dropped Cindy as her writing partner and went with someone else. Cindy was crushed and wasn’t given any explanation for the change.

When the TV character role of Shirley Feeney was offered to Cindy Williams, she was hesitant to give an answer and wanted reassurance from Penny Marshall. She telephoned Penny several times, but the other actress wouldn’t return her phone calls. It was unclear why Cindy Williams needed the other woman’s approval. She’d already appeared in four successful films and one movie of the week, “The Migrants.”

Her first movie, “Gas-s-s : Or It Became Necessary To Destroy the World In Order To Save It,” was with B-horror movie director Roger Corman. She played a pregnant white woman having a black man’s baby. Afterwards, she appeared in George Cukor’s “Travels With My Aunt.” Then, she was cast opposite Ron Howard in “American Graffiti.” Finally, she was also in Francis Ford Coppola’s political thriller “The Conversation” with Gene Hackman. Penny Marshall’s acting credits were a recurring role in “The Odd Couple” and a guest spot on “The Mary Tyler Moore Show.” Penny wasn’t as accomplished an actress as Cindy.

Then, one day, Penny Marshall came into the studio office, where Cindy Williams was typing up one of the comedy sketches for the bicentennial special. She wanted to know if Cindy was going to do the new show. However, Cindy told her coldly that she was busy working on the “Sutter’s Mills” sketch and couldn’t give her a definite answer.

“Don’t take too long thinking,” stated Penny. “They are looking at different people for the role of Shirley Feeney.” With that said, Garry Marshall’s sister left the room. After that encounter with her future co-star, Cindy Williams called her agent and confirmed that she wanted the part.

During the first season, Penny was given all the physical comedy bit routines. Cindy felt left out. She reminded the TV writers and producers in the “Happy Days” episode were she appeared that she actually did do physical comedy when she accidentally decked Ron Howard’s clean-cut 1950s character Richie in the Cunningham living room.

Her pleas for more physical comedy bits in future episodes went unheard by the staff. Then, one day, Garry Marshall came on the “Laverne & Shirley” set and told the eager actress that he was writing a physical bit for her. She was willing and ready for the new challenge. You may remember the episode, where Laverne gets her mouth stuck in suction part of the vacuum cleaner and Shirley tries desperately to pry it off of her in vain.

Another problem came with Cindy doing an accent. Since Penny was doing a Brooklyn accent, Cindy tried for a New York accent but it didn’t work for her at all. She was unhappy with it. Finally, Garry Marshall and the dark-haired actress discussed the difficulty with the accent. They both agreed for her to drop the accent altogether.

Last year marked the 50th anniversary of the sci-fi series. During it original three-year run from 1966-1969, Star Trek didn’t bring in big ratings.

You may be surprised to learn that William Shatner wasn’t the original choice for the captain of the Starship Enterprise. It was Jeffery Hunte…

This 1966 comic book action television show took The Munsters and The Addams Family off the air. The ghoulish black-and- white sitcoms of the …

On April 30, 1954, KABC-TV premiered, Dig Me Later, Vampira, at 11 p.m. Maila Nurmi debuted as the ghoulish horror movie hostess Vampira. In a…

On June 27, 1966, the Gothic soap opera “Dark Shadows” made the afternoon airwaves of ABC television. It was a replacement program for teen so…

Originally, the action western show was called The Wild West. Before finishing the filming of the pilot, producers came and went so frequently…

The man behind The Twilight Zone

On Oct. 31, 1959, the sci-fi anthology show “The Twilight Zone” premiered on the CBS network. It wasn’t suppose to succeed according to the ne…

On March 15, 1977, the ABC network airs the pilot episode of “Three’s Company.” This is the American remake of the British sitcom “Man About t…

Confessing to the Black Dahlia murder

With the 2017 summer blockbuster “Wonder Woman” in movie theaters, I’d like to bring up the 1975 TV series pilot from the original DC Comics. …

In the early 19th-century, patients with diabetes were put on very harsh diets by their medical physician to avoid excess sugar intake. These …

In 1948, the red-headed movie comedienne Lucille Ball was heard by radio listeners over the CBS airwaves in the comedy program, “My Favorite H…

Planet of the Apes 50th Anniversary

Darwinism gone insane. This is the description I’d use when referring to the 1968 film adaption of Pierre Boulle’s novel. Four movie sequels, …

Is this the world's first fully robotic AI café in the world?

How student debt has grown in every state