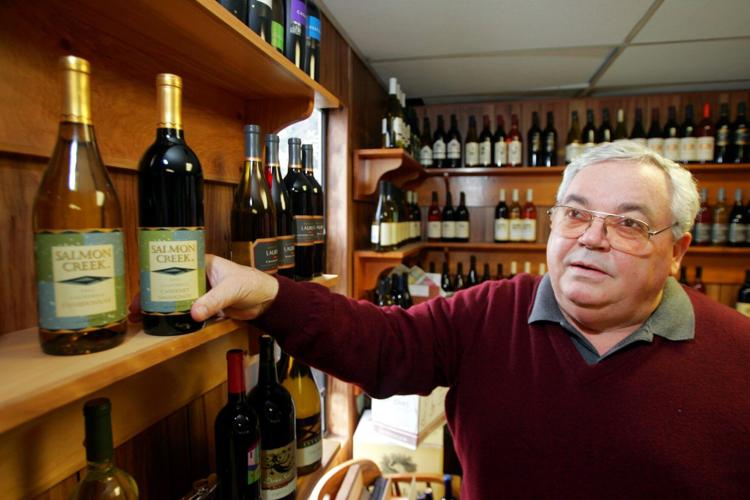 Fred Franzia, CEO of Bronco Wine Co., holds a bottle of his Salmon Creek wine while standing inside his conference and tasting room at the winery's headquarters in Ceres in 2005. Franzia, whose company was one of America's leading makers of inexpensive wines and created the Charles Shaw brand nicknamed "Two Buck Chuck," died Tuesday at age 79. 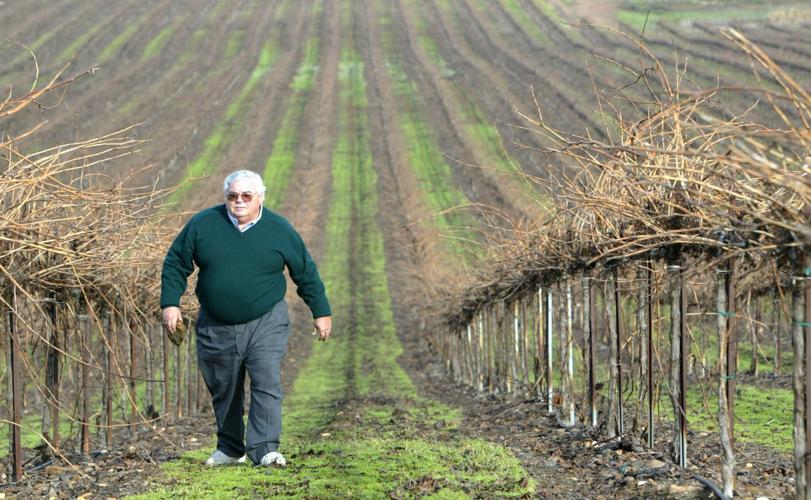 Fred Franzia, shown in his Lodi vineyard in 2003, was the vintner behind the low-priced Charles Shaw label sold by Trader Joe's groceries for two decades.

Fred Franzia, the California wine magnate best known for creating “Two Buck Chuck,” died on Tuesday, at age 79 at his home in Denair in Stanislaus County. Family members confirmed the death but did not name a cause.

Franzia was a lifelong champion of inexpensive wine and a tenacious critic of California's elite wine culture in Napa and Sonoma counties, frequently proclaiming that no bottle should cost more than $10. He was outspoken and unabashedly ambitious, building a vast empire of vineyards, production facilities and bottling plants throughout California. Ultimately, he grew Bronco Wine Co., the business he co-founded in 1973, into one of the 10 largest wine companies in the U.S., incorporating dozens of brands.

"Who says we're lower-priced? We're the best price. The others, I think, are overpriced," Franzia told the San Francisco Chronicle in 2009, in a characteristic remark.

Many familiar cheap wines fall under the Bronco umbrella, like Crane Lake and Red Truck, though the company became largely synonymous with its most famous brand, Charles Shaw, colloquially known as Two Buck Chuck.

The wine, sold exclusively through Trader Joe’s since 2002 and originally priced at $1.99 a bottle in California, earned that nickname for its affordable price that undercut its tonier competitors. "Take that and shove it, Napa," he once said in an interview.

“Core to his vision was a belief that wine should be enjoyed and consumed on every American table," Bronco's said in announcing Franzia’s death. “When asked how Bronco Wine Company can sell wine less expensive than a bottle of water, Fred T. Franzia famously countered, ‘They're overcharging for the water — don't you get it?’”

He did not own the boxed-wine brand that bears his name, Franzia; his parents, also winemakers, sold that company to the Coca-Cola Co. in 1973. (Today, the beverage company named the Wine Group owns the Franzia wine brand.)

Franzia was no stranger to controversy. He pleaded guilty to fraud charges in 1994 after falsifying the grape varieties on his wine labels, and had to abandon his role as the company's president for five years. At a time when the California wine industry was pushing for tighter labeling laws around appellations, Franzia pushed for looser regulations, which made him plenty of enemies. He campaigned — in the end, unsuccessfully — for the right to use the word "Napa" on the labels of wines that were grown and produced in the Central Valley.

Those bumps never seemed to shake Franzia's confidence in his lifelong mission. “It didn't matter,” he told The New Yorker magazine in 2009 of the guilty plea.

The U.S. Supreme Court on Monday put an end to Bronco Wine Co.'s latest effort to buck a state law that requires wine with a Napa name on the …

His son Joey Franzia, Bronco’s national sales and marketing director, said in an email that his father would have wanted his legacy to be “great wine at a great price on every American table,” and that Charles Shaw, of which Bronco has sold more than a billion bottles since the brand’s debut two decades ago, was the best embodiment of that ideal.

Fred Franzia was born in 1943 and grew up in the Central Valley, a scion of the California wine industry's first family. His uncle by marriage was Ernest Gallo, one of the founders of E. & J. Gallo Winery, today the country's largest wine company.

He attended Santa Clara University and worked in sales for his family's Franzia Brothers Winery, which was already one of the most successful wine producers in the Central Valley. The same year that his parents sold the family business, in 1973, he co-founded Bronco Wine Co. with his brother Joseph and cousin John.

Bronco amassed large swaths of vineyard land — Franzia himself said he owned over 40,000 acres at one time — and became a major player in the bulk wine market. Eventually, the company began expanding from its home base in Stanislaus County into the more well-heeled regions of Napa and Sonoma. In 1992, Franzia bought four wineries in Sonoma: Hacienda, Laurier, Grand Cru and Lyeth.

Soon afterward, Bronco became embroiled in legal troubles. The company admitted to misrepresenting the grape varieties in some of its wines, passing off a less expensive mélange of grapes for the higher-priced Zinfandel. Franzia famously referred to the scheme as "the blessing of the loads": He had instructed workers to scatter a few clusters of Zinfandel grapes on top of a bin to give the impression that the entire bin contained Zinfandel. The grape variety had been rapidly rising in popularity, and fruit prices jumped from $180 a ton in 1985 to over $1,000 a ton in 1988, according to Chronicle reporting at the time.

According to the indictment, about a million gallons of wine that Bronco produced between 1987 and 1992 were involved in the scheme. Bronco agreed to pay a $2.5 million fine, and Franzia personally paid a fine of $500,000. Although he had to relinquish his title as president and voting rights on the company's board for five years, he remained the company's chief financial officer during that time.

Then came Franzia's wine labeling crusade. For decades, Bronco had benefited from a legal loophole: Although federal law requires a wine carrying a geographical name like Napa Valley to be composed primarily of grapes from that locale — at least 85% for a viticultural area or 75% from a county or state — any brands created before 1986 had been exempt. That had allowed Franzia to sell Central Valley wines with names like Napa Ridge, Napa Creek and Rutherford Vintners. (All three brands had been created prior to 1986 and were grandfathered in, although Franzia purchased them later.)

But in 2000, the Napa Valley Vintners successfully pushed the California Legislature to close that loophole. Franzia fought back, filing a series of appeals that argued his brands should be protected by the 1986 provision. The state Supreme Court sided with the Vintners; the U.S. Supreme Court declined to hear the case in 2006, letting the law stand.

Few California vintners sympathized with Franzia, who came to be seen as someone working against the principle of truth in labeling, seen as crucial for an industry that was trying to develop a global reputation for quality.

“I think it is quite wonderful, and the vintners should be congratulated for taking this important issue on,” Andy Beckstoffer, a leading Napa Valley grapegrower, told the St. Helena Star shortly after Franzia’s courtroom defeat. “... It's a win-win situation, both for the consumers and the valley. We're telling them the truth and protecting the Napa brand.”

Despite the lengthy joust between Napa Valley winemakers and Bronco, at least one well-known local wine producer took a glass-half-full attitude toward Franzia’s drive for lower prices.

“I think Two Buck Chuck has helped to make people aware that wine is not just for special occasions,” Michael Mondavi, son of the Napa Valley wine pioneer Robert Mondavi and a longtime friend of Franzia’s, told The Associated Press in 2007 – although he quickly added: “I also believe that the vast majority of the people who originally start buying Two Buck Chuck, within a period of a year, trade up to better wines.”

In 2008, he faced further scrutiny after Maria Vasquez Jimenez, a pregnant 17-year-old employee of a farm labor contractor, died while working in a vineyard owned by a Bronco subsidiary in what an autopsy determined was a case of heat stroke, according to The New Yorker. Three officials from the contractor were later charged with involuntary manslaughter. No one from Bronco was implicated legally.

Franzia pushed back on a claim that water was not available in the vineyard on the day Jimenez died, but nonetheless funded a labor-contractor association to uphold rules on providing adequate water, shade and working conditions for farmworkers, The New Yorker reported in 2009.

Nothing, it seemed, could deter Franzia. Into his final decade, he talked about his ambitions to grow Bronco to a 100-million-case production (it's unclear whether he achieved that goal). He continued to advocate for the widespread availability of sub-$10 wines, even as the cost of doing business for California wineries soared. The price of Charles Shaw, however, has risen from its longtime $1.99; it's now $2.99 at many Trader Joe's locations.

In many ways, Franzia remained an old-school Central Valley farmer in the tradition of his parents and grandparents. In a 2016 keynote address at an industry conference, he claimed that 85% of the grape growers from whom Bronco purchased fruit do not have a written contract — it was all about informal handshake deals.

That keynote address was a sold-out event. To the end, his peers wanted to hear what Franzia had to say.

Fred Franzia is survived by his children Renata, Roma, Joseph, Carlo and Giovanna; his siblings Joseph, Joellen and Catherine; and 14 grandchildren.

This story has been modified since the original posting to clarify the federal rules for the minimum percentage of locally grown grapes required in a wine carrying a geographical description.

Dan Berger On Wine: To age or drink

Dan Berger explains the emerging, evolving science behind what allows some wines to improve with age.

Fred Franzia, CEO of Bronco Wine Co., holds a bottle of his Salmon Creek wine while standing inside his conference and tasting room at the winery's headquarters in Ceres in 2005. Franzia, whose company was one of America's leading makers of inexpensive wines and created the Charles Shaw brand nicknamed "Two Buck Chuck," died Tuesday at age 79.

Fred Franzia, shown in his Lodi vineyard in 2003, was the vintner behind the low-priced Charles Shaw label sold by Trader Joe's groceries for two decades.