LONDON (AP) — Capt. Tom Moore, the World War II veteran who walked into the hearts of a nation in lockdown as he shuffled up and down his garden to raise money for healthcare workers has died after testing positive for COVID-19. He was 100.

His family announced his death on Twitter, posting a picture of him behind his walker in a happy moment, ready for an adventure.

"The last year of our father's life was nothing short of remarkable. He was rejuvenated and experienced things he'd only ever dreamed of,'' the family's statement said. "Whilst he'd been in so many hearts for just a short time, he was an incredible father and grandfather, and he will stay alive in our hearts forever.''

Captain Tom, as he became known in newspaper headlines and TV interviews, set out to raise 1,000 pounds for Britain's National Health Service by walking 100 laps of his backyard. But his quest went viral and caught the imagination of millions stuck at home during the first wave of the pandemic. Donations poured in from across Britain and as far away as the United States and Japan, raising some 33 million pounds ($40 million).

For three weeks in April, fans were greeted with daily videos of Captain Tom, stooped with age, doggedly pushing his walker in the garden. But it was his sunny attitude during a dark moment that inspired people to look beyond illness and loss.

"Please always remember, tomorrow will be a good day," Moore said in an interview during his walk, uttering the words that became his trademark.

When Captain Tom finished his 100th lap on April 16, a military honor guard lined the path. The celebration continued on his birthday a few days later, when two World War II-era fighter planes flew overhead in tribute. Moore, a plaid blanket over his shoulders, pumped a fist as they roared past.

In July, he was knighted by Queen Elizabeth II in a socially distanced ceremony at Windsor Castle, west of London. The 94-year-old monarch used an impossibly long sword to confer the honor as Moore, wearing his wartime medals on his chest, leaned on his walker and beamed.

"I have been overwhelmed by the many honors I have received over the past weeks, but there is simply nothing that can compare to this," he tweeted after the ceremony. "I am overwhelmed with pride and joy."

Born in Keighley, West Yorkshire, on April 30, 1920, Moore completed an apprenticeship in civil engineering before being drafted into the army during the early months of World War II. After being selected for officer training, he rose to the rank of captain while serving in India, Burma and Sumatra.

After leaving the Army in 1946, Moore went to work for the family construction firm. After that failed, he became a salesman and later a manager for building materials companies. When the concrete company he was working for was threatened with closure, Moore rounded up a group of investors and bought it, preserving 60 jobs.

Along the way, he divorced his first wife and fell in love with his employer's office manager, Pamela. The couple married, had two daughters and eventually retired to Spain, but returned to England after Pamela became ill.

After wife died in 2006, Moore moved to the village of Marston Mortaine in Bedfordshire to live with his younger daughter, Hannah, and her family.

The former motorcycle racer finally slowed down after he fell and broke his hip in 2018. A walker replaced the Skoda Yeti he drove until he was 98, but he kept moving.

During a backyard barbecue in early April of last year, Moore's family challenged him to walk the entire length of the 25-meter driveway. After he made it to the end, his son-in-law encouraged him to keep going, offering to pay 1 pound for every lap and suggesting a goal of 100 laps by Moore's 100th birthday.

Things snowballed from there.

Moore thought he might be able to raise 1,000 pounds for the doctors and nurses who took care of him after he broke his hip, and his family used social media to publicize "Captain Tom Moore's 100th birthday walk for the NHS." A local radio reporter called first, then national broadcasters. Soon, international media were waiting outside the garden gate.

As he pushed his walker up and down the path, people facing the first lockdown of the pandemic watched online. Soon #TomorrowWillBeAGoodDay was trending on Twitter.

"People told me that there was something about my little walk that captured the hearts of those still in shock at the crisis," Moore wrote in his autobiography. "With a rising number of deaths and the prospect of months of lockdown, everyone was desperate for good news. Apparently, a 99-year-old former Army captain who'd fought in Burma, was recovering from a broken hip, and doing his bit for the NHS was just what they needed."

Prince Harry, Prime Minister Boris Johnson and dozens of celebrities cheered for him.

But it was the public that embraced Captain Tom, flooding the village post office with some 6,000 gifts and 140,000 birthday cards. Moore marveled that anyone would spend 2 pounds ($2.74) on a card for him, and then put on a mask to wait in line at a post office to mail it.

He was made an honorary member of the England cricket team, had a train named after him, and was recognized with the Freedom of the City of London award.

Moore enjoyed the accolades but remained focused on others.

He dedicated his autobiography, "Tomorrow Will Be a Good Day,'' to "all those who serve on the front line of any battle - be it military, psychological or medical.''

In the end, Captain Tom urged the public to look after one another, and he thanked the country he inspired for inspiring him.

"I felt a little frustrated and disappointed after I broke my hip and it knocked my confidence," he said after completing his trek. "However, the past three weeks have put a spring back in my step. I have renewed purpose and have thoroughly enjoyed every second of this exciting adventure, but I can't keep walking forever."

Sheriff: No evidence of impairment in Woods crash

Sheriff: No evidence of impairment in Woods crash

Several people in Russia have been found to be infected with avian flu of the subtype H5N8 in cases of animal-to-human transmission, authorities said.

It's final: Harry and Meghan won't return as working royals

Buckingham Palace confirmed Friday that Prince Harry and his wife, Meghan, will not be returning to royal duties, and Harry will give up his honorary military titles.

Not to be sniffed at: Agony of post-COVID-19 loss of smell

A tiny message hidden in Edvard Munch's painting "The Scream" — "Can only have been painted by a madman" — was written by the artist himself.

LONDON (AP) — Prince Charles went to a London hospital on Saturday to visit his father, Prince Philip, who was admitted earlier his week for “observation and rest” after falling ill.

BARCELONA, Spain (AP) — Protests in support of a jailed rapper turned violent for a sixth consecutive night in Barcelona on Sunday with clashes between police and groups of mostly angry youths in the center of the Spanish city.

BARCELONA, Spain (AP) — Street protests over the imprisonment of a rapper turned violent for a fourth straight night in Spain on Friday, as political responses to the disturbances strained relations inside the country's coalition government.

Clashes erupt in 2nd night of protests over rapper's jailing

MADRID (AP) — Spanish police fired rubber bullets and baton-charged protesters as clashes erupted for a second night in a row Wednesday at demonstrations against the arrest of rap artist Pablo Hasél.

Relative of British queen jailed for sex assault at castle

LONDON (AP) — A relative of Queen Elizabeth II was sentenced Tuesday to 10 months in prison for sexually assaulting a woman at his ancestral castle in Scotland. 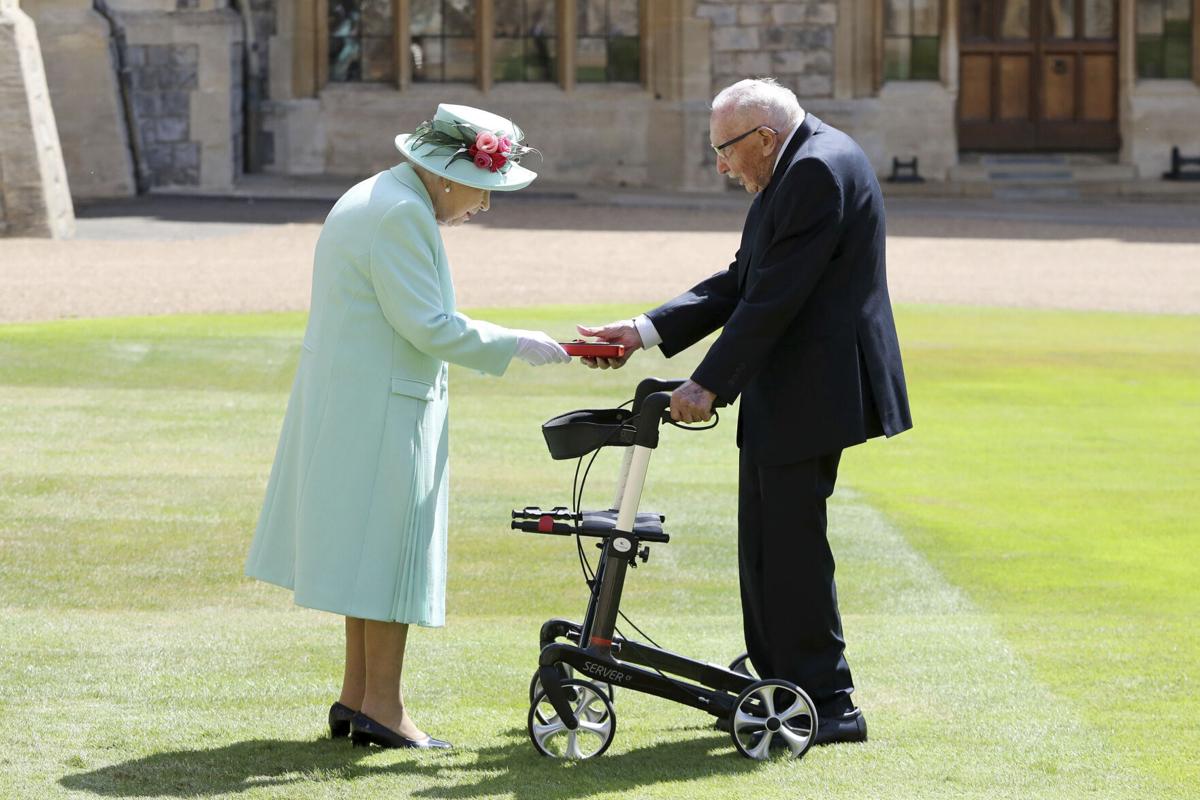 FILE - In this Friday, July 17, 2020 file photo, Captain Sir Thomas Moore receives his knighthood from Britain's Queen Elizabeth, during a ceremony at Windsor Castle in Windsor, England. Tom Moore, the 100-year-old World War II veteran who captivated the British public in the early days of the coronavirus pandemic with his fundraising efforts, has died, Tuesday Feb. 2, 2021. (Chris Jackson/Pool Photo via AP, File) 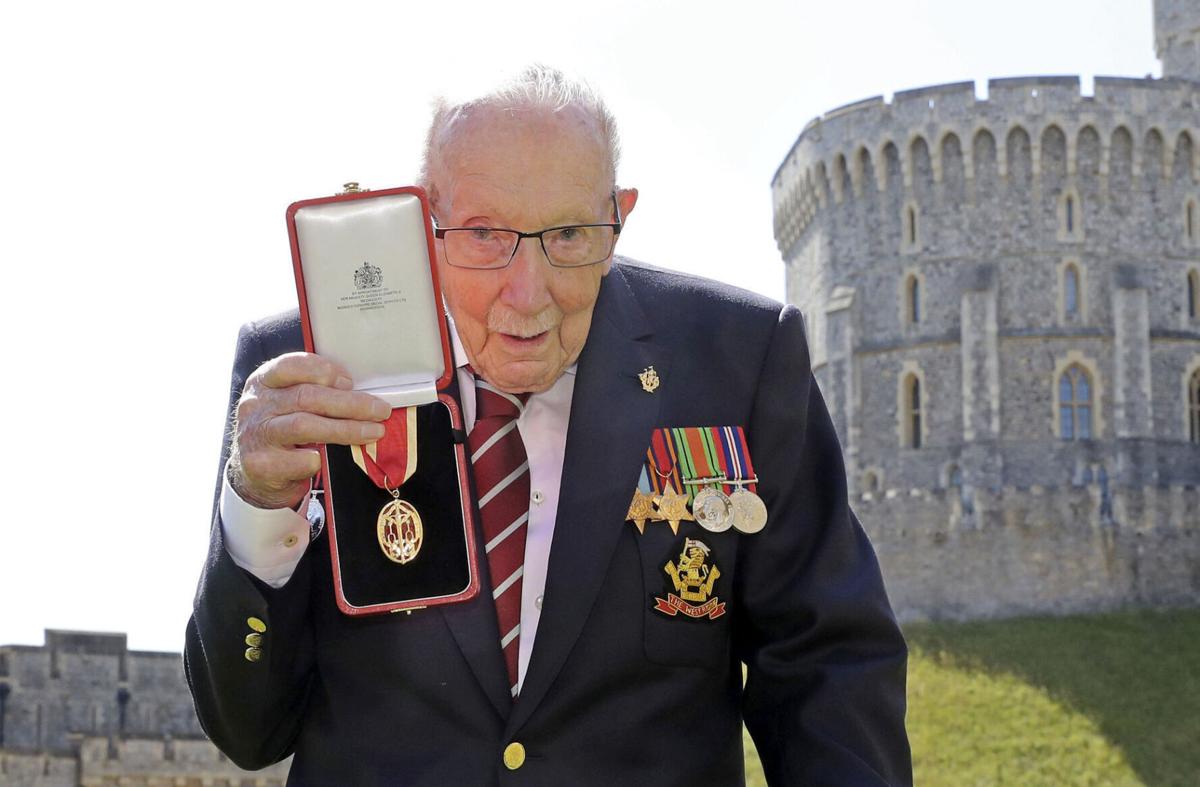 FILE - In this Friday, July 17, 2020 file photo, Captain Sir Thomas Moore poses for the media after receiving his knighthood from Britain's Queen Elizabeth, during a ceremony at Windsor Castle in Windsor, England. Tom Moore, the 100-year-old World War II veteran who captivated the British public in the early days of the coronavirus pandemic with his fundraising efforts, has died, Tuesday Feb. 2, 2021. (Chris Jackson/Pool Photo via AP, File) 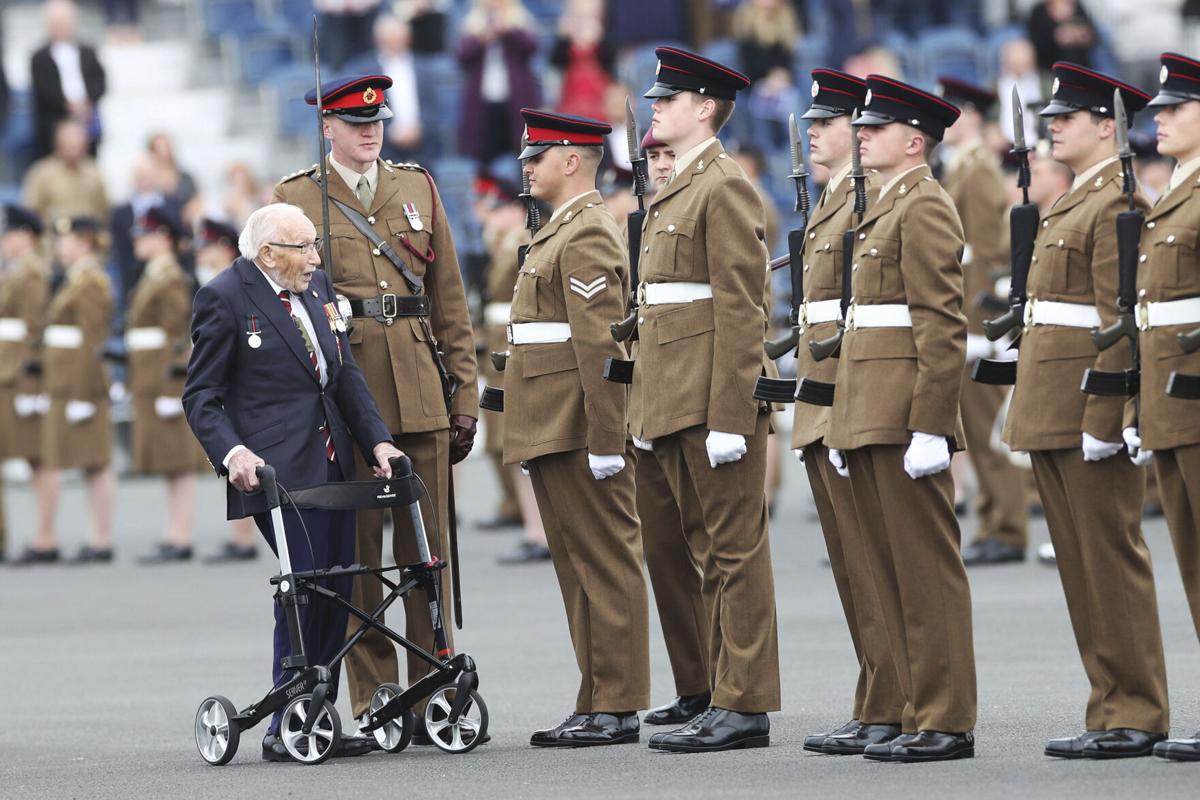 FILE - In this Sept. 10, 2020 file photo, Captain Sir Tom Moore, in the role of Chief Inspecting Officer, inspects the Junior Soldiers at their Graduation Parade during a visit to the Army Foundation College in Harrogate, England. Tom Moore, the 100-year-old World War II veteran who captivated the British public in the early days of the coronavirus pandemic with his fundraising efforts, has died, Tuesday Feb. 2, 2021. (Danny Lawson/PA via AP, File)