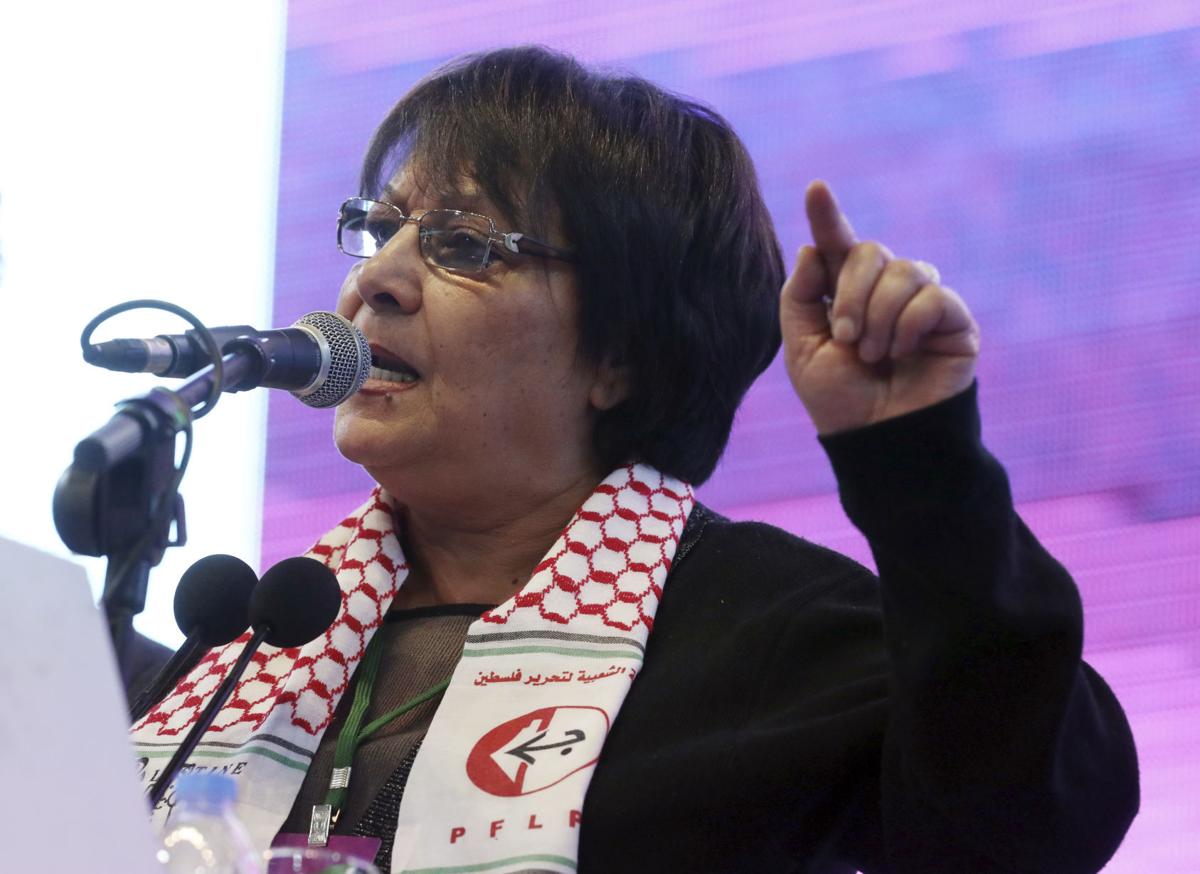 Leila Khaled, activist and prominent member of the Popular Front for the Liberation of Palestine PFLP, speaks during the congress of pro-Kurdish Peoples' Democratic Party, or HDP, in Ankara, Turkey, Sunday, Feb. 11, 2018. Khaled hijacked her first plane in 1969, TWA Flight 840 from Rome to Tel Aviv. One year later she attempted to do the same on El Al Flight 219 from Amsterdam to New York. (AP Photo/Burhan Ozbilici)

Silicon Valley giants like Facebook, Twitter and Google get plenty of justified criticism for condoning posts that promote bigotry of many stripes, plus terrorism and racist violence. Not to mention their inconsistency about removing political advertisements purveying outright lies and their frequent regurgitating of obviously faked news in their many and varied feeds.

But there’s one Silicon Valley company that now stands out for refusing to passively accept this stuff. That’s the San Jose-based Zoom Video Communications, perhaps best known as the service without which millions of schoolchildren could have been almost completely cut off from education in this pandemic-infused year.

Yes, other video conferencing apps exist, like Google Meet and Cisco Webex. But Zoom has made itself synonymous with the genre, just as Xerox once was the only word anyone used when talking copiers.

For the most part, Zoom is as passive as its Internet cohorts, interfering with almost no meetings on its space, no matter what they touch on.

But when a well-known anti-Israel and anti-Semitic academic at San Francisco State University scheduled a Zoom event this fall featuring Leila Khaled, infamous as the world’s first female airplane hijacker and one who has gone unpunished for her misdeeds for 50 years, Zoom just said no.

The company waited until after San Francisco State president Lynn Mahoney had seemingly exhausted her supply of politically correct sophistry in allowing this event to proceed. Mahoney conceded that even though she believed academic freedom demanded the seminar on Zoom be allowed to proceed, she realized it would be “deeply wounding to our Jewish students.” No, she did not mention that the pro-violence rhetoric for which Khaled is known could spur actual wounds — not mere figurative ones — to those Jewish students, who have been threatened before on the San Francisco State campus.

“Words can wound,” Mahoney said. She ignored how they can also lead to killings, as when instigators from Charles Manson to Adolf Hitler implied their minions should act while they themselves stood by and did little or nothing physical.

This putative conference was organized by SFSU’s Department of Arab and Muslim Ethnicities and Diaspora Studies, whose chairperson is Rabab Abdulhadi, well known for her own incitements. Abdulhadi is a disciple of the modern form of anti-Semitism which condemns Zionism and Israel while claiming it’s not anti-Semitic.

These folks, of course, ignore the longstanding Jewish tenet immortalized in Psalm 137 after the Babylonian conquest of the ancient Jewish kingdoms of Israel and Judah: “If I forget you, O Jerusalem, may my right hand forget its skill. May my tongue cleave to the roof of my mouth if I do not remember you,” and more.

This passage, enshrined for millennia in the Bible, demonstrates the enduring tie between Jews and their ancestral homeland, making denial of Jewish rights to sovereignty there plainly anti-Semitic.

Khaled has not merely employed rhetoric. In 1970, she was part of a team from the terrorist-designated Popular Front for the Liberation of Palestine that hijacked TWA Flight 840, a Boeing 707 diverted to Damascus. Later that year, after being treated like a heroine by Syria, she underwent plastic surgery to disguise herself and then helped hijack El Al Flight 219 to a remote airfield in England. She was quickly released by British authorities and lives today in Jordan.

There was scant likelihood Khaled could ever be admitted to the U.S. to speak. But a Zoom conference over the Internet would take care of that slight problem.

Then Zoom spoke up and the event was off. “Zoom is committed to supporting the open exchange of ideas and conversations,” a corporate statement said, “subject to certain limitations contained in our terms of service, including those related to user compliance with applicable U.S. export control, sanctions and anti-terrorism laws. In light of the speaker’s affiliation or membership in a U.S. designated terrorist organization and SFSU’s inability to confirm otherwise, we determined SFSU…may not use Zoom for this particular event.”

This was a seminal statement from a major Internet company, leaving San Francisco State with egg and hypocrisy on its face.

It also should serve as a precedent for other electronic giants to clean up their acts and their app spaces.

The California GOP are on their way to winning back at least some of the seats they lost in 2018's Blue Wave, columnist Tom Elias says.

Thomas D. Elias: Could 2020 be last hurrah for national GOP?

National Republicans are making the same mistakes as California Republicans did 25 years ago, which turned the state solid blue, columnist Tom Elias says.

The governor now has the authority to break up PG&E but seems reluctant to follow  through, columnist Tom Elias says.

Thomas D. Elias: Will flailing at the virus do much good?

Some of what the state and counties are doing to combat coronavirus looks a lot like guesswork, columnist Tom Elias says.

California is represented in the White House for the first time in more than 30 years, columnist Tom Elias says.

Leila Khaled, activist and prominent member of the Popular Front for the Liberation of Palestine PFLP, speaks during the congress of pro-Kurdish Peoples' Democratic Party, or HDP, in Ankara, Turkey, Sunday, Feb. 11, 2018. Khaled hijacked her first plane in 1969, TWA Flight 840 from Rome to Tel Aviv. One year later she attempted to do the same on El Al Flight 219 from Amsterdam to New York. (AP Photo/Burhan Ozbilici)