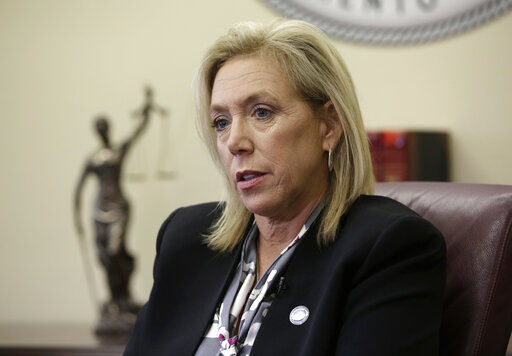 Should California continue to reduce punishment for crimes large and small, or has it gone too far and implicitly allowed criminals to prey upon Californians without fear of imprisonment?

The question has reverberated throughout the state over the last half-decade, ever since former Gov. Jerry Brown lunched a personal crusade to scale back the lock-‘em-up laws that California enacted — including some that he signed — in the 1980s and 1990s.

California voters will answer it next year by either giving newly appointed Attorney General Rob Bonta, a fervent believer in the softer approach to crime, a full term or replacing him with someone with a tougher attitude toward lawbreakers.

The conflict jelled last week when Sacramento County District Attorney Anne Marie Schubert declared her candidacy, saying, “The California criminal justice system is in chaos” due to laws and policies that value rehabilitation over punishment.

Schubert devoted much of her announcement to denouncing Los Angeles District Attorney George Gascón and San Francisco District Attorney Chesa Boudin as “rogue prosecutors,” criticizing state legislators for ignoring crime victims in their rush to soften punishments, and tying Bonta to them.

“Rob Bonta has no regard for crime victims,” Schubert told the Sacramento Bee in a pre-anouncement interview. “I think Rob Bonta is similar, if not identical, to the district attorney in San Francisco and Los Angeles.”

In Schubert, the state’s criminal justice traditionalists probably have their strongest challenger to Bonta, a state legislator who was selected by Gov. Gavin Newsom as a successor to Xavier Becerra after the latter joined the Biden administration in Washington.

While moderate Republican Nathan Hochman, former assistant U.S. attorney in the Bush administration, also is running, he is little known while Schubert, a former Republican who is not registered with a political party, achieved statewide and even national attention for recently prosecuting serial rapist and murderer Joseph James DeAngelo Jr. Dubbed the Golden State Killer, DeAngelo, a former policeman, was tied to the decades-old crime spree by a novel use of DNA evidence.

Schubert can expect support from all but a handful of the state’s other local prosecutors and police organizations which have opposed efforts by Brown and like-minded legislators to soften punishment. She surrounded herself with families of crime victims as she announced her candidacy.

Bonta, on the other hand, will be backed by the national criminal justice reform movement that has been working state-by-state and county-by-county to replace traditionalist prosecutors with those favoring rehabilitation over incarceration. Billionaire investor George Soros has been one of the major drivers behind the movement.

Schubert, in fact, had overcome such a challenge in winning re-election three years ago. When Gascón, who had been San Francisco’s district attorney, moved to Los Angeles and unseated District Attorney Jackie Lacey in 2020, it marked a new intensity in the philosophical clash.

He, Boudin and two other like-minded district attorneys have battled with the California District Attorneys Association over policy issues and formed their own group, the Prosecutors Alliance of California, to push for criminal justice reforms.

The next big California battle for the contending factions was to have been in Orange County, where District Attorney Todd Spitzer, a former Republican legislator, will be facing Peter Hardin, a Democrat and former prosecutor, next year.

However, Becerra’s resignation, Bonta’s appointment and Schubert’s declaration of candidacy create an even more intense showdown over crime and punishment in the nation’s most populous state.

Should Schubert prevail next year, it would not only be a big win for criminal justice traditionalists, but also make her a potential candidate for governor or U.S. Senate thereafter.

Californians face another of its periodic droughts and also long-term questions about the supply and uses of water, columnist Dan Walters says.

Dan Walters: Is corporate tax hike too hot to handle?

Legislation to alter how California taxes multinational corporations is one of the year's most controversial issues, columnist Dan Walters says.

Dan Walters: Is Newsom making any difference on fracking?