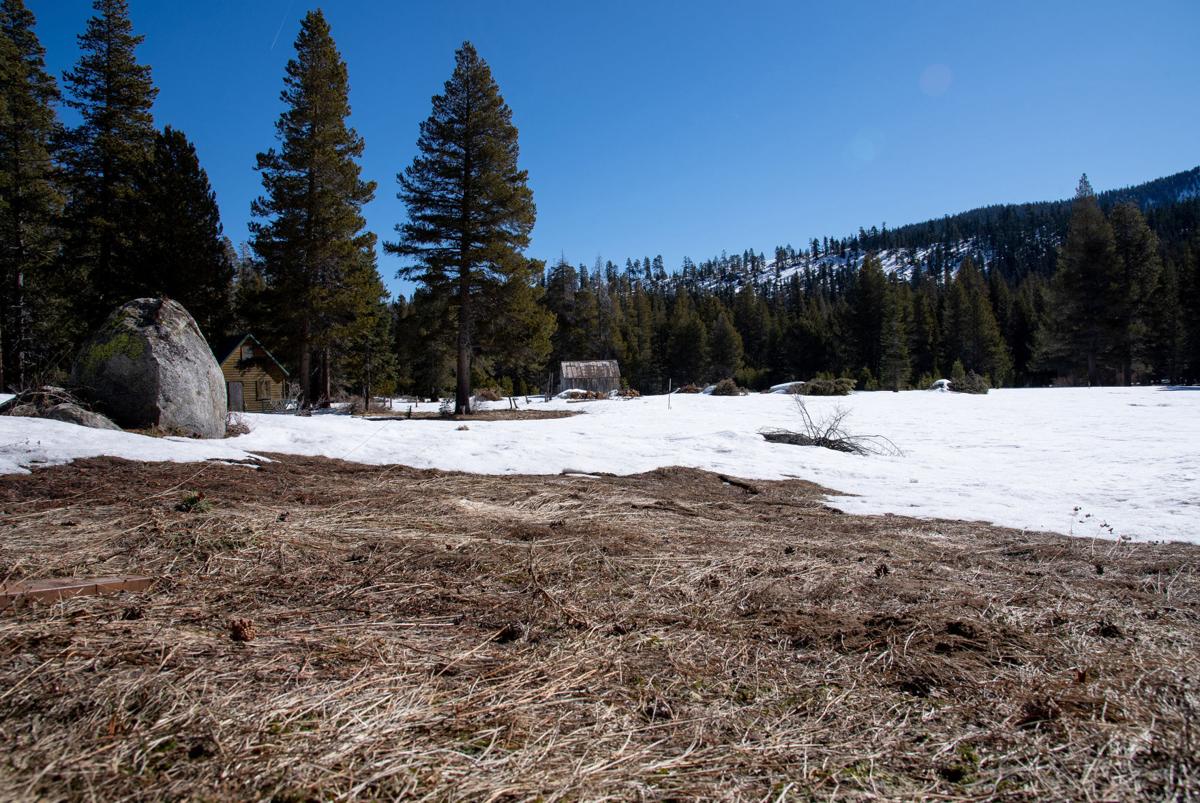 A patch of bare ground visible during the third snow survey of the 2020 season at Phillips Station in the Sierra Nevada Mountains on Feb. 27, 2020. The Sierra Nevada snowpack in March was just 61% of its historical average for this date.

Northern California got some some much-needed rain late in April, but late-season precipitation does not change the reality that California is in one of its periodic droughts after two dry years.

Major Northern California reservoirs are only about half-full due to scanty runoff from mountain snowpacks, farmers are getting tiny percentages of their normal water allotments, and local water agencies are beginning to impose restrictions on household use.

We’ve seen many droughts, but this one seems somehow different, perhaps because it’s occurring just as Californians are trying to recover, personally and economically, from the deadly COVID-19 pandemic.

In fact, some aspects will be different, particularly for farmers who generally consume three-quarters of the water distributed for human use in California.

During previous droughts, farmers survived by purchasing extra water, by drilling wells to tap underground aquifers, and by persuading officials to divert water that otherwise would maintain wildlife habitats.

During the previous multi-year drought, San Joaquin Valley aquifers were so heavily overdrafted that in many areas the land above them collapsed, a phenomenon known as “subsidence.” A section of the Friant-Kern canal was rendered inoperable. In 2014, the Legislature and then-Gov. Jerry Brown enacted an historic groundwater regulation law aimed at preventing a recurrence.

The law’s precise groundwater restrictions are still being formulated, but it’s evident that farmers will not be able, this time around, to pump as much water as they want to offset curtailed supplies from reservoirs. Many will be compelled to leave some fields unplanted, beginning what agricultural economists believe will be widespread farmland fallowing as groundwater rules take effect.

California farmers had an ally in former President Donald Trump, who pushed federal officials to maximize agricultural diversions from the Sacramento-San Joaquin Delta and reduce flows for fish and other wildlife. However, with Joe Biden in the White House, such diversions will be a harder sell.

Farmers also want Gov. Gavin Newsom to declare a drought emergency so they can press him for more Delta water, but while Newsom declared an emergency in Mendocino and Sonoma counties last week, he’s clearly reluctant to do it for the whole state. If he did, it could put him in a no-win situation as he faces a recall election later this year — damned by environmentalists if he helps farmers by hurting the Delta and damned by farmers if he doesn’t.

However this drought plays out, California faces longer-term water supply issues, including the projected impacts of climate change, such as diminishing winter snowpacks.

Newsom’s administration has published a “Water Resilience Portfolio” aimed at managing those issues and hinged on an assumption that the state’s many water interests will act cooperatively to meet the common threat.

However, California's water supply has always been more contentious than cooperative, pitting north against the south, urban areas against rural communities, and farmers against environmentalists.

Lurking in the background of this drought, as well as the uncertain supply future, is what would be the most divisive of all water issues — water rights, some of which date back more than a century.

The comprehensive water management envisioned in Newsom’s resilience portfolio probably cannot succeed unless the state modifies, seizes or purchases those long-ingrained water use rights. During the previous drought, the state Water Resources Control Board flirted with a direct challenge to historic water rights but then backed away.

In effect, the groundwater regulation law superseded previous legal rights to pump from aquifers and thus could be a precursor to a titanic battle over surface water rights as supplies tighten.

Napa Green, an independent non-profit, runs sustainability certification programs for vineyards and wineries. The new certification brings it to the next level of direct action on climate change and social responsibility.

Dan Walters: A showdown over crime and punishment looms

A patch of bare ground visible during the third snow survey of the 2020 season at Phillips Station in the Sierra Nevada Mountains on Feb. 27, 2020. The Sierra Nevada snowpack in March was just 61% of its historical average for this date.