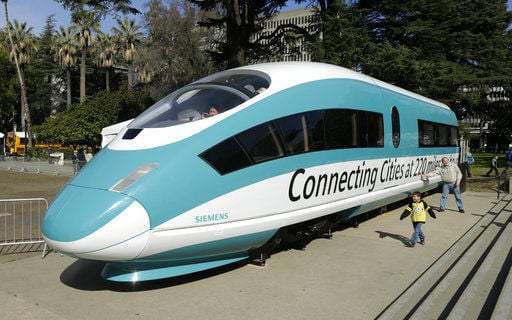 A full-scale mock-up of a high-speed train, displayed at the Capitol in Sacramento.

A full-scale mock-up of a high-speed train, displayed at the Capitol in Sacramento.

As oft-noted in this space, those in California’s state government — governors, legislators and agency directors — have an unfortunate habit of starting programs and projects that are never fully implemented.

These governmental orphans fall roughly into two categories, those that have some valid rationale and those that don’t.

For instance, applying technology to public services makes perfect conceptual sense, but we’ve lost count on how many “information technology” projects have consumed billions of dollars without delivering the promised benefits of better service delivery and better data.

The latest poster child for half-baked IT projects is FI$Cal, which is supposed to consolidate numerous financial management and reporting systems into one, but has already cost more than $1 billion and shows no signs of working anytime soon.

Using technology still makes sense, but if the state bureaucracy is incapable of implementing it, it’s just money down a rathole.

Speaking of which, many billions of dollars are also going down that dark hole for projects that made no sense in the first place, with the state’s bullet train a prime example.

For decades, a certain segment of California’s population has swooned over the notion of an uber-fast north-south rail system, ala those in Japan, China and Europe. However, advocates never provided a logical rationale, given that traveling up and down California is relatively easy while movement within urban areas is our toughest transportation problem.

Eleven years ago, then-Gov. Arnold Schwarzenegger and other advocates persuaded voters to pass a $9.95 billion bond issue, assuring them that the system could be built for about $40 billion, would attract outside investors, and be operationally self-supporting.

None of that has come to pass. The state’s High-Speed Rail Authority is now more or less building about 100 miles of track in the San Joaquin Valley, using money from bonds and $3.5 billion in federal grants.

In January, a newly inaugurated Gov. Gavin Newsom more or less abandoned the notion of a statewide system, citing lack of money, and then more or less backtracked and said he wanted to slightly lengthen and complete the San Joaquin Valley section.

President Donald Trump’s administration, always on the prowl for ways to ding blue California, then held up nearly $1 billion in grant funds and demanded that money already sent, and partially spent, be returned because the underlying contract had been violated.

Defying federal officials and its own peer review committee, the bullet train board this month decided to solicit bids from three firms to electrify the track now under construction and build a maintenance garage to service the system.

As the bullet train project gasps for air, more diversions of voter-approved bullet train bonds may be in the offing.

The Federal Railroad Administration warned the state not to move forward, saying in a letter, “It is premature for (the rail authority) to undertake another major design-build contract. The current construction packages continue to face significant and continuing delays building the necessary civil construction.”

There’s not enough money in the kitty to do what’s now contemplated, and proceeding seems to be a defiant gesture by Newsom, who fancies himself a leader of the anti-Trump “resistance,” and a political wager that Trump will be replaced by a friendly Democrat a year hence.

It also sets up a confrontation with legislators, such as Assembly Speaker Anthony Rendon, who see the bullet train as a loser and would like to tap the bonds for improving urban commuter service.

Some of the money has already been siphoned away to electrify commuter rail service along the San Francisco Peninsula and Rendon wants a similar allocation for Southern California. That makes much more sense than completing a mini-bullet train to nowhere.

The bullet train utterly lacks a rational purpose, has been ill-managed from the onset and is a black financial hole. If the Trumpies strangle it, they would be doing California a big favor.