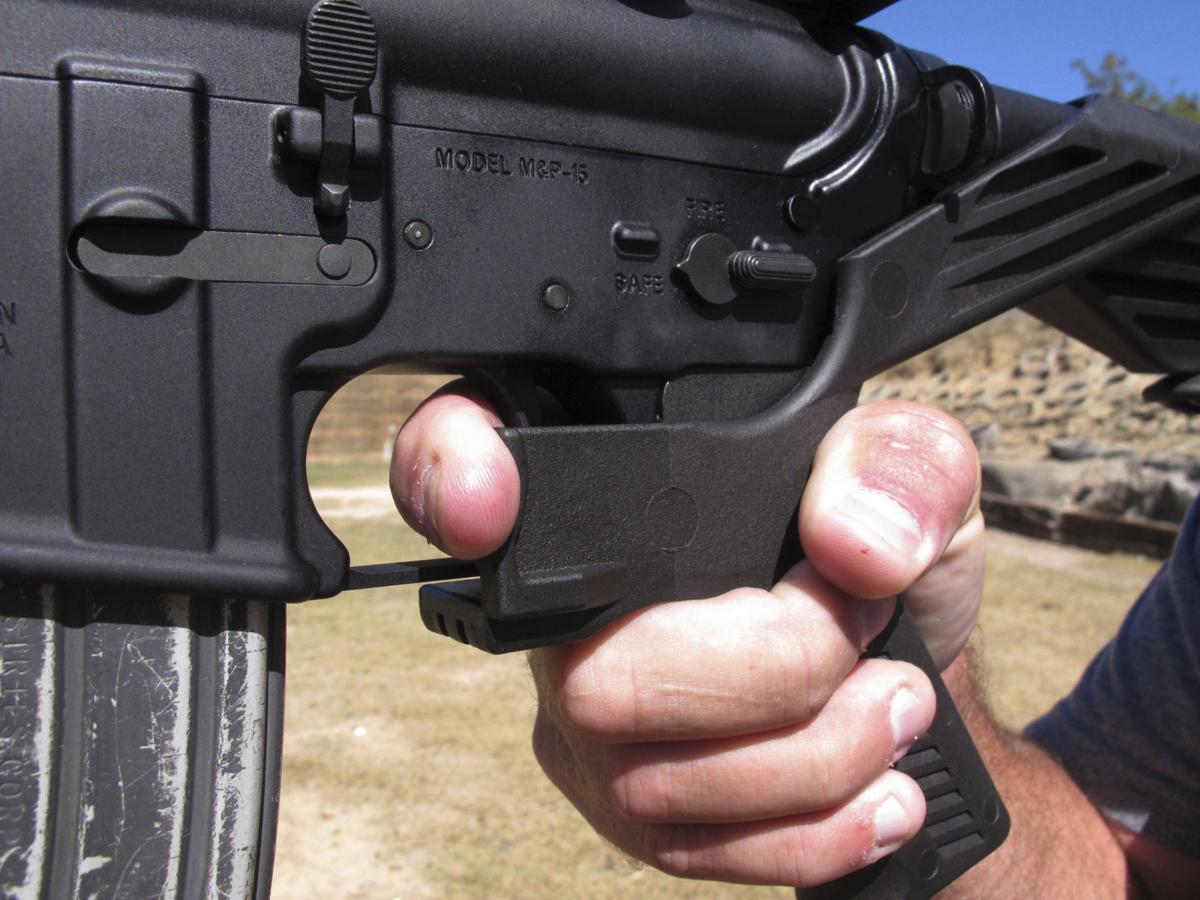 Shooting instructor Frankie McRae demonstrates the grip on an AR-15 rifle fitted with a bump stock Oct. 4 at his gun club in Bunnlevel, N.C.

California governors, legislators and voters have been imposing additional restrictions on guns and ammunition, one atop another, for more than a half-century on the theory that they save lives.

California now has the nation’s most restrictive gun laws but gun owners contend that they violate the U.S. Constitution’s “right to bear arms,” and the issue could land in the Supreme Court after three decisions by one federal judge supporting that contention.

“This case is not about extraordinary weapons lying at the outer limits of Second Amendment protection,” Benitez wrote. “The banned ‘assault weapons’ are not bazookas, howitzers, or machine guns. Those arms are dangerous and solely useful for military purposes,” his ruling said. “Instead, the firearms deemed ‘assault weapons’ are fairly ordinary, popular, modern.”

Previously, Benitez had ruled against a state ban on firearm magazines containing more than 10 cartridges and a requirement that ammunition purchasers must undergo background checks.

The previous rulings are making their way through the appellate process and the latest case is headed there as a precursor to a probable showdown in the Supreme Court, which now has a 6-3 conservative majority with recent appointments by former President Donald Trump.

Benitez’s previous rulings on magazine and ammunition restrictions only imply that restrictions on actual weapons are unconstitutional while his latest squarely frames the issue, and thus its outcome, whatever it may be, will carry the most weight.

A complicating factor is how California law defines an “assault weapon.” Its definition does not deal with lethality, but rather a weapon’s “features” such as a detachable magazine or a pistol grip.

Thus two semi-automatic rifles that fire identical cartridges can be differentiated essentially by their appearance. One that looks scary because of its “features,” such as the AR-15, is supposedly banned while another that fires the same .223 cartridge, such as Ruger’s Mini-14, is perfectly legal.

One says “supposedly” because AR-15s and similar weapons are readily and legally available for sale in California after being rendered “featureless” by slight modifications to their appearance.

It means that state officials who defend California’s gun laws are in the awkward position of claiming that a weapon’s scary looks is sufficient cause to be prohibited.

“This is an average case about average guns used in average ways for average purposes,” Benitez said. “One is to be forgiven if one is persuaded by news media and others that the nation is awash with murderous AR-15 assault rifles. The facts, however, do not support this hyperbole, and facts matter.”

“Today’s decision is a direct threat to public safety and the lives of innocent Californians, period,” Newsom said in a statement. “As the son of a judge, I grew up with deep respect for the judicial process and the importance of a judge’s ability to make impartial fact-based rulings, but the fact that this judge compared the AR-15 — a weapon of war that’s used on the battlefield — to a Swiss Army Knife completely undermines the credibility of this decision and is a slap in the face to the families who’ve lost loved ones to this weapon. We’re not backing down from this fight, and we’ll continue pushing for common sense gun laws that will save lives.”

Given the makeup of the Supreme Court, however, Newsom’s chances of prevailing may be less than 50-50.

The fate of Calbright, an online community college, will reveal whether California is willing to shut down failing programs and projects, columnist Dan Walters says.

Gov. Gavin Newsom owes an apology to those who have suffered distress from the state's inabilty to process unemployment insurance claims.

California's perpetual conflict over charter schools flared up again this year, resulting in a temporary truce.

California has finally achieved the zero population growth that some environmentalists had urged decades ago, but it has its own set of challenges, columnist Dan Walters said.

The California Legislature passed a state budget last week, but it was just a self-serving charade because there are still issues to be settled, columnist Dan Walters says.

Shooting instructor Frankie McRae demonstrates the grip on an AR-15 rifle fitted with a bump stock Oct. 4 at his gun club in Bunnlevel, N.C.