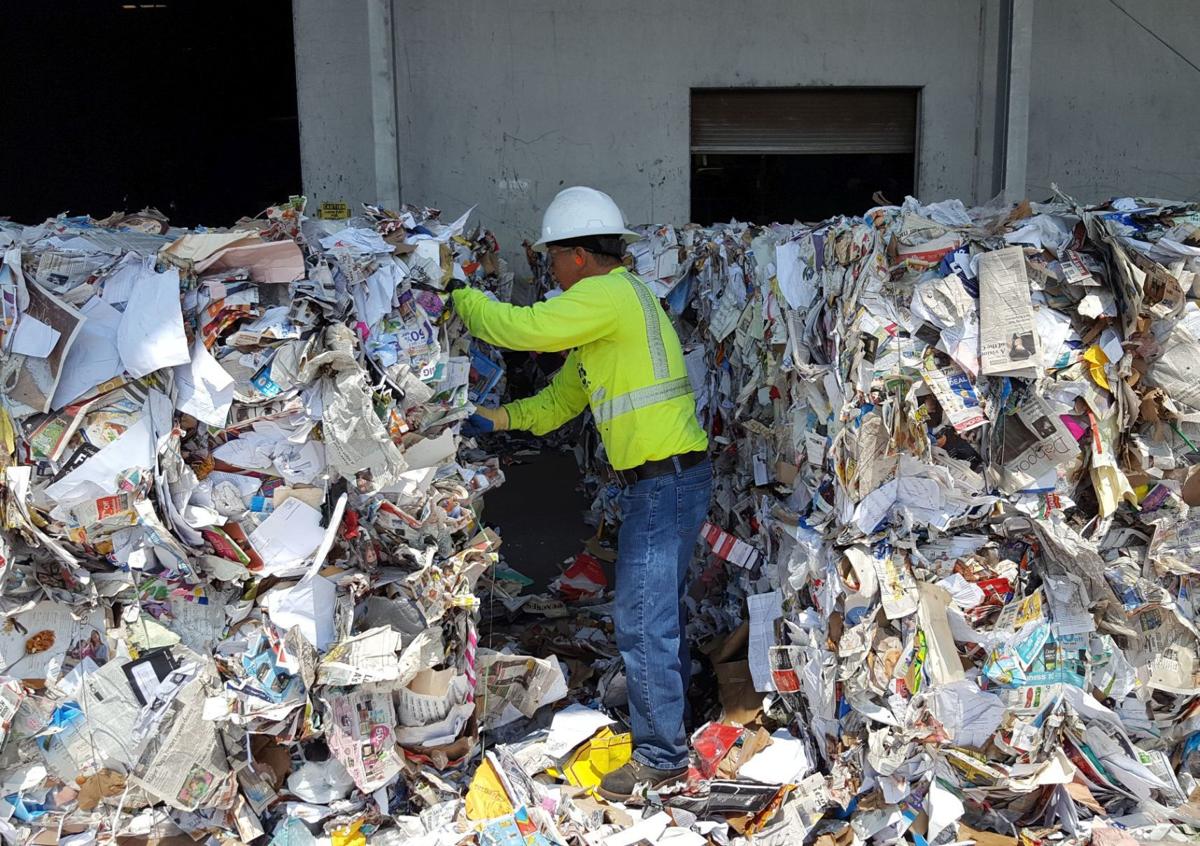 A worker at Napa Recycling & Waste Services in August 2018 pulled plastics from bales of recycled material to prevent them from becoming contaminated and losing their value on the open market.

A worker at Napa Recycling & Waste Services in August 2018 pulled plastics from bales of recycled material to prevent them from becoming contaminated and losing their value on the open market.

California’s Department of Motor Vehicles has long been a poster child for managerial shortcomings among the state’s many agencies.

It is, however, not the only example of how state programs fail to complete their designated missions. Another is the ambitious effort to reduce the nearly 80 million tons of trash that Californians generate each year, as a new series of articles in CalMatters is revealing.

Thirty years ago, the Legislature passed and then-Gov. George Deukmejian signed the Integrated Waste Management Act with the stated goal of reducing, recycling or composting 75 percent of the state’s “solid waste” by 2020.

It created a full-time, six-member Integrated Waste Management Board and equipped it with new powers to compel local governments and private entities to do what was necessary to meet the goal.

A new state agency, known as CalRecycle, was formed to promote recycling of glass, plastic, paper and other materials and it was assumed that if everything went well, there would be a ready global market for them.

However, the 1989 law was not the end of political attention to reducing the amount of waste that either went into landfills or wound up polluting streams, rivers and the Pacific Ocean.

Dozens, perhaps even hundreds, of additional laws were passed in the following years, as this year-by-year compilation shows. Most recently, the Legislature banned single-use plastic bags that grocers and other merchants had been issuing to their customers.

With the 2020 deadline looming, however, the reduction goal may be getting further away, as CalMatters environmental writer Rachel Becker details in the first article of her series on the issue.

In part, it’s because global markets for California’s recyclables has been shrinking. Buyers such as China have become less willing to accept materials by limiting what they will buy and demanding higher quality – a situation that stems, at least in part, from the Trump administration’s broader trade conflict with China.

China’s 2017 restrictions on imported recyclables “started sending recyclers and recycling markets into a tailspin here,” Kate O’Neill, an associate professor in environmental science at UC, Berkeley and an expert on the international waste trade, told Becker. Since then, countries including Thailand, Vietnam, and India have announced plans to ban scrap plastic.

CalRecycle, which has a $1.5 billion annual budget, has been fairly successful in persuading Californians of the need to separate their recyclable waste from ordinary garbage headed for the dump, but it and local governments have not done a very good job of educating consumers about what is acceptable, which has exacerbated the global market problem.

The shortcomings in California’s waste management program have not gone unnoticed. Those involved at the working level, particularly recyclers, have complained repeatedly about a lack of financial incentives.

The state auditor’s office has issued regular critiques of the beverage container recycling program, which is one of the most important aspects of CalRecycle’s efforts. Consumers pay recycling fees, typically a nickel a container, and then can return containers to recycling depots to reclaim their deposits.

One report, issued five years ago, says the “program’s long-term financial health is at risk” because its costs were outstripping revenues by as much as $100 million a year. Countless recycling centers shut their doors and fraud, the auditor said, is a major shortcoming of the beverage container program as containers are shipped into California from other states to claim refunds.

When the DMV is fixed, if it ever is, maybe the waste reduction program should merit some political attention.

Nothing is, it seems, too inconsequential for those who sit around dreaming up new laws to regulate human behavior.