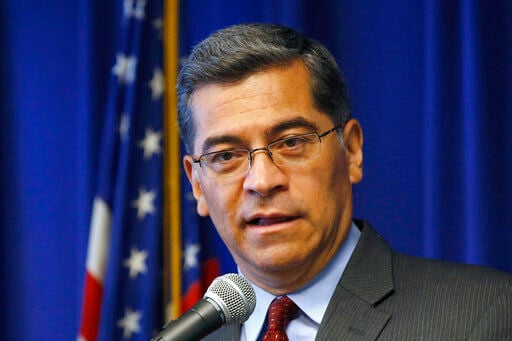 FILE - In this June 3, 2019, file photo, California Attorney General Xavier Becerra speaks during a news conference in Sacramento, Calif. Becerra on Monday, June 15, 2020, called for California to create a way to end the law enforcement careers of police officers who engage in serious misconduct, along with other changes in tactics and training in the wake of weeks of national protests over police brutality. (AP Photo/Rich Pedroncelli, File)

One would think that with demonstrations against police brutality raging throughout the state, even in small rural towns, officers who monitored the protests would have been on their best behavior.

Not so. Gratuitous violence against marchers, innocent bystanders and reporters wearing identifying vests and/or displaying credentials was rampant.

In Vallejo, which has a sorry history of police killings, Detective Jarrett Tonn, riding in a patrol car during demonstrations, saw Sean Monterrosa carrying what he thought was a gun and fired five shots through the car’s window, killing the young man.

Vallejo police didn’t even announce Monterrosa’s death for a day and a half, but finally declared that Monterrosa had no gun and was on his knees with his arms raised when Tonn shot.

“They executed him. There was no reason for them to kill my brother like that,” Monterrosa’s sister, Ashley Monterrosa, told ABC7 News.

It’s an old story, sadly reminiscent of what happened in Sacramento two years ago when two cops fired about 20 bullets at a shadowy figure they thought had a gun. A young black man, Stephon Clark, was shot eight times and died with a cellphone in his hand, not a gun.

Monterrosa’s death in Vallejo may become the first test of the new law.

Attorney General Xavier Becerra announced that he will review the Vallejo Police Department, whose officers have killed 19 suspects since 2010. No Vallejo officer has been charged for an on-duty shooting, but taxpayers have paid out more than $7 million to settle civil lawsuits.

Becerra stopped short of intervening in the Monterrosa case, but the Solano County district attorney’s office is on notice as it decides whether Tonn should be prosecuted.

California clearly has a problem with police violence, not only in the long list of dead unarmed suspects, but in the aggressive tactics during protests of George Floyd’s suffocation death with a Minneapolis policeman kneeling on his neck.

Police unions have long had a cozy arrangement with the Democratic politicians who dominate California, trading campaign endorsements for hefty benefits and special legal protections. California is one of the very few states, for instance, that don’t revoke the “certifications” of officers who are fired, thus allowing them to continue working elsewhere.

That unholy alliance cracked a bit last year with the passage of the new shooting standard, and with events this year, the unions know that their clout is fading.

In full-page newspaper ads this month, the unions representing cops in Los Angeles, San Francisco and San Jose proposed a slate of reforms.

“No words can convey our collective disgust and sorrow for the murder of George Floyd,” the unions said in the advertisement. “We have an obligation as a profession and as human beings to express our sorrow by taking action.”

Their plan includes reforms adopted by some individual agencies, a national database of former police officers fired for gross misconduct, and a national use-of-force standard that “emphasizes reverence for life, de-escalation, a duty to intercede, proportional responses to dangerous incidents and strong accountability.”

It’s a start, but only a start. We need good cops to deal with those who prey on the public, and we need alternatives to police for purely social problems such as public intoxication. The onus is on Newsom, Becerra and other Democratic officials to step up.

FILE - In this June 3, 2019, file photo, California Attorney General Xavier Becerra speaks during a news conference in Sacramento, Calif. Becerra on Monday, June 15, 2020, called for California to create a way to end the law enforcement careers of police officers who engage in serious misconduct, along with other changes in tactics and training in the wake of weeks of national protests over police brutality. (AP Photo/Rich Pedroncelli, File)