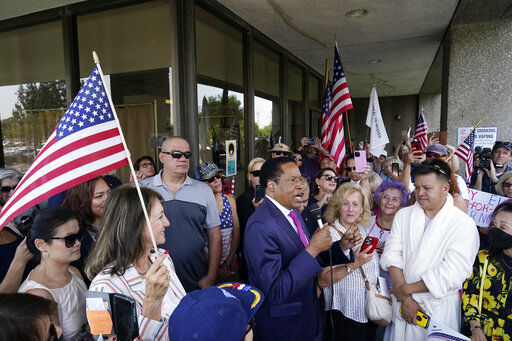 FILE — In this July 13, 2021 file photo conservative radio talk show host Larry Elder speaks to supporters during a campaign stop, in Norwalk, Calif. Elder, who is running to replace Democratic Gov. Gavin Newsom in the Sept. 14 recall election, says he would erase state vaccine and mask mandates, is critical of gun control, opposes the minimum wage and disputes the notion of systemic racism in America. (AP Photo/Marcio Jose Sanchez, File)

“The enemy of my enemy is my friend” is an ancient proverb thought to date from a 4th century BC Sanskrit writing on statecraft.

The most graphic example of its application occurred in World War II, when Soviet Russia, which had a “nonagression” pact with Nazi Germany, was suddenly attacked by its erstwhile ally.

Overnight, the Soviet Union’s dictator, Joseph Stalin, was transformed from enemy to a partner of the U.S. and Great Britain in their war against Germany and its dictator, Adolf Hitler. Militarily, it was the best thing that could have happened for the Western allies because had it not happened, Hitler might easily have triumphed.

Something like that is happening in California as Gov. Gavin Newsom fights off a campaign to oust him from office via a September 14 recall election.

The overall theme of the attacks is that Elder’s extreme right-wing views make him unacceptable as an officeholder, and the drumbeat quickened last week when Elder’s former girlfriend accused him of being verbally abusive and even, at one point, waving a gun at her.

“I, for one brief moment, believed that he intended to shoot me. I was in fear for my life,” Alexandra Datig said, adding: “At the same time, I’m also very fearless and, having grown up around guns, I didn’t take it seriously.”

Elder, of course, denied the gun allegation, but immediately, his critics turned from saying he shouldn’t be governor to demanding that he drop out of the contest.

The Sacramento Bee declared that Elder’s “misogynistic attitudes toward women and the damning allegations revealed this week about how he treated his ex-fiancee Alexandra Datig are disqualifying, and make him wholly unfit to be California governor. Elder must drop out of the race immediately.”

“Elder’s backwards positions harm women’s rights and the livelihoods of California families,” Faulconer said in a late Friday afternoon statement. “Elder’s lack of judgement and character flaws threaten the success and credibility of this historic recall movement — Californians will not vote to recall one dysfunctional governor if it means replacing him with another.”

So what effect will this barrage of criticism from Newsom, Faulconer and pro-Newsom media have on Elder and the recall drive?

Newsom obviously hopes that focusing on Elder and the supposedly terrible fate that would befall California should he become governor will not only change the subject but motivate Democrats to vote against the recall. Democratic voter apathy is, polls indicate, the prime reason Newsom is in danger of losing his office.

However, the focus on Elder could also make it more likely that he would, in fact, become governor should the recall succeed. Voters who favor the recall could easily conclude that if Newsom, the media and Faulconer are ganging up on Elder, perhaps he’s just the man to lead the revolt against the political status quo.

That’s what happened in 2016 when Donald Trump emerged from the Republican pack to become the GOP’s presidential nominee. The more Trump was attacked for his many personal shortcomings, the more attractive he became to angry Republican voters. The rest, as they say, is history.

Elder may be, as his critics say, unfit to be governor. However, like Trump, he probably loves the attention because his enemies are making him more friends.

Allan Zaremberg, the Capitol's top business leader as CEO of the California Chamber of Commerce, is retiring with an enviable track record, columnist Dan Walters says.

The wildfires sweeping through California could affect the recall campaign aimed at Gov. Gavin Newsom, whose fire management policies have been erratic, columnist Dan Walters says.

Dan Walters: What happens if Newsom is recalled?

With California Gov. Gavin Newsom's recall election too close to call, it's time to ponder what might happen if he is ousted,columnist Dan Walters says.

Dan Walters: California’s kids have been used and abused

The state’s six million public school students have been used as pawns in political power struggles and abused by having their educations stunted, columnist Dan Walters says

Dan Walters: California’s gig worker fight is back in the courts

California's epic battle over the status of gig workers has entered a new phase with a judge overturning Proposition 22, a 2020 ballot measure sponsored by Uber and other transportation and delivery companies, columnist Dan Walters says.

Dan Walters: Who will control sports betting in California?

Legal wagering on sports is coming to California but dueling ballot measures will determine who controls and profits from the potentially huge amounts of money involved, columnist Dan Walters says.

Dan Walters: If recalled, what’s next for Gavin Newsom?

How would California Gov. Gavin Newsom continue to pursue a political career if he's recalled from office this year, columnist Dan Walters asks?

As he battles to avoid being recalled, California Gov. Gavin Newsom faces another issue: whether Sirhan Sirhan, who assassinated Robert Kennedy, should be paroled, columnist Dan Walters says.

FILE — In this July 13, 2021 file photo conservative radio talk show host Larry Elder speaks to supporters during a campaign stop, in Norwalk, Calif. Elder, who is running to replace Democratic Gov. Gavin Newsom in the Sept. 14 recall election, says he would erase state vaccine and mask mandates, is critical of gun control, opposes the minimum wage and disputes the notion of systemic racism in America. (AP Photo/Marcio Jose Sanchez, File)