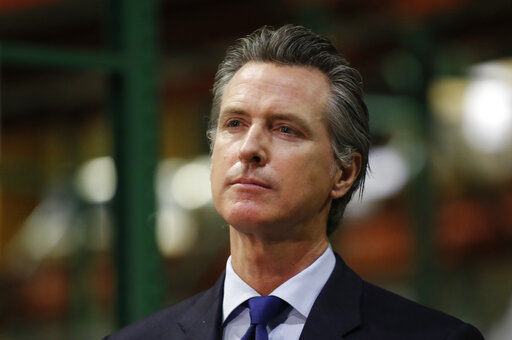 Gov. Gavin Newsom listens to a reporter's question as he gives an update on the state's response to the coronavirus pandemic, during a news conference in Rancho Cordova, Calif., Friday, June 26, 2020. Newsom said he wants Imperial County in Southern California to reimpose a stay-at-home order amid a surge in positive coronavirus tests. (AP Photo/Rich Pedroncelli, Pool)

Managing something as new and unpredictable as the COVID-19 pandemic is, by its nature, a difficult task.

That said, Californians are rightfully confused by the rapid, even erratic, changes of course that Gov. Gavin Newsom has steered in recent weeks after drawing praise for his early and straightforward actions in the first days of the public health crisis.

Newsom’s regular, although no longer weekly, webcasts on COVID-19 have evolved into repetitive talkathons resembling those annoying public television fundraising breaks. At one, he will boast of the state’s progress in slowing the infection rate, and at another chastise Californians for not wearing their masks and threaten a crackdown.

In March, Newson shut down large segments of the state’s previously booming economy and soon laid out seemingly firm markers that had to be met before reopening them.

But as the economic toll mounted, with millions of suddenly jobless workers, he began to back off even as infections and deaths continued to mount. He gave counties the option to reopen their economies if they met certain criteria, saying “localism is determinitive” and seemingly shifting the political onus to local officials.

By early June, many segments of the economy were opening. But within a couple of weeks, infections and deaths were spiking alarmingly and Newsom was becoming defensive about the wisdom of reopening.

“When you have people that are struggling and suffering with severe mental health and brain health issues, when people are not attending to their physical and emotional needs, those social determinants of health also must be considered,” Newsom said on June 15. “We have to recognize you can’t be in a permanent state where people are locked away — for months and months and months and months on end — to see lives and livelihoods completely destroyed, without considering the health impact of those decisions as well.”

However, from rationalizing the reopening, Newsom has shifted in recent days to admonishing Californians for not being diligent enough in wearing the masks he mandated and avoiding large, virus-spreading congregations. He has hinted that he might have to clamp down on the economy once again and threatened counties that ignore state guidelines with a loss of state aid.

“We give an enormous amount of power, control and authority to local government, but what we’re now looking for is accountability,” Newsom said. “If they decide, ‘You know what? Even though the numbers are going up, we’re done. We’ve got this, and we’re just going to dismiss these new rules and regulations,’ we’re going to attach some considerations and consequences to that,” he warned.

At the end of June, just hours after issuing harsh warnings about noncompliance, he staged still another webcast that was characteristically long-winded, repetitive and full of techno-speak but eschewed admonitions and mostly returned to friendly, even fatherly, reminders about wearing masks.

“We’re still in the first wave of this pandemic,” he said. “We’re not in the second wave.”

Reporters, confined to brief inquiries via telephone, attempted in vain to elicit more clarity from Newsom about his policies, such as asking whether school children would be required to be masked when they returned to classrooms. He called it “a more complicated question than you can imagine” and said it would be answered at some indefinite point in the future.

OK, managing a pandemic is difficult, but it’s made more so when the manager’s messaging is erratic. It undermines the trust that’s central to effective crisis management — or “foundational,” to use one of Newsom’s favorite, much-repeated buzzwords.

With mask-wearing mandatory or at least encouraged in many areas to slow the spread of the virus, many Americans have taken to making DIY masks or buying low-cost ones from the store.

Gov. Gavin Newsom listens to a reporter's question as he gives an update on the state's response to the coronavirus pandemic, during a news conference in Rancho Cordova, Calif., Friday, June 26, 2020. Newsom said he wants Imperial County in Southern California to reimpose a stay-at-home order amid a surge in positive coronavirus tests. (AP Photo/Rich Pedroncelli, Pool)