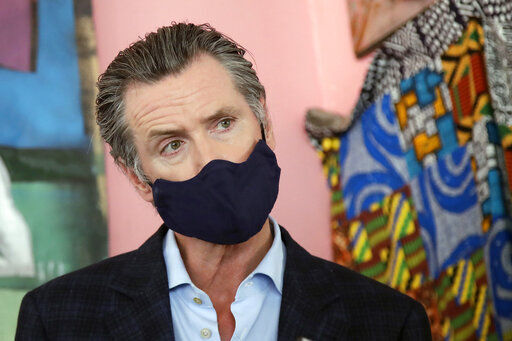 FILE - In this June 9, 2020, file photo, California Gov. Gavin Newsom wears a protective mask on his face while speaking to reporters at Miss Ollie's restaurant during the coronavirus outbreak in Oakland, Calif.

Will the third time be the charm for Gov. Gavin Newsom and his somewhat erratic efforts to battle the COVID-19 pandemic while preventing irreparable damage to the state’s once-vibrant economy?

Newsom won widespread praise for his earliest efforts at preventing spread of the sometimes fatal coronavirus six months ago, ordering widespread shutdowns of consumer businesses such as restaurants and bars. It set California apart from other states, such as New York, that were experiencing sharp spikes in infections and deaths.

Newsom issued what appeared to be tight guidelines for reopening, but as the economy slowed and hundreds of thousands — later millions — of workers lost their jobs, Newsom felt the political heat and relented, allowing many of the shuttered businesses to reopen, even though infections were still increasing.

“We have conditioned $2.5 billion in our state budget on applying the spirit and the letter of the law as it relates to health directives at the county level,” Newsom said. “If local officials are unwilling to enforce and are being dismissive, we will condition the distribution of those dollars.”

Newsom’s health advisers instituted a “monitoring list” of counties based on a bewildering series of criteria that almost no one, save themselves, understood. Newsom’s frequent telecasts on COVID-19 were supposed to explain what was being done, but they were more confusing than elucidating.

Last month, two months after the second economic crackdown, Newsom announced still another approach, claiming — as he always does — that it’s driven by scientific advice on how best to balance fighting infection and minimizing economic damage.

“We’ve learned a lot over the last number of months,” Newsom said as he unveiled a color-coded map of the state’s 58 counties, each color denoting the level of a county’s infection. He also revealed a new state contract for infection tests he said would vastly expand access.

The new system appears to be top-down and rigid, removing much of the wiggle room for local officials.

Most of the counties and most of the state’s population are in the high infection category with the most restrictive curbs on economic activities. Counties must remain in their tiers for at least three weeks and can move to less restrictive tiers only if they meet their tighter criteria for two consecutive weeks. If a county’s numbers worsen for two weeks in a row, it will be moved to a more restrictive tier.

“We’re going to be more stubborn this time,” Newsom said.

Managing a pandemic of unknown ferocity is obviously an extremely difficult task, one in which — as in war — tactical decisions can have life-and-death consequences. That said, Newsom’s record reflects a certain hubris. He pronounced each major policy as if it was delivered from on high, certain to have the desired outcome, but each was followed two months later by something sharply different.

Newsom should hope that his third managerial attempt succeeds because he’s been burning his storehouse of credibility.

Here are a few ways to save on your water bill

If you’ve noticed your water bill is higher than usual or climbing, there are a few ways you can try to decrease it! Buzz60’s Mercer Morrison …

FILE - In this June 9, 2020, file photo, California Gov. Gavin Newsom wears a protective mask on his face while speaking to reporters at Miss Ollie's restaurant during the coronavirus outbreak in Oakland, Calif.