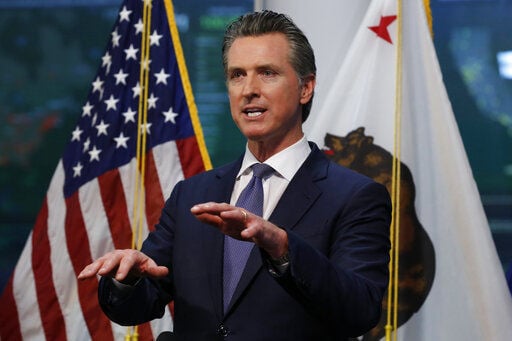 FILE - In this Monday, March 23, 2020 file photo, Gov. Gavin Newsom updates the state's response to the coronavirus at the Governor's Office of Emergency Services in Rancho Cordova, Calif. California has a $20 billion reserve but also relies heavily on capital gains, which swell the state budget when the stock market is soaring. In late March, he warned agency heads that a drop in economic activity would put their ambitions for new or expanded programs on hold. (AP Photo/Rich Pedroncelli, Pool)

Two weeks ago, however, he veered off the rails, needlessly causing alarm and confusion as Californians were adjusting to the greatest public health threat in more than a century. He, like President Donald Trump, failed to grasp that the hyperbolic rhetoric of a political campaign is not tolerable in crisis management.

Newsom’s most spectacular misstep was, in a letter to Trump asking for use of a Navy hospital ship, flatly declaring, “We project that roughly 56% of our population — 25.5 million people — will be infected with the virus over an eight week period.”

Immediately, news outlets in California and around the world amplified that huge number, and it scared the bejesus out of anyone who heard it. Buffeted by demands for an explanation, Newsom’s spokespersons acknowledged that the number was a raw estimate unadjusted for efforts to slow the spread of infection — a vital context that the letter did not contain.

Very quickly, Newsom himself appeared before cameras to announce a statewide order that Californians “shelter in place” and add the caveats that his letter sorely lacked.

“The numbers we put out today assume we’re just along for the ride, we’re not,” he said. “We want to manipulate this number down, that’s what this order is all about.”

Newsom’s second stumble involved the stay-at-home order itself. It’s a rather technical document, but Newsom’s verbal explanation of its provisions didn’t always comport with what the document said. Moreover, its list of exempted “essential” activities was lifted from a federal document pertaining to war, rather than being tailored to California and this crisis.

It left Californians confused about what they could and could not do, business owners confused about whether they should operate or must shut down and lay off their workers, and local governments uncertain whether their own orders were superseded by Newsom’s declaration.

Finally, there’s the issue of martial law — or not.

Early that week, while announcing that he might use National Guard soldiers to battle the spread of coronavirus, Newsom was asked about imposing martial law to enforce abatement orders.

Newsom replied that martial law could be used “if we feel the necessity,” adding, “I don’t want to get to the point of being alarmist, but we are scaling all of our considerations.”

A few days later, when he did activate the Guard, social media lit up with speculation that the governor was about to declare martial law, compelling administration officials to issue denials.

“We don’t want this to be scary for people,” Brian Ferguson, spokesman for the Governor’s Office of Emergency Services, said. “This is a humanitarian mission to support health and safety.”

Each of these situations could have been avoided had Newsom chosen his words more carefully. He should not have issued his 56% infection rate projection without the context he later provided, his administration should have been more specific about what the stay-at-home order meant, and he should not have even cited martial law as a contingency unless he intended to use it.

The virus itself scares and confuses people. The governor’s job is to reassure his constituents and persuade them, with precision, to do what’s necessary without adding to the fear and anxiety.

Among the coronavirus pandemic's many effects, it will alter the November election by keeping some proposals off the ballot and making approval for tax and bond measures more difficult, columnist Dan Walters says.

FILE - In this Monday, March 23, 2020 file photo, Gov. Gavin Newsom updates the state's response to the coronavirus at the Governor's Office of Emergency Services in Rancho Cordova, Calif. California has a $20 billion reserve but also relies heavily on capital gains, which swell the state budget when the stock market is soaring. In late March, he warned agency heads that a drop in economic activity would put their ambitions for new or expanded programs on hold. (AP Photo/Rich Pedroncelli, Pool)