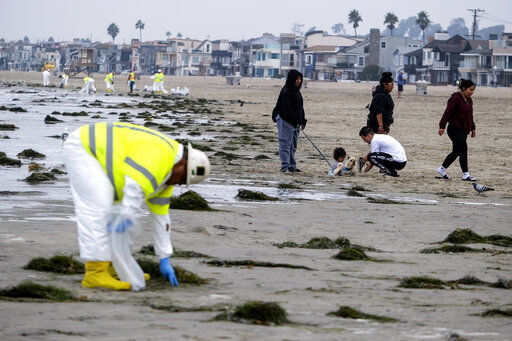 People play on the sands as workers in protective suits clean the contaminated beach after an oil spill in Newport Beach, Calif., on Thursday, Oct. 7, 2021. The Coast Guard is investigating whether a ship anchor snagged and bent the pipeline off Huntington Beach. (AP Photo/Ringo H.W. Chiu)

As if California needed another calamity, a pipeline bringing oil into Southern California from an offshore drilling platform ruptured this month, causing an ecological disaster on Orange County beaches and lagoons.

The cause of the rupture is still under investigation, but it may be the anchor of a cargo ship, dozens of which are stranded off the Southern California coast because of bottlenecks at major ports.

As efforts to minimize the oil spill’s damages continue, its political impact has been immediate, intensifying a long-standing quandary for Gov. Gavin Newsom.

While Newsom has often loudly touted California as a leader in decarbonizing its economy to battle climate change, environmental activists have been pushing him to shut down the state’s substantial oil industry.

Newsom has paid verbal homage to that goal, but has been unwilling to take more than incremental steps toward it.

The new oil spill ramped up the get-oil-out campaign and once again Newsom endorsed it in principle, saying, “As California continues to lead the nation in phasing out fossil fuels and combating the climate crisis, this incident serves as a reminder of the urgent need to usher in a cleaner and greener future that safeguards public health, the economy and our environment.”

However, he is clearly not about to substantially speed up the phase-out, telling reporters, “Banning new drilling is not complicated. … The deeper question is, how do you transition out and still respect the workforce that, by the way … are also working … on the capping of these wells.”

The latter phrase acknowledges that unionized oil industry workers are a major political impediment to shutting it down.

In fact, while California is the nation’s seventh-largest oil-producing state, we consume roughly three times as much petroleum — principally for cars and other transportation — as we produce, and import enough oil from overseas producers, mostly in the Middle East, to refine a billion-plus gallons of gasoline that we burn each month.

Newsom hopes that California motorists will eventually shift to battery-powered vehicles recharged by solar- and wind-generated electricity. But that transition is still in the embryonic stage and is decades off at a minimum.

The transition from natural gas-fired power plants to renewable sources is well underway but has hit a snag. Because the sun doesn’t always shine and the wind doesn’t always blow, wind and solar sources won’t be reliable enough to shoulder the entire load until there is sufficient storage to provide power when renewable generation is unavailable.

The most advanced storage strategy is the construction of immense banks of lithium-ion batteries, but that depends on having sufficient supplies of lithium, almost all of which is now imported from other countries.

California’s electric power supply picture is already precarious as ever-warmer temperatures hike demand for air conditioning. We flirt with shortages every summer and the state has quietly approved temporary increases in natural gas generation to bridge the gap while major power users such as hospitals and industrial plants have been installing large numbers of diesel-powered backup generators.

Finally, oil and gas do much more than power cars and electric generation. They are basic resources for countless products Californians use every day including fertilizer for agriculture, they power airliners that carry 15 million passengers each month in the state, and are basic ingredients in paving the roads on which we drive nearly a billion miles each day.

Does Newsom want to be the governor who shuts all of that down, or at least makes California’s economy even more expensively dependent on Saudi Arabia and other nations for oil? Probably not.

A flurry of legislation signed by California Gov. Gavin Newsom is an experiment in European-style social democracy, columnist Dan Walters says. Will it work?

California has a big stake in whether President Joe Biden's "human infrastructure" proposal is passed because it could affect how high-income Californians are taxed, columnist Dan Walters says.

People play on the sands as workers in protective suits clean the contaminated beach after an oil spill in Newport Beach, Calif., on Thursday, Oct. 7, 2021. The Coast Guard is investigating whether a ship anchor snagged and bent the pipeline off Huntington Beach. (AP Photo/Ringo H.W. Chiu)