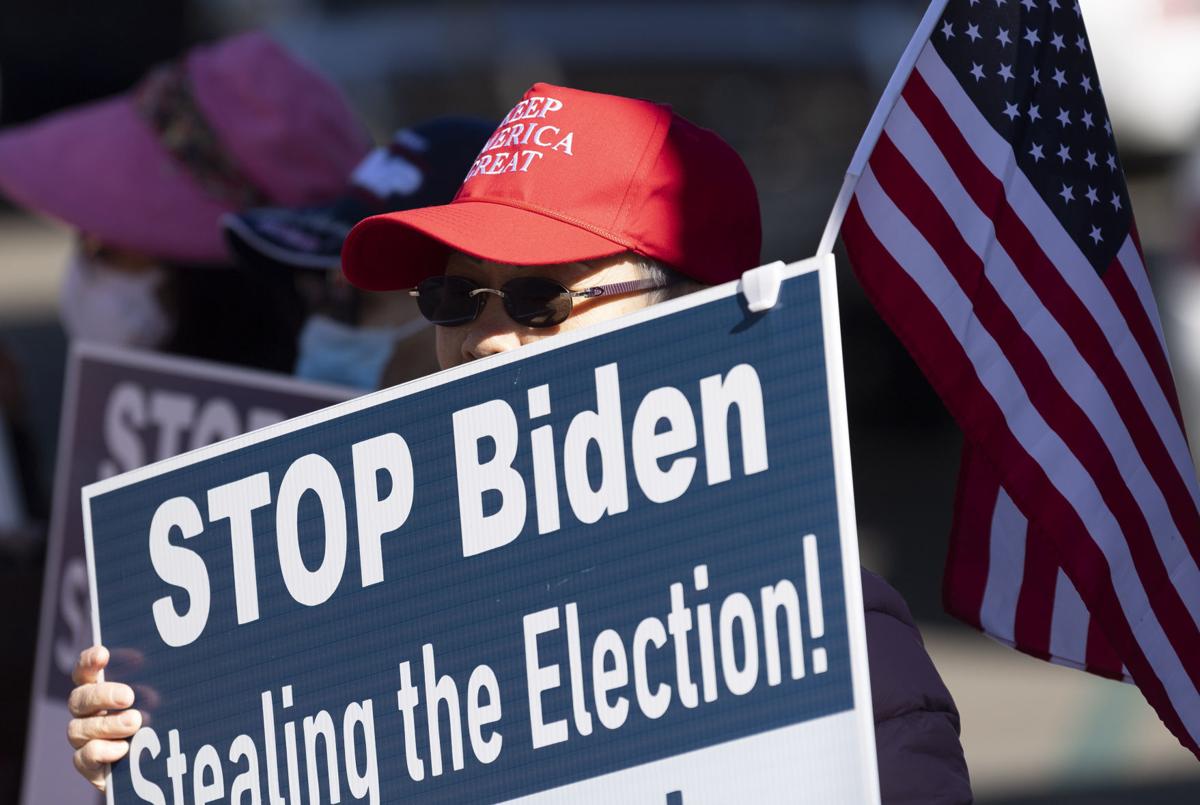 A woman participates in a pro-Trump election integrity rally at the Orange County Registrar of Voters offices in Santa Ana, Calif., on Monday.

Ronald Reagan chose Mile Square Park, in the heart of Orange County, for a Labor Day rally in 1984 to kick off his final push for a second term as president.

As large as the park is — a square mile — it was jammed with thousands of flag-waving, cheering Reagan supporters, attesting to Orange County’s status as a bastion of California Republican political strength.

Although Democrats had had some momentary success in the county a decade earlier, by 1984 virtually every local congressional, legislative and local government office was held by a Republican. It was the barb on what political junkies called the “fishhook” of GOP-voting counties that dominated statewide politics at the time.

Even as Republican power waned in the state after the turn of the century, Orange County retained a fairly strong GOP tilt — until Donald Trump came along. In 2016, for the first time in 80 years, Orange County’s voters opted for a Democratic presidential candidate, Hillary Clinton, and two years later showed their disdain for Trump again by ousting several Republican congressional members.

There was, however, more to the county’s political evolution than just dislike of Trump. Like the rest of California, Orange County had undergone a demographic change, particularly a decline in its white population — in part due to the collapse of the aerospace industry — and an increase in Asian and Latino residents. It also had become less rigid in its attitudes on social issues, such as abortion and same-sex marriages.

With Donald Trump seeking another term, this year’s election appeared to be another opportunity for Democrats to expand their Orange County presence, and in a sense they did. Orange County again voted Democratic for president and two Republican state senators, John Moorlach and Ling Ling Chang, were ousted by Democratic challengers.

However, two Democrats who had won previously Republican congressional seats in 2016, Gil Cisneros and Harley Rouda, lost them after serving just one term. And in other ways, this year’s election indicated that Orange County is still, relative to other coastal counties, fairly conservative.

Joe Biden walloped Trump by a nearly 2-to-1 landslide in California, but in Orange County, based on the unofficial returns, Biden’s margin was much narrower, just 10 percentage points.

Candidate contests at any level are only partial tests of ideological bent because personalities — such as Trump’s bombastic ways — enter into the equation. A better gauge is the vote on ballot measures in which personalities play little or no role.

With their votes on the most ideologically distinct ballot measures this year, the innate political conservatism of Orange County voters was still evident.

Proposition 15, a labor union-backed measure to increase property taxes on commercial real estate such as hotels and office buildings, failed by a few percentage points statewide, but in Orange County it lost by a 3-to-2 margin.

Proposition 16, which would have restored affirmative action in public college admissions, hiring and contracting, failed with just over 40% of the statewide vote but in Orange County, support was nearly 10 percentage points smaller.

Proposition 22, a measure backed by Uber, Lyft and other app-based transportation services to exempt their contract drivers from a new state law that would have made them employees, won by a 3-to-2 margin statewide, but the “yes” vote was 8 percentage points higher in Orange County.

Clearly, Orange County is no longer the impregnable Republican fortress it was in 1984, but neither is it as blue as Democrats have hoped. One could say that it’s purple with a stubborn streak of conservatism that sets it apart from the rest of coastal California.

Dan Walters: What will tax increase advocates do now?

California voters have rejected Proposition 15, so what will advocates of higher taxes do now?

Dan Walters: How long will Newsom have one-man rule?

California Gov. Gavin Newsom has been governing under an emergency decree for eight months but one judge says he's crossed the line by ignoring state laws, columnist Dan Walters says.

In population, Sacramento is one of California's larger cities, but it stubborly refuses to adopt a big city system of governance.

In California and elsewhere, the winners in last week's election are celebrating and the losers are engaging in rationalizations and fingerpointing, columnist Dan Walters says.

Dan Walters: California voters like Biden, unions not so much

Voters in blue California are favoring Joe Biden and other Democrats but unions are faring poorly vis-a-vis corporations.

If California Republicans have a comeback chance, it lies in popular disgust with incompetent governance, columnist Dan Walters says.

California has an unexpected and welcome revenue windfall, but it creates a dilemma on what to do with it, columnist Dan Walters says.

A woman participates in a pro-Trump election integrity rally at the Orange County Registrar of Voters offices in Santa Ana, Calif., on Monday.