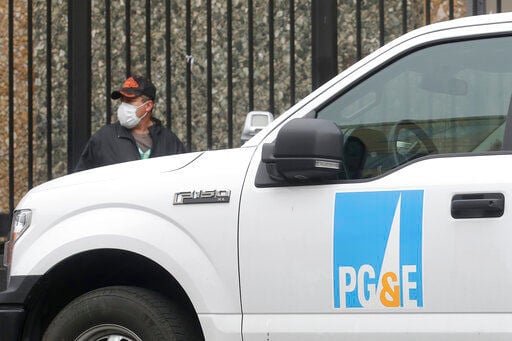 FILE - In this April 16, 2020, file photo, a man wearing a mask walks behind a Pacific Gas and Electric truck in San Francisco. Pacific Gas & Electric's proposal to pay $25.5 billion for a series of deadly Northern California wildfires ignited by its equipment faces a last-ditch effort to persuade a judge to reject the plan to get the nation's largest utility out of bankruptcy. (AP Photo/Jeff Chiu, File)

California’s largest utility, Pacific Gas and Electric, is about to emerge from bankruptcy with a depressed stock price and a very high debt load. If it cannot operate safely and profitably, a state takeover may be the option.

Were it not for the COVID-19 pandemic and the severe economic recession that followed, California’s biggest political story of the year would be the bankruptcy of Pacific Gas and Electric, the huge utility that serves most of Northern California.

A year and a half ago, PG&E declared bankruptcy due to almost countless billions of dollars in potential liability for killer wildfires caused by failures of its rural transmission lines during high winds — its second bankruptcy in two decades.

It’s now poised to emerge from bankruptcy, having settled wildfire claims with a mixture of money — borrowed money — and stock and agreed to enough managerial and operational reforms to satisfy the federal bankruptcy judge, politicians, including Gov. Gavin Newsom, and the Public Utilities Commission.

In doing so, PG&E’s executives achieved their primary goal, which was to stave off demands that it be sold to a new owner — billionaire Warren Buffet was often mentioned — or converted into some other entity, such as a co-op or a public agency.

However, corporate survival also means borrowing huge amounts of money, increasing its debt load to $38 billion, not counting more than $25 billion in wildfire payments. Emerging from bankruptcy allows it to tap a special $21 billion fund created by the Legislature for wildfire compensation.

Servicing those debts, spending heavily on upgrades to prevent future fires and otherwise reconfiguring the company will be a heavy lift, because it also must remain profitable if it is to attract the investment capital that all corporations need.

All of these expensive conditions will inevitably find their way into the power rates that PG&E’s millions of consumer and commercial customers pay — rates that are already among the nation’s highest.

Were the company to stumble again, and fail to meet the prescribed metrics, some sort of state takeover is possible, or even likely. It was being widely discussed early in PG&E’s bankruptcy and into this year, but seemed to lose steam as COVID-19 and recession became the preoccupations of politicians and the public.

However, legislation that could convert PG&E into a non-profit, publicly owned corporation called Golden State Energy is on the verge of enactment. Once it’s law, Newsom or a future governor could unilaterally trigger its creation and begin to take over PG&E’s assets, either by voluntary sale or involuntary taking.

Given PG&E’s depressed corporate status, such a takeover might be relatively cheap. With its stock hovering around $9 share, it’s market value is scarcely $5 billion, one seventh of what it was three years ago. However, acquisition would also mean assuming the company’s huge debt load.

Could it happen? Yes. Should it happen? Perhaps, if PG&E cannot successfully operate as an investor-owned utility. But having such a huge utility under the control of politicians is a bit scary. Think Department of Motor Vehicles or the Employment Development Department, two current examples of governmental mismanagement.

Speaking of which, at some point the role that the Public Utilities Commission played in PG&E’s debacle should be fully examined.

The PUC, whose members are all appointees of the governor, is supposed to ensure that the regulated monopolies it oversees are serving their customers efficiently and profitably. If PG&E was neglecting the maintenance of its grid, allowing it to deteriorate and cause wildfires, where was the PUC? It should have been aware of the neglect and insisted that PG&E’s executives do the right thing.

Golden State Energy, if it becomes reality, would also be under PUC regulation — something to keep in mind if that option arises.

FILE - In this April 16, 2020, file photo, a man wearing a mask walks behind a Pacific Gas and Electric truck in San Francisco. Pacific Gas & Electric's proposal to pay $25.5 billion for a series of deadly Northern California wildfires ignited by its equipment faces a last-ditch effort to persuade a judge to reject the plan to get the nation's largest utility out of bankruptcy. (AP Photo/Jeff Chiu, File)