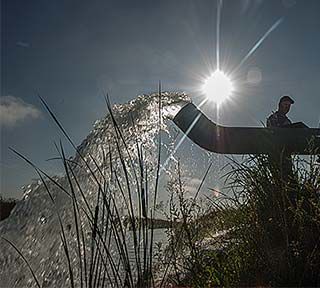 California’s perpetual, uber-complex conflict over water progresses much like the tectonic plates that grind against one another beneath its surface.

Periodically, as subterranean friction increases, there’s a sudden movement that we call an earthquake — sometimes imperceptibly small, but occasionally large enough to disrupt and endanger life at the surface.

Dan Walters: Can a new agency crack the housing nut?

Despite high levels of political, civic and business support for a new regional housing agency, how it would contend with the reluctance of many smaller suburban enclaves to accept high-density and/or high-rise rental housing is unclear.

In much the same way, interest groups constantly rub on each other in political and legal venues, seeking greater shares of the state’s water supply, which itself varies greatly from year to year. And occasionally, there’s a sharp movement that shakes things up.

We may be seeing just such a movement involving the nation’s largest agricultural water agency, the Westlands Water District that serves the western side of the San Joaquin Valley.

Westlands was too late to California’s water game to nail down classic water rights. It has operated for nearly 60 years on a series of temporary supply contracts with the federal government’s Central Valley Project.

At some point, California’s “resistance” to President Donald Trump would move beyond flowery rhetoric, tweets and lawsuits and seriously affect Californians.

Meanwhile, it used its political clout and its money to seek more permanent allocations of water and/or increase overall supplies through construction of new storage and conveyance facilities.

That put it in conflict with environmental groups that have long sought to reduce agricultural diversions from the Sacramento-San Joaquin Delta. Both federal and state water projects draw water from the Delta for shipment southward to San Joaquin Valley farmers and Southern California cities.

Three years ago, Westlands lawyer and lobbyist David Bernhardt helped draft and win congressional passage of a new law allowing federal water contractors such as Westlands to receive permanent contracts from the Bureau of Reclamation. In return, the contractors would pay what they are deemed to owe for construction of dams and canals that supply the water, in Westlands’ case $320 million.

Bernhardt is now President Donald Trump’s Department of Interior secretary. Recently, its Bureau of Reclamation announced that Westlands would be awarded the first contract under the new law, potentially providing more than a million acre-feet a year, or enough to supply 2 million families.

Given their druthers, many government officials would prefer to do their business – our business, actually – behind closed doors and provide sanitized, self-serving versions of their actions after the fact.

Simultaneously, Westlands announced that it was withdrawing its long-standing support for a project to raise Shasta Dam to increase the capacity of Shasta Lake, California’s largest man-made reservoir. It previously dropped its support for tunneling beneath the Delta to improve water deliveries southward.

In effect, therefore, the huge water district appears to be swapping two of its water-supply maneuvers for the new federal contract, thereby changing the political dynamics.

The Shasta project now appears to be dead and the tunnel project — shrunken by Gov. Gavin Newsom from two tubes to one — is gasping for life.

The state’s water conflict now will focus on not only the Westlands supply contract but also on others that smaller federal contractors will seek under the 2016 law that Bernhardt’s law firm fostered.

Environmental groups despise that law and the contracts it will spawn. The organizations see the agreements as commitments that would thwart efforts to reduce draws from the Delta via lawsuits, decrees from the state Water Resources Control Board and so-called voluntary agreements with agricultural water agencies.

The question is whether the critics can scuttle the contracts through political or legal maneuvering.

It could be a race against the calendar. Trump’s first term as president has scarcely a year to go. Were a Democrat to defeat him next year with the contracts still pending or held up in the courts, everything might revert — particularly if Democrats also retain control of the House and win the Senate.

For now, however, California’s waterscape is still shaking.

It is – or should be – obvious that a government official should not have a personal financial stake in his or her decisions.