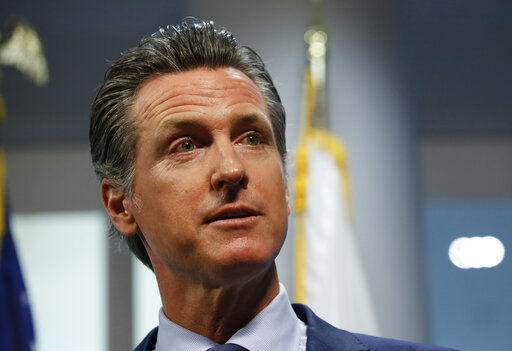 FILE - In this April 12, 2019, file photo, California Gov. Gavin Newsom answers a reporter's question about a report he presented concerning the worsening wildfires in the state, during a news conference, in Rancho Cordova, Calif.  (AP Photo/Rich Pedroncelli, File)

FILE - In this April 12, 2019, file photo, California Gov. Gavin Newsom answers a reporter's question about a report he presented concerning the worsening wildfires in the state, during a news conference, in Rancho Cordova, Calif.  (AP Photo/Rich Pedroncelli, File)

Gov. Gavin Newsom says he wants Pacific Gas & Electric Co. to become a “radically restructured and transformed utility that is responsible and accountable…”

Newsom, in rejecting the company’s plan to emerge from bankruptcy earlier this month, once again denounced it for “more than two decades of mismanagement, misconduct, and failed efforts to improve its safety culture.”

“PG&E’s recent management of the public safety power shutoffs did not restore public confidence,” he wrote. “For too long, PG&E has been mismanaged, failed to make adequate investments in fire safety and fire prevention, and neglected critical infrastructure.”

The governor demands more direct control over PG&E’s management, including a new slate of directors, mostly Californians, subject to his administration’s approval, and a provision that its operating license be transferred “to the state or a third-party when circumstances warrant.”

Thus, Newsom seems to be edging toward the notion, championed by San Jose Mayor Sam Liccardo and other political figures, of converting what is now a state-regulated, investor-owned monopoly into some sort of governmental entity.

There’s precedent for that in California. Quite a few of its cities already operate electric power services; some rural irrigation districts are also power providers, and the Sacramento Municipal Utility District was created in the 1930s to supplant PG&E in Sacramento County.

However, the state is already somewhat complicit in PG&E’s fall from grace. A misbegotten, misnamed “deregulation” of the state’s utilities, decreed in 1996 by the Legislature and then-Gov. Pete Wilson, compounded by successor Gray Davis’ mismanagement of the subsequent energy crisis, led to PG&E’s first bankruptcy and the near-insolvency of other utilities.

It had scarcely emerged from that bankruptcy when the Legislature and governors Arnold Schwarzenegger and Jerry Brown began demanding that utilities phase out carbon-based power generation in favor of “renewables” to fight climate change.

Yes, PG&E neglected the maintenance of its transmission grid and that, tragically, led to destructive and deadly wildfires when strong winds downed high-voltage lines. And facing many billions of dollars in claims from wildfire victims, it once again declared bankruptcy.

But where was the Public Utilities Commission, whose members are appointed by the governor, when this was happening?

The PUC is charged with regulating utilities’ rates, making sure that they are providing safe and reliable service, and protecting their profitability so that they can attract investment and borrow money.

One must wonder whether political pressure to shut down nuclear and fossil fuel plants and buy expensive wind and solar power while keeping customers’ power bills from skyrocketing contributed to the neglect of maintenance.

So what happens now?

The careers of political executives – presidents, governors and big city mayors – are often, fairly or not, defined by how they deal with the crises they encounter.

Newsom could have his say on PG&E’s plan to emerge from bankruptcy because of legislation that gives it access to special bond financing to compensate wildfire victims only on condition that it satisfies state-set conditions.

A settlement with wildfire victims, announced earlier in the month, makes them supporters of PG&E’s restructuring plan. PG&E shareholders, most of the big institutional investors, are also on board.

Indirectly, Newsom’s rejection letter to PG&E’s top executive, Bill Johnson, allies the governor with a rival financial stakeholder group, the utility’s lenders, who want to take over its management.

Newsom must become less implicit and more explicit. If he wants a state takeover of the nation’s largest investor-owned utility, he should say so and take responsibility for what happens.

Simply imposing more political micromanagement on an investor-owned corporation would make accountability to ratepayers, shareholders and lenders — not to mention its financial viability — even cloudier.

California’s two major electric power utilities are on the hot seat as Capitol politicians ponder whether they should be protected from the financial consequences of last month’s killer wildfires.