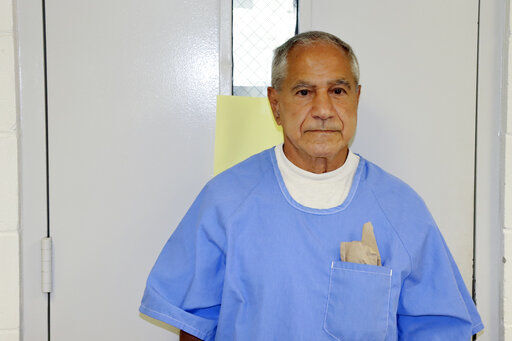 In this image provided by the California Department of Corrections and Rehabilitation, Sirhan Sirhan arrives for a parole hearing Friday, Aug. 27, 2021, in San Diego. Sirhan faces his 16th parole hearing Friday for fatally shooting U.S. Sen. Robert F. Kennedy in 1968. (California Department of Corrections and Rehabilitation via AP)

Gavin Newsom was just a toddler in 1968 when Robert Kennedy won California’s June 5 presidential primary, addressed his cheering supporters in Los Angeles’ Ambassador Hotel and then was murdered as he walked through the hotel’s kitchen en route to a private celebration.

Fifty-three years later and now California’s governor, Newsom may decide whether Kennedy’s murderer, Sirhan Sirhan, will be released from prison on parole. A two-member state parole board panel last week recommended Sirhan’s release, but ultimately the governor has the power to allow or block parole.

It would be both a personal decision and a political one. Newsom counts Kennedy as a personal hero and has his portrait on the wall of his office. However, he also considers himself to be a criminal justice reformer who has declared a moratorium on executions and has sanctioned parole for some vicious killers.

Earlier this month. Newsom refused to block the parole of David Weidert, who buried a developmentally disabled man alive and had spent four decades in prison. Although Newsom had blocked other paroles, the Weidert case drew sharp criticism, particularly from those who are asking voters to short-circuit Newsom’s governorship via a recall election.

Previous governors rejected Sirhan’s earlier bids for parole from his life sentence for firing a .22 bullet into the back of Kennedy’s head. Sirhan had originally been sentenced to die for the assassination but in 1972, during one of the state’s periodic bans on capital punishment, his sentence was commuted to life imprisonment.

Newsom may be conflicted about Sirhan’s fate, but he’s not alone. Two of Kennedy’s nine surviving children, including Robert Kennedy Jr., supported the parole. But six others vehemently oppose Sirhan’s release.

“While nobody can speak definitively on behalf of my father, I firmly believe that based on his own consuming commitment to fairness and justice, that he would strongly encourage this board to release Mr. Sirhan because of Sirhan’s impressive record of rehabilitation,” Kennedy Jr. wrote in a letter to the parole board.

Kennedy Jr., best known in California as a vocal opponent of vaccination, has also speculated that Sirhan is innocent and that his father was killed by someone else. Sirhan, however, has admitted his guilt, saying that he shot Kennedy as retribution for the treatment of his fellow Palestinians, and evidence clearly proved that Sirhan is guilty.

The six other Kennedy offspring are adamant that Sirhan should remain behind bars and are asking Newsom to block parole.

“Our father’s death is a very difficult matter for us to discuss publicly and for the past many decades we have declined to engage directly in the parole process,” they said in a statement after the parole board decision, adding that they are “shocked by a ruling” (that) and “has inflicted enormous additional pain.”

“We urge the Parole Board staff, the full board and ultimately … Newsom, to reverse this initial recommendation,” the statement continued. “It is a recommendation we intend to challenge every step of the way, and we hope that those who also hold the memory of our father in their hearts will stand with us.”

The parole recommendation would reach Newsom only after going through all of the parole board’s procedural hoops, which means it would be after the September 14 recall election and should the recall succeed, it could be decided by Newsom’s successor.

However, Newsom will be pressed to declare his position sooner rather than later. It’s another factor in the already dense melange of issues enveloping Newsom as he fights to hold onto his job.

Dan Walters: If recalled, what’s next for Gavin Newsom?

How would California Gov. Gavin Newsom continue to pursue a political career if he's recalled from office this year, columnist Dan Walters asks?

Dan Walters: Who will control sports betting in California?

Legal wagering on sports is coming to California but dueling ballot measures will determine who controls and profits from the potentially huge amounts of money involved, columnist Dan Walters says.

Dan Walters: California’s gig worker fight is back in the courts

California's epic battle over the status of gig workers has entered a new phase with a judge overturning Proposition 22, a 2020 ballot measure sponsored by Uber and other transportation and delivery companies, columnist Dan Walters says.

Dan Walters: Larry Elder’s critics may be helping him succeed

Gov. Gavin Newsom turned back a recall drive with a landslide of supportive votes. Columnist Dan Walters asks: So what now?

In this image provided by the California Department of Corrections and Rehabilitation, Sirhan Sirhan arrives for a parole hearing Friday, Aug. 27, 2021, in San Diego. Sirhan faces his 16th parole hearing Friday for fatally shooting U.S. Sen. Robert F. Kennedy in 1968. (California Department of Corrections and Rehabilitation via AP)