One of the more notable features of the stay-at-home era is a sudden interest in baking. Specifically, baking from sourdough starters.

Seems that people have plenty of time on their hands but are finding commercial yeast hard to come by in stores. Why not just harvest the wild yeast from the air around us?

Our own Jennifer Huffman wrote about the craze locally this week (“Napans go crazy for baking sourdough bread,“ May 20), but it’s been all the talk of media and social media for at least six weeks.

From the editor: Cooking is a labor of love

Even in a foodie-oriented place like Napa County, people always seem surprised when I say I like to cook.

“I Baked Sourdough Bread From a Viral Tweet and It Didn’t Kill Me,” writer Ryan F. Mandelbaum for the hip culture site Lifehacker wrote on April 27.

A search on Twitter this week revealed hundreds, thousands, of recent posts related to sourdough, showing starters in various stages of development and sharing recipes (“Sourdough Cinnamon Rolls with Cream Cheese Icing,” anyone?).

Instagram is in on the act too, with more than 3 million posts under #sourdough.

In other words, sourdough is hot.

A taste of home

Of all the things my mother left behind upon her death last year, the most interesting to me is her recipe file.

Funny thing is, I’ve been on the sourdough team for nearly 20 years. My wife gave me a cookbook years ago by LA restaurateur Nancy Silverton that included detailed instructions on creating and maintaining your own starter, along with a variety of recipes for using it.

Being an avid home cook, I decided to try, and after a slow 14-day waiting period, I had a pale tan mush bubbling away from the yeast floating around in the air over the LA neighborhood of Los Feliz. The yeast colony has traveled with me to Philadelphia and the Napa Valley, presumably picking up new yeast friends along the way.

Turns out yeast is all around us – if you’ve heard of “spontaneous fermentation” in wine or beer making, that’s what they’re talking about: waiting for the natural yeast from the air or on the ingredients to take hold of the sugary juice to create alcohol. In fact, we’re in an unusually good position for wild yeasts since grapes are an ideal vehicle for carrying them. Silverton herself recommends adding a bunch of organic grapes to the mix to boost the airborne yeast in the early few days of creating a new starter colony.

If you’re even a slightly experienced bread baker, sourdough isn’t all that hard to work with. You just need to remember that it isn’t quite as robust as its domesticated yeast cousins. A long, slow proof overnight is often necessary before baking, making it a two-day venture.

How it looked back then

A happy ending has a way of buffing the edges off of painful earlier memories, editor Sean Scully

Also, it is vitally important to avoid allowing any commercial yeast anywhere close to your precious wild version – the commercial stuff can quickly outcompete their wild cousins and turn your starter into a big container of Fleischmann’ or Red Star yeast. I don’t ever bake with sourdough and commercial yeast on the same day to avoid contamination.

The biggest thing to know about sourdough baking, however, is that creating a starter is somewhat like adopting a pet. It must be fed regularly, preferably daily, and given fresh water. If you don’t care for your starter, it can suffer a bacterial infection, turning from a creamy tan goo to an alarming pink watery puddle.

This is particularly true in hot weather, so I often send my starter on an extended vacation in the refrigerator for the hottest part of the summer. In the dark, quiet back of the fridge, the yeast covers itself with a gray-ish pool of protective alcohol and settles in for a nap. It can last months in hibernation and be ready to bake again after just a day or two of feeding at the other side.

The only really hard part about having a starter colony is letting go.

A scary time for businesses of all types

We're all worried about the fate of our businesses, Editor Sean Scully says.

Because you feed it every day, the yeast reproduces—profligately. The ideal schedule is to feed it enough flour and water every day to produce enough extra starter to make one batch of bread the next day (in my case, two loaves). But who can bake and eat two loaves every single day?

Therefore, you have be willing to discard the excess on the majority of days when you don’t bake, a heartbreaking end to your beloved yeast. But if you give into sentiment and try to save the leftovers, you’ll soon be awash in starter, so much you’d need a tanker truck or two to store it.

If you like to bake, or just want to learn, I certainly encourage you to take a stab at sourdough. Making your own starter is fun, but if you want a shortcut, find a friend or neighbor with an existing colony – they will have plenty to share to a good home.

Just remember that you’re adopting a living, breathing thing. And like adopting a pet or caring for a child, that long-term responsibility is not always for the faint of heart.

Your ideas and suggestions are welcome

Your ideas and suggestions will help us shape the coverage we do as this unprecedented emergency drags on, editor Sean Scully says.

The sun on my face

Journalism is more important than ever, but like many industries, it is facing a severe financial threat, Editor Sean Scully says.

When your world contracts

Getting to know the neighbors

Working from home has given Editor Sean Scully a rare chance to watch the doings in his back yard.

From the editor: No parades equals no summer

Time to talk letters to the editor again

Editor Sean Scully discusses the whys and wherefores of the way we handle letters to the editor. 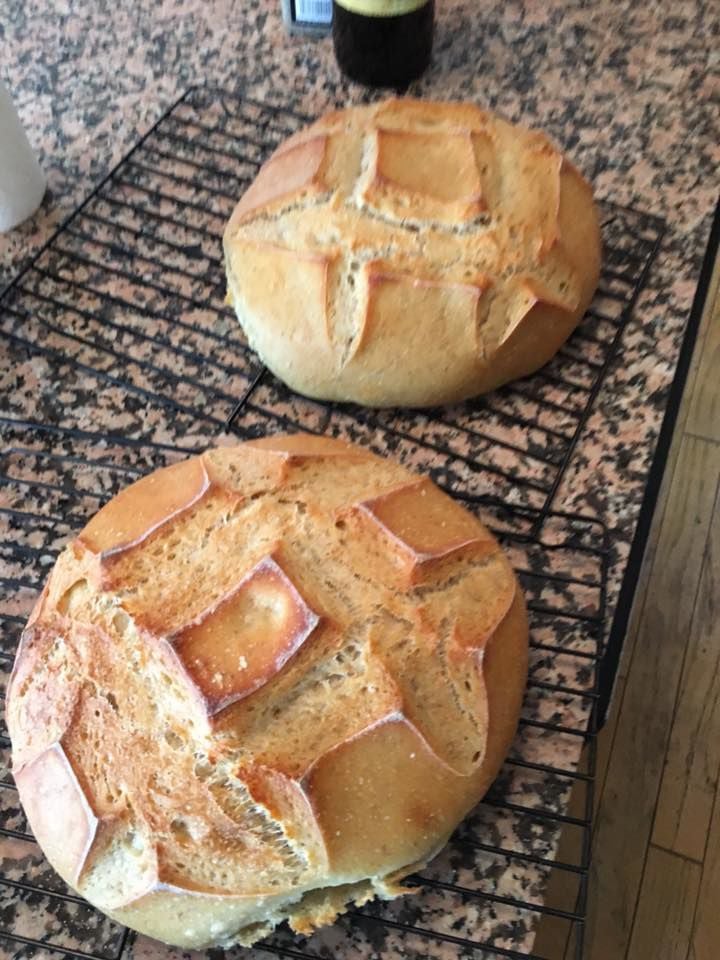 A 2016 batch of sourdough in the kitchen of Editor Sean Scully.