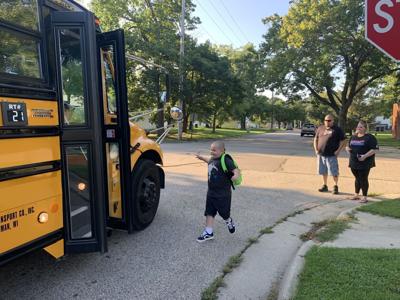 Geske, a former state Supreme Court justice, introduces herself as one of the Wisconsin State Journal's new community editorial board members

But what about all the people and priorities that weren't on the ballot? Who really won and lost beyond the candidates themselves?

A relatively smooth election with decent turnout -- 57% across the state, 65% in Dane County -- led to clear results and gracious concession speeches. Other than a man arrested with a knife at a West Bend polling place, fears of disruptions and intimidation didn't emerge. It was a nice return to democratic norms following Donald Trump's endless conspiracy theories, frivolous lawsuits and the Jan. 6 riot denying his 2020 presidential loss.

Overseeing Tuesday's vote was the politically balanced state Elections Commission that has weathered trumped-up and unfair accusations since Trump failed to concede his loss two years ago. The Republican candidates for governor and attorney general, Tim Michels and Eric Toney, respectively, suggested the commission should be disbanded and possibly charged with crimes. Both Michels and Toney lost. We hope Michels' plan for single-party control over election administration died with his campaign.

Gov. Tony Evers' signature issue has always been public schools. The former state schools superintendent wants to steer $2 billion of the state's $5 billion surplus to K-12 education in the next two-year state budget. He'll be able to veto attempts by the Republican-run Legislature to divert public dollars to private and religious schools -- something Michels had championed. At least 61 of 81 school referendums on Tuesday's ballot passed, according to the state Department of Public Instruction, showing significant support for greater investment.

With the demise of Roe v. Wade in June, Wisconsin's 1849 ban on most abortions appears enforceable again. Michels endorsed the ancient and strict law -- approved before women could even vote -- then tried to moderate his position. The issue undoubtedly encouraged more young people to cast ballot in the midterms, and it seemed to cost Michels votes in Milwaukee's suburbs. Assembly Speaker Robin Vos, R-Rochester, was already talking about adding exceptions to the law last week. Kaul's lawsuit also will continue, contending the 1849 ban is unenforceable.

Wisconsin is still a purple state with a healthy independent streak that favors moderation. Tens of thousands of voters split their ballots Tuesday, rather than supporting the candidates of only one party. For statewide offices, Democrats won three races, while Republicans carried two. Maybe we aren't as tribal as we thought?

The longest-serving Assembly speaker won another term, having narrowly dispatched a Trump-endorsed election denier in the GOP primary for his Racine County seat. Trump went after Vos again in the general election with a robocall on behalf of Vos' Republican opponent, who continued his haphazard bid to unseat Vos with a write-in campaign. Vos didn't win the Assembly supermajority he yearned for to override the governor's vetoes. But he remains the top Republican voice for the GOP in Wisconsin. Johnson won a third term in Washington but has far less say over state policy. Showing his confidence after the votes were counted, Vos called on his party to move past Trump. That's the best idea he's had in a long time.

The only reason Vos and his GOP colleagues could even dream of supermajorities was because they had redrawn voting districts in 2021 to their party's advantage, enhancing previous gerrymandering from a decade ago. They reshaped legislative districts using sophisticated software and historical voting data, expanding their majorities to nearly two-thirds of the Legislature on Tuesday. That's an absurd result for a state that was otherwise so evenly split. Fair maps would thin Vos' numbers. The only way that might happen in the coming years is if a new justice is elected to the state Supreme Court in the spring who views gerrymandering as unconstitutional.

Many of the former president's hand-picked, election-denying candidates lost, including in key U.S. Senate races. That means the Democrats could maintain control of the upper house on Capitol Hill. Johnson, a Trump loyalist, won in Wisconsin. But it was only by a single percentage point in a midterm scenario that historically Republicans would have dominated. Democrats held their own despite an unpopular president and stubborn inflation. Now an increasing number of Republicans are blaming Trump for their losses and calling for him to let others run for president in 2024.

Much of the messaging this election cycle came from anonymous voices spending tens of millions of dollars on misleading attack ads that turned off most of the public. Transparency laws are needed so the special interests and wealthy individuals who pay for obnoxious ads have to stand by what they say, rather than secretly trying to influence elections without accountability.

The far-left movement to cut resources from law enforcement continues to burden major Democrats who have flirted with the cause in the past. Johnson and his Republican backers hammered his Democratic opponent, Lt. Gov. Mandela Barnes, for defending calls to defund police in a video that was played over and over again in negative ads. Barnes failed to offer an explanation for the video when given the chance. The issue undoubtedly cost him votes in his hometown of Milwaukee, where violent crime and reckless driving has surged. He collected 40,000 fewer votes in Milwaukee than U.S. Sen. Tammy Baldwin -- a Democrat from Madison -- did there four years ago.

The Democratic Party talks a good game about letting people vote and have their say in elections. But just two weeks before their U.S. Senate primary in August, party strategists pressured Barnes' top challengers to drop out. Presumably, the goal was to save campaign money for the general election. But choosing the nominee for voters -- rather than letting voters decide for themselves -- didn't work. Barnes often seemed untested at defending his record and lost a close race against the most vulnerable GOP Senate incumbent in the country.

OUR VIEW: Trump era must end, but only GOP can do it

OUR VIEW: A clean break is needed, not timid hedging that hopes he’ll go away on his own

Hugs, a humming economy and help from neighbors should make Wisconsin thankful

OUR VIEW: It's great to be back doing what we love

Geske, a former state Supreme Court justice, introduces herself as one of the Wisconsin State Journal's new community editorial board members

Schmitz, the Downtown Madison dynamo whose great-grandfather opened a store on the Capitol Square in 1898, introduces herself as one of the Wi…