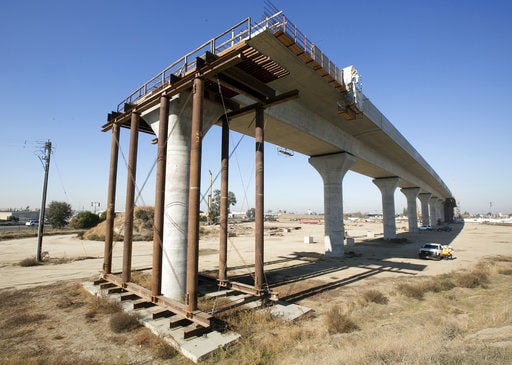 FILE -- In this Wednesday, Dec. 6, 2017 file photo, is one of the elevated sections of the high-speed rail under construction in Fresno, Calif. (AP Photo/Rich Pedroncelli, file)

By the beginning of next year, California will have a new governor and perhaps a new perspective on its largest building project of this and the next decade – the fractionally-built and ultra-controversial bullet train now under construction in Madera and Fresno counties.

A new governor can mean a new board of directors for the High Speed Rail Authority and a new outlook on the current management’s biggest error – its insistence on routing the new train through the most populated parts of the Central Valley rather than along the much more open route of Interstate 5 on that valley’s western edge.

It’s not often that a state agency can reverse course, give up on a mistake and still give Californians something they would need and use. But this is such an opportunity.

There are many reasons the bullet train project, whose almost $10 billion in state bonding authority was OK’d at the polls 10 years ago, has lost much of its support, with fewer than half the voters polled early this year supporting its continuance.

But a need for fast ground transportation between Northern and Southern California remains. Anyone who has fought traffic at the main airports of the Los Angeles and San Francisco areas knows congestion there grows steadily, making flying far more difficult than it was a few years ago.

The obvious solution from the beginning was to route high-speed trains along the state’s most traveled and shortest north-south route, Interstate 5. That route has very wide medians for much of the distance between Grapevine at the northern foot of the Tehachapi Mountains and either the California 152 highway west over Pacheco Pass to Gilroy and the Silicon Valley or the Altamont Pass east of Livermore and the East Bay suburbs of San Francisco.

But High Speed Rail Authority members appointed first by ex-Gov. Arnold Schwarzenegger and later by current, but outgoing, Gov. Jerry Brown wouldn’t hear of this. Instead, they opted to send the bullet train through Bakersfield, Fresno, Madera and Merced before heading it west along the 152.

That choice spurred myriad lawsuits from farmers and other landowners whose livelihoods could be disrupted by the train’s tracks and viaducts. It led to fierce opposition from San Joaquin Valley Republicans in Congress backing their supporters in agriculture.

It has caused delays of half a decade or so in the project’s predicted completion date and contributes heavily to cost overruns forecast to double the original $35 billion cost estimate. This forecast comes from the rail authority’s own latest business plan, which also has cut expected speeds far below the originally promised 220 mph for much of the current route.

Imagine how many more lawsuits, delays and cost overruns the bullet train will encounter when and if construction reaches the San Francisco Peninsula, where Silicon Valley’s massive wealth could be arrayed against it.

There’s also the issue of whether intermediate stops in cities like Fresno and Merced are worth having. The experience of Europe’s Paris-to-Amsterdam Thalys bullet train is instructive here. That line stops at major cities like Brussels and Rotterdam, but almost no one enters or exits there. Almost all riders stay aboard for the full run.

If stops in much larger cities are barely used during a European run of almost the same distance as Los Angeles to San Francisco, why believe many will use stations in the smaller California cities?

The latest official cost and speed estimates for the California train have plainly put this project in peril. There’s a strong risk the bridges and viaducts already built will someday be monuments to a huge failure.

Better to abandon them now, before investing billions of dollars in even more prospective white elephants, and switch to a far saner, cheaper and less disruptive route up I-5 and over the Altamont Pass to Livermore, where passengers could easily switch to new high-speed Bay Area Rapid Transit trains for the rest of the ride into San Francisco.

The time and money saved would be phenomenal, even if some politicians and their appointees would lose face in the process.

Imagine for a moment that California now had a top four primary election system instead of the top two it now uses.

Thomas D. Elias: How about incentives in bullet train contracts?

Back in 2007, when then-Gov. Arnold Schwarzenegger desperately cast about for ways to cut the deficit-ridden state budget, he suddenly slashed…

Light rail doing fine; not so for bigger trains

A little more than one month from now, the Metro Expo Line’s final portion will open for business, making it possible to take trains from the …

Many of America’s worst traffic bottlenecks are holding up commuters for hours each week even where there’s plenty of mass transit nearby.

Thomas D. Elias: This bill is an absolute no-brainer

Only occasionally does a proposed California law approach the status of being an absolute no-brainer.

Thomas D. Elias: Bet on it: Californians won’t willingly give up cars

Since the early 1970s time of ex-Gov. Jerry Brown’s first term in office, California officials from the top down have tried to coax Californians out of their cars.

The longtime north-south animosity shows signs of bleeding over into politics. Northern California politicians are avidly pushing supposed solutions to the state’s acknowledged housing crisis against the wishes of many Southern California cities.

FILE -- In this Wednesday, Dec. 6, 2017 file photo, is one of the elevated sections of the high-speed rail under construction in Fresno, Calif. (AP Photo/Rich Pedroncelli, file)