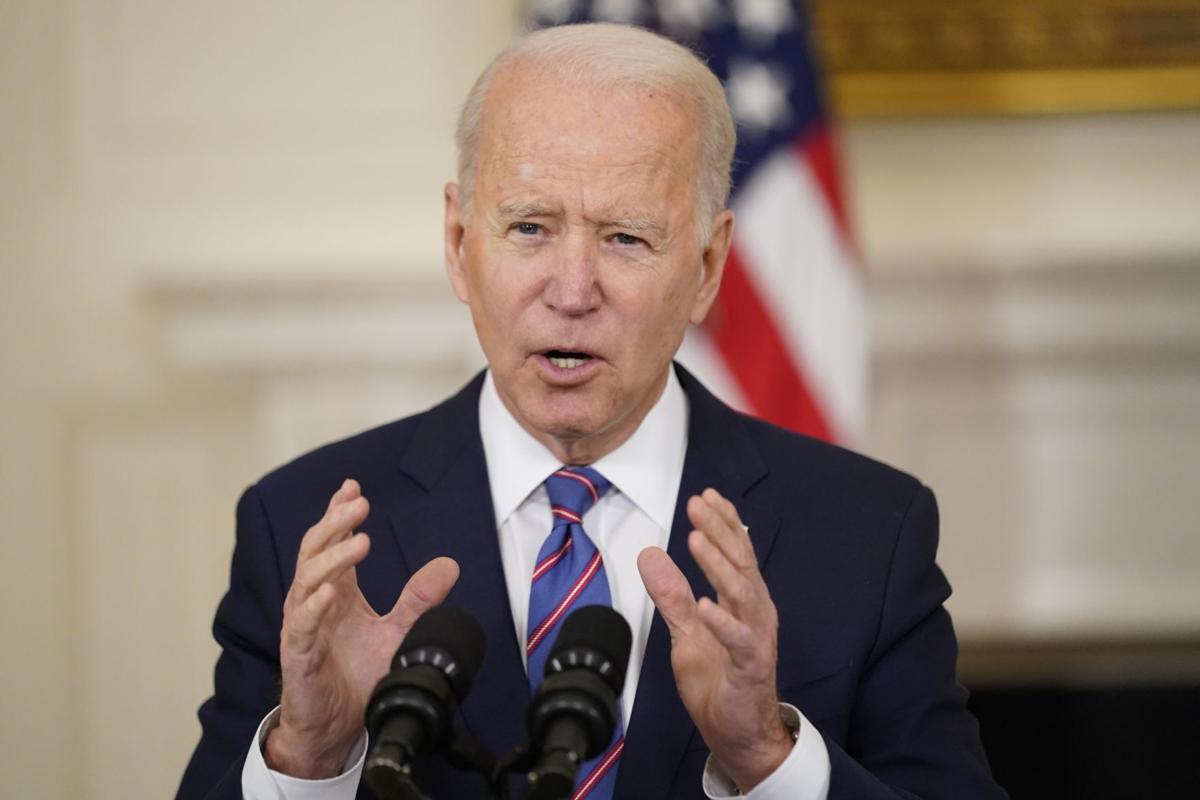 President Joe Biden speaks about the March jobs report Friday in the State Dining Room of the White House.

California spent most of the last four years as a target, the object of continual presidential resentment from Donald Trump because he lost here in 2016 by almost a 62-38 margin, the state’s differential providing all 3 million votes by which Hillary Clinton defeated him in the popular vote that fall.

But with the end of successor Joseph Biden’s first 100 days in office drawing near, things look very different for California today.

First, a look back at California’s background with Trump.

The popular vote numbers against Trump were somewhat higher last fall than in 2016, but the percentage was virtually the same, this time slightly more than 64-34 percent, suggesting few minds changed over four years.

Trump took out his resentment in myriad ways, refusing to come here for almost anything but visits to his vaunted border wall and a couple of fundraising dinners. More substantially, his presidency meant less money for California schools than before, and less funding for police, highways, parks, and almost anything else the federal government helps pay for.

When it came to new federal projects and climate change measures, forget about it. As for top appointments, almost no one from California except big donors to Trump campaigns got any. The big exception was Stephen Miller, the only close advisor who was not family that lasted the length of Trump’s term.

Miller, a Santa Monica High School graduate whose family suffered financial losses during his youth that forced a move from the most affluent part of his hometown to a lesser area, became the ideologue behind Trump’s extreme hard-line policies on immigration.

With Biden’s accession — something Trump fought to stop right up to inauguration day — things quickly turned around for California.

Start with the vaccination program against the COVID-19 plague. Under Trump, there was virtually no program. Some health care workers managed to get inoculated before Biden took over, but there were no mass vaccination sites, small supplies for hospitals and health systems, and tiny numbers of people getting the shots.

Within less than a month after Biden’s arrival, California had dozens of large-scale vaccine centers, and six weeks into his term, about one-third of Californians (13.5 million) had been jabbed. There was some confusion, but except for weather-caused shipping problems, there have been no supply shortages or vaccination stoppages. With the advent of the one-shot Johnson & Johnson version of the vaccine, the rollout gained speed and hurtled toward herd immunity, slowed only by a chemical mixup in one J&J plant in Baltimore.

Biden aimed for 100 million vaccinations in his first 100 days, but the campaign far exceeded what at first seemed an impossible goal.

California also ceased to be the center of resistance to federal policy, that role shifting to states like Texas and Arizona, run by conservative Republicans.

Instead, Californians — none part of the Biden family — moved into one top policy-making role after another. UC Berkeley Prof. Janet Yellen became Treasury secretary, state Attorney General Xavier Becerra became head of Health and Human Services, former Michigan Gov. Jennifer Granholm — a Berkeley professor most of the time since she left office in 2011 — is Energy secretary. Many more Californians got sub-cabinet jobs.

For California, this means treatment as a most-favored state rather than the least favored. It means California Democratic Sen. Dianne Feinstein’s new bill to permanently ban offshore oil drilling along the West Coast — a direct descendant of the anti-drilling movement that began with the Santa Barbara oil spill of 1968 — stands a good chance.

Plus, Biden ordered a moratorium for new oil drilling from federal land and waters within less than a week of taking office.

Biden’s arrival also means the million or so Dreamers whose status under the Deferred Action for Childhood Arrivals (DACA) program established by ex-President Barack Obama and targeted by Trump, now breathe easier. Immigration raids and deportations of the undocumented, some of whom have lived and worked here for decades, are much reduced and targeted more to known criminals than others.

For California, then, Biden has meant the last election had consequences that figure to increase every day.

President Joe Biden speaks about the March jobs report Friday in the State Dining Room of the White House.