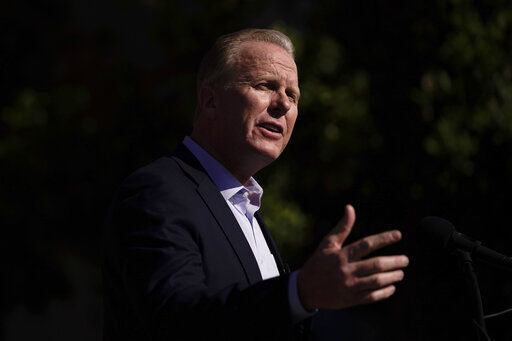 FILE - In this Feb. 2, 2021 file photo former San Diego Mayor Kevin Faulconer speaks during a news conference in the San Pedro section of Los Angeles. Faulconer announced he is entering the race for California governor, the first major Republican to formally step into the contest while a potential recall election aimed at Democratic Gov. Gavin Newsom moves closer to qualifying for the ballot this year. (AP Photo/Jae C. Hong,File)

The last time San Diego elected a moderate Republican mayor with strong potential for appealing to voters statewide, it was Pete Wilson, a onetime state assemblyman who later won election to the U.S. Senate and two terms as governor.

Faulconer hopes to take a page from the playbooks of both Wilson and ex-Gov. Arnold Schwarzenegger. Like Wilson, he’s busily purveying a message of moderation and effectiveness. Like Schwarzenegger, he hopes a recall can propel him to the next level of politics.

With Faulconer as mayor, San Diego was the largest American city with a Republican governor. Now, the other major GOP figure planning to be on the recall list, John Cox, has devoted the recall season’s first major TV commercial to blasting Faulconer. Cox, a big loser to Newsom in 2018, knows who his main threat is this time.

Faulconer has sometimes sought to downplay his Republican identity in this state where the GOP label has lately meant certain defeat for anyone seeking statewide office other than the movie muscleman Schwarzenegger.

Some Republicans hope Faulconer can rescue them, giving California a Republican very different from the hugely unpopular (in California) President Trump.

But Faulconer sometimes makes moves that belie his image as a moderate.

One came in January, when he endorsed former U.S. Rep. Darrell Issa to replace the disgraced and resigned San Diego Republican Duncan Hunter in a Mexican-border congressional seat. Issa, hardly a moderate, “retired” in 2018 from his former seat in north San Diego County when the district became too liberal for him to expect reelection. The Hunter district leans far more to the right.

Faulconer took some risk in endorsing Issa, a persistent harasser of ex-President Barack Obama while Issa chaired the House Government Operations Committee through much of the last decade.

Then there was an appearance by Trump on Fox News last June, just after Faulconer visited the Oval Office. “(Faulconer) was just in my office, great guy,” Trump said. “He came up to thank me for having done the (border) wall because it’s made such a difference. He said it’s like day and night; he said people (had been) flowing across and now nobody can come in.”

Faulconer quickly denied saying any of that, his office claiming he and Trump discussed only a trade deal. For sure, Newsom can use the Fox News tape against him, and never mind Faulconer’s denial.

But Faulconer hopes to win over more voters with another move than he might lose with any of that.

Besides his own campaign, he plans to sponsor a statewide ballot initiative on the homeless issue aimed for the 2022 election, claiming San Diego has had more success on this than other large cities.

Faulconer wants the still-unwritten measure to make it easier for cities and counties to “encourage” homeless individuals to accept psychological treatment and shelter beds. He also wants to roll back some laws like the winning Propositions 47 and 57, which reduced penalties for drug use and crimes like thefts and car burglaries valued under $950.

“California has lost its way on homelessness,” he said in a speech. “We have to speak the truth about what causes homelessness (referring to drug addiction and mental illness, as well as high rents and home prices).”

That dropped his city’s homeless count by 9 percent in 2019, Faulconer said, the only significant city in California with any reduction.

Faulconer’s stances on many things almost replicate Schwarzenegger’s, and Schwarzenegger remains the only Republican elected statewide since 1998. But he was a famed movie star and Faulconer is neither famous nor an actor.

So the jury remains out on the mayor’s statewide political viability. But so far, despite Cox’s claim to the contrary, the state GOP has no better hope.

If Trump founds a third party, as he has threatened to do, it would only hurt the beleaguered California GOP, columnist Tom Elias says.

Newsom isn't looking forward to a recall, but it might be the best thing to happen to him, columnist Tom Elias says.

Policy makers are only beginning to open their eyes to the possibility of using vacant office space for housing, columnist Tom Elias says.

Republicans made gains in the 2020 congressional races, but redistricting and Donald Trump may reverse those gains in 2022, columnist Tom Elias says.

Thomas D. Elias: Feinstein: To retire or not? That is the question

Thomas D. Elias: Criminals or victims: Who should justice serve?

It should have come as no surprise that lots of people want the vaccines, columnist Tom Elias says. Why didn't the state see it coming?

Thomas D. Elias: Memo to the restless: Think twice before heading to Texas

Lots of Californians who fled to Texas are learning a hard lesson on why life down there is so cheap, columnist Tom Elias says.

The state Supreme Court appears poised to thwart the will of California voters on the cash bail system, columnist Tom Elias says.

FILE - In this Feb. 2, 2021 file photo former San Diego Mayor Kevin Faulconer speaks during a news conference in the San Pedro section of Los Angeles. Faulconer announced he is entering the race for California governor, the first major Republican to formally step into the contest while a potential recall election aimed at Democratic Gov. Gavin Newsom moves closer to qualifying for the ballot this year. (AP Photo/Jae C. Hong,File)