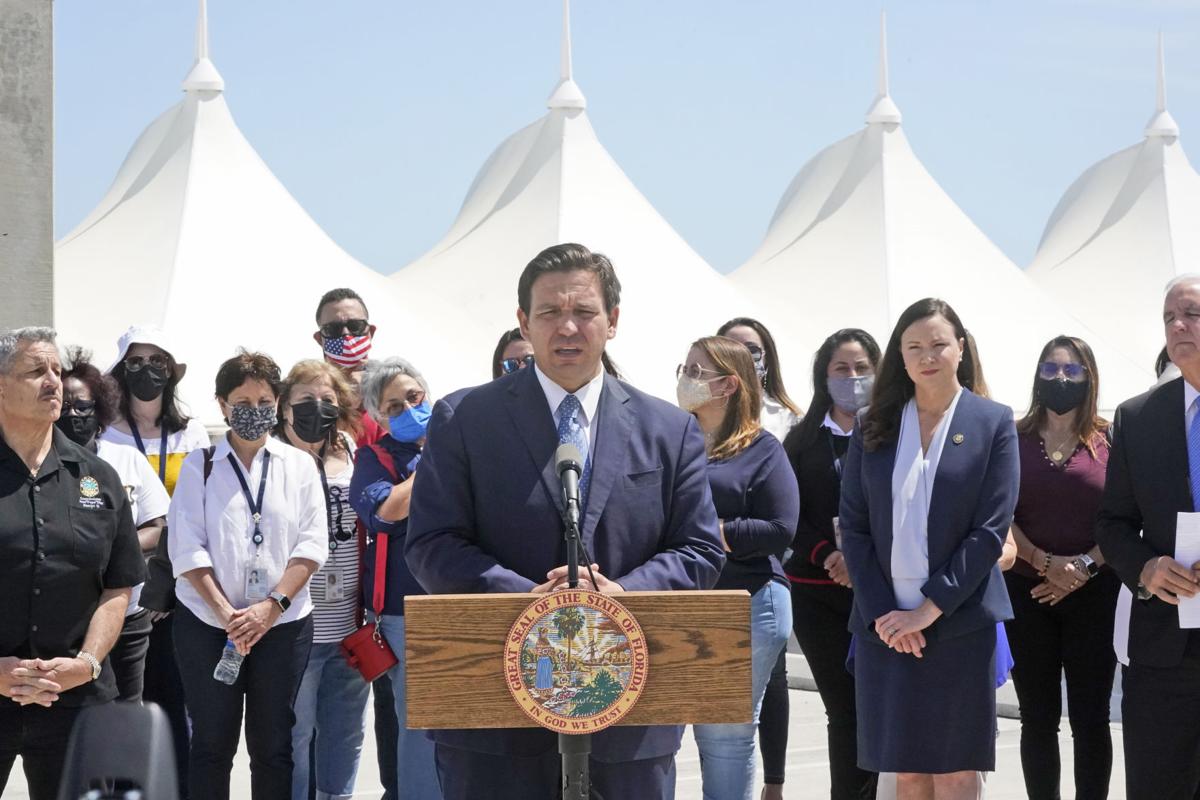 Florida Gov. Ron DeSantis, center, speaks during a news conference surrounded by officials and cruise workers, Thursday, April 8, 2021, at PortMiami in Miami. DeSantis announced a lawsuit against the federal government and the CDC demanding that cruise ships be allowed to sail. (AP Photo/Wilfredo Lee)

Where would you rather be during the still-ongoing coronavirus pandemic, which earlier saw Americans die by the thousands each day for many months? Florida or California?

If they could choose today, almost 4,000 now-deceased Floridians might pick California.

It’s true those folks would have had to pay state income tax had they lived in California, as opposed to Florida, which has no such levy.

But they’re no longer among the living, thanks to the virus or its consequences.

A comparison is very relevant today as Republican interests that funded and worked to qualify a vote on recalling California Gov. Gavin Newsom continually insist Florida Gov. Ron DeSantis should be a prime candidate for president if Donald Trump does not try for a second term in 2024.

They may not have looked at the latest contrasts between wide-open Florida and still somewhat closed California, set to reopen substantially more on June 15. Numbers from the week between April 1 and April 8 can be instructive here. Florida, with about half California’s population, had 37,293 new Covid cases during that week to California’s 17,366. Its death rate also topped California’s, at 157 per 100,000 persons to 148 per 100,000. On one day during the following week, Florida recorded more than 6,400 new cases to California’s 1,200-plus. So who is managing the pandemic better, Newsom or DeSantis?

Meanwhile, if Newsom beats the recall and then is reelected next year, he will surely be touted as a prime prospect for the Democratic nomination the next time that slot opens up – perhaps in 2024 or 2028.

For both men, handling of the pandemic’s onslaught has become a prime issue determining their ultimate potential to lead the nation.

Newsom was the first governor to shut down his state, ordering a lockdown in mid-March 2020 soon copied in myriad other places. DeSantis never issued a full stay-home order. Similarly, while California has required masking to stem COVID almost from the start, Florida requirements have been spotty, the only actual masking orders issued by city and county officials in a few places.

To understand any comparison, it’s important to note that California has almost twice as many people as Florida, 39.985 million compared with 21.48 million Floridians at last count.

California has seen a somewhat lower percentage of its populace perish during the pandemic, especially lately. In actual numbers, figuring for the states’ population differences, the figures amount to almost 4,000 more Florida deaths than would have occurred if that state performed just like California.

This was despite natural advantages Florida’s far more humid climate provides: Several studies suggest that aerosol droplets emitted when humans breath, talk or sing fall to the ground much faster in humid air than in a drier climate.

DeSantis celebrates that he kept schools open through the pandemic, while most were closed in California. But the 1.5 million more elderly persons here could have fared far worse had California stayed as open as Florida.

The question: Were the lives saved here by using Newsom’s tactics rather than those of DeSantis worth extra sacrifices by other age groups?

That’s essentially being debated right now in the recall drive, where Newsom is roundly criticized for keeping businesses and schools shuttered longer than many found comfortable, even though teachers and school districts often have the last word on reopening.

The bottom line on all this is that both governors operated from basic instincts and principles: Newsom placed lives saved above all else while DeSantis wanted to save lives, too, but not if his state’s economy suffered beyond his supporters’ comfort level.

In both cases, the governors accomplished their goals. Newsom kept California in 29th position among the states when it came to death rates, even while its climate and senior populace could have pushed fatalities much higher without the strategies he employed. DeSantis kept his state at 25th, fatalities never mounting to levels threatening to his political future.

Their contrasts in philosophy and the results will be remembered, especially if these two eventually oppose one another for the presidency.

Florida Gov. Ron DeSantis, center, speaks during a news conference surrounded by officials and cruise workers, Thursday, April 8, 2021, at PortMiami in Miami. DeSantis announced a lawsuit against the federal government and the CDC demanding that cruise ships be allowed to sail. (AP Photo/Wilfredo Lee)