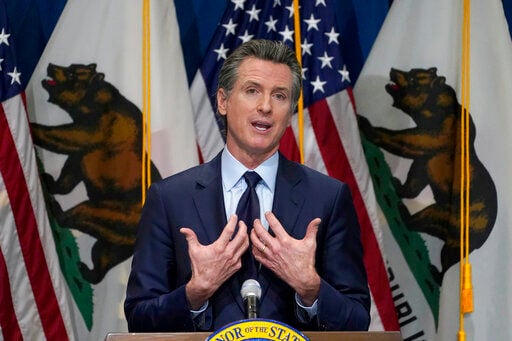 FILE - In this Jan. 8, 2021, file photo, California Gov. Gavin Newsom gestures during a news conference in Sacramento, Calif. Gov. Newsom is facing the possibility that he could be removed by voters in a recall election later this year, in the midst of his four-year term. (AP Photo/Rich Pedroncelli, Pool, File)

Gov. Gavin Newsom’s notorious foot-in-mouth problem may be his worst enemy as he faces the recall vote that will likely be scheduled for this fall.

No, it will probably not cost him his job, as intended by the Donald Trump supporters and anti-vaxxers who started the recall and the more standard conservative Republicans who jumped on their bandwagon.

But it is giving him problems. The governor who told Californians not to gather in groups of more than 10 and not to do even that indoors — and then attended an infamous somewhat larger indoor birthday dinner for a lobbyist pal — keeps making new gaffes.

One came in mid-March when he described himself as a “Zoom parent,” while his four children had been back in their private school classes for months.

More serious was his pledge that if the 87-year-old longtime U.S. Sen. Dianne Feinstein leaves office for any reason before her term is up after 2024, he will appoint a Black woman to the job.

This was in response to entitled-feeling Black women politicians who did not find any of their number named to the Senate seat vacated by Kamala Harris when she became vice president. They felt slighted and whined that now there are no Black woman in the Senate.

It did not appear to occur to them that this was because the Senate’s only Black woman had just received a big promotion and that no other Black woman had managed to win any other Senate seat. To make up for that, and to satisfy their craving always to have at least one of the number in the upper house of Congress, they pressured Newsom to appoint one of them at his first opportunity.

This was the essence of identity politics, where a person’s ethnic and gender background counts for more than their ability or achievements. The reality is that no one group owns California’s Senate seats. They have at times gone to the son of an Irish-American heavyweight boxing champion, two Jewish women, an Asian-American semantics expert, a onetime movie soft-shoe dancer, a former presidential press secretary, a Latino graduate of MIT and a variety of others.

Most of these folks won the job on their own, but a few were appointed, and appointees often don’t fare well in elections when they finally roll around. Think of appointed Republican John Seymour, a former Orange County state senator who gave way to Feinstein in 1992.

But Newsom’s bow to identity politics didn’t help him, not especially after Feinstein pointedly asserted she has no plans to go anywhere and thus forced the governor to awkwardly try pulling his foot from his mouth.

What Newsom did is sometimes called pandering. It’s difficult to put that tag on his appointment of former California Secretary of State Alex Padilla to the Senate because — besides being an old Newsom friend — Padilla has a long record of achievement, most recently setting up the state’s universal mail voting system which worked with few flaws in the last election.

But his pandering to Black women-led Asian-American groups to push him to name one of their number to replace Xavier Becerra as state attorney general now that he’s the national secretary of Health and Human Services.

For Newsom to achieve the unity he seeks among Democrats as he fights the drive to recall him, he must go cold turkey on his impulse to pander.

If he’d simply pledge to name the individual he believes will do the best job to any vacant post, he would be much better off. It’s difficult to be offended by someone trying to find the best public servant possible, but easy to turn against someone more interested in identity than merit.

Newsom has enlisted the likes of Sens. Bernie Sanders and Elizabeth Warren as part of his effort to present a unified Democratic front and lend credibility to his campaign to label the upcoming vote a “Republican recall.”

But if he keeps turning off Democrats by turning one group after another against him because he didn’t pick someone for a top job who looks just like them, he could have more trouble this fall than he now expects.

Historical revisionists are hard at work today, not just in California but all over America, columnist Tom Elias says.

Thomas D. Elias: This recall could become Newsom vs. Trump

FILE - In this Jan. 8, 2021, file photo, California Gov. Gavin Newsom gestures during a news conference in Sacramento, Calif. Gov. Newsom is facing the possibility that he could be removed by voters in a recall election later this year, in the midst of his four-year term. (AP Photo/Rich Pedroncelli, Pool, File)