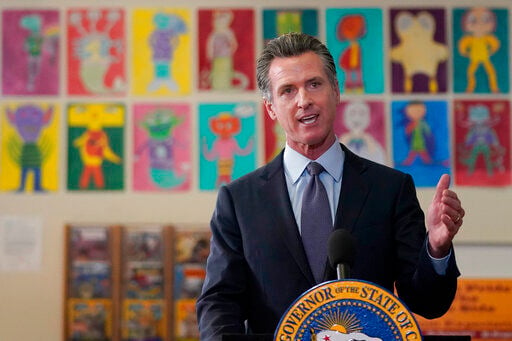 Two months ago, California was in the middle of the pack among states when it came to per-capita COVID-19 caseloads and death rates. The same for its vaccination rate.

Then this concept sunk in: It was time to tax the unvaxxed. This meant higher payments for the unvaccinated populace in some cases; many companies — for just one type of “tax” — compelling unvaccinated employees to pay more for group health insurance than those who are fully vaccinated because COVID hospitalization costs were endangering the insurance plans.

But it’s not just money that’s moving the California numbers. It’s also threats to careers, promotions and basic livelihoods, forms of taxation not easy to measure with cash numbers.

The idea took hold not merely among government agencies, many of which set deadlines for their employees to get vaccinated, some making vague threats against recalcitrant vaccination delayers or refusers.

The San Diego Police Department is one of these. As many citizens expressed reluctance to interact with unvaccinated officers, the department had to do something.

It set a Dec. 1 deadline for officers to be vaccinated unless they can demonstrate a legitimate religious objection or medical reason not to be inoculated, or else. With no significant organized religion in California objecting to vaccination (even Christian Scientists are going along), it will be difficult to establish a religious objection.

The department has not yet said what “or else” means; the implication is that firing is a strong possibility. Yes, there are other police agencies in San Diego County not yet being so tough, but there’s every reason to believe they will have to get that way if they expect to face and serve a cooperative citizenry.

Then there was the state’s Sept. 30 deadline for all health workers to be fully vaccinated or lose their jobs, unless they had a verifiable medical excuse.

This one seemed like a no-brainer since health workers from doctors and nurses to in-home providers like traveling physical therapists deal regularly with patients who already have weaknesses that the virus has no compunction about exploiting.

Since the deadline was announced, health care systems from Los Angeles to San Francisco and Sacramento now show employee vaccination rates well above the statewide percentages.

The Sacramento Bee reported the other day that the area’s three largest health care systems — Kaiser Permanente, UC Davis Health and Sutter Health — boasted employee vaccination rates of 97 percent, 100 percent and 91 percent respectively. Those numbers are far ahead of statewide vaccination figures and significantly higher than the health systems reported before deadlines were imposed and shots made easier to get.

Nursing home employees are also affected. One reason nursing home casualties were so high at the peak of the pandemic was that staffers brought the virus with them when they went to work. But vaccination rates are climbing among them now, with caseloads in nursing homes declining commensurately.

Then there are public schools, where the probability is high for a state mandate that all teachers and others who come into contact with students will soon have to be vaccinated if they want to stay in their jobs. COVID vaccines are already part of the required panoply of inoculations kids over 12 must get before they’re eligible for school, public or private.

When the federal Food and Drug Administration approves the vaccines for children aged 5 to 12, they will be added in. So there’s every indication the Delta variant of the virus that has struck hard at the young can be defeated, or at least reduced to flu-like manageable proportions.

All this is happening here, and not in places like Florida and Texas because officials here have not let themselves be hindered by shibboleths that hold down vaccination rates there and in other states with similar COVID-denying officials.

And reluctant professional basketball players like Andrew Wiggins of the Golden State Warriors may not have liked the idea of getting vaxxed, but the realization he would not otherwise be allowed to practice or play in California convinced Wiggins. His “tax” for staying unvaxxed could have amounted to more than $10 million, a pretty good-sized levy and a strong motivator.

The bottom line: Taxing the unvaxxed has worked, is working and will work.